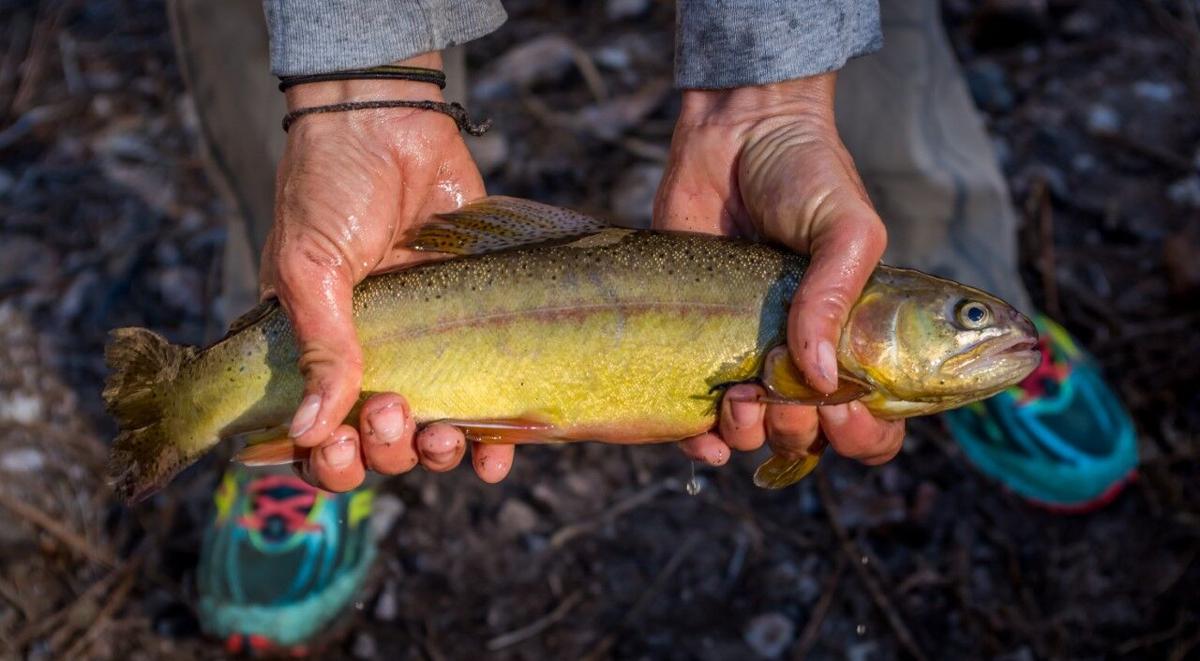 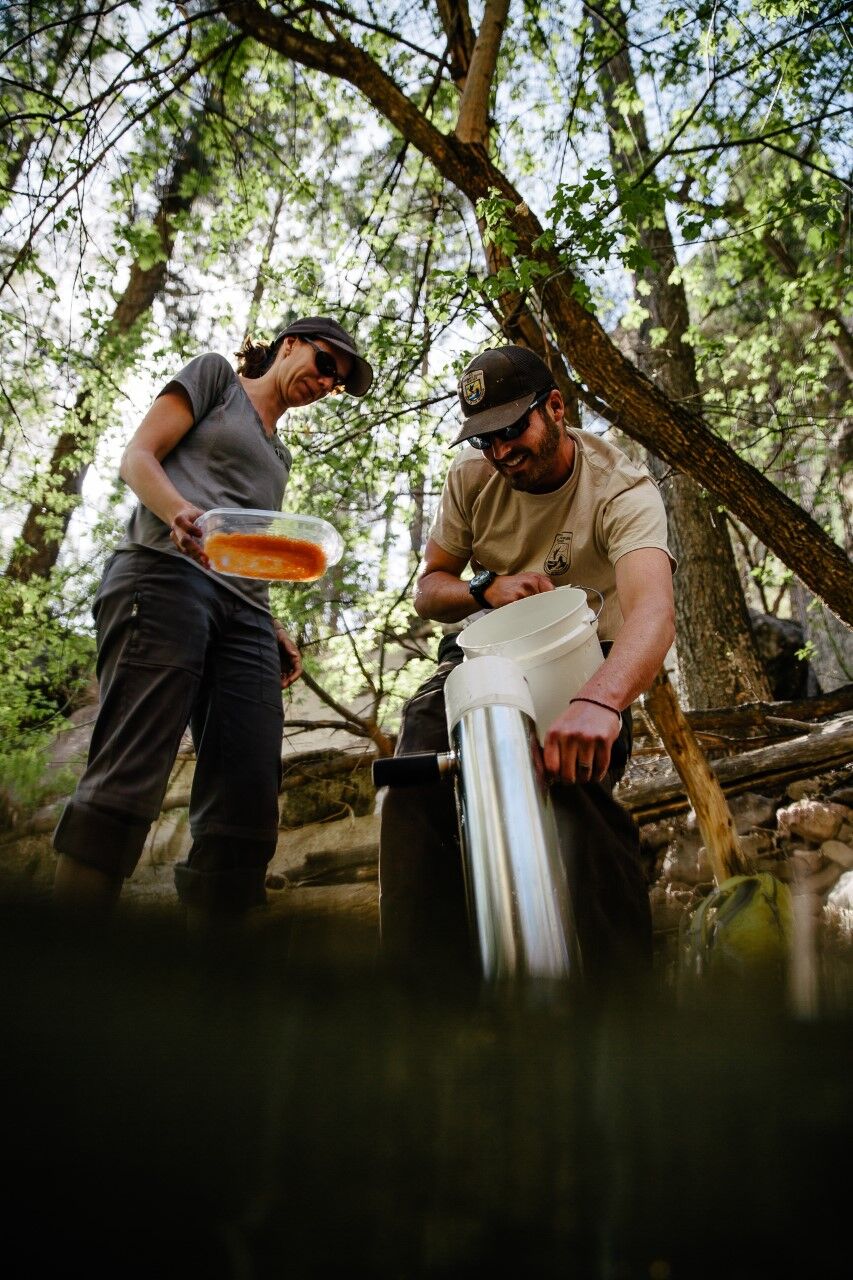 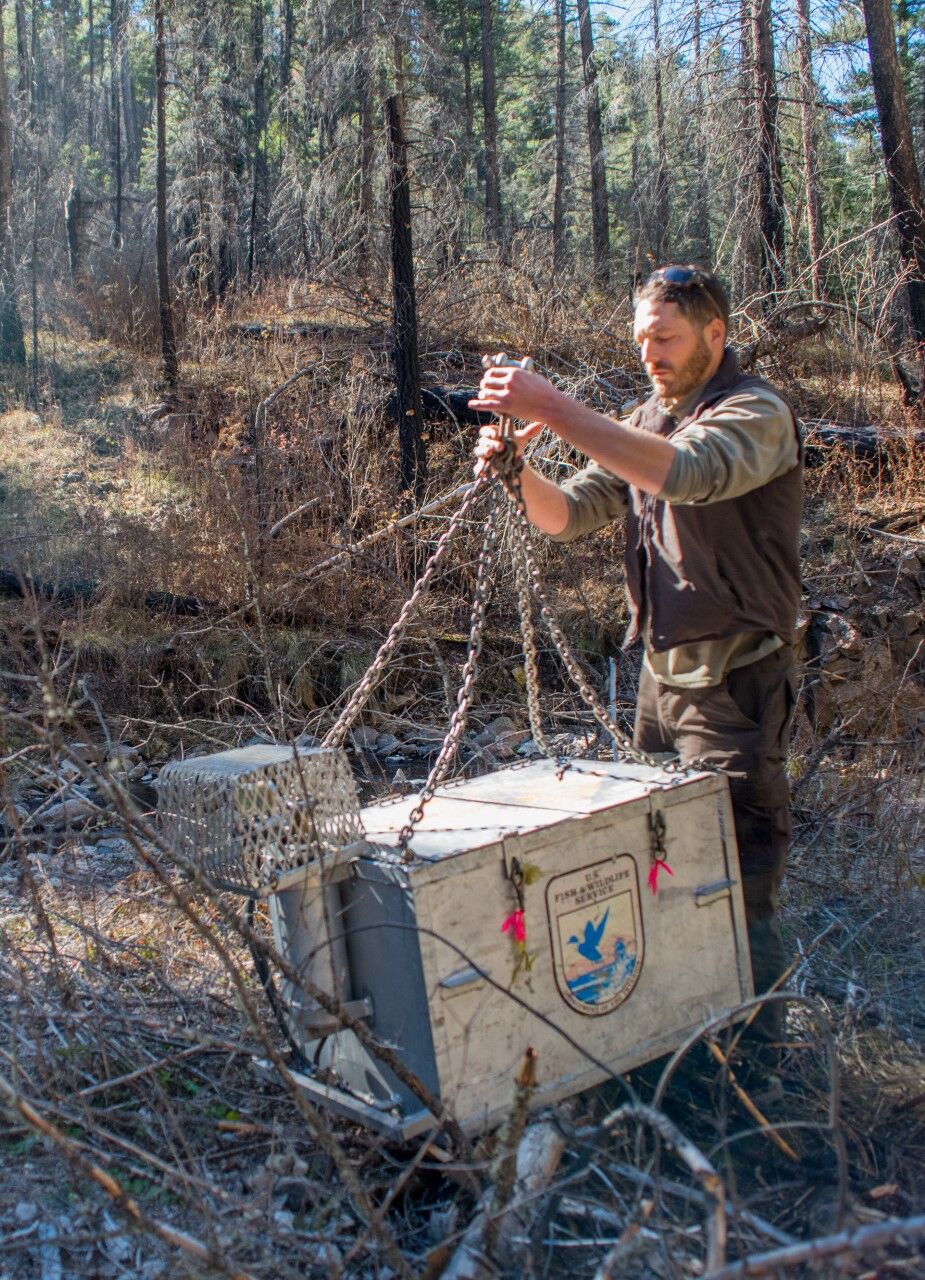 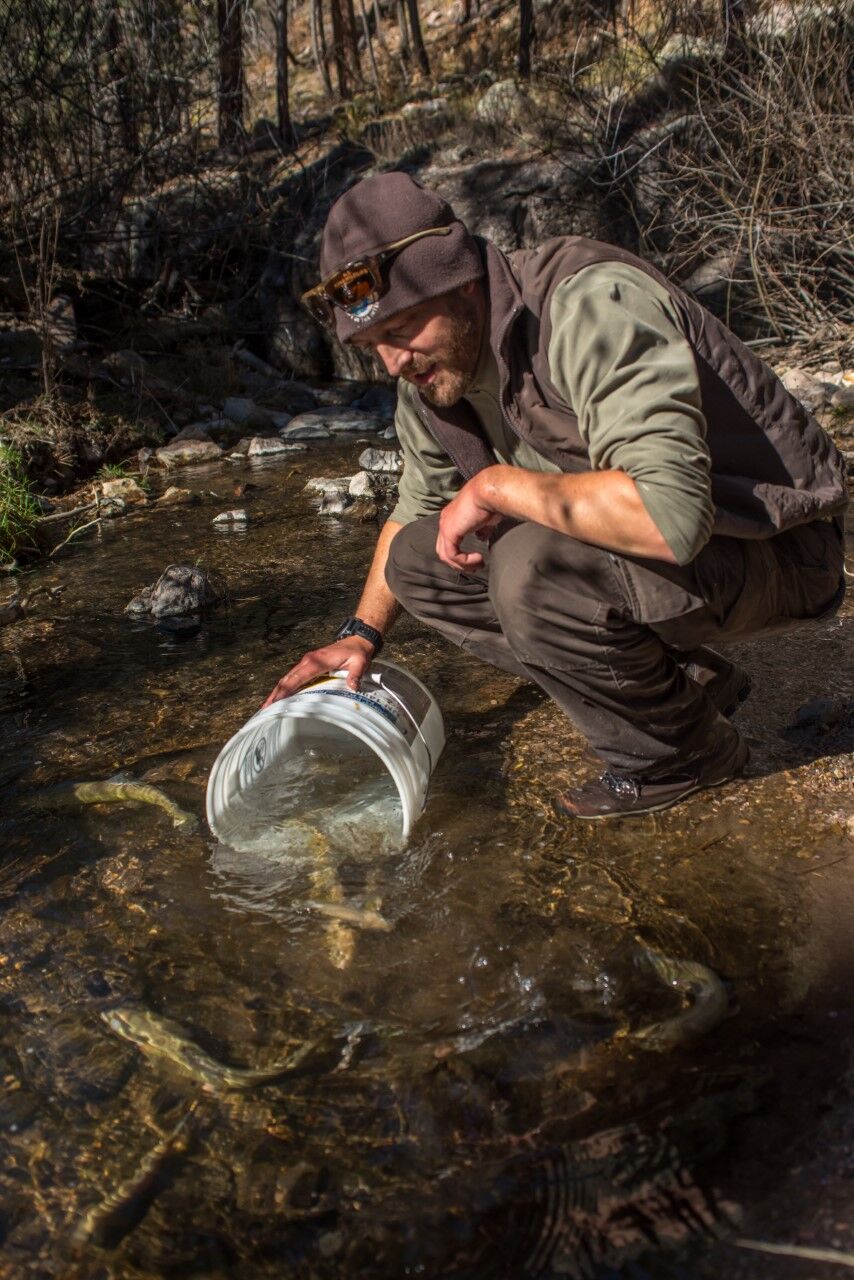 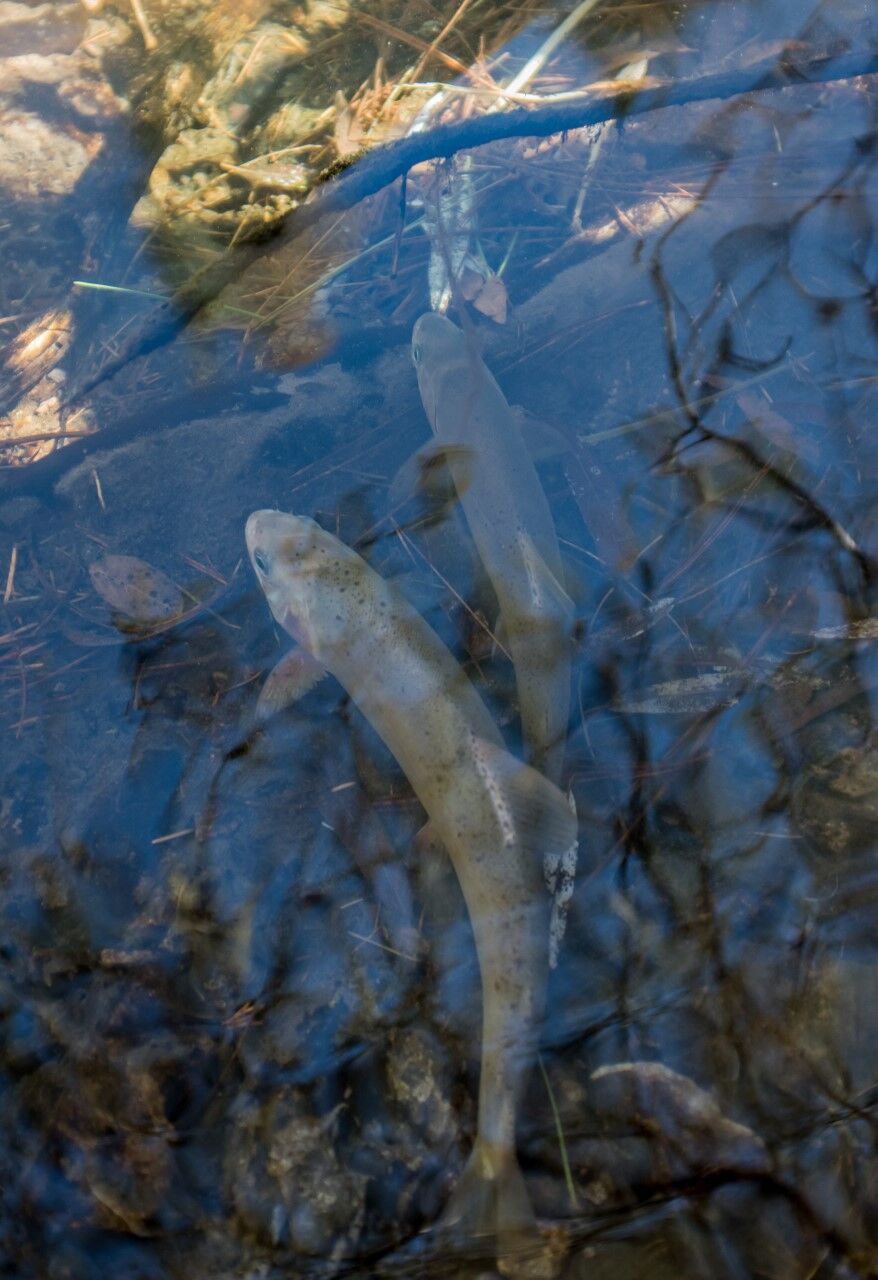 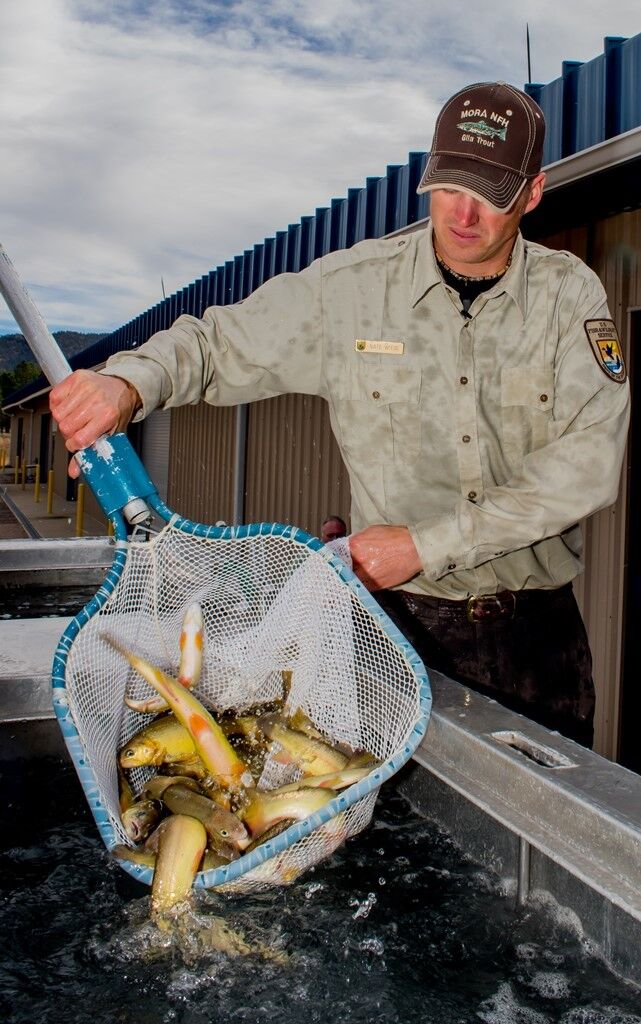 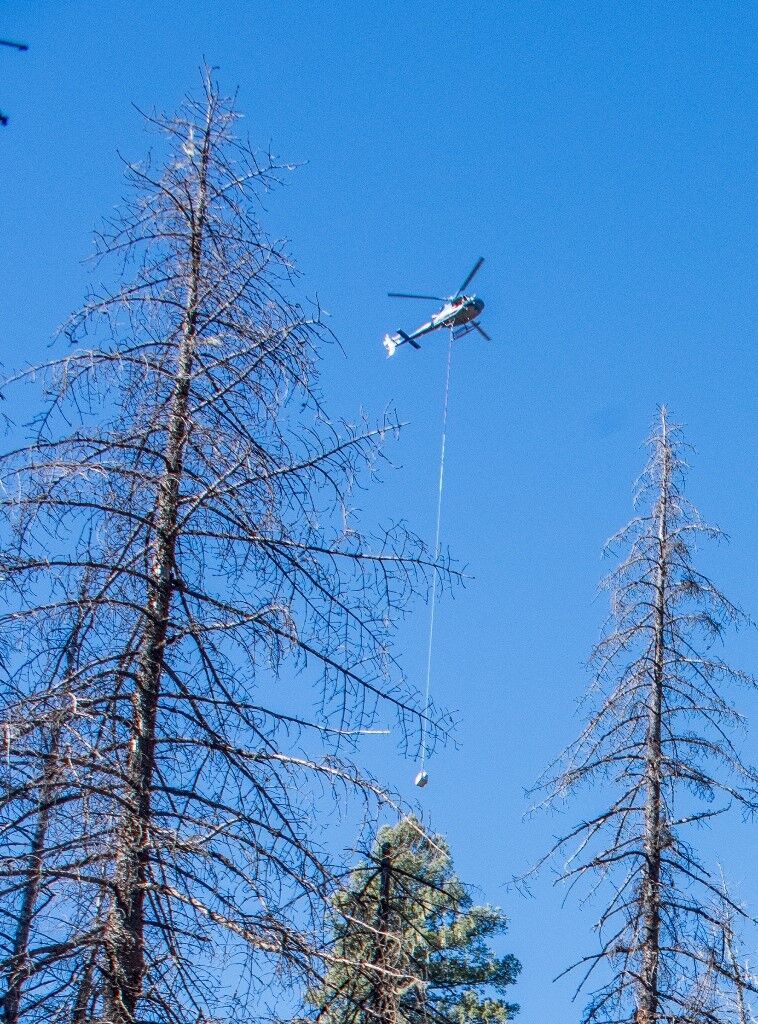 Gila trout arrive in an aerated tank at the treetops over Mineral Creek in the Gila National Forest. 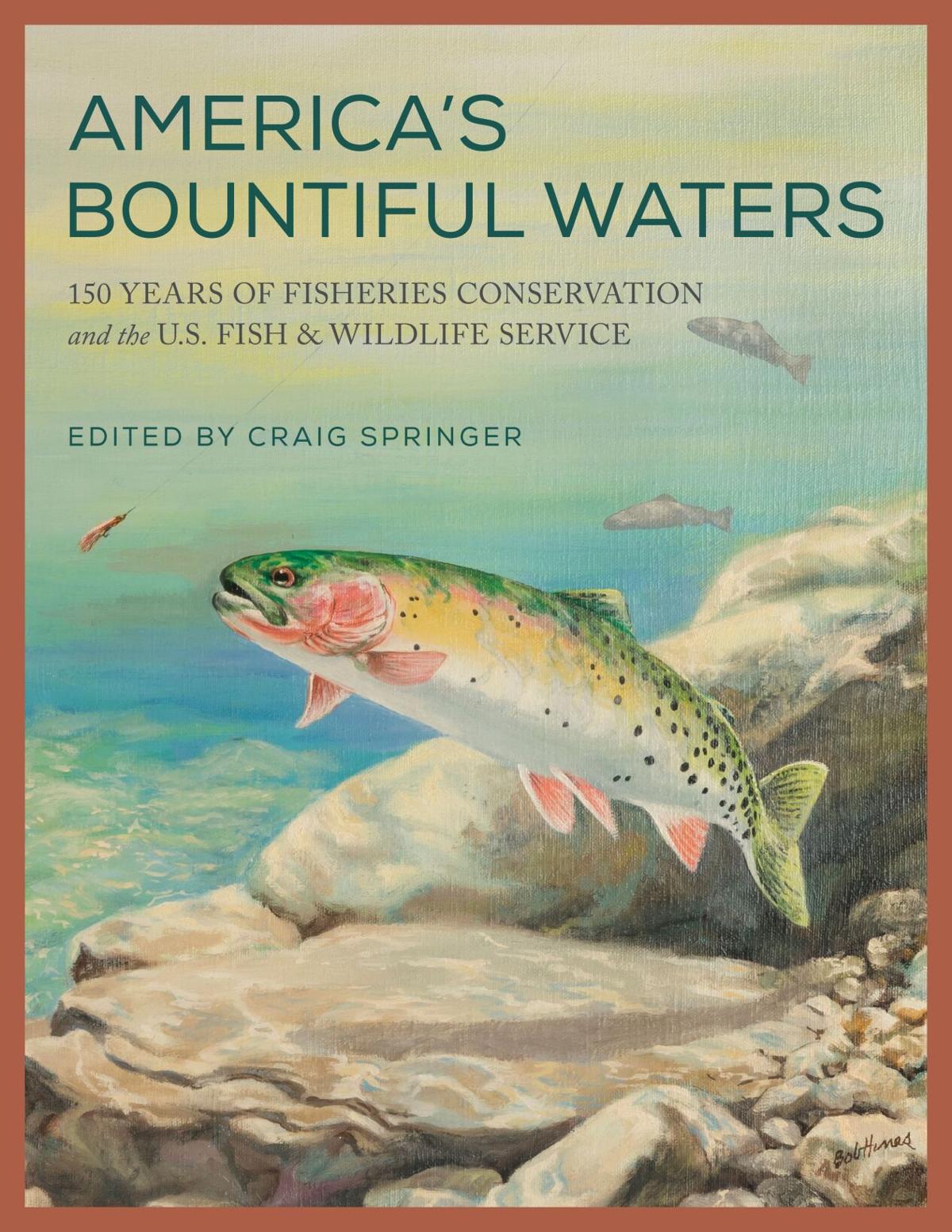 Gila trout arrive in an aerated tank at the treetops over Mineral Creek in the Gila National Forest.

This article is an excerpt from America’s Bountiful Waters, a recently published book edited by Craig Springer.

The distinct thump, thump, thump of helicopter blades awoke me from a dead slumber. It took a minute to recoup my bearings and remember why I was buried under two sleeping bags. I hadn’t bothered to pitch a tent the night before; a thousand stars above had been my weather forecast. But the crisp November night had the twinge of winter setting in; 5,000 feet of elevation pushed the mercury below freezing but made for incredible stargazing in one of the darkest nightscapes of the continental United States.

I grinned. As sleep finally cleared, I caught sight of the helicopter making steady progress toward my camp in southwest New Mexico. It was going to be a good morning.

I found Gila trout four years before this morning. I’d left the Clearwater River of northern Idaho to get there. It was home to some of the largest steelhead in the Columbia River basin that power through 500 miles of river to their spawning grounds. I packed my wife and two baby daughters for the 1,200-mile journey south to New Mexico — arriving as the manager of Mora National Fish Hatchery. It was, at the time, the only hatchery in the world rearing Gila trout.

It’s hard to describe a national treasure — and Gila trout are just that. A spawning Gila trout is a sight to behold. Gold flanks are speckled with fine pepper along the dorsal. Closer examination reveals hinting of a crimson slash — a throwback from their ancestral split from rainbow trout 1.3 million years ago. Under it all, the leading edge of white-tipped fins develop rippling akin to the edging of fine lace.

Gila trout aren’t just spectacular to behold, they are a story that captivates the imagination of wild places and wild things. It’s hard to decipher when Gila trout were first discovered. Early written accounts from settlers in the 1800s describe so-called mountain trout, speckled trout and Gila chubs. Trapper James Ohio Pattie in his storied sojourn through the Southwest in 1823 wrote of catching fish in the Gila River near its forks. Pattie remarked that he tossed the fish into an adjacent thermal spring and they would cook in six minutes. Were these Gila trout? Could have been. These now rare trout wouldn’t be given a scientific name until 1950.

Native only to the Southwest, Gila trout thrive in an impossible place: a desert where annual rainfall rarely reaches 10 inches and rivers routinely go bone dry. It makes its home a mile above the sea level in harsh canyons beneath expansive skies.

It’s here that U.S. Forest Service forester Aldo Leopold first visited in 1908 and described a pristine landscape. By 1921, overgrazing and prolonged drought devastated the land. The Gila trout were gone — pushed only to the extreme headwaters of the Mogollon Rim that arc through Arizona and New Mexico. Small streams veining off the Blue Range and Black Range held the last vestiges of Gila trout. In 1924, with Leopold’s urging, the Gila Wilderness became the first designated wilderness in the world. One would have thought that designation would have protected Gila trout in perpetuity. However, an onslaught of non-native rainbow trout hybridized all but the last remaining Gila trout.

Early conservation efforts by the New Mexico Department of Game and Fish included hatchery production in the 1920s at Jenks Cabin. But the Gila trout proved difficult to raise in confined environments, and the effort was abandoned. Populations continued to hang on, but by a narrow thread.

The New Mexico Department of Game and Fish banned fishing for Gila trout in the 1950s, and by 1966 the Gila trout were designated endangered under the Endangered Species Act. It took 40 years of conservation work before the trout were downlisted to threatened in 2006, when the population reached an estimated 37,000 fish. The new designation opened select streams to limited Gila trout angling for the first time in 50 years.

Anglers find the Gila trout a willing participant to almost any offering presented. They inhabit mostly small streams where stealth is imperative. An errant shadow lurking over a likely hole will send these small trout scattering. You’ll be hard-pressed to win a distance casting contest in Gila trout country, but creatively threading flies or bait through a tangle of streamside willows onto a glassy pool will often be rewarded.

Gila trout aren’t large in the remaining habitat they occupy. Despite decades of conservation work, they remain prisoners of the highest mountain streams from 5,000 to 10,000 feet in elevation. Below these highest snow-fed lifelines, rainbow trout wait to court them, washing away a million years of species differentiation by hybridization. Past that, the rivers have already succumbed to the warming climate. Snowpacks have declined precipitously, and summer temperatures push well beyond the 68 degrees that Gila trout prefer.

Gila trout mature at 3 years. With unlimited resources and warm overwintering habitat, that fish could reach 20 inches. However, in most cases, a mature Gila trout will be a dainty 8 inches. What they lack in size, they make up for in sheer determination. Females will carve redds — spawning beds — from the stream beds in April, and males will dart in and out for her attention. All of this occurs in water just over ankle deep.

I unzip my sleeping bag as the helicopter prepares for landing and I reflect on this journey. This past spring, I stood over an incubator tray of Gila trout eggs — 40,000 eyeballs staring back at me. Mora National Fish Hatchery experienced a record-breaking spawning season for a fish that has defied the odds.

I’ve brought 500 of these fish with me this cold morning. They’ve grown almost an inch a month in the hatchery with unlimited food and ideal water conditions. I put the 5-inch Gila trout on the truck 24 hours ago as we waited for everyone to get into place and this helicopter to arrive. The last leg of their journey is a 20-minute flight into some of the roughest territory of the Gila National Forest.

Our fishery biologists spent half a day on mule and on foot to bushwhack through blow-down and burn scars to the banks of Mineral Creek, where they will receive the trout carefully lowered in a tank of cold water on a longline beneath the pulsing chop of helicopter blades.

Where to buy it

You can find America's Bountiful Waters wherever books are sold, including online retailers such as Amazon.

Beautifully written article about a natural wonder and a state treasure. Sometimes conservation efforts pay off, and the result is pure poetry. I've been up to those high mountain streams and caught a Gila trout on a fly. Sometimes it's enough to know they are still up there waiting for me.