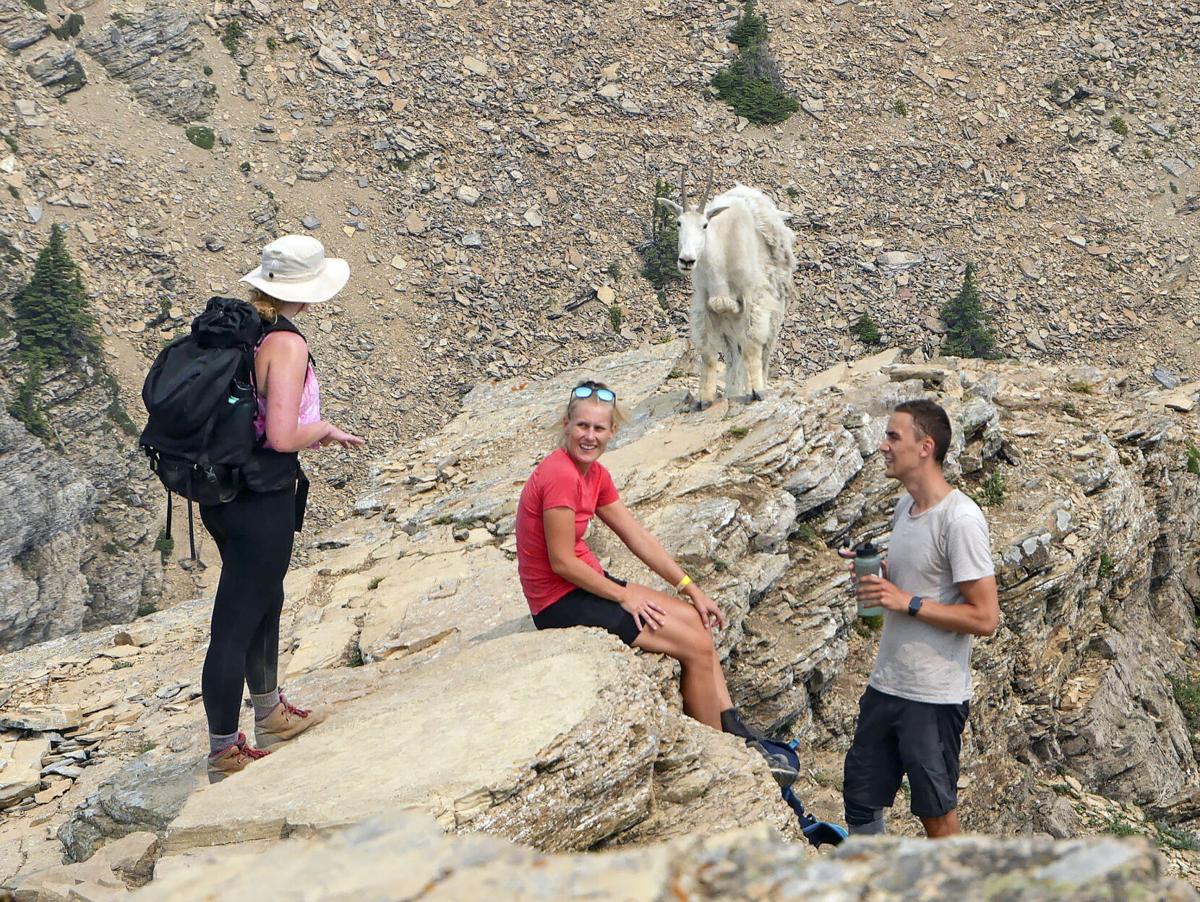 A mountain goat listens in on the conversation of a trio of hikers in July at Grinnell Glacier Overlook at Glacier National Park. 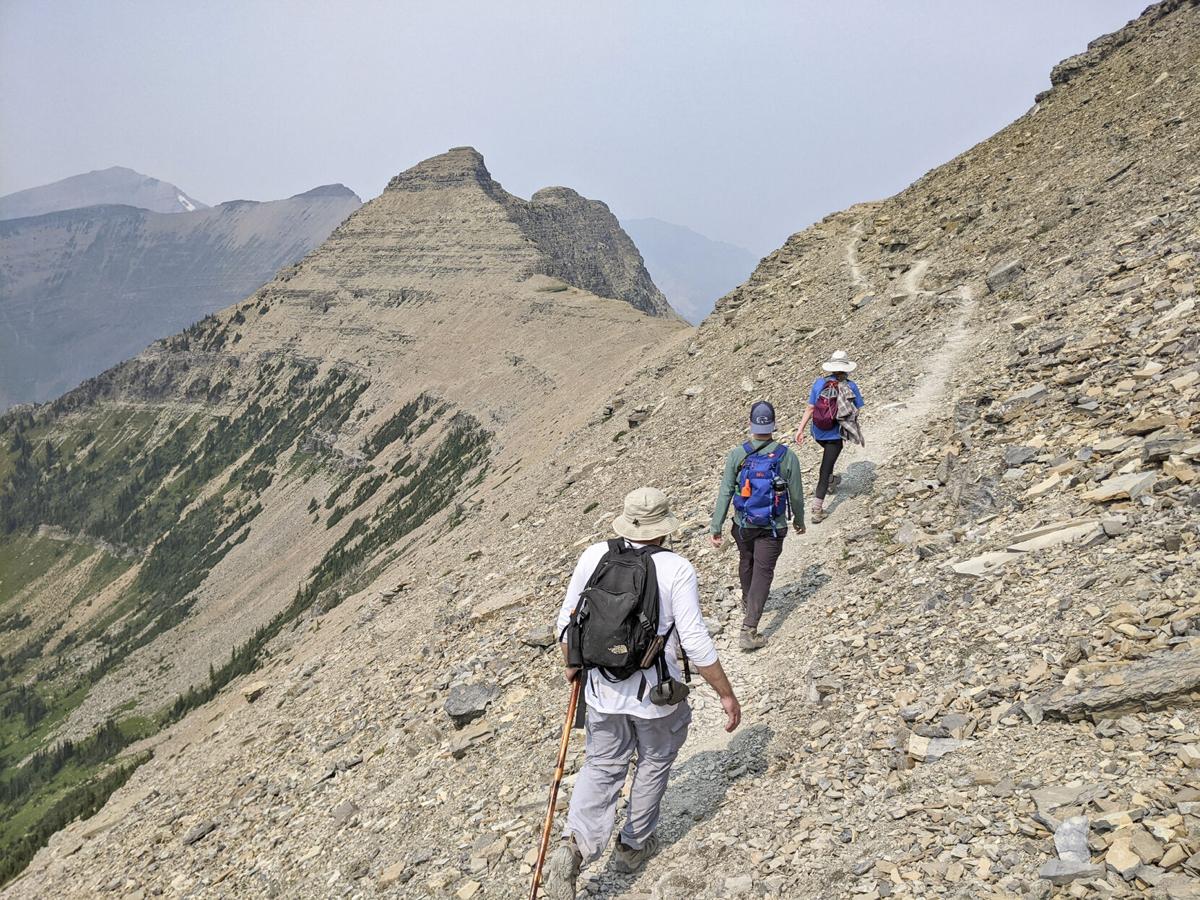 Hikers walk in July along the Continental Divide between Dawson Pass and Pitamakan Pass in Glacier National Park. 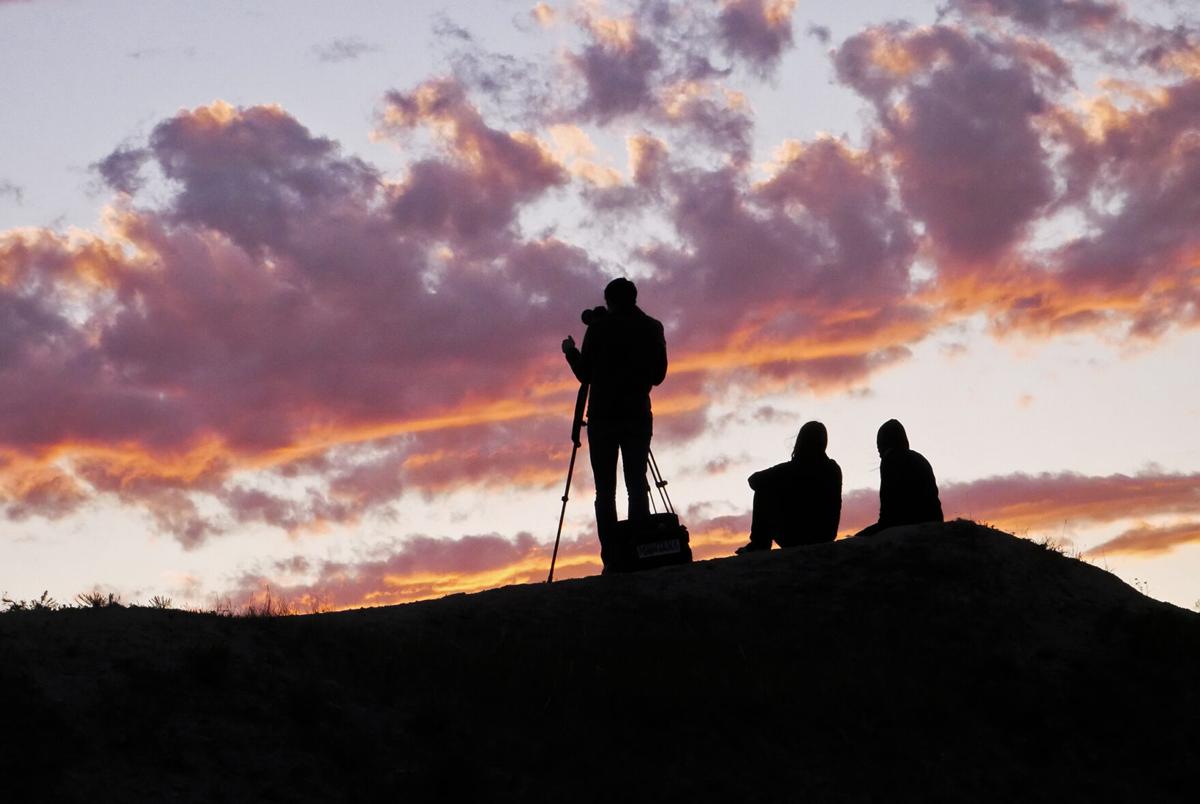 Friends take in the sunset at Badlands National Park in South Dakota.

We came together in communion near the shore of Pray Lake, the setting sun shimmering on the water and illuminating the surrounding peaks in a pink hue.

Strangers at the beginning of the day, we were friends by evening as we gathered next to a crackling campfire and pooled a collection of meager offerings we’d grabbed from our vehicles to cater an impromptu potluck.

At its largest, our group sported five members as we crossed over a pair of mountain passes in the smoky haze, ogling at jaw-dropping views of the Northern Rockies on what’s regarded as one of Glacier National Park’s most spectacular trails.

A Denver-based flight attendant traveling in a converted Prius camper; a middle-aged lawyer from St. Louis; a young husband and wife from Washington, D.C.; and a gangly journalist from Santa Fe formed our crew that shared stories and plucked huckleberries along the 18.8-mile Dawson-Pitamakan Loop.

It was the perfect way to spend my final day in Glacier while on my first excursion outside of New Mexico since the onset of the coronavirus pandemic. Day friends on a long day hike, we enjoyed learning of each other’s lives and discussing our adventures in the park over the past week.

We exchanged contact information at the end of the taxing trek, and three of us remained to share a jovial dinner at Two Medicine Campground before heading our separate ways.

Even in the most breathtaking of landscapes, it is often interactions with others that become the most vivid memories of a journey.

An act of incredible generosity, an inspirational story or an imparted piece of wisdom from a stranger are the unplanned encounters that resonate with you long after you return from a trip.

The great outdoors provide the perfect backdrop for such connections, where people are bonded by a shared passion of nature and open themselves up to new experiences as they explore unfamiliar lands.

Though I’m a shy introvert in most settings, I find that I come out of my shell on road trips when I’m camping and hiking my way around the country.

Conversation comes easily on the trail or at the campground, and a simple “howdy” can quickly evolve into an exchange of stories about who we are and where we’ve been.

There’s a passage from the Russian classic Dead Souls by Nikolai Gogol that I now think of whenever a chance meeting develops into a memorable interaction.

“For every man there are certain words that are as if closer and more intimate to him than any others. And often, unexpectedly, in some remote, forsaken backwater, some deserted desert, one meets a man whose warming conversation makes you forget the pathlessness of your paths, the homelessness of your nights, and the contemporary world full of people’s stupidity, of deceptions for deceiving man. Forever and always an evening spent in this way will vividly remain with you, and all that was and that took place then will be retained by the faithful memory.”

Most trips tend to have at least a loose itinerary a person sticks to along the way. As a frequent solo wanderer, it’s the “warming conversations” that arise out of the blue that offer the biggest surprises and rewards.

The most unforgettable encounter I’ve experienced on the road occurred at Great Sand Dunes National Park in Colorado in May 2017.

I was just kicking off a two-month road trip during which I’d planned to visit 15 national parks and several other natural wonders of the West. Already tired having spent the morning trudging up and down the tallest sand dunes in North America, a park ranger’s promise of a partially frozen waterfall tucked inside of a tall rocky crevice in the mountains had me hiking up a rough road exposed under the searing sun.

Worried about damaging my car at the beginning of my trip, I’d left it at the base of the rugged road and had to hike three miles to reach the trailhead. Several trucks and SUVs passed me as I panted my way up. About two miles in, a couple slowed alongside me and mercifully asked if I’d like a lift.

I gratefully accepted, rode with them and their dog Sophie to the trailhead, and told them about my planned road trip as we hiked together through a stream to reach Zapata Falls.

The cold water and the sight of the 30-foot waterfall at the end of a short tunnel revived my spirits. Little did I know, the kindness Mark and Lori would show me was just beginning.

They gave me a ride back down the road to my car, and before I got out, Mark handed me a piece of paper with his phone number on it. If I ever found myself near Durango, he said, give him a ring and I’d have a place to stay.

About five days later, I was heading from New Mexico up to Mesa Verde — 35 miles from Durango — and decided to call Mark to test his goodwill. He and Lori welcomed me into their home, let me do my laundry, fed me a delicious stir-fry dinner and gave me my first night in a bed in more than a week. The next morning, Mark bought me a huevos rancheros breakfast at a bakery before sending me off to see the cliff dwellings at Mesa Verde.

I choked up as we parted, unable to reciprocate their unbelievable generosity with anything other than words of effusive praise and gratitude.

Two years later, I stayed with Mark and Lori again as I made the move from Portland to Santa Fe to start my job at The New Mexican. We traded stories of our outdoor adventures, I showed them photos from my hikes, and they once again showered me with more kindness than I deserved.

My experience with Mark and Lori has made me become more open to the possibilities around me.

Not everyone will be as friendly as them, and you should trust your instincts if an interaction feels off. Those situations, however, tend to be few and far between.

I still love hiking alone. It allows me to give my full attention to my surroundings and feel truly immersed in nature.

But my favorite part of traveling has become connecting with strangers. I try to at least say “hello” to everyone I meet on the trail. On good days, I finish a hike with a new friend.

Wonderful article that resonates and touches my heart. To many more divine encounters!