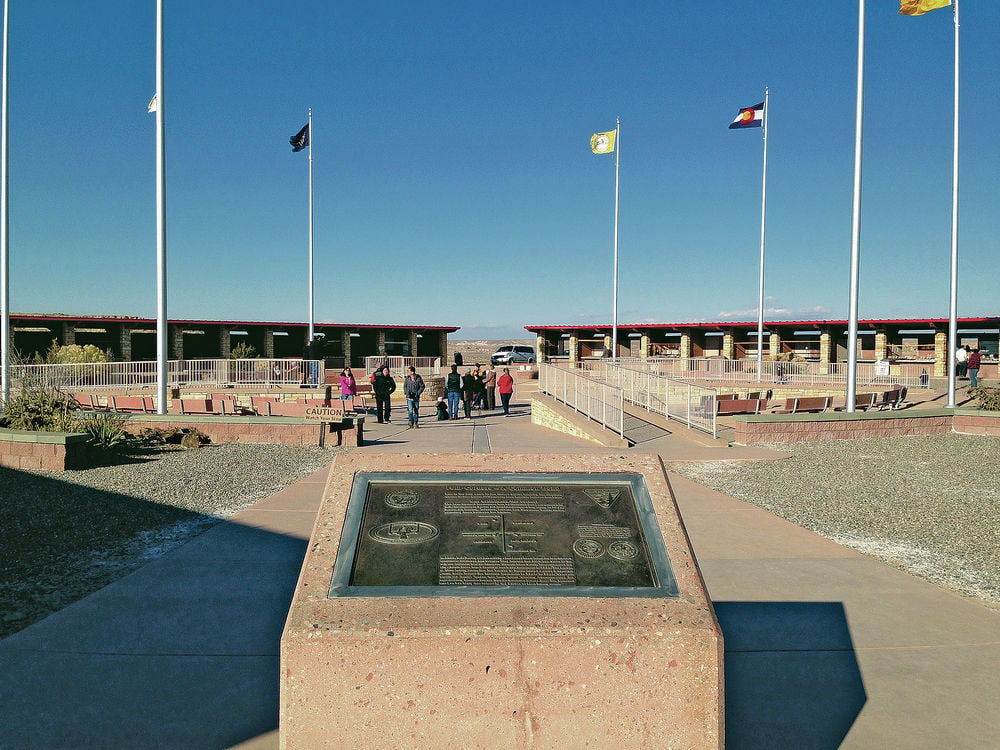 The monument has changed significantly over the years, growing from an unprotected sandstone monolith to what it is today. 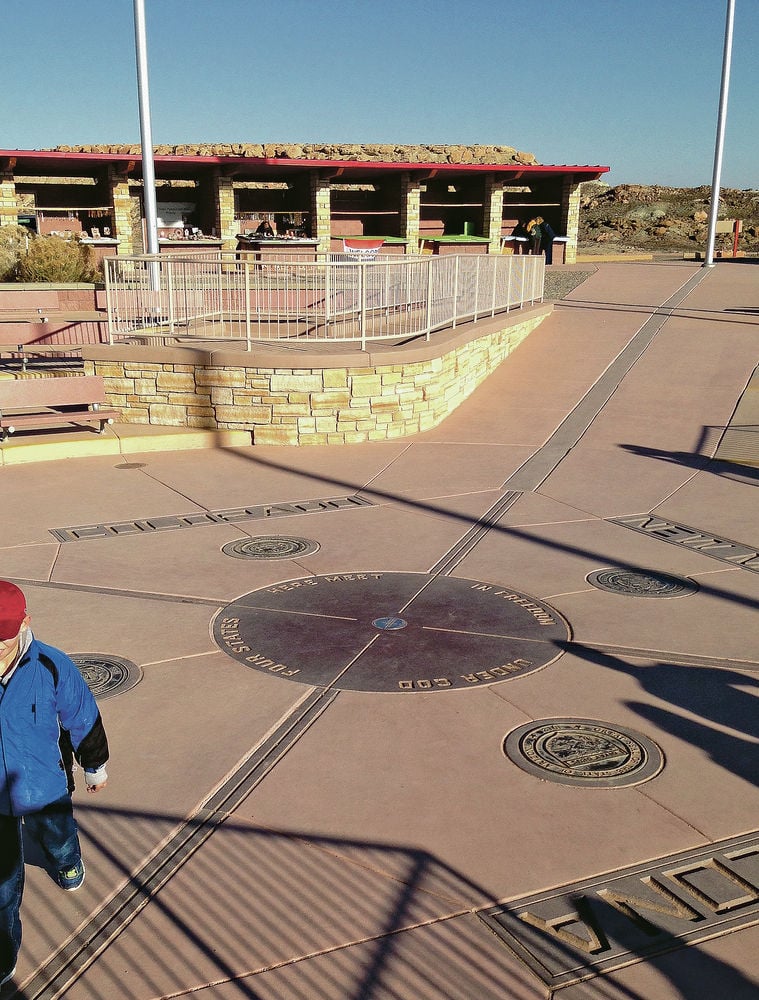 A aluminum-bronze plate in the center of a granite slab depicts the legal borders where New Mexico, Colorado, Utah and Arizona come together. Will Webber/The New Mexican 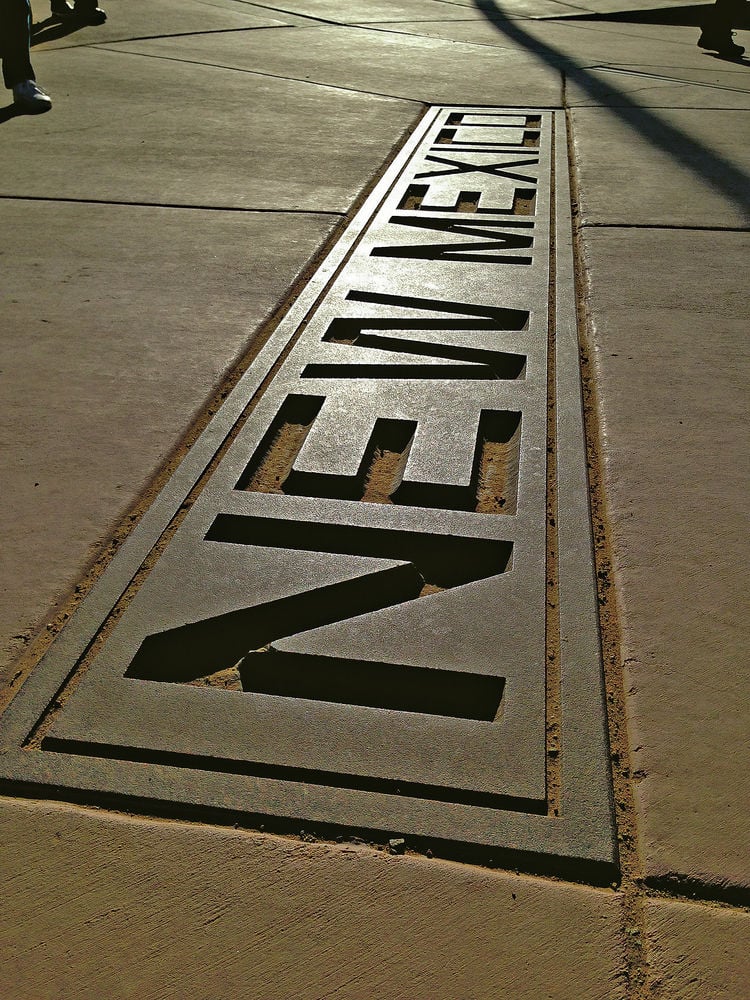 Pre-cast tile slabs identifying each state surround the center point of the monument. Also cast in concrete are the official seals for each of the four states.

It’s a familiar sight at the Four Corners Monument: Tourists taking shots like this to show they can be in as many as four places all at once. Photos by Will Webber/The New Mexican

The monument has changed significantly over the years, growing from an unprotected sandstone monolith to what it is today.

A aluminum-bronze plate in the center of a granite slab depicts the legal borders where New Mexico, Colorado, Utah and Arizona come together. Will Webber/The New Mexican

Pre-cast tile slabs identifying each state surround the center point of the monument. Also cast in concrete are the official seals for each of the four states.

FOUR CORNERS MONUMENT — The hit show Breaking Bad may have made Albuquerque a destination spot for TV enthusiasts, but fans of the series will surely recall Episode 6 in Season 4 titled “Cornered.”

The episode is memorable for the scene where Walter White, the school teacher-turned meth cook extraordinaire, delivers his famous “I am the one who knocks” monologue to his wife, Skyler.

What makes it notable in this instance is its relation to a popular landmark that many New Mexicans have visited at one point or another. Like the Rio Grande Gorge Bridge, the Sandia Peak Tramway or White Sands National Monument, the Four Corners Monument is one of those day trips most folks take at some point.

In “Cornered,” Skyler White drives to the Four Corners with her infant daughter and flips a coin, presumably in an attempt to decide which state to flee to as she contemplates leaving Walt. The quarter settles in Colorado both times she flips. After a moment of consideration, she slides it back into New Mexico and returns home.

And with that, the monument that has become the center of accuracy debates in recent years, became just a little more famous.

The only spot in the U.S. where four states converge on a single point, the monument is interesting if only for its simplicity. At its center is a small aluminum-bronze plate that pinpoints the exact spot where the boundaries touch. It is a singular location where countless tourists have stood and taken pictures — proving once and for all that it is, indeed, possible to be in four places at once.

Speaking strictly from a Santa Fe perspective, the trip is fairly easy. Easy, that is, if you consider four and a half hours in the car an appealing thing to do.

That’s how long it takes to drive from the state capital to this isolated spot run by the Navajo Nation Parks and Recreation Department. Surrounded by hundreds of square miles of high-desert scrub and rugged mountains, the monument’s appeal is in the uniqueness of its geographic significance.

To know you can stand in one spot and visit four states at one time is an odd feeling. But not as odd as knowing some of the history about the place. It became the center of what was then the territories of the four eventual states in 1863, earning its distinction as a special place when surveyors first erected a simple sandstone monolith.

That was eventually replaced by a stone, then a concrete slab with a commemorative plate. Along the way it grew from a solitary block of concrete in the middle of a dirt parking lot to what it is now; a below-grade visitation point surrounded by rows of benches, elevated sidewalks and covered booths where local artisans peddle jewelry, fry bread and just about anything else you might expect in such a setting.

All around are towering flag poles, each displaying the flags of the four states and the Indian nations that lie within. Between each of the four entry points are 4-foot stone structures with the history of each state carved into its face.

In the middle is where it all happens. In groups of one or many, each tourist takes a turn standing on the disc that signifies the four corners. Some straddle that one point; others lie down and splay out in every direction while giggling picture-takers snap away.

And just like that, you realize that’s all there is to see. In just a matter of minutes, the experience is over and reality that you’re dozens of miles from the nearest stoplight hits.

If you’re lucky, you’ll hear at least one tourist recount the media reports that surfaced a few years ago that claim the actual spot where the states converge is somewhere between 1,800 feet and 2.5 miles away, a happenstance of the antiquated technology available to surveyors who marked the monument in the 1800s.

That debate was put to rest when the federal government ruled that the monument is the legal boundary for the four states despite the fact that the true point may rest somewhere within walking distance.

With camping permits available and hiking adventures always an option, perhaps one day Skyler White will venture away from the monument and find the true Four Corners and flip again.

What: Four Corners Monument, the only place in the U.S. where the borders of four states (New Mexico, Colorado, Utah and Arizona) converge at a single point.

Getting there: From Santa Fe it’s 270 miles each way, or about four and a half hours by car.

Cost: $5 per person (kids 6 and under are free); cash-only since the limited facilities do not allow for credit cards or checks.

Fun fact: While it has been documented that the actual spot for the Four Corners is about 1,800 feet to west of where the monument actually resides, the U.S. government recognizes the monument’s spot as the legal boundary between the states. So while you’re technically not in the exact spot of where the borders converge, the law of the land says you are.

Need to know: The monument is run by the Navajo Nation Parks and Recreation Department. There are no amenities within a few miles of the monument, so take cash and whatever refreshments you need before you leave. The nearest outpost is Teec Nos Pos, Ariz., about six miles away.