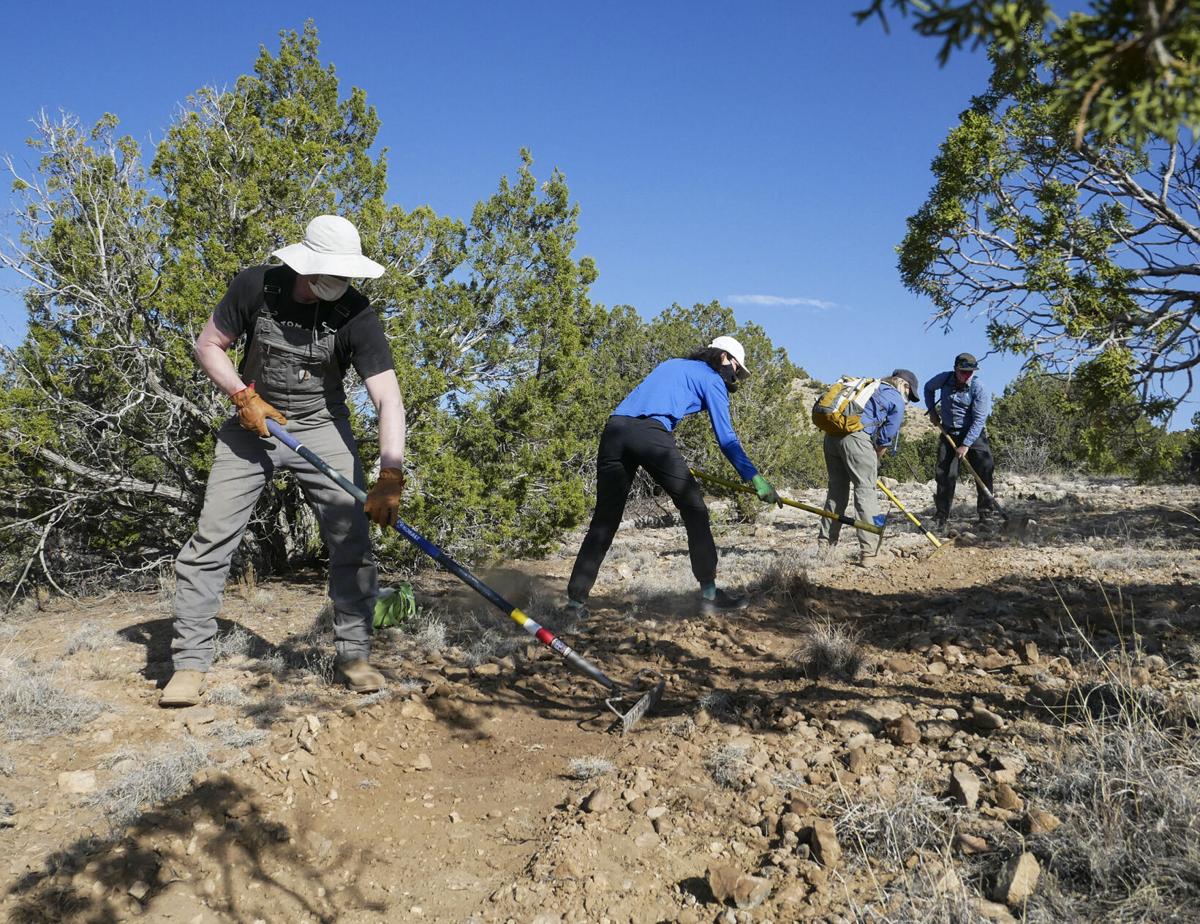 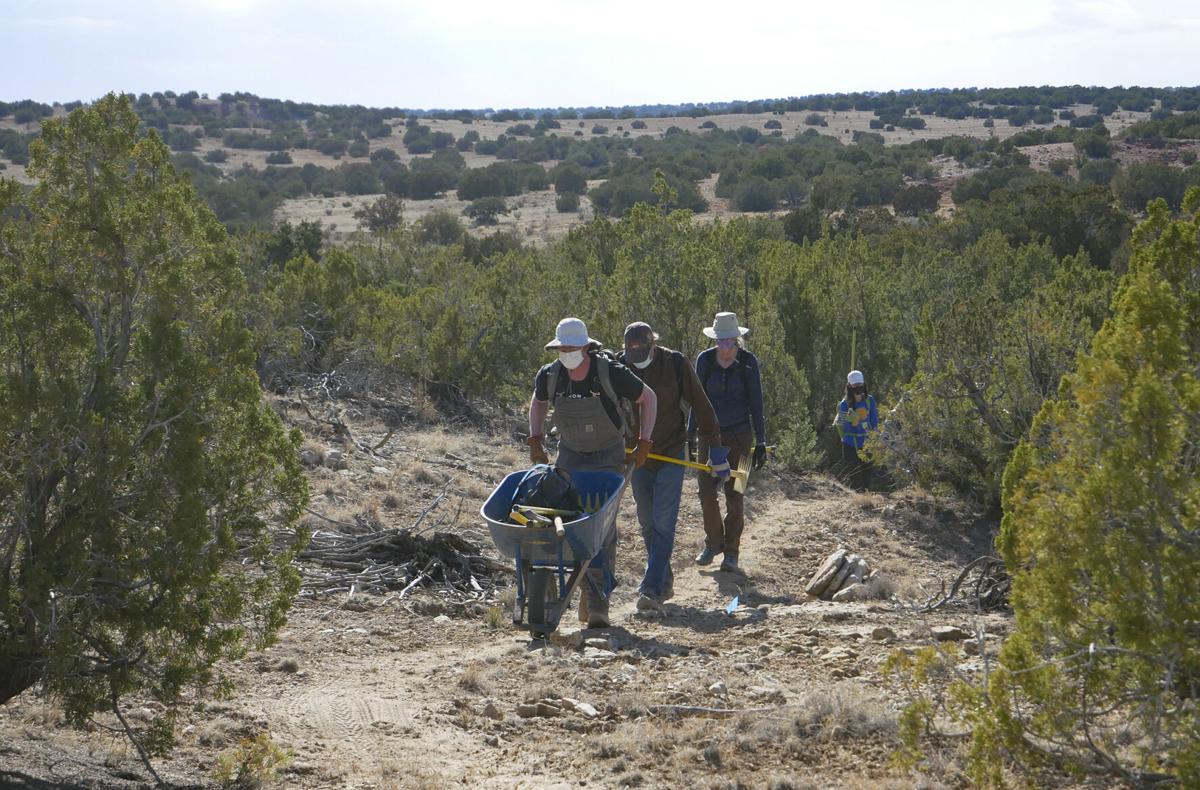 David Estes, front, pushes a wheelbarrow of tools and leads a group of volunteers along a new stretch of trail to reach a build site at Galisteo Basin Preserve during a trail building event organized by the Santa Fe Fat Tire Society last month. 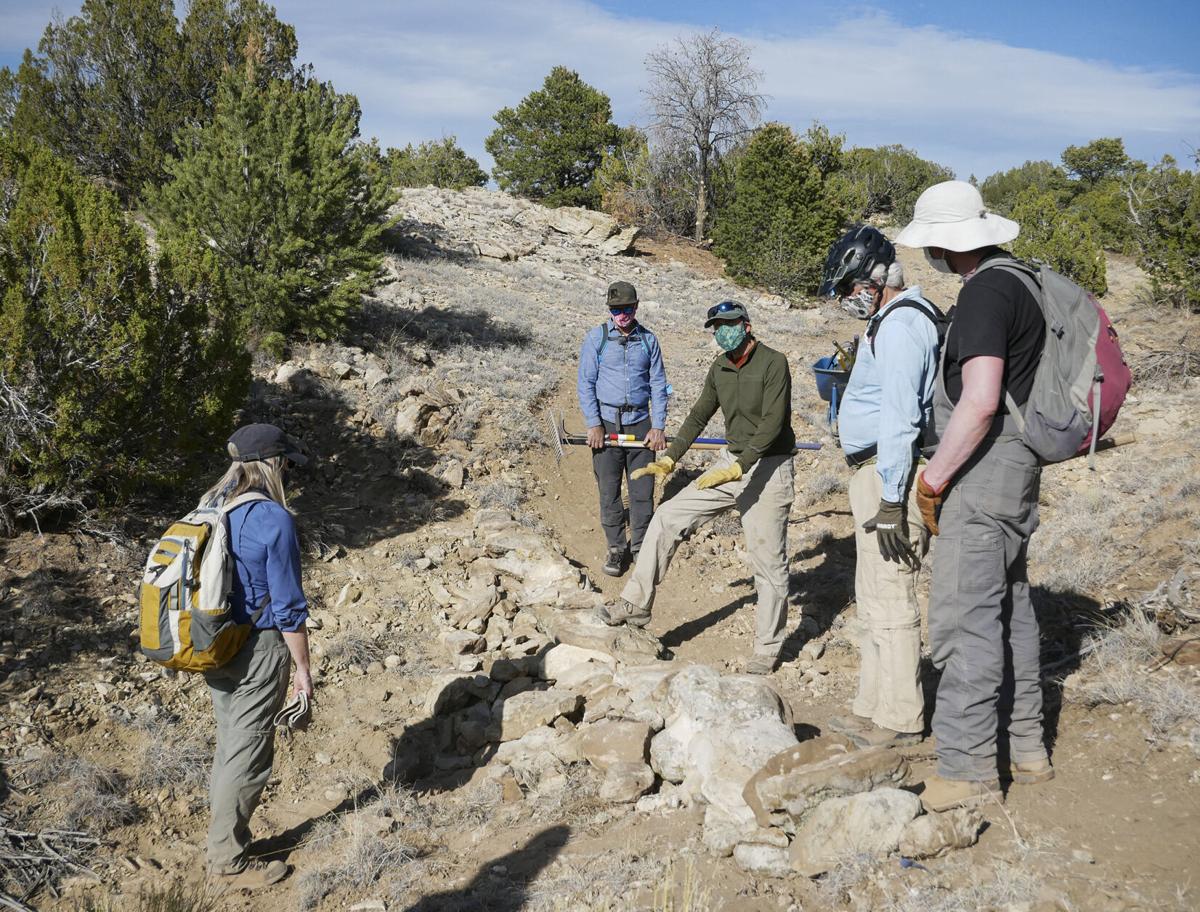 Brent Bonwell, center, a founding member of the Fat Tire Society, provides instructions on how to build drainage into a new trail during a volunteer event last month at Galisteo Basin Preserve. 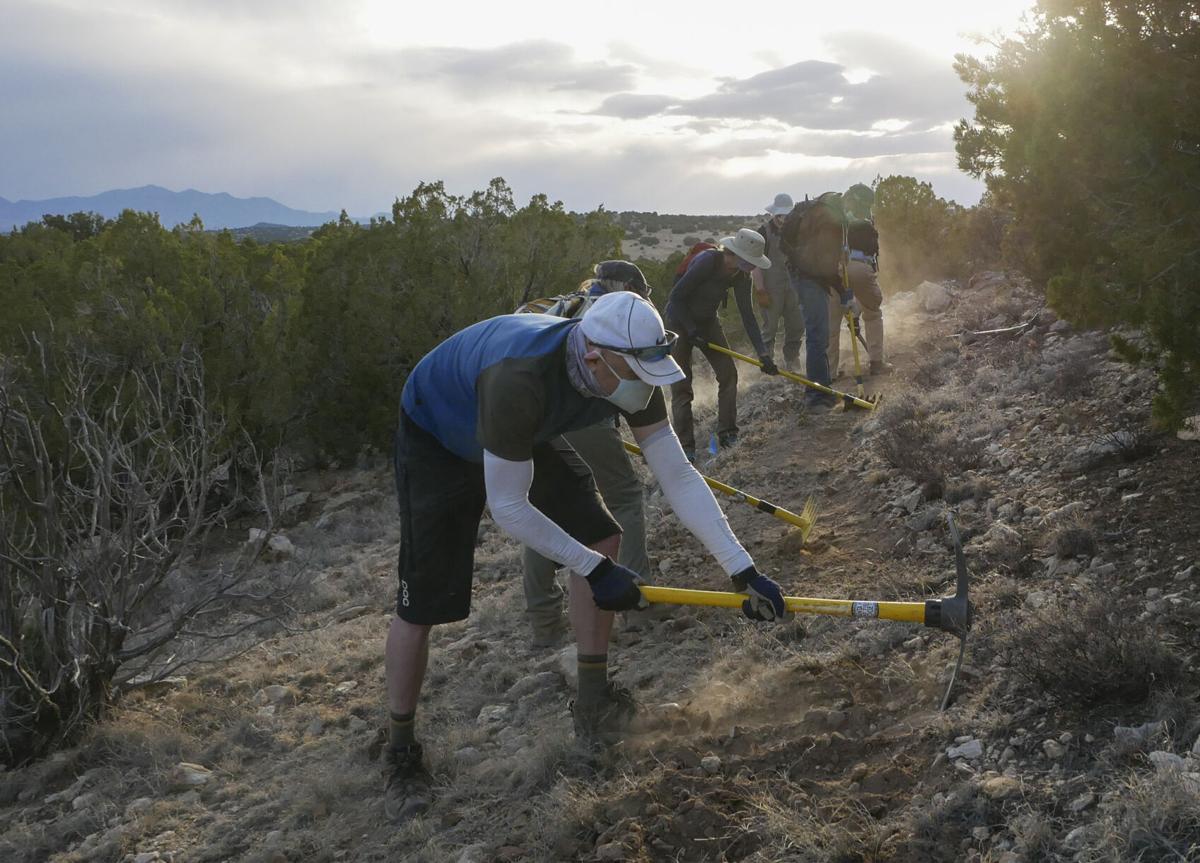 Volunteers work on a new 5-mile stretch of trail at Galisteo Basin Preserve as the sun sets during a trail building event organized by the Santa Fe Fat Tire Society last month.

Volunteers work on a new 5-mile stretch of trail at Galisteo Basin Preserve as the sun sets during a trail building event organized by the Santa Fe Fat Tire Society last month.

David Estes found something he needed at Galisteo Basin Preserve after a move to Santa Fe in the winter, when the coronavirus pandemic was near its peak and the stresses of life were mounting.

Three or four times a week in the months since the move, Estes has taken his bike to the open space trail system near Lamy to ride the ridges, soak in the stunning high desert views and feel temporarily unburdened.

“The thing I’d like to say about these trails is that they’ve saved my life,” said Estes, 44, a New Mexico native and carpenter. “This trail network has been really important to me at a really, really critical time in my life.”

Hikers and bikers have flocked to the trails at unprecedented levels during the pandemic, many seeking similar solace. With little to do for fun while businesses and entertainment venues were closed under public health orders, the restrictions recalibrated the relationship people have with the outdoors.

An enhanced appreciation for local trails has sparked a surge in interest for stewardship as people have come to realize how essential they are for their physical and mental well-being.

Estes joined the Santa Fe Fat Tire Society in early April, and within a week he was scraping a McLeod through the dirt helping the volunteer organization build a new 5-mile loop at Galisteo Basin Preserve.

“I saw that this was happening on the trails that I ride the most,” Estes said, “so I figured I better get out there and do something.”

Many other people have done the same.

Fat Tire Society President Kyle Klain said the club gained about 60 full-time supporting members in the past year, despite being unable to hold events like weekly group rides or other gatherings that serve as a means of recruiting.

“I think one of the best outcomes of the pandemic was everyone had to stay local, and it forced you to recognize what great opportunities you have in front of you that you may have taken for granted,” Klain said.

New Mexico Volunteers for the Outdoors, which works on trail projects throughout the state from spring into the fall, has also experienced a significant boost. Secretary Kevin Wall said the organization has seen a 72 percent increase in memberships this year and now has 121 members.

Not all members participate in trail work, but their financial contributions play a considerable role in the process.

Klain estimated that even with volunteers doing the work, it costs about $1,000 per mile to build trails. The major expenses are hiring experts to perform archaeological and environmental impact reviews to make sure the trails don’t adversely disturb cultural and environmental resources.

Other funds go toward certification for trail crew leaders, insurance costs and tools.

Last year, the Fat Tire Society spent about $15,000 on new trails and trail improvements in Glorieta Adventure Camps, Galisteo Basin and La Tierra Trails. Klain said the group typically maintains 250 to 300 miles of trail each year by clearing deadfall, improving drainage and performing other work requested by land managers, including the U.S. Forest Service and Bureau of Land Management.

Hundreds of volunteer hours go into this process annually, though much of it can go unnoticed and underappreciated by the general public.

“For a lot of us, we think that magic trail elves show up, that these trails have been here forever, that they’ll always be maintained and that deadfall will always be cleared,” said mountain biker Jason Trainor.

Eventually, hikers and bikers reach an age when they realize trail elves don’t actually exist, that it is in fact fellow outdoors enthusiasts who make the magic happen.

Trainor, 55, volunteered for the first time last winter when Fat Tire Society members worked on rebuilding the Hustle and Flow Trail at La Tierra. He came in with no experience, but the veteran crew leaders quickly taught him the skills he needed to contribute.

The pandemic, he said, has shown just how vital multiuse trails are to him and the community, and he has felt a responsibility to step up and pitch in.

“For me, getting on the trails really helped my headspace, helped me have some type of fun or exercise and get away from staring at a computer screen,” Trainor said. “It was a real lifesaver for me.”

“I do plan to continue [with trail work],” he continued. “I’m way behind in contributing relative to how much I use the trails.”

There will be plenty of opportunities to chip in this summer with volunteer organizations beginning new projects and picking up plans that were put on hold in 2020.

The Fat Tire Society has recently been meeting at 4 p.m. Tuesdays at the Cottonwood Trailhead at Galisteo Basin to build a new 5-mile section that Peter Olson of Ultra Santa Fe and Fat Tire Society veteran Brent Bonwell spent months planning out.

The new loop on the southern end of Galisteo Basin will push the 9,500-acre preserve’s trail system to just over 41 miles.

Gretchen Grogan is project manager for Commonweal Conservancy, a nonprofit that controls the preserve. She said Commonweal has long had the goal of reaching a total of 50 miles of trail.

Since the original 15 miles were built, the rest has been completed by volunteers.

But not all new trails are good trails.

A common issue for many trail systems is users building unauthorized “pirate” trails. Grogan said these cause more harm than good and are highly discouraged at Galisteo Basin, where Ancestral Pueblo people lived for centuries.

“There are cultural resources out here everywhere, and people impact things that they don’t even know about,” Grogan said. “Or they build a trail but they don’t do it sustainably, so then we have an emerging erosion problem. It’s a management problem.”

Building trails the right way, in the right places, is what longtime members of the Fat Tire Society love to teach.

He said he’s proud of the legacy the organization has established, not just in terms of the miles of trail it’s built, but in the many volunteers who have been taught to carry on the work.

“It’s been really cool to see the little germ, the incubation of the club and how it’s grown, and now it’s just really starting to explode,” Bonwell said.

“It’s great seeing younger people in their 20s, 30s, 40s, and now they could be building for decades if they continue to do this and carry it forward. Then, if they move out of Santa Fe, they take those skills wherever they go.”

For more information on how to join the Santa Fe Fat Tire Society, visit santafefattiresociety.org. Information for the New Mexico Volunteers for the Outdoors can be found at nmvfo.org.

Great story highlighting the Galisteo Basin Preserve. It's important to add that this trail system was put together and operated by private local nonprofits from the orginator, Commonweal Conservancy, to more recent participants like the Santa Fe Conservation Trust and the Thaw Foundation. Kudos to all of them, as well as Fat Tire, REI and other volunteers and funders.