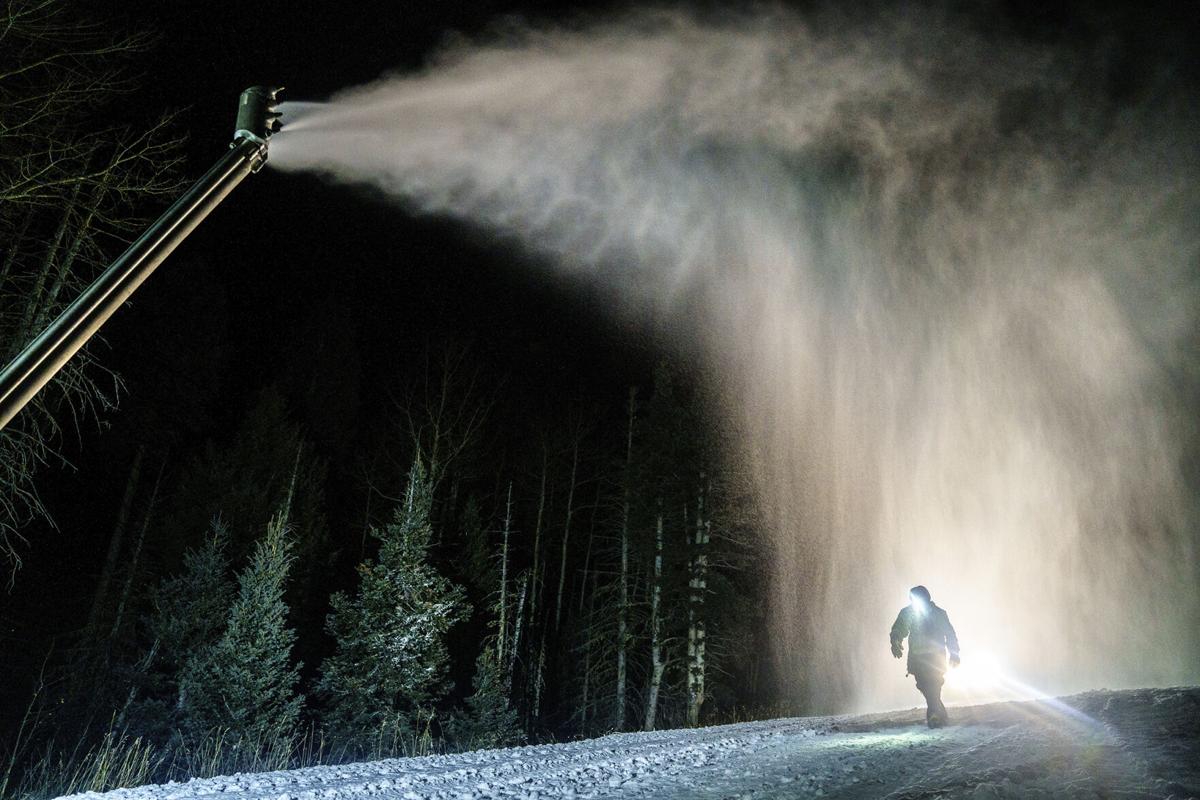 Jesse Stocking, snowmaking manager for Angel Fire Resort, tests the quality of the snow late Tuesday during snowmaking operations. Around 12 crew members work to make the snow at the ski resort, usually in three- to four-person rotations operating more than 60 snow guns at a time. The job involves monitoring conditions such as temperature, humidity and wind to make the best quality snow, in addition to grooming and maintaining the resort’s skiable acreage of 560 acres. 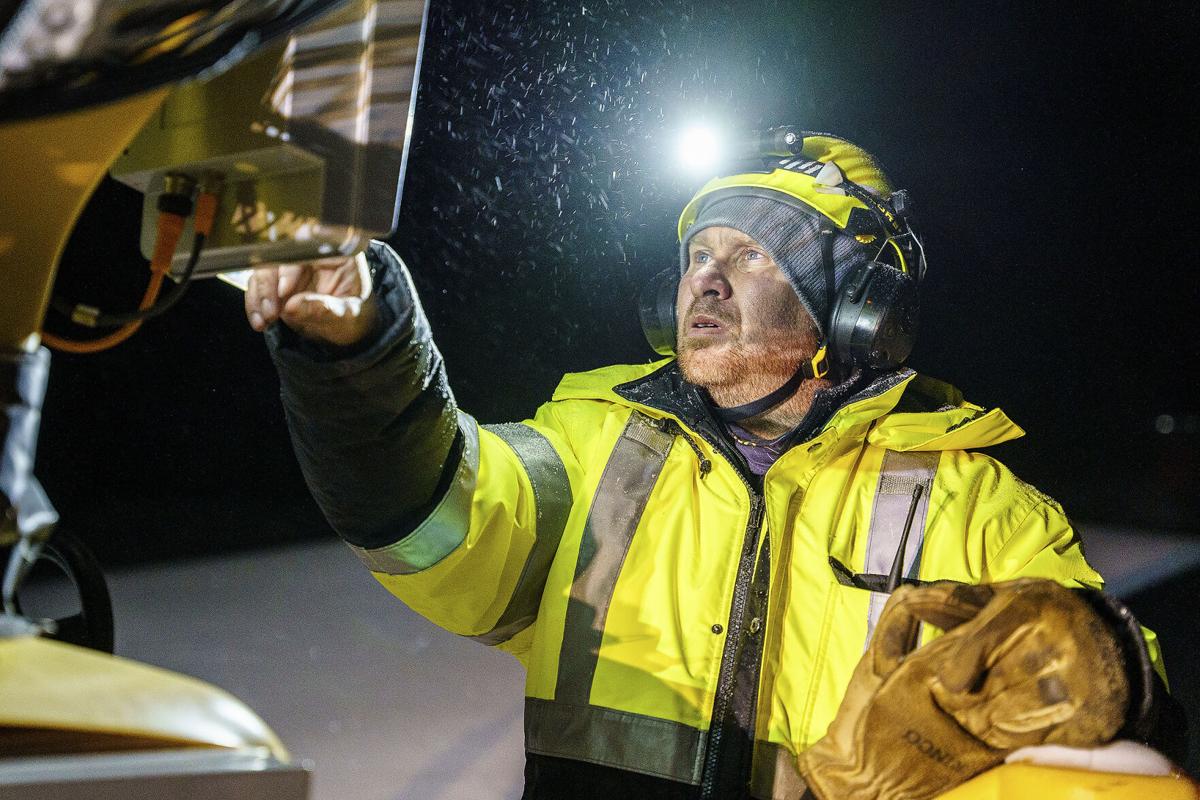 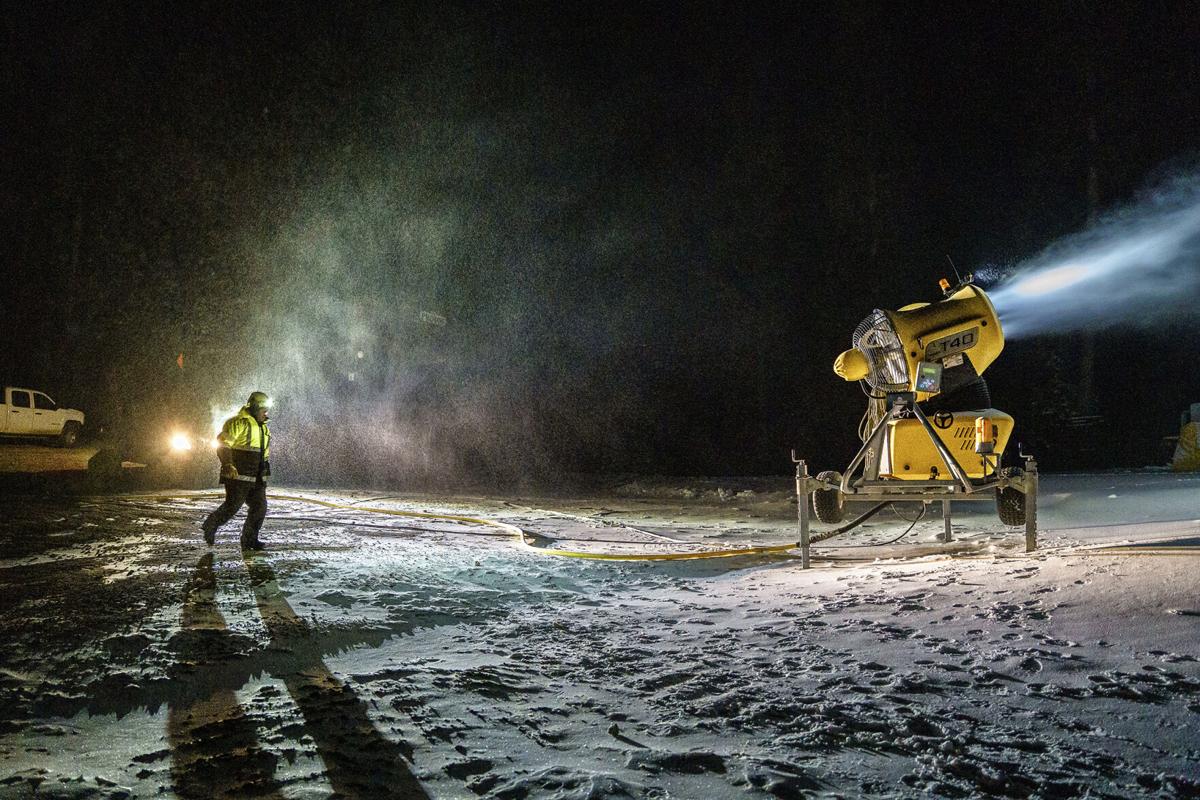 Jesse Stocking, snowmaking manager for Angel Fire Resort, tests the quality of the snow late Tuesday during snowmaking operations. Around 12 crew members work to make the snow at the ski resort, usually in three- to four-person rotations operating more than 60 snow guns at a time. The job involves monitoring conditions such as temperature, humidity and wind to make the best quality snow, in addition to grooming and maintaining the resort’s skiable acreage of 560 acres.

Several ski resorts in Northern New Mexico opened for business last month — despite there being virtually no natural snow on the ground.

To remedy this, ski resorts brought out their snowmaking machinery. As the planet continues to warm, the machines — which use millions of gallons of water for relatively small sections of ski runs — are becoming increasingly important for ski resorts’ bottom line.

Winter storms and cold fronts likely won’t be as frequent this season, the result of a second consecutive year of La Niña conditions in the Pacific Ocean, said National Oceanic and Atmospheric Administration Meteorologist Scott Overpeck.

Patrick West, the snowmaking assistant manager for Angel Fire Resort, said higher temperatures are his least favorite part of the job. Typically, snow is made below a temperature of 27 degrees Fahrenheit. West has to constantly check the air temperature and moisture to see if snow is ripe to make. He said he gets frustrated when he goes out at midnight ready to make snow, only to discover that temperatures will be a degree or two higher than 27.

“It’s very warm out, and we’re hitting 60-degree temps in the daytime, and it takes so long to cool off by the nighttime you only get ‘X’ amount of hours to blow snow, actually,” West said. “Normally, we’re used to doing a 12-hour shift of blowing snow. Right now we’ve been roughly doing six hours.”

For West and other snowmakers, the lower the temperatures, the more efficiently they can make snow. West said they usually start in late November and shut down snowmaking by Feb. 1.

Angel Fire Resort has a crew of 10 to 12 people to make the snow and maintain a skiable terrain of 560 acres.

The technology involved in making snow is becoming more sophisticated and energy-efficient, West said. However, they are expensive to operate because of the amount of electricity they use, he added.

Fan guns, like the ones at Angel Fire, have about a 35-inch-diameter cannon tube. Inside, the gun contains a massive fan, which creates high-pressure air and is equipped with an on-board air compressor. It is then fed a supply of high-pressure water. Smaller guns can shoot at a range of about 30 feet, and the larger ones can shoot at about a 75-yard range, West said.

When they’re switched on, the guns make piles of snow.

And as a snowboarder and skier, West said he can tell the difference between manmade and natural snow.

West said during Thanksgiving week crews were running 55 guns to create snow for a 3.5-mile ski run. Making snow for that length of ski run takes about five days with 12-hour shifts.

West estimated it takes about 8 million gallons of groundwater to create snow for that size run, but added it doesn’t go to waste once it melts.

“By springtime all that water melts, replenishes the aquifers and goes back down to the creek, so it’s kind of fascinating,” he said.

The Office of the State of Engineer’s Water Resource Allocation Program is responsible for managing water resources in New Mexico. Asked about water use monitoring from snowmaking at ski resorts, it responded in a statement that water permits are not issued in cases of water waste and illegal use such as “any impairment to any nearby water right holders.”

“Many ski resorts apply for a permit from the Office of the State Engineer to pump groundwater to use in the creation of artificial snow. When evaluating those permit applications, the OSE verifies that the ski resort owns the water right, whether the water will be put to beneficial use (in this case creating snow for ski resorts which can have a recreational and economic benefit) ...”

Retired Colorado State Climatologist and Community Collaborative Rain, Hail and Snow Network (CoCoRaHS) founder Nolan Doesken said water does get lost when ski valleys pump millions of gallons of water into snowmaking, but he wouldn’t characterize it as significant.

“There are some losses along the way: 20, 10 or 30 percent. I think under most circumstances they get most of the water back into your soil moisture or into the groundwater or into the stream,” Doesken said.

Doesken advised to expect less of the fresh snow powder that skiers crave to ski on in the years to come.

He added, however, natural snowfall shouldn’t be going away anytime soon in the West, particularly in places with higher altitudes.

A version of this story first appeared in The Taos News, a sister publication of The Santa Fe New Mexican.

Welcome to the effects of global warming. There will be less and less snow and higher temperatures will eventually make artificial snow on our slopes impractical. That’s also the Santa Fe watershed up there. No or little snow means less water for all that new construction going on. At some point we have to accept reality and prepare for less water here especially as the other Santa Fe water supplies get more tenuous as well.

I mean, seeing how cutting back our fossil fuel use and actually slowing global warming is rejected by so many…

Right you are, Mr. Fields. And this is not new news. More than a decade ago before it shut down, the Rocky Mountain News ran a headline, Drought Threatens Ski Areas', that is, drought from global warming. I bogged, 'yes it threatens skiing, and drinking water, and food.' We I trust know that snow-making takes enormous amounts of our scarce water. It has a cost.