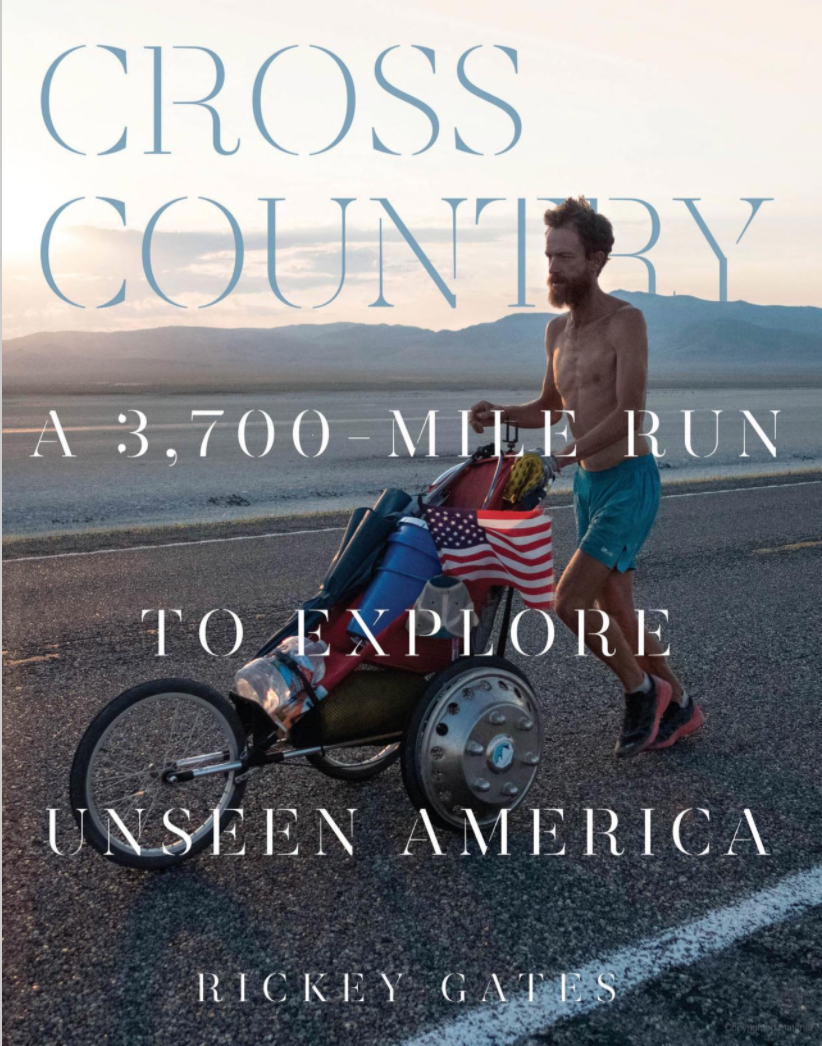 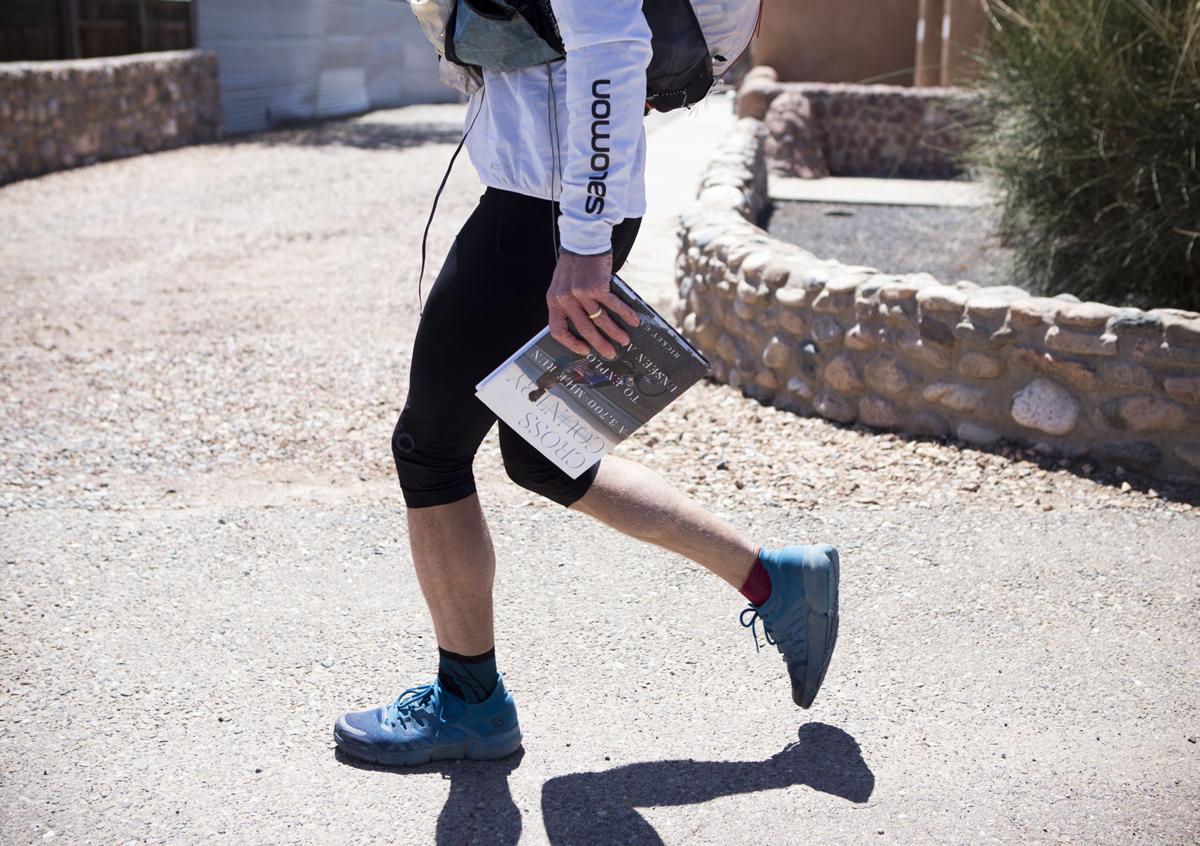 Professional runner Rickey Gates walks down Agua Fría Street on Tuesday with his book Cross Country: A 3,700-Mile Run to Explore Unseen America, which was published that day. Although Gates could not host an in-person book launch due to the coronavirus pandemic, there were hundreds of pre-orders as well as online orders on release day.

Professional runner Rickey Gates walks down Agua Fría Street on Tuesday with his book Cross Country: A 3,700-Mile Run to Explore Unseen America, which was published that day. Although Gates could not host an in-person book launch due to the coronavirus pandemic, there were hundreds of pre-orders as well as online orders on release day.

For Rickey Gates, traversing 3,700 miles across the country on foot wasn’t solely a physical challenge but an opportunity to learn more about the United States and the people who live here.

Last week, more than 2½ years since completing the grueling adventure from Folly Beach, S.C., to San Francisco, the Santa Fe-based professional runner published his first book, Cross Country: A 3,700-Mile Run to Explore Unseen America, which reveals intimate moments from his journey, with both imagery and words. The idea of the photo-centric memoir, Gates said, is to encourage people to get outside their comfort zones to see new places and meet new people.

“We simply need to make a bigger effort at taking down the bubbles that we live in,” Gates said, noting that for so long, he absorbed ideas about various communities across the country based on what he heard on news outlets or from family members and friends. The hope of his long-distance run was “to test that out a little bit and experience these things on my own.”

Gates, 38, has dreamt of a cross-country journey since reading Peter Jenkins’ A Walk Across America when he was 16 years old. At 19, Gates gave the venture a shot while taking two years off from college. He rode his bike to Washington state with the intention of cycling the circumference of the U.S. but lasted just three days before injuring his knee.

It wasn’t until March 2017, years after Gates established himself as an elite trail runner, that he decided to give the trip another try — this time on foot. For five months, he averaged a marathon — 26.2 miles — every day until he reached the California coast Aug. 1.

Gates, whose running career has taken him to all seven continents — yes, he even raced in Antarctica — and more than 35 countries, said one day he realized he’d “seen more of Europe than Arkansas” and wanted to explore more of his home country. Also thinking his time as a competitive athlete may be running out, he said, he wanted to leave a new mark for himself as a mountain and trail runner: “It seemed like a good time to take on that challenge again,” he said of his teenage dream.

And it was indeed a challenge. Not only did Gates have to overcome aches and pains, dehydration and hunger along the self-sustained trek, but he also ran and camped through just about every type of weather imaginable: below-freezing snowstorms in South Carolina, relentless rainstorms in Oklahoma and triple-digit heat in Nevada. Along the way, he rarely showered — he stayed in a hotel about once a week and bathed in streams or rivers when they were available. “I discovered the miracle powder: Gold Bond,” he said with a laugh — and survived on a $1,000 per month budget that included fast food and gas station snacks. His favorite was Pop-Tarts.

For the first 3,000 miles of his 150-day run, Gates lived out of a small backpack, which carried necessities such as sunscreen, hiking poles and camping equipment. But eventually he pushed a baby stroller his friend sent him from Ohio so that he could tote up to three gallons of water needed in the West’s hot desert climates. A shirtless, bearded Gates can be seen running through Fallon, Nev., with the stroller on the cover of his book.

Gates estimates his route comprised about 1,000 miles of trail, 2,400 miles of road and 300 miles on a stand-up paddleboard along the Tennessee River. Though he traveled many popular routes, like the Appalachian Trail, he also found solitude in more rugged, overlooked pathways. Waking up in the morning along the near-deserted Ozark Highlands Trail in Arkansas, “the color green was almost blinding to me,” he recalled.

Yet it was the people he met along the way that made the greatest impression.

The one who stands out most to Gates is a man named Kevin. The two met in a gas station in Ralston, Okla., when Gates was asking a cashier for advice on where to find shelter from a coming rainstorm. Kevin, who was standing behind Gates in line, “looked me up and down and said, ‘You’re staying with me, brother man,’ ” Gates recalled. For the next five hours, Gates said, the duo shared a 12-pack of beer while Kevin told his whole life story and introduced Gates to his dogs and pet squirrel. He even invited Gates to help him spread his late mother’s ashes. Kevin’s life was “hard living, needless to say,” Gates said, but the new friend “was extremely generous and very, very kind.”

Natalie Severy, a fellow Santa Fe runner who has known Gates for 20 years, said Gates’ innate curiosity and desire to build authentic relationships through running set him apart from other professional athletes.

“I think he’s more invested in content than he is around relaying his own image,” Severy said, adding that some runners embark on a journey like this for reputation’s sake, and “most running books are about running and runners’ personal experiences with running.”

“Rickey’s book isn’t about that,” she added. “It’s about all the things outside of running.”

Gates, whose work has been published in Outside, Trail Runner and Runner’s World, said the original plan was to host an in-person book launch and national movie premiere of Cross Country — a videographer followed him for about a month of the journey, and Gates regularly documented himself on multiple cameras. But with the coronavirus pandemic forcing bookstores and movie theaters to shut down, he hosted a launch on Instagram, which at least 500 people attended.

Gates said he hopes to do a book tour at a later date — gathering to read excerpts is “a good excuse to have a party,” he said — and is researching ways to launch the movie on an online platform. Ideally, he said, he will be able to charge viewers a small fee that can go toward coronavirus relief.

Until then, Gates can be found meandering through Santa Fe as part of an ongoing project called Every Single Street in which he hopes to walk or run every documented road in a particular city or town. The project launched soon after he ended his journey across America, building on the desire to discover “unseen America” and unity among its people.

In the end, “I don’t think we’re that different,” Gates said. The core of humanity “is love, it’s adventure, it’s compassion.”

You can order the book on Amazon.com or through local bookstores, which are offering call-in orders that can be picked up or shipped to your home.

Taking it to the streets of Santa Fe