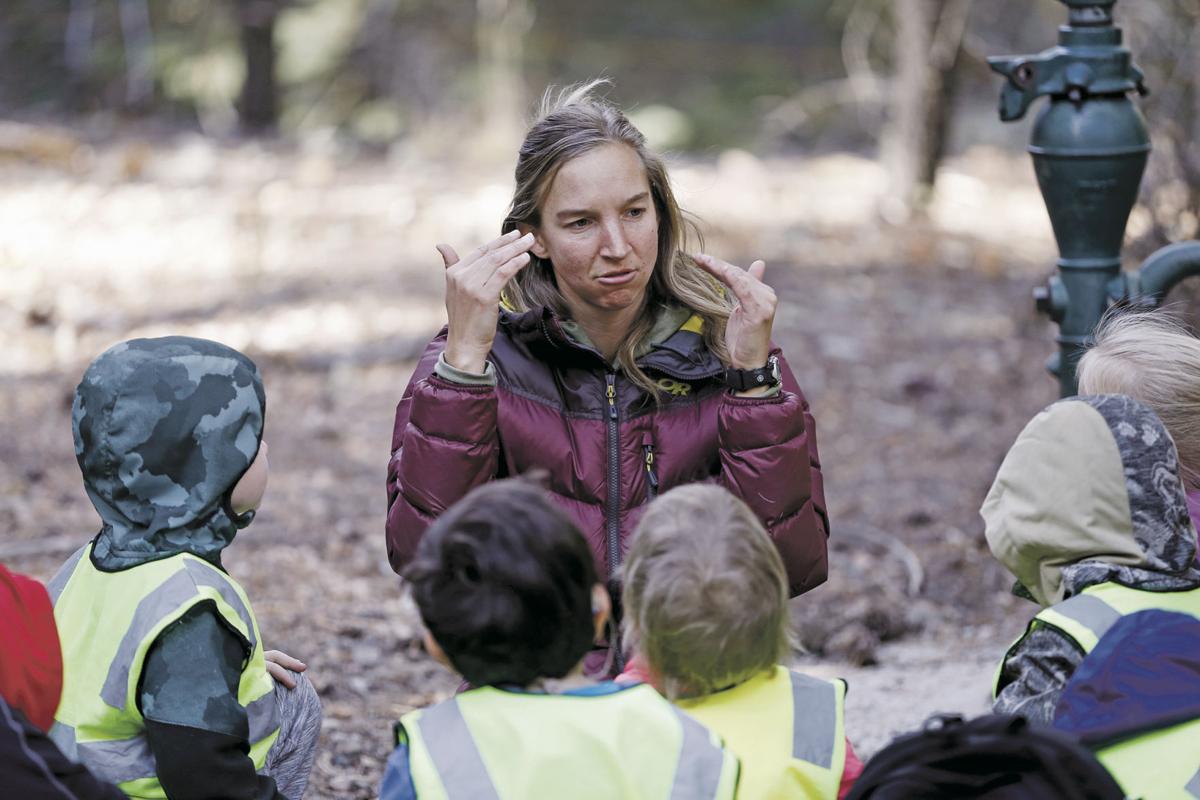 Marisa Soboleski, coordinator of the New Mexico School for the Deaf’s Forest Day Learning program, talks to a group of young students while on a trip to Hyde Park in November. 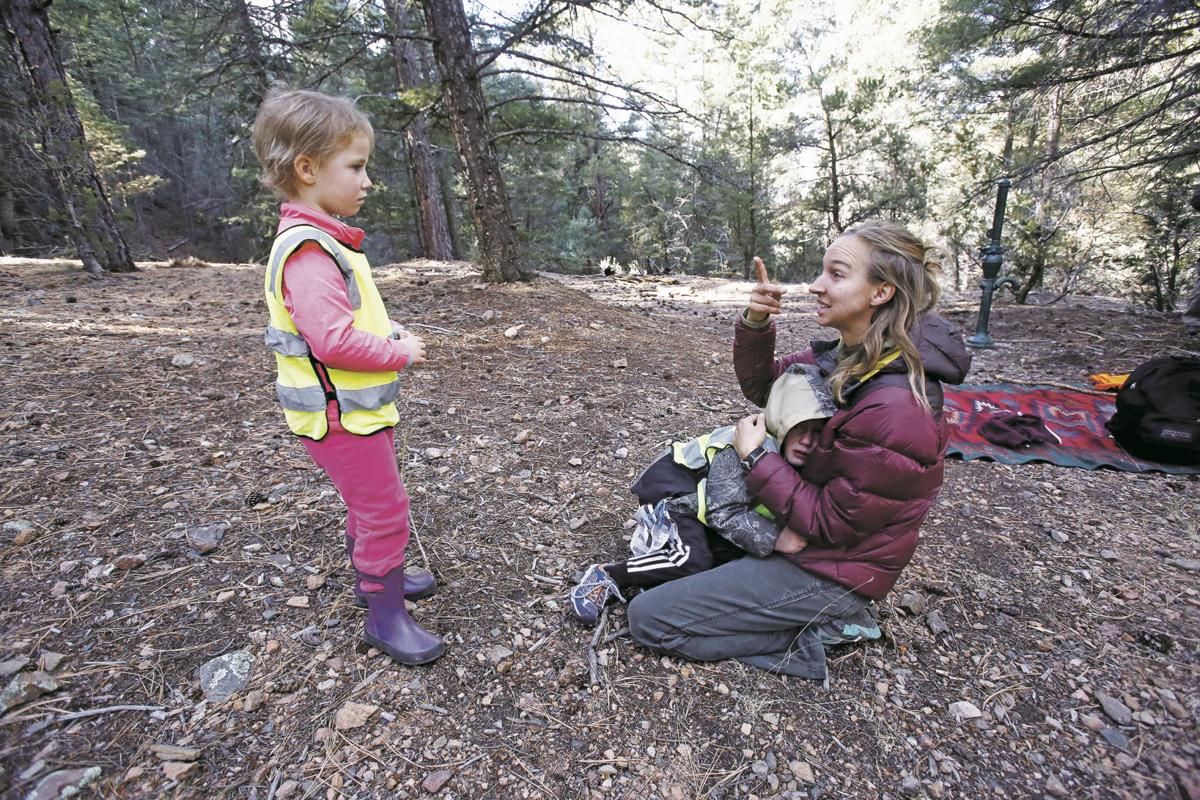 Soboleski talks to Zoe Pedersen, 4, and Wesley St. Clair, 4, during a session in the forest in November. She said the forest program exposes deaf and hard-of-hearing kids to learning opportunities they might not otherwise get. 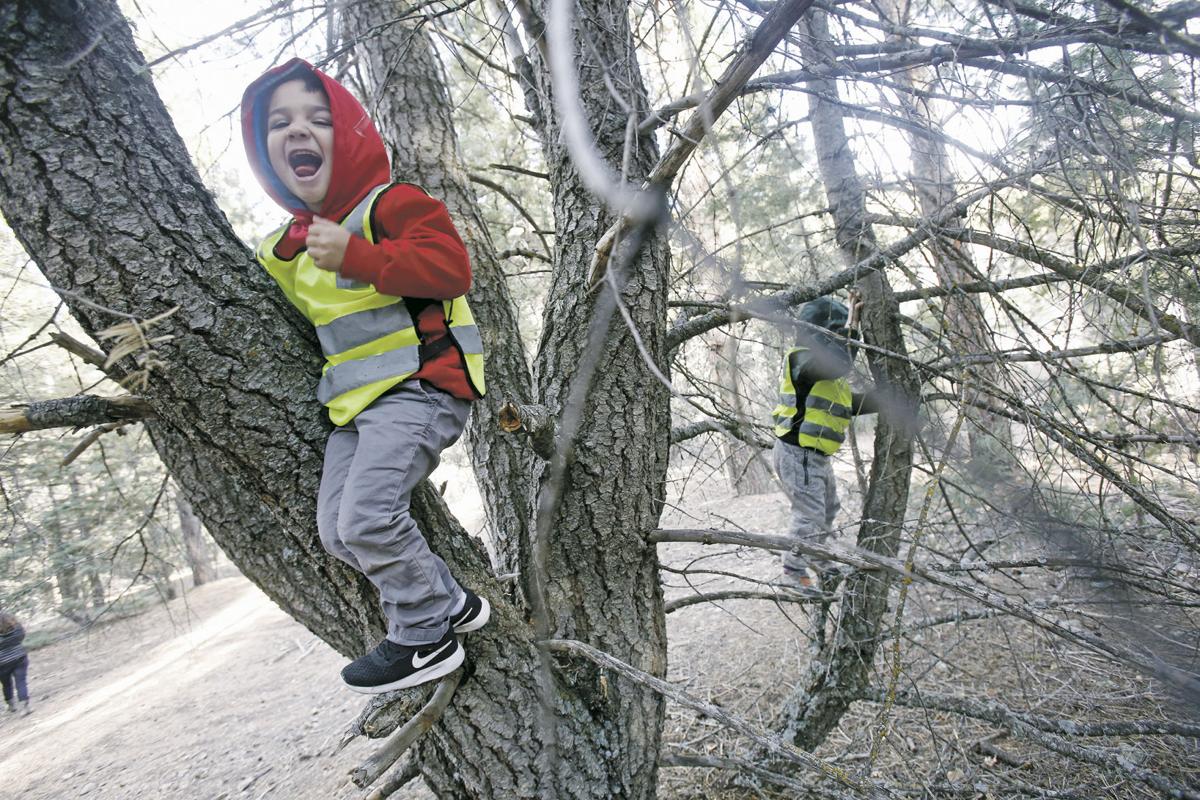 Kai Newell, 4, climbs a tree while on a trip with the New Mexico School for the Deaf to the forest.

Marisa Soboleski, coordinator of the New Mexico School for the Deaf’s Forest Day Learning program, talks to a group of young students while on a trip to Hyde Park in November.

Soboleski talks to Zoe Pedersen, 4, and Wesley St. Clair, 4, during a session in the forest in November. She said the forest program exposes deaf and hard-of-hearing kids to learning opportunities they might not otherwise get.

Kai Newell, 4, climbs a tree while on a trip with the New Mexico School for the Deaf to the forest.

First, they say hello to the trees. Then they’re adorned with yellow-green vests. Then, after a brief period of instruction, they scatter.

The seven 4-year-olds are off, dispersing across their forested classroom in Santa Fe National Forest near Hyde Memorial State Park. There is plenty to keep the kids occupied. Some look for wooden numbers that have been hidden within their boundaries — marked by an elastic orange cord. Others climb logs and take turns hanging from branches. And a few congregate on a blanket with a dozen or so picture books, including one featuring yoga poses they seem to know well.

The kids — and the adults supervising them — are part of the New Mexico School for the Deaf Forest Day Learning program. Marisa Soboleski, coordinator of the initiative, said the school has been conducting the program for four years and that each participating class spends a few hours in the forest every two weeks. The initiative is run throughout the school year — including during the winter — for kids in preschool through kindergarten at the Santa Fe and Albuquerque campuses. Soboleski added that the program is the only one of its kind she’s aware of among deaf schools.

She said the initiative exposes deaf and hard-of-hearing kids to learning opportunities they might not otherwise get.

“A lot of people are overly protective with deaf and disabled kids, and so they miss a lot of incidental learning in their lives generally speaking,” Soboleski said. “And so [the forest program] is a great opportunity for us to discuss things like that and problem solve.”

Kids are encouraged to take risks, within reason, she said. For example, she said she likes to see the children climbing trees and testing whether a particular branch will hold their weight. The adults present — typically Soboleski, the teacher of the class and a teacher’s aide — will help if necessary, she said, but they try to allow the kids to rely on themselves and one another.

Looking at the kids running around in the forest, Soboleski explained that having time for play is important.

“Often adults look at play and think it’s frivolous, like ‘oh they’re just playing,’ ” she said. “But playing is full of developmental learning and it is a very powerful tool. Information is retained much more deeply.”

Kim Hand, a pre-K teacher at NMSD, said in addition to play, learning from the classroom is incorporated into the forest program.

“I’m studying numbers with them, and so I asked, ‘Could you integrate numbers in some way?’ ” Hand said. The result was an idea to hide wooden numbers and for kids to report which numbers they found.

Hand added that when her class is out in nature, she’s noticed a reduction in negative feelings, saying the opportunity for forest play can help them work through some of those emotions.

Scott Mohan, principal of NMSD’s early childhood program, said parents of students in the forest program are enthusiastic. He said they often notice a change in their kids after they’ve participated in the program.

“Parents see their children be more involved, more motivated,” he said. “Maybe they go home and they want to go out more with their families. Sometimes children are afraid of these types of things. … If they’re not as confident as they want to be, after a couple of sessions they develop that confidence.”

Mohan said with the busyness of everyday life, it’s important for NMSD to create opportunities to be in the wilderness.

“Nowadays, kids don’t have as many opportunities to get out and experience nature,” he said. “Their parents are working more and schedules don’t permit going outside as much as they used to.”

Soboleski added that studies have shown kids who are exposed to the outdoors at a young age are more likely to value taking care of the Earth. Specifically, researchers at Cornell University found that kids under the age of 11 who spend time doing activities in wilderness settings — such as hiking or camping — displayed more pro-environment attitudes as adults than those who did not.

At the site near Hyde Memorial State Park, the day’s forest learning session is wrapping up. Soboleski corrals the kids toward a blanket. There, she begins ladling apple juice into paper cups. Some of the kids jostle, knocking over items.

Soboleski tells them whoever can be the quietest gets juice first. Three kids sitting near the front of the blanket are immediately quiet and still.

After everyone has had something to drink, Soboleski asks them to draw their favorite part of being out in the forest that day. Their scribbled crayon lines depict trees and other scenes.

Then it’s time for the closing ritual.

This woman is great. I live well East of Sante Fe in Rociada but was wondering how I can be involved. None of my children or grandchildren fit into this target group but was wondering. I am 70 plus so do not know if this in an issue.