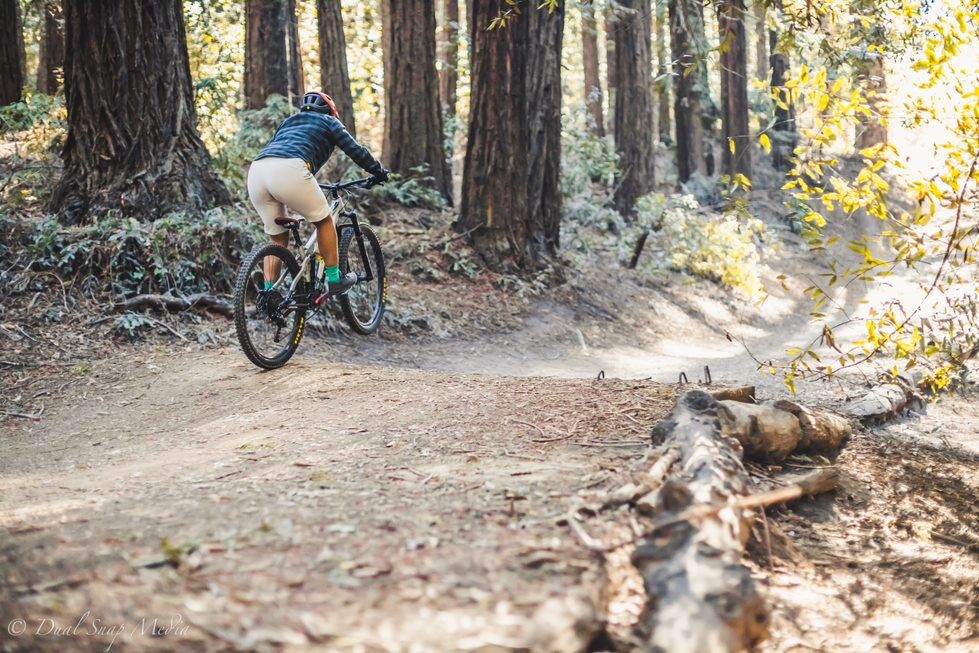 Annijke Wade, who got into mountain biking through her job at Descartes Labs, says, ‘It’s a great way for me to see Santa Fe and more of New Mexico.’ 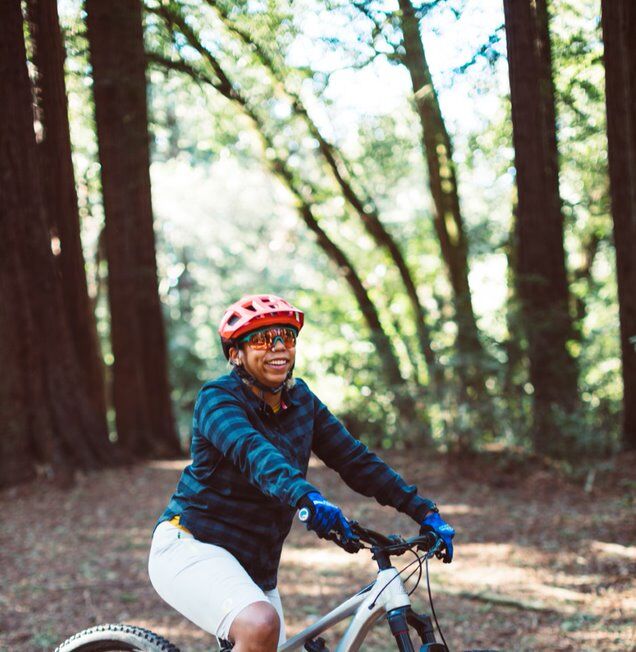 Wade is an ambassador for Vida Mountain Biking Series, a Colorado-based nonprofit whose mission is to ‘empower and unite all women through cycling,’ including women of color.

Annijke Wade, who got into mountain biking through her job at Descartes Labs, says, ‘It’s a great way for me to see Santa Fe and more of New Mexico.’

Wade is an ambassador for Vida Mountain Biking Series, a Colorado-based nonprofit whose mission is to ‘empower and unite all women through cycling,’ including women of color.

When Annijke Wade first set foot in New Mexico two years ago, she was unfamiliar with the landscape and its environs.

But she quickly learned to adapt to the dry air and high altitude. She even picked up a new hobby that became something of an obsession.

Wade, 35, is a geospatial professional who took a job at Descartes Labs in 2019.

“I typically work at companies that specialize in machine learning and artificial intelligence on their geospatial teams or geospatial projects,” she said.

Originally from Sonoma, Calif., she wondered how she might enjoy the state’s outdoor offerings. She was getting bored with “slower-paced activities,” like hiking. Then, after receiving an email through her job about a mountain biking club starting up, something changed.

“I went online and purchased a mountain bike the next day, and it arrived and I put it together myself,” she said.

After a few test runs with her new bike, she was hooked. “It’s a great way for me to see Santa Fe and more of New Mexico,” she said. Wade started riding every day.

After a biking skills clinic, she became more focused on competitive cycling. Wade is an ambassador for Vida Mountain Biking Series (vidamtb.com), a Colorado-based nonprofit whose mission is to “empower and unite all women through cycling.” Vida provides education and resources through its clinics and virtual events, recently expanding its mission to focus on women of color: “Mountain biking should be accessible to every Womxn of Color, cultivating confidence, joy, and freedom,” according to Vida’s mission statement.

Wade’s first clinic took her to Durango, Colo., and on her second day, she was riding the Engineer Mountain Trail outside Silverton, with an elevation gain of over 3,000 feet.

“Most of my mountain biking experience has been me just saying yes and then getting there and being like, ‘Holy smokes! This is kind of crazy,’ ” she said.

It was the most challenging ride she had done up to that point, having just started the sport four months earlier.

But there was something extremely satisfying about being pushed out of her comfort zone. “As soon as I got home from the clinic,” Wade said, “I made the decision that I actually wanted to take training more seriously.”

She decided to sign up for a competitive race and eventually focused on the Sea Otter Classic, an outdoor festival and mountain biking competition based in Monterey, Calif., which was canceled due to COVID-19. She did, however, compete in a two-day Revolution Enduro competition in Steamboat Springs, Colo. (A Santa Fe iteration, the Big Mountain Enduro, is scheduled for May 29 and 30; should the event be postponed, it will be moved to either late August or early October.)

This year, she plans to compete in three to four races.

Wade also is affiliated with an organization called Ride for Racial Justice, through which she won a scholarship to compete in one of her planned races this year. Ride for Racial Justice, based in Denver, formed in the wake of the 2020 marches against racial injustice. It will sponsor 25 bikers who are Black, Indigenous or people of color for a gravel race this year.

“We’re getting everything from really cool gear for our bikes and components to a training plan, and mental and actual support for the race,” she said.

Wade has formed partnerships with other organizations like Pearl iZUMi, which “focuses on creating environmental products and sustainability,” she said. And Guerrilla Gravity, a mountain biking company in Denver, will furnish her with its Gnarvana carbon frame bike with an aluminum rear triangle design.

As an African American woman in the outdoors, Wade admits that there are challenges yet to overcome in outdoor spaces, particularly when it comes to racial identity.

“I started recreating in the outdoors on my own at 16 or 17. I started hiking my local trails and the mountains on my own. So, I’ve been navigating this space for quite some time. But I haven’t interacted with a lot of people who look like me. It’s not because they’re not out there; I just haven’t connected with them.

“This year, in particular, it’s been really great to see the BIPOC [Black, Indigenous and people of color] folks in the outdoors come together,” she said.

Wade has reached out to other outdoor enthusiasts through social media and has found it rewarding to share experiences about “what it feels like to be ‘othered’ in the industry,” she said.

In cycling, there is momentum building around multicultural representation, spearheaded by the likes of Ayesha McGowan, the first Black woman to cycle professionally, who started a recently published article for bicycling.com by stating that it’s “very exhausting navigating white folks and their feelings … making them feel less uncomfortable with my Blackness, and spending time and energy helping them sort through the things they don’t understand about the very essence of my humanity.”

Organizations like Outdoor Afro, Brown Folks Fishing, NativesOutdoors and Unlikely Hikers document the experiences of outdoor enthusiasts from various racial and ethnic backgrounds, and serve as focal points of community activism and advocacy.

Wade described her alignment with Ride for Racial Justice as “revolutionary.”

“I’ve never been in a community with that many BIPOC individuals who have similar interests in anything in my life, so it’s very exciting,” she said. Most of the events have been held via Zoom conference lately, but they have left Wade “feeling very warm inside,” she said.

To help her train for events in or out of state, Wade takes to familiar locations throughout Northern New Mexico to train and enjoy public outdoor spaces.

“I will never get tired of riding at [the] La Tierra [trails],” she said. “I like going there and having dedicated loops that I do and then watching the progress over time on those loops has been really satisfying.”

She said La Tierra, located just off N.M. 599 in Santa Fe, is a great place to bring beginners as well. “There’s easy access to it and the features aren’t so large that folks get scared,” she said.

She also enjoys the Winsor Trail, Glorieta and Angel Fire. She said Glorieta is among her favorite local trails, and she described it as a world-class mountain biking area. She also mentions Galisteo Basin in her list. Wade is excited to check out new trails that local nonprofit Fat Tire Society recently constructed.

Wade, who is active on Instagram @geodesicdome, posts snapshots of her mountain biking exploits throughout the region and elsewhere. Of particular interest is her desire to do “land acknowledgments” on her posts.

“On land stolen from the Ohlone,” is the annotation on a post taken in the Redwood Forests. “Ohlone” refers to the language family common among Native tribes that originally inhabited the coastal areas of California.

“I think it’s really important to talk about the land we’re on and to recognize that all of this land is stolen. In doing so, we are paying respect to the original stewards of the land,” she said.

She spends time doing research on the locations she visits to understand the history. And she hopes to help facilitate a deeper connection to the land and peoples who have populated the regions she enjoys recreationally and challenges others who are involved in outdoor spaces to do the same.

Hope to see you on the La Tierra Trails, Annijke. It's a couple minutes from my house by mountainbike and like you, I ride it both for fun and have a timed loop I ride to gauge my fitness. Or lack thereof...

We are lucky to have such resources in Santa Fe. Come one, come all!

Right on, Annijke! One of my most favorite mountain biking places is Dead Horse Point State Park in Moab with its stunning beautiful views. Locally, I really like the Santa Fe Rail Trail south of Rabbit Road about an hour or two before sunset.