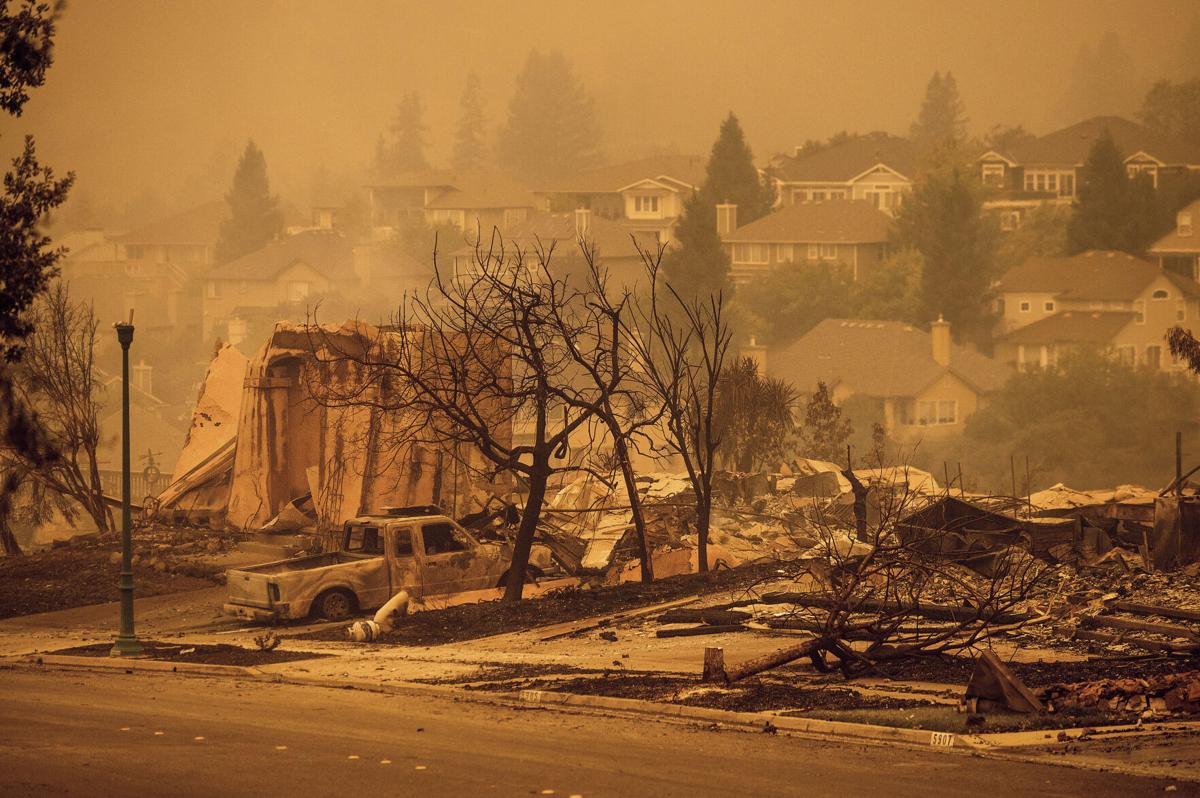 Homes leveled by the Glass Fire line a street in the Skyhawk neighborhood of Santa Rosa, Calif., on Sept. 28.

Amanda Harmon talks about evacuating her home in Spencer Heights after the Cameron Peak Fire started Aug. 13. The fire burned much of the property but not her home. She is staying in Fort Collins, Colo., until she is allowed back. Fire officials have said that might not be until after Thanksgiving.

Homes leveled by the Glass Fire line a street in the Skyhawk neighborhood of Santa Rosa, Calif., on Sept. 28.

Amanda Harmon talks about evacuating her home in Spencer Heights after the Cameron Peak Fire started Aug. 13. The fire burned much of the property but not her home. She is staying in Fort Collins, Colo., until she is allowed back. Fire officials have said that might not be until after Thanksgiving.

And she worked for it, too. Seven days a week, Harmon waited tables at a golf course and cleaned vacation rentals here, a remote community of 400 people west of Fort Collins that locals quietly speak of as a hidden gem without the glitz of Aspen or the popularity of Estes Park.

When she finally saved enough to buy a house in the Poudre Canyon, Harmon thought she’d never move back to the bustling Front Range.

“I feel like I played all my cards right,” she said. “And then one day, everything I’ve been working for is not there.”

On Aug. 13, Harmon and her family came back from a day rafting on the Colorado River to find the Cameron Peak Fire rapidly approaching their dream home. She grabbed family photos, her children’s old baby books and an assortment of clothes before fleeing to Fort Collins. Now she wonders if she’ll ever be able to call that place home again.

“It’s amazing how quickly something out of my control can devastate my life,” Harmon said.

As of Sunday, the Cameron Peak Fire had burned more than 126,000 acres in the sparsely populated Roosevelt National Forest since erupting in August, standing at 40 percent containment after a Labor Day heat wave caused the wildfire to triple in size.

Despite its status as the third-largest wildfire in Colorado history, Cameron Peak has not forced tens of thousands of evacuations or wiped out entire cities. But its flames have torched dreams and split up families.

Yet despite the blackened forest and a persistent anxiety about being forced to flee at a moment’s notice, many residents of Colorado’s northern mountains say that’s the price of living in picturesque wilderness.

“It’s something that comes with the territory,” said Silvia America Salido, who owns the Alpine Lodge at Red Feather Lakes. “Either you’re willing to risk it or you’re not.”

The natural beauty of the Poudre Canyon and surrounding mountains draws summer vacationers from the Front Range and out-of-staters looking to enjoy the outdoors.

And after the initial stay-at-home mandate for COVID-19, business had been booming for locals.

Then came the fire.

For June Alexander, that meant shoving essential items into an RV and bolting out of the canyon.

It’s been weeks since the approaching fire forced Alexander to leave the CanyonSide Campground in Bellvue, which she owns and calls home.

Alexander recently walked her dog Kya around a motel parking lot next to Interstate 25 in Loveland, which has been her makeshift home. It’s a welcome change from the previous month, when she slept in her cramped trailer at a nearby RV park, calling her insurance company as she wondered when she’d be allowed back to the campground.

“Like everybody, I’m just trying to figure out what to do next,” Alexander said.

The mandatory evacuations forced Salido to close the Alpine Lodge to the general public, eliminating all income for the family-owned campground. They’ve been letting firefighters stay there for free, offering their accommodations for however long crews need it.

Salido figures the family has enough money to stay afloat for a couple of months, but when they can resume operations is still up in the air.

“It’s affecting people not knowing the unknown,” she said. “It’s creating a lot of anxiety.”

Just up the road, business has been slow at the Golf Club at Fox Acres, the result of a road closure blocking the public from accessing the course.

A handful of golfers recently teed off under a hazy sky, taking advantage of the cooler weather. A few others ate quietly in the clubhouse restaurant.

Dawna Kennedy, general manager of the country club, said they’ve lost quite a bit of business since the fire started, breaking up what had been a busy streak after the state allowed golf courses to open during the governor’s safer-at-home phase.

She and her husband, the club’s executive chef, were forced to evacuate for one night after the fire got within 5 miles of Red Feather Lakes.

“We think about it daily,” Kennedy said of the fire. “Even things like the breeze and what direction it’s going.”

Harmon drove up to the golf course recently from Fort Collins to pick up a check, but she wonders how much longer she’ll make the commute.

She bought her property in tiny Spencer Heights four years ago out of foreclosure and poured money into revamping the house and surrounding land. The Cache la Poudre River is just feet away, where Harmon and her fiance spend the summers rafting. In the winter, they haul lumber to the wood-burning stove and cruise around on their snowmobiles. It’s quiet. Serene.

“This was our dream,” she said.

Harmon believes the house is intact, but firefighters burned the surrounding land in an effort to save the structure. They told her she might not be able to go back to the house until Thanksgiving, but even then she doesn’t know the extent of the smoke damage or how the fire will affect her tourist-based career.

“It’s hard to know that it’s never going to be the same,” she said.

As Harmon debates her future in the mountains, other residents maintain their loyalty to Colorado’s high country despite the anxiety.

Kennedy can’t imagine moving back to the Front Range, where she and her husband used to live and work. She finds closeness and spirituality in the mountains, where she loves to forage for wild mushrooms and hike through the Roosevelt National Forest.

“People who commit to living here are committed to this way of life,” Kennedy said. “If the fire did reach Red Feathers and something happened to our place, we would definitely rebuild.”

For Carla Ambrose, avoiding natural disasters is nothing new. She came to the area three years ago from Key Largo, Fla., soon after Hurricane Irma caused widespread destruction in the state. After that, Ambrose and her husband closed their eyes and pointed to a map of the U.S., pledging to move wherever they landed: Red Feather Lakes.

As the Cameron Peak Fire spread, emergency personnel urged them to leave.