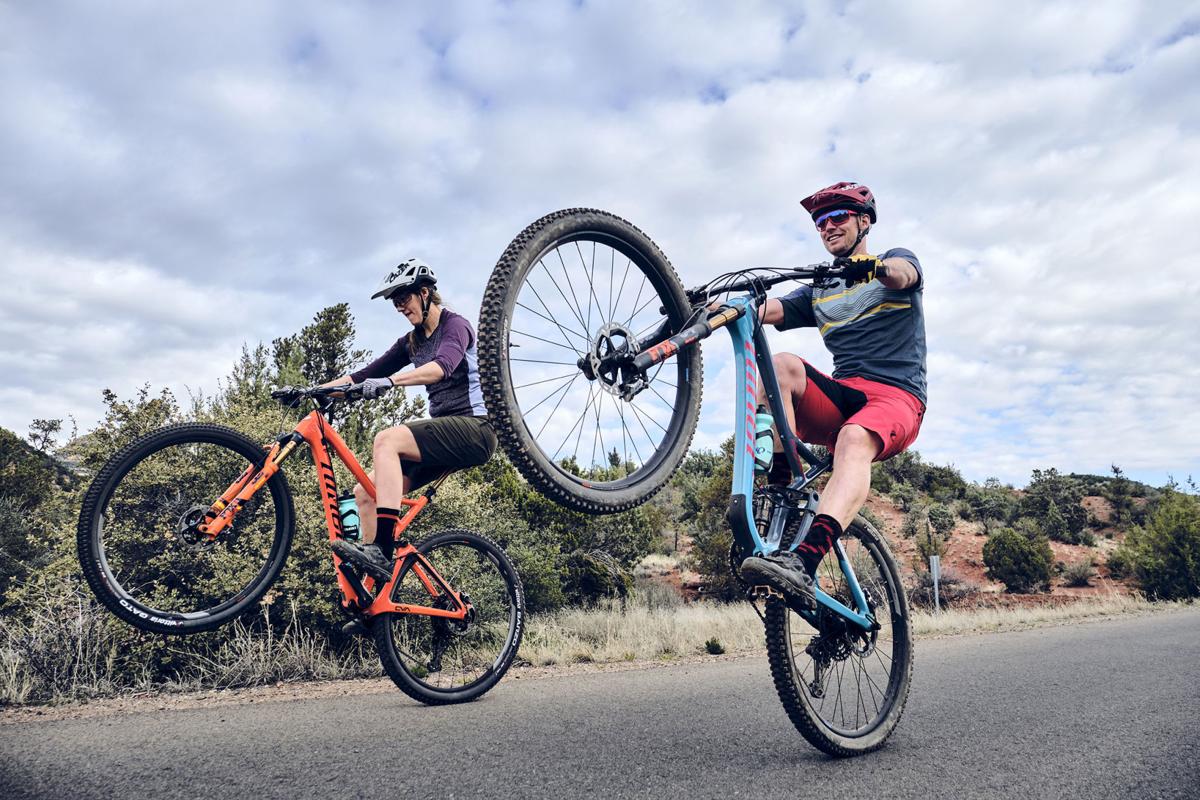 Syd Schulz, left, and Franklin have been traveling together as professional mountain bikers for the past six years but have had their season shut down indefinitely due to the novel coronavirus. 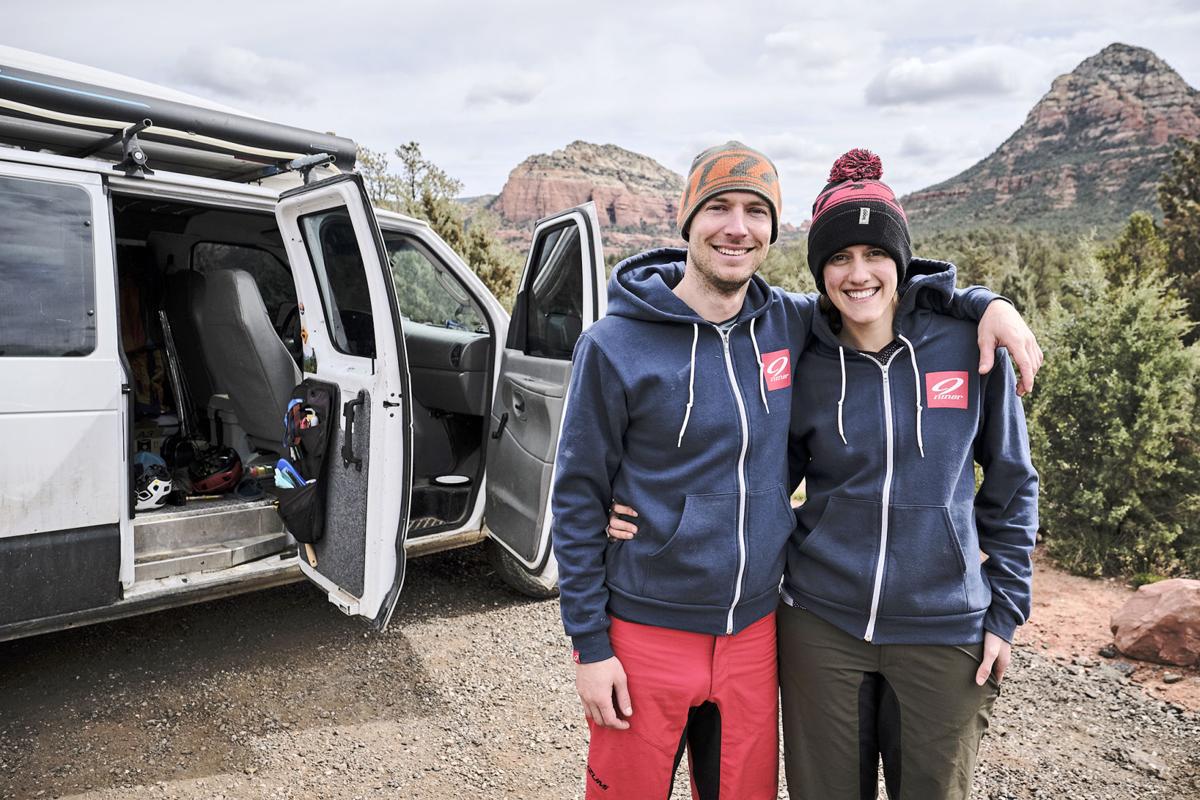 Macky Franklin, left, and Syd Schulz live out of their van while competing at mountain bike races across North America for about seven months each year. 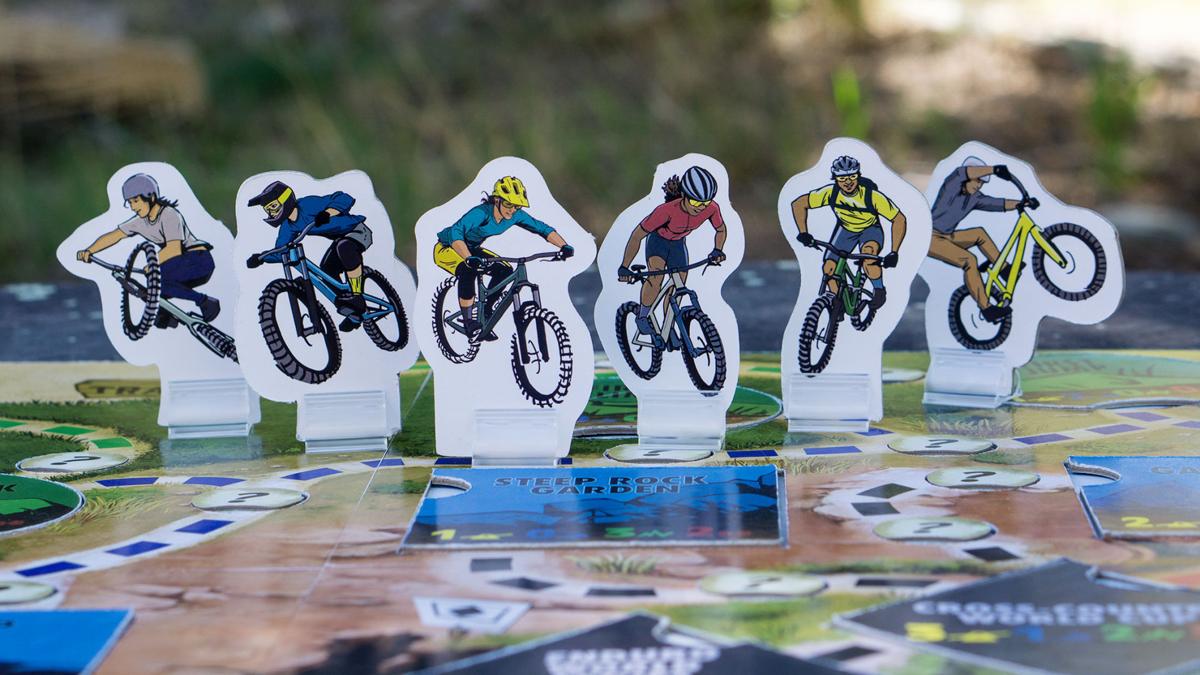 Franklin and Schulz developed a mountain biking board game called ‘Send It!’ and raised more than $50,000 through a Kickstarter campaign this spring. 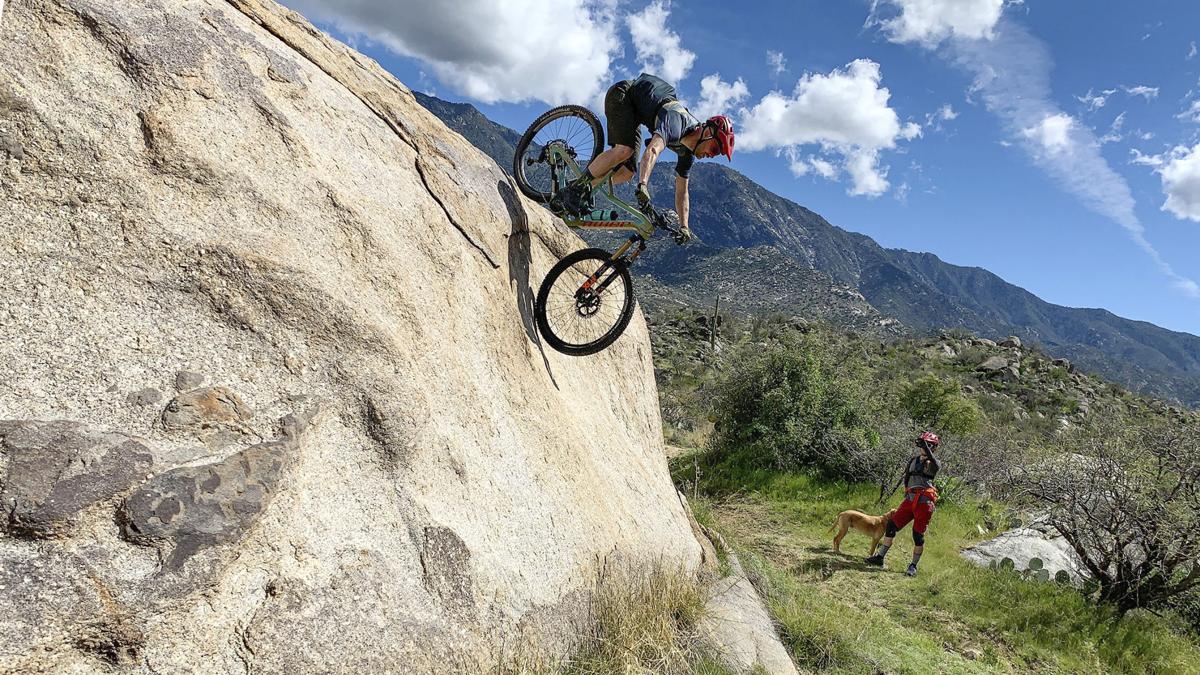 Professional mountain biker Macky Franklin, who lives in Arroyo Seco during the offseason, rides a rock slab near Tucson, Ariz., in March. The pandemic put on hold this year’s mountain biking season. 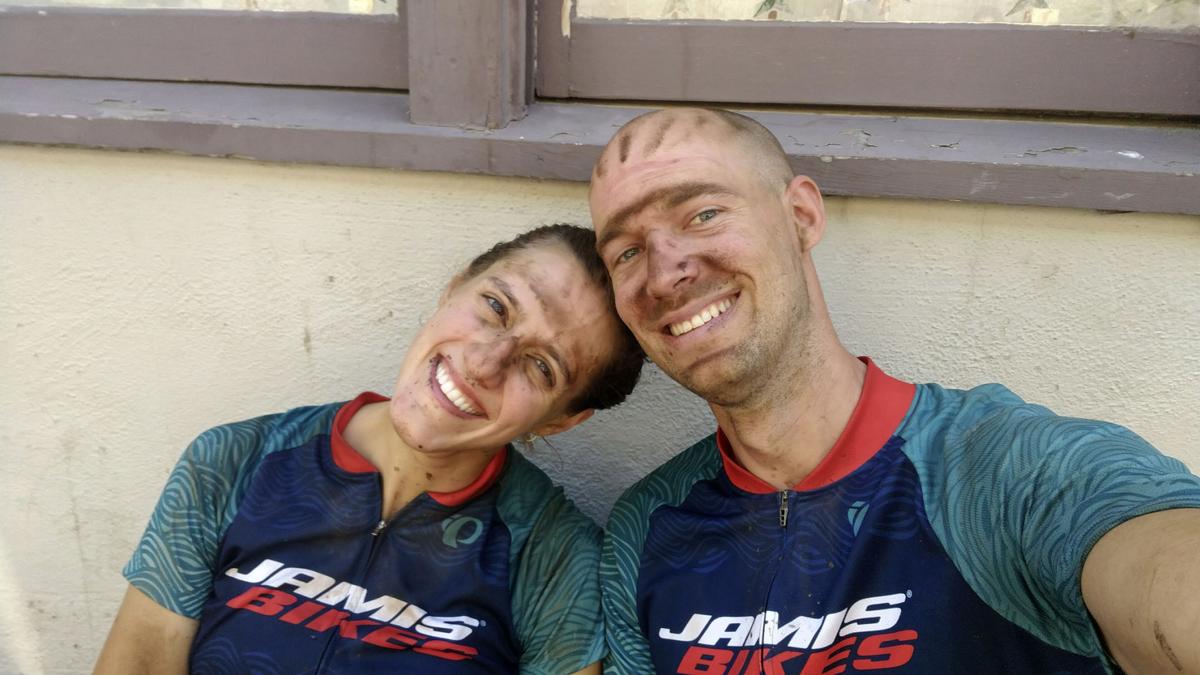 Syd Schulz, left, and Franklin have been traveling together as professional mountain bikers for the past six years but have had their season shut down indefinitely due to the novel coronavirus.

Macky Franklin, left, and Syd Schulz live out of their van while competing at mountain bike races across North America for about seven months each year.

Franklin and Schulz developed a mountain biking board game called ‘Send It!’ and raised more than $50,000 through a Kickstarter campaign this spring.

Professional mountain biker Macky Franklin, who lives in Arroyo Seco during the offseason, rides a rock slab near Tucson, Ariz., in March. The pandemic put on hold this year’s mountain biking season.

Syd Schulz and Macky Franklin still spend their nights asleep in a pop-top tent above the van they’ve lived out of while traveling to compete in some of the most high-profile professional mountain biking races in North America.

They dream of competing again, but when they wake up each morning they keep finding themselves in the driveway of Franklin’s childhood home in Arroyo Seco.

That’s where “Great White” — the couple’s converted 2006 Ford E-350 van that serves as their home and transportation during what’s generally a seven-month racing schedule — has been parked since early April. Their season put on hold by the COVID-19 pandemic just as it was getting started, the nomads have spent the last 10 weeks idling in Northern New Mexico while isolating with Franklin’s parents.

For the first time in the six years that Schulz, 29, and Franklin, 32, have been wandering the world together as pro mountain bikers, they’ve been stuck in an extended and indefinite holding pattern. The adventure lifestyle they’ve leveraged to cultivate a following of 50,000 subscribers to their YouTube channel is now marked by harrowing trips to the grocery store rather than heart-pumping races through the mountains.

“I think it has required a conscious reframing,” said Franklin, a graduate of Moreno Valley High School in Angel Fire who met Schulz at Middlebury College in Vermont. “I think both Syd and I could be frustrated normally because we want to be on the road, but we made the decision to accept our circumstances. There’s nothing we can do about this, and we’re looking at it as an opportunity, an escape from the real world for a little while.”

The change of pace and consistency of place have given Franklin and Schulz a chance to take on creative endeavors they wouldn’t have otherwise had time for.

They’ve remodeled a shed to serve as storage and a workshop for their many mountain bikes in Arroyo Seco, which has remained their home base over the years.

And, of all things, they’ve been working on developing a mountain biking board game called “Send It!” that just completed a successful Kickstarter funding campaign that raised over $50,000 in 30 days.

The idea formed over the winter while Franklin was recovering from a bad bike crash that resulted in a separated shoulder, stitches to his chin and a concussion. The head injury made it difficult for him to look at screens, so while he was recovering, he and Schulz spent a lot of time playing board games. Franklin came to realize there wasn’t a mountain biking board game out there, so he and Schulz set out to build a prototype.

In early May, Franklin and Schulz launched a 30-day Kickstarter campaign to fund the game’s production. They hit their goal of $25,000 within the first eight hours and eventually doubled that, thanks to 746 backers, to help bring the game to life.

“It’s been really cool seeing the response to Kickstarter,” said Schulz, a native of Athens, Ohio. “We had no idea what to expect when we launched it, especially during pandemic. It could have been a total flop. Instead, it’s turned out to be more of an opportunity.”

Franklin and Schulz are taking preorders for the game and plan on sending it out for the holidays in December. “Board game development” is something the couple would never have imagined being able to put on their résumés a year ago, but adapting, evolving and jumping at opportunities are traits they have learned to lean into.

The opportunity to travel the world and race mountain bikes with each other is something of a dream for Franklin and Schulz, but the life of a pro mountain biker is far from glamorous.

Most live out of their vehicles while driving from race to race. And Franklin said a competition that pays well might net a winner $1,500 at most. Generally, riders earn closer to a couple hundred dollars, he said. “You definitely sacrifice stability by living in a van,” Franklin said. “That’s something that I would say is not for everyone. We’ve gotten used to it. It’s really great when things are going well, really hard when they aren’t.”

“There’s definitely a van life burnout,” Schulz added. “When you get really tired or injured, all those extra logistics that go into it can add up. By mid-July, sometimes you’re just exhausted and don’t want to worry about things like where you’re going to fill up with water.”

Franklin has been racing at pro mountain biking’s highest level since 2006, but it wasn’t until 2014 that he and Schulz began to earn enough money through sponsorships to make a living at it.

Over the past few years, the couple have been working on growing a community of followers through online videos and social media while documenting their adventure lifestyle. Content on the “Syd and Macky” YouTube channel, where they release two videos a week, has 8.7 million views.

As their storytelling skills have grown, so has the subscriber base that comes to the channel for updates on van life and their mountain biking adventures.

“I think people want to have a reason to invest in you,” Schulz said. “If you’re just showing riding footage and they don’t know who you are, they don’t care.

“We’ve gotten more comfortable talking to the camera and talking to the audience. YouTube is not like television. It’s very different. There’s a level of intimacy and access that it affords.”

Some of their most loyal followers provide not just moral but monetary support. There are over 400 patrons who combine to provide Franklin and Schulz with about $2,700 per month through their Patreon account to help them cover expenses on the road. The extra money allows them to be less reliant on funding through sponsorships, which could dip if the industry has a rough year.

Franklin and Schulz aren’t sure what big project will come next, or when they’ll be able to get back on the road to compete in races.

For now, Franklin said they’re happy they get the chance to continue to connect with their online community and have a productive distraction during such uncertain times. “It’s been cool for us to provide content that we hope makes quarantining and social distancing a little bit more bearable for those who don’t have access to the outdoors like we do here.”

SEND IT! The Mountain Biking Board Game