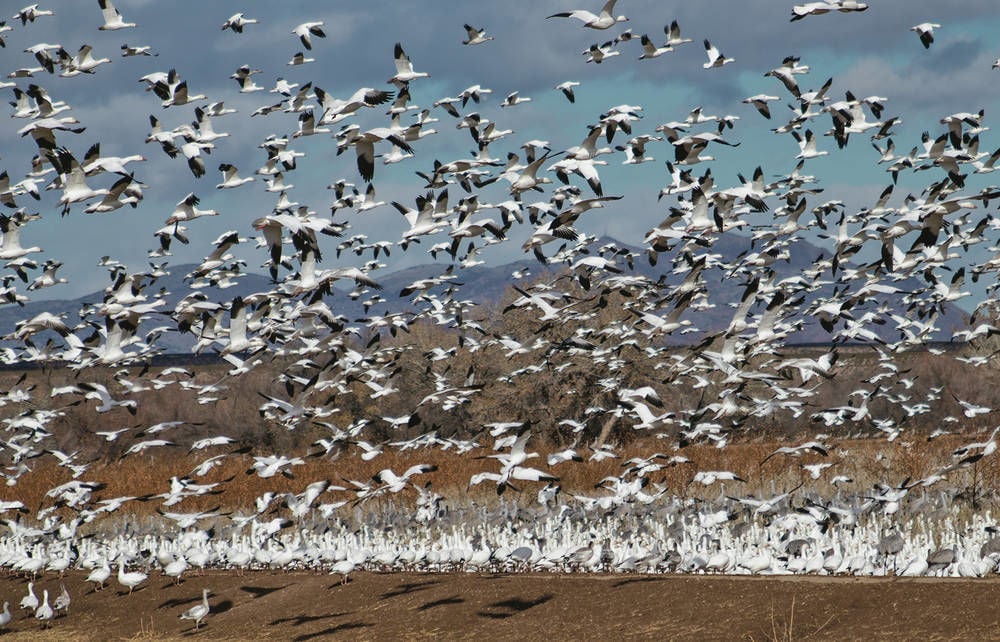 Snow geese erupted from a shoreline at Bosque Del Apache National Wildlife Refuge after a train horn startled them. The refuge is located in south-central New Mexico, about 150 miles from Santa Fe. 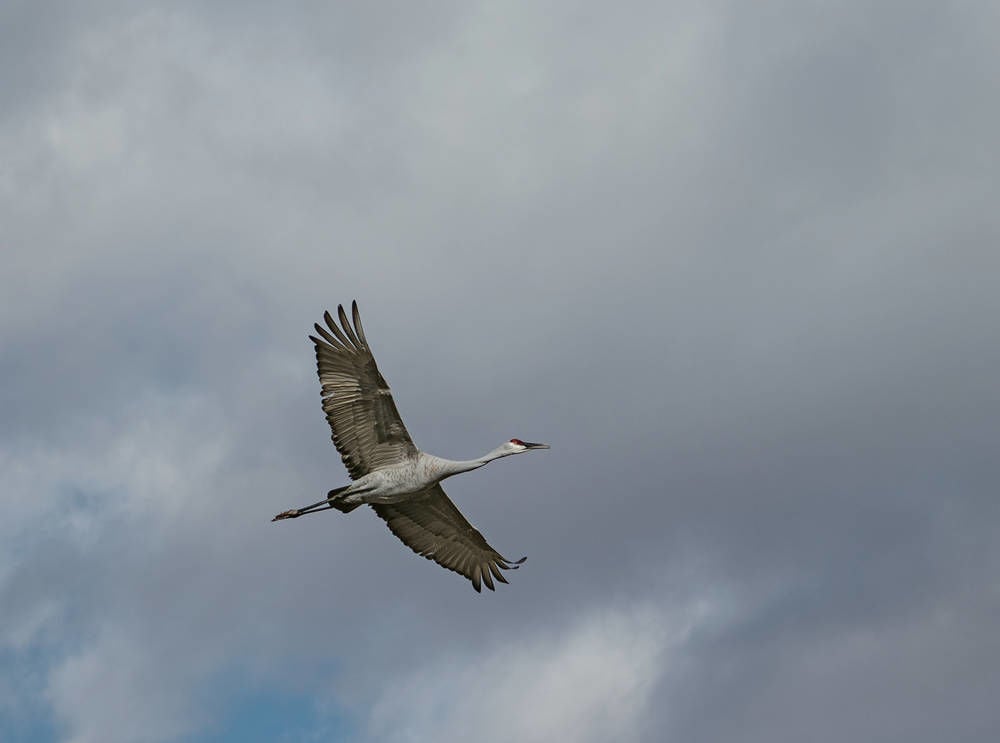 A sandhill crane flies over the Bosque Del Apache National Wildlife Refuge, which is a winte feeding ground for about 18,000 of the birds. Danielle Prokop/The New Mexican 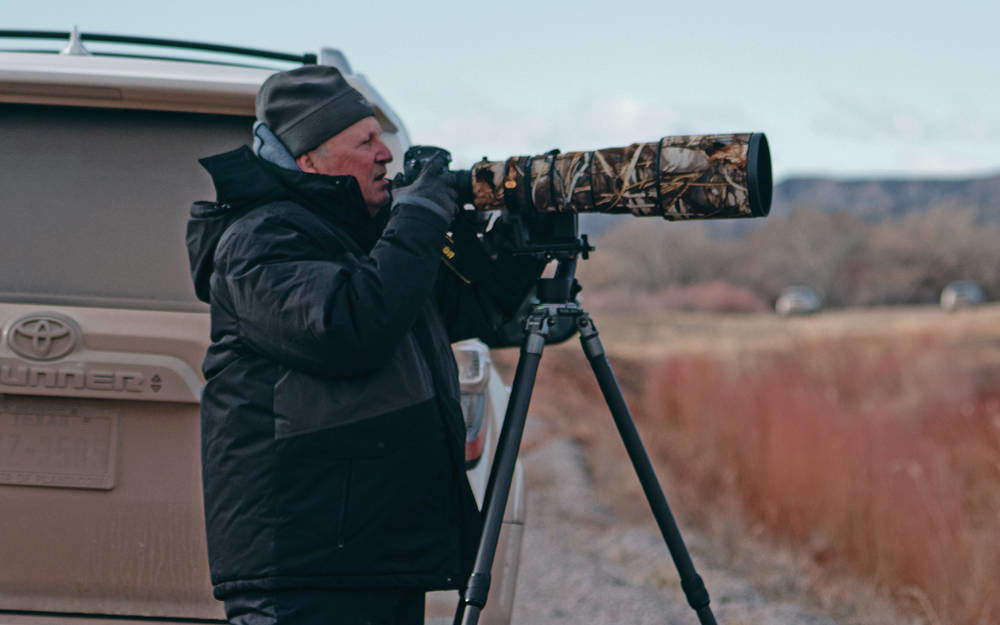 Arnon Wilson, 70, has traveled to the Bosque Del Apache National Wildlife Refuge the past 12 years to photograph sandhill cranes. ‘I’m addicted to the sounds they make,’ he said. Photos by Danielle ProkopThe New Mexican

Snow geese erupted from a shoreline at Bosque Del Apache National Wildlife Refuge after a train horn startled them. The refuge is located in south-central New Mexico, about 150 miles from Santa Fe.

A sandhill crane flies over the Bosque Del Apache National Wildlife Refuge, which is a winte feeding ground for about 18,000 of the birds. Danielle Prokop/The New Mexican

Arnon Wilson, 70, has traveled to the Bosque Del Apache National Wildlife Refuge the past 12 years to photograph sandhill cranes. ‘I’m addicted to the sounds they make,’ he said. Photos by Danielle ProkopThe New Mexican

The honks of thousands of snow geese carry on the cold wind, cutting across the throaty croaking of sandhill cranes as they pick their way delicately through the muddy cornfields. A train horn sounds. The birds erupt from the water — geese and cranes alike — their wings beating the air.

For the past 12 years, Arnon Wilson has traveled from Texas to see the cranes. He makes electronic signage in Dallas, but his love is photographing birds. He described the landscape as magical, how the lighting and his camera produce something unique each time. “I’m addicted to the sounds they make,” Wilson said. “My wife isn’t happy, but I can’t stay away from this place.”

He’s not the only one. The Bosque del Apache National Wildlife Refuge in south-central New Mexico had 6,628 visitors in November and an estimated 200,000 waterfowl, 18,000 greater sandhill cranes and tens of thousands of other water birds and shorebirds.

The birds start leaving the refuge around mid-February, and until then, people stream in to see them. It’s an international draw and brings in semiprofessional or professional photographers who enjoy the photography workshops or shooting on their own.

But wildlife advocates are worried about the birds’ future. A recent report from the National Audubon Society found two-thirds of North American birds are in danger of extinction this century because of the effects of climate change and 48 percent of New Mexico’s birds are at risk.

According to Audubon New Mexico, the Rio Grande corridor is an important wintering and nesting space, supporting hundreds of thousands of migratory birds. But observers are seeing more and more of the river drying annually, including stretches within the middle Rio Grande.

“The birding scene here is unique because it’s so diverse,” he said, attributing that fact to the number of habitats available: grasslands, rivers, forests and mountains. But in the 1980s, Hayes said, the Rocky Mountain flock of sandhill cranes dwindled to about 200 birds. So the U.S. Forest Service and local, public and private entities stepped in.

“Individually, they were able to recover those numbers,” Hayes said. “Both by managing the habitat for feeding grounds and providing winter foraging to supplement the birds’ diet.”

The population now hovers near 20,000. But Hayes said the risk is not over. “While we’ve done an incredible job of recovering sandhill crane populations and getting them stable, the future for them is scary,” he said, adding that their breeding grounds in Idaho, Montana, Western Wyoming and Northern Colorado are likely to disappear, according to climate projections over the next few decades.

In 2018, record low snowpack upstream saw unprecedented Rio Grande dryout at Socorro near the refuge in April, when it’s supposed to be running near its highest. The continued dryout prompted local governments to agree to release 324 million gallons of stored water.

Sara Wright, 74, has spent winters in Abiquiu for the past four years, hiding from Maine’s brutal season. Wright has a doctorate in ethology, the study of animal behavior in the wild. Her hobby has been documenting the wildlife she encounters during her daily morning walks, whether in Maine or New Mexico. She said this winter has been different from last year because of high waters from the Rio Chama, a major tributary of the Rio Grande. She said it’s eliminated a lot of roosting areas for waterfowl and cranes near her house, but has also made it harder for other wildlife in the area.

“The water is so swollen. It’s a maelstrom down there. It’s ripping away the banks and there’s no place for wildlife to stop and feed or even get to the water,” Wright said.

The Rio Chama is 85 percent higher than normal and is “currently sitting at very high levels for this time of year,” according to data from the Natural Resources Conservation Service. The river at this time of year is usually just under 2 feet deep but is running at over 3½ feet. She attributed the change to human-caused climate impacts and is worried the loss of the wetland area would change the flyways of migratory birds.

She eagerly waits to see the cranes fly south, but she’s seen very few this year.

“We’re talking about seeing two or three or maybe five at a time,” she said. “Last year, huge swaths of them would fly over the house with those incredible cries. But this year, it feels like living in a wasteland.”

While Bosque del Apache National Wildlife Refuge is recognized as one of the top birdwatching destinations in America, New Mexico is home to plenty of other choice locales to spot colorful and unique birds.