A blue sky and distant peak reflect off the surface of a pond near Stewart Lake in the Pecos Wilderness. 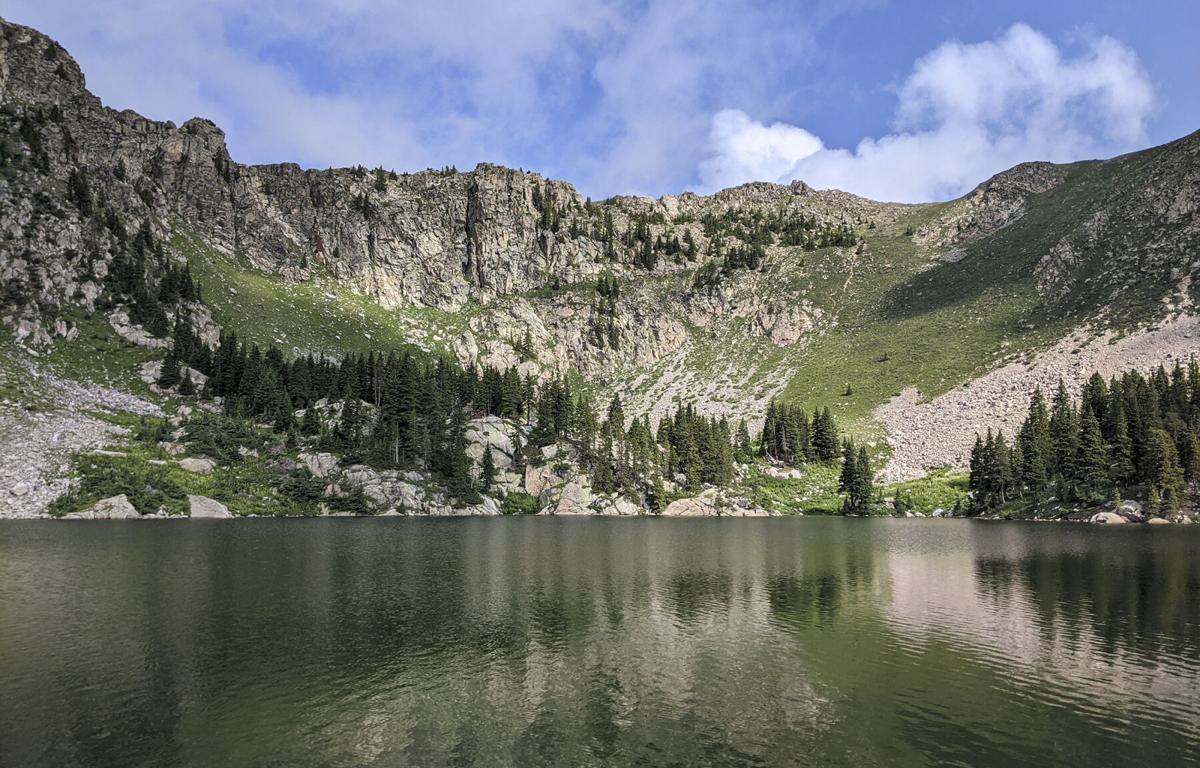 Dramatic cliffs below Santa Fe Baldy rise above Lake Katherine, the largest and deepest lake in the Pecos Wilderness. 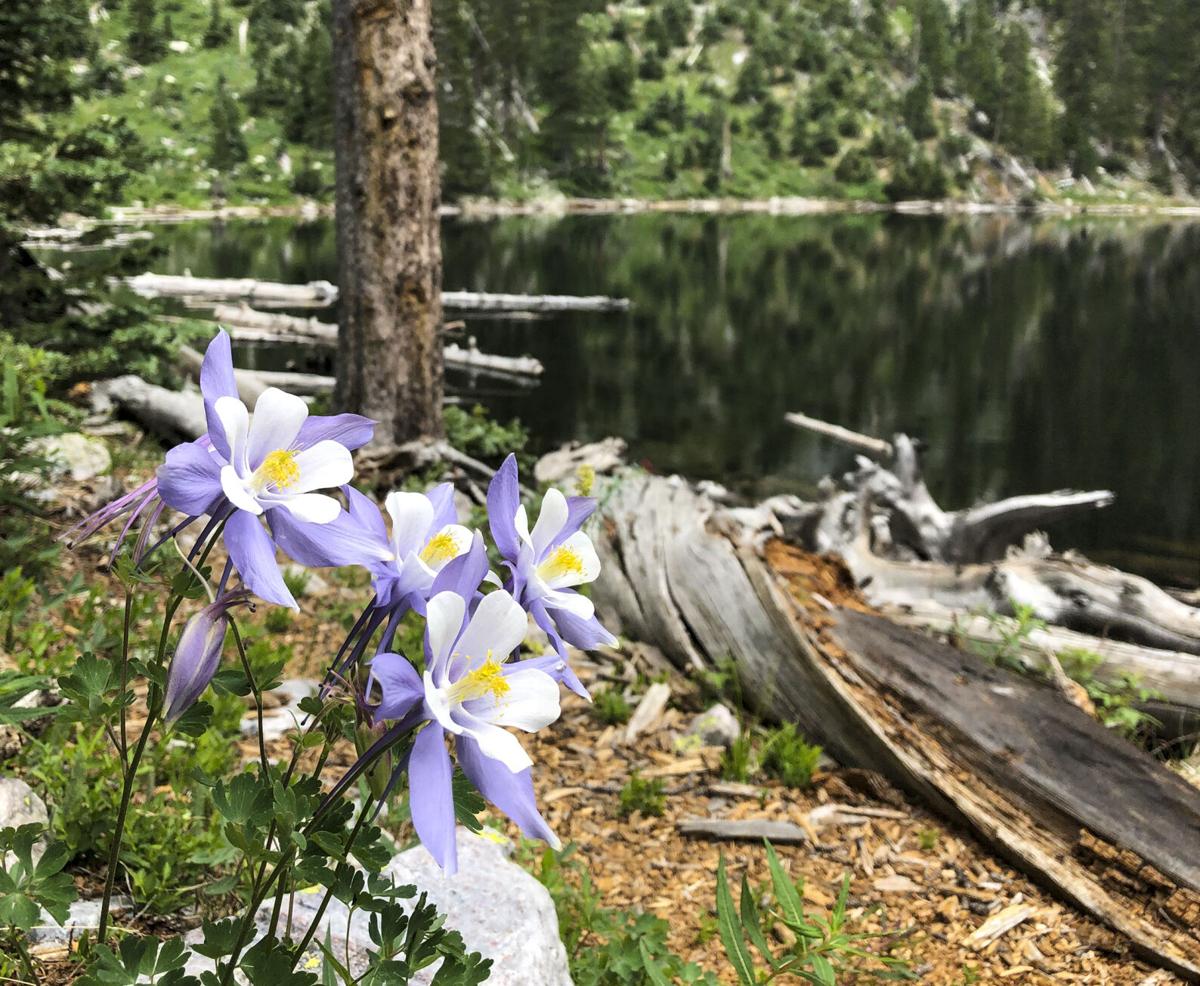 A cluster of columbine grow alongside San Leonardo Lake in the Pecos Wilderness. 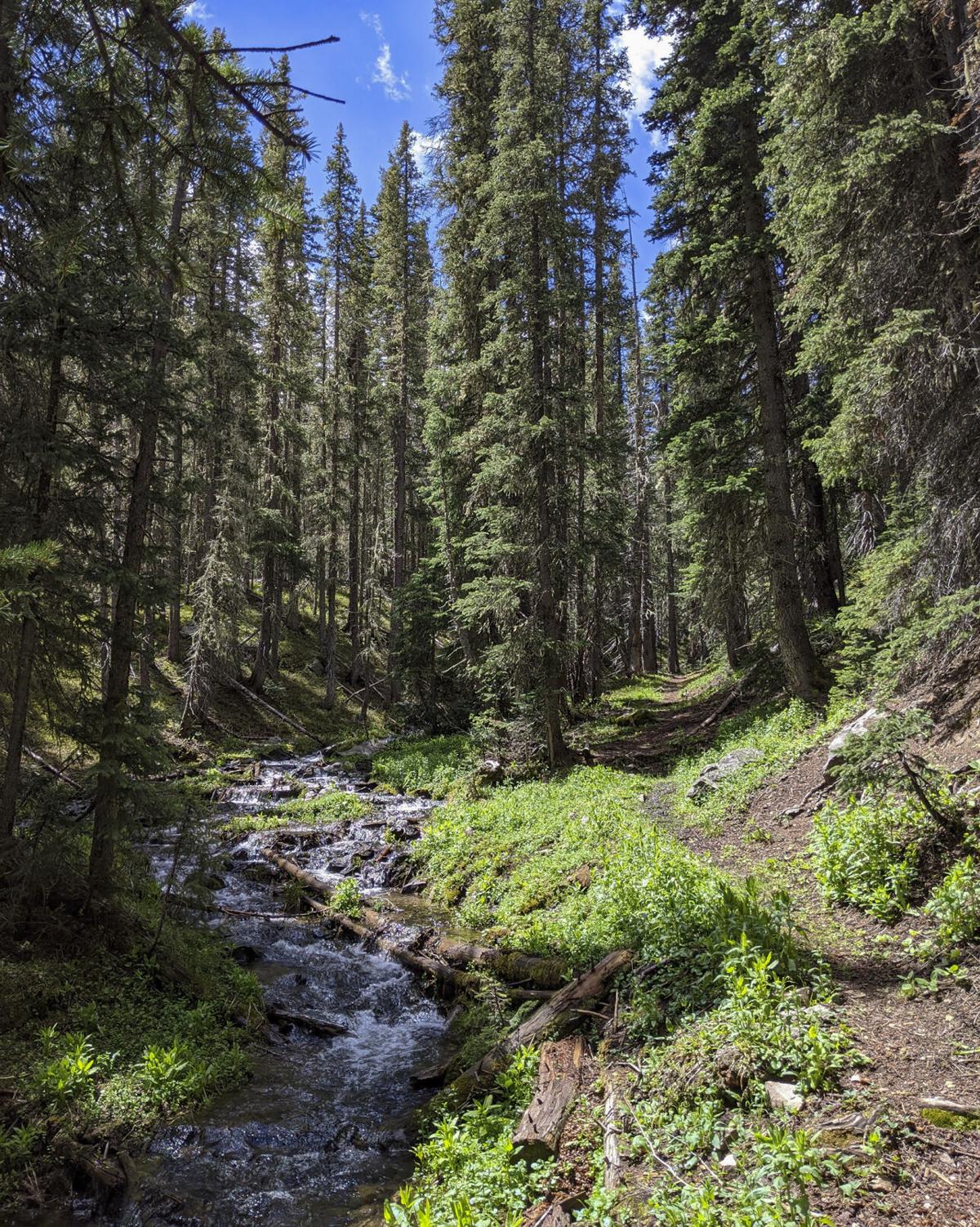 Goose Creek Trail near Red River follows Goose Creek for 6 miles and more than 3,000 feet in elevation gain up to Goose Lake, which sits directly below Gold Hill. 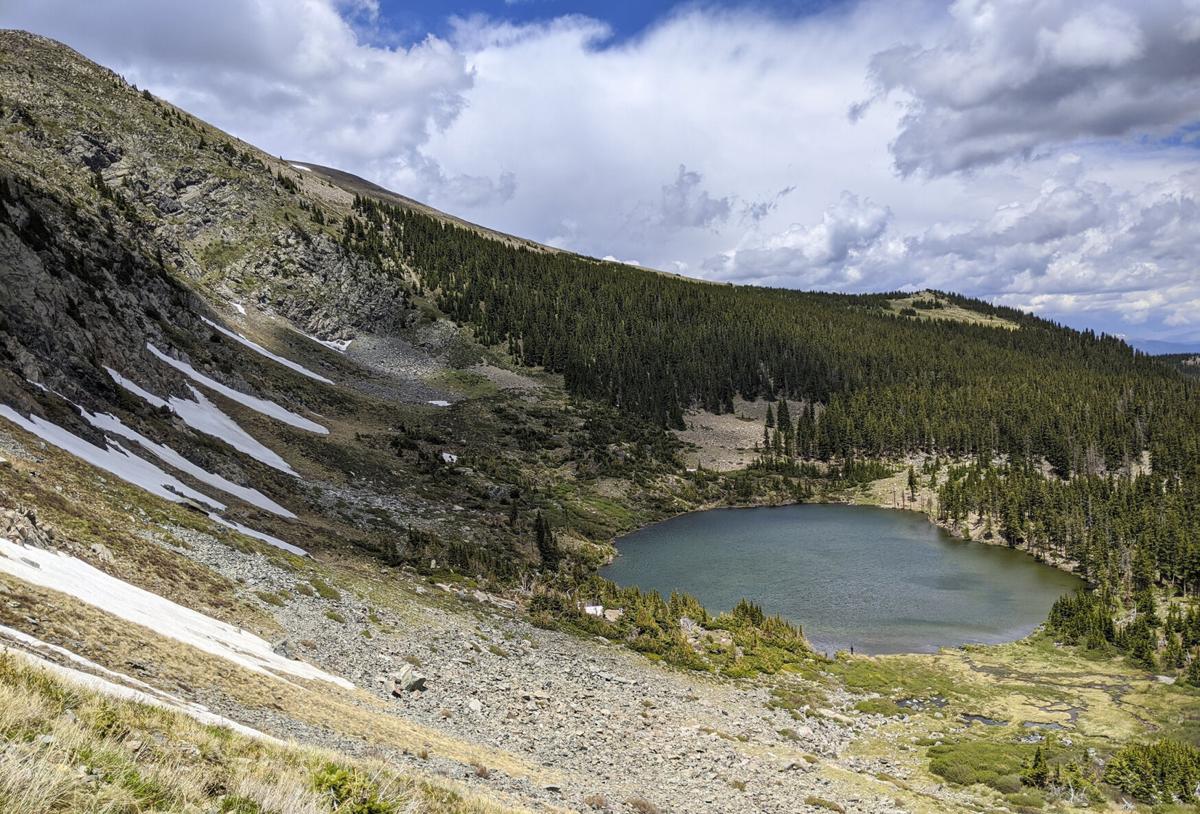 A blue sky and distant peak reflect off the surface of a pond near Stewart Lake in the Pecos Wilderness.

Ignorance and curiosity led me thigh-deep in snow on a steep mountain slope during my first attempt to reach Nambé Lake in May 2019, one that ended with frigid legs, soggy socks and me well short of the ultimate goal.

A second attempt a couple of weeks later got me a little closer to the lake with a lot less postholing, but snowmelt from a bountiful winter created a sloppy, boggy mess of a meadow that turned me back once more.

Since I’d moved to Santa Fe in March 2019, I’d been itching to lay my eyes on the alpine lakes of the Pecos Wilderness. It took three tries to reach my first lake, but just one visit got me hooked on trekking to more.

Dazzling jewels set in stone and scattered throughout the Sangre de Cristo range, Northern New Mexico’s mountain lakes offer some of the most stunning slices of paradise in the state.

But time at the lakes must be earned.

Most of the few dozen alpine lakes are accessible only by trail and require a round-trip hike of 4 to 16 miles, sometimes more, with elevation gains ranging from 1,000 to 3,000-plus feet.

The effort is well worth the reward.

Trails to lakes almost always follow streams that flow from the lakes down the mountain. Lush forests and wildflowers of all colors line the paths in the summer months, making it easy to forget you’re in an arid state where water is in such short supply.

The lakes themselves are cradled in cirques, which are cupped valleys below mountain peaks that were formed by glacial erosion thousands of years ago. These natural lakes are minuscule compared to man-made reservoirs like Abiquiú or Heron lakes that are more popular for boating and recreation, but the impression they leave on those who visit is immense.

Nambé Lake near Santa Fe and Williams Lake north of Taos are two of the most accessible and heavily trafficked of the lakes. The hike to Nambé Lake and back is about 7 miles and begins at the Santa Fe ski basin. Williams Lake, which sits below Wheeler Peak, is a 4.2-mile out-and-back, which starts at Taos Ski Valley.

They’re a great introduction to the beauty of the state’s alpine lakes, but not always so great if you want to find peace and solitude.

When I’m climbing a mountain, I enjoy chatting and sharing stories with other hikers I meet at the summit as we gawk at the breathtaking views. When I’m at a lake, I want to feel like I’m the only one there under the towering cliffs, to appreciate the silence and to tune myself to the stillness of the water.

Hiking to a new lake is always a treat, and it’s exciting to identify favorites you know you’ll return to again and again.

Twice as far as Nambé Lake, Lake Katherine is a popular backpacking destination that many also make as a 13.5-mile day hike from the ski basin. It’s nestled in a dramatic cirque on Santa Fe Baldy’s northeastern slope.

Sitting at 11,700 feet in elevation, Lake Katherine is one of the highest lakes in New Mexico. It’s also the largest and deepest lake in the Pecos Wilderness. Backcountry anglers frequent the lake, where they fish for cutthroat and rainbow trout.

Stewart Lake has become another lake I always find myself coming back to, partly because of the variety of ways to reach it. I’ve taken three different routes to Stewart Lake, ranging in length from about 10 miles on the Pecos Canyon side to nearly 18 miles from the Santa Fe ski basin.

I usually see several hikers at Lake Katherine and a handful at Stewart Lake. If I want a shot at having a lake to myself, I’ll head to Lake Johnson. The views aren’t quite as impressive at Johnson, but it’s still a beautiful place to spend an hour or so and soak your feet after hiking about 7 miles from the Panchuela Trailhead near Cowles.

To me, the Trampas Lakes east of the village of Trampas have the most gorgeous backdrop, with the sheer cliffs of the Truchas Peaks complex rising more than 1,200 feet above twin lakes.

Goose Lake was one of the best workouts. The trail starts near Red River and follows Goose Creek 6 miles and 3,200 feet in elevation up to the lake, which is also accessible via off-highway vehicle from Forest Road 486. From there, you’re directly below the 12,760-foot Gold Hill and have the option of climbing an additional 1,100 feet for a truly spectacular panorama of Taos Ski Valley and the surrounding mountains.

Lost Lake Trail, which also begins near Red River, hugs the side of a ridgeline that’s mostly exposed for the final mile leading up to the lake. The expansive views from this section of the 12-mile out-and-back were more memorable to me than the lake itself. Continuing past this lake brings you to yet another, Horseshoe Lake, and then offers a less-traveled route to the summit of Wheeler Peak, New Mexico’s highest point at 13,161 feet.

Hiking to mountain lakes during the monsoon season presents the risk of getting caught in a treacherous storm. Starting early in the morning and reaching the destination before 1 p.m. is advisable. It’s usually best to turn back and try another day if there’s lightning and ominous clouds nearby.

When the conditions are right, there’s nothing better than Zenning out next to the calm water after a challenging climb. I’ve hiked to over a dozen of Northern New Mexico’s alpine lakes so far, and each visit imparts a desire to seek out more.