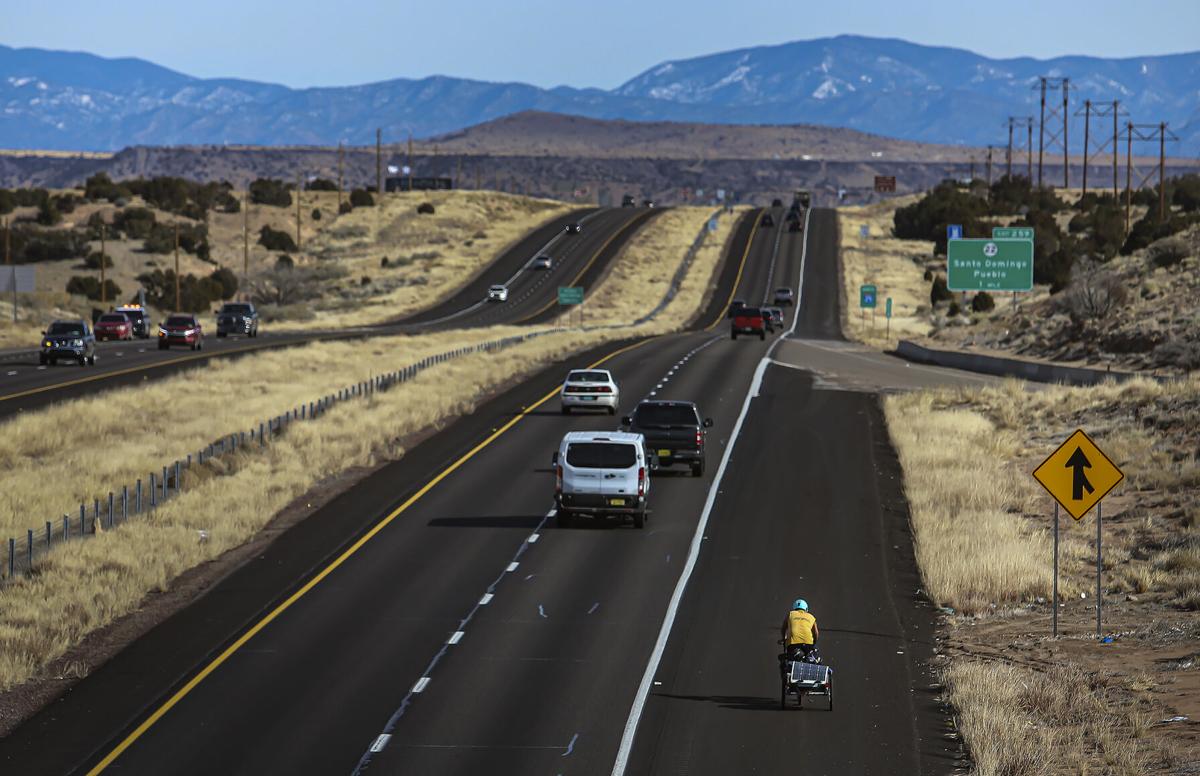 Bob Barnes rides his bicycle Thursday north on I-25 on his way from Albuquerque to Santa Fe. The 52-year-old is attempting to visit every state capitol and the U.S. Capitol in a year. 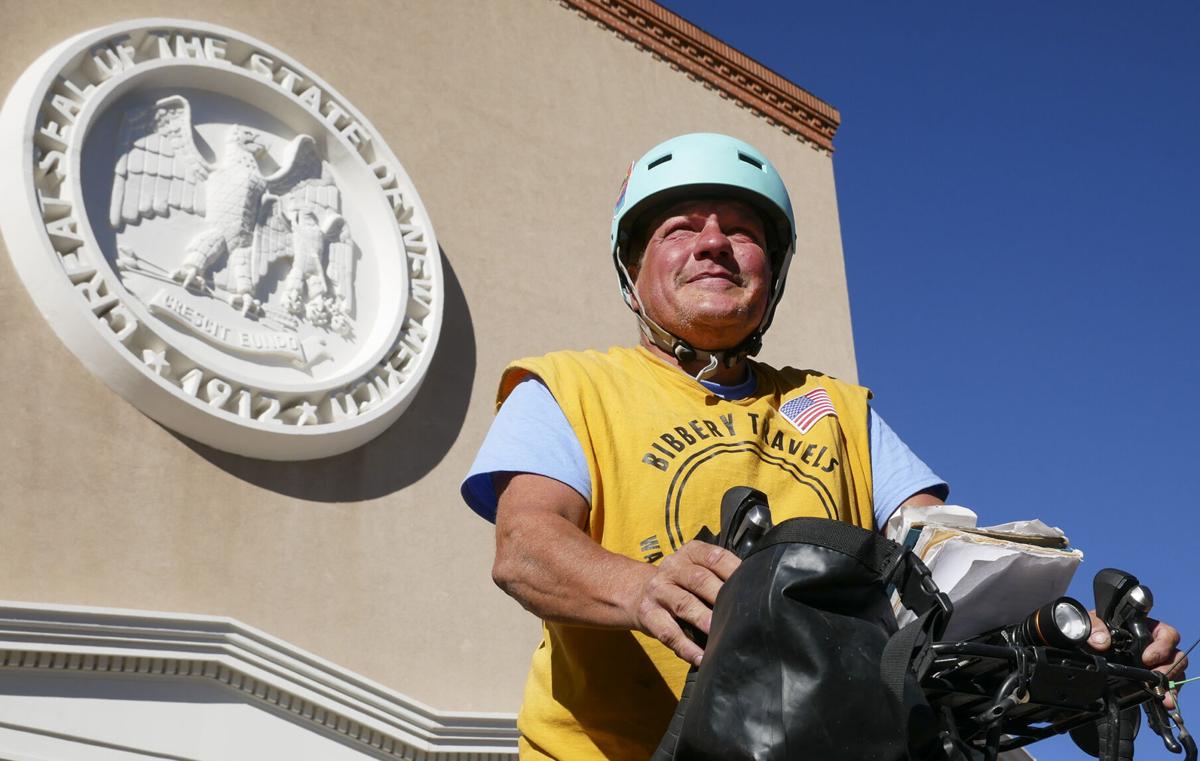 Barnes’ visit to the Roundhouse on Friday was the 25th capitol he’s visited, the halfway point of his “Great American Triple Switchback.” 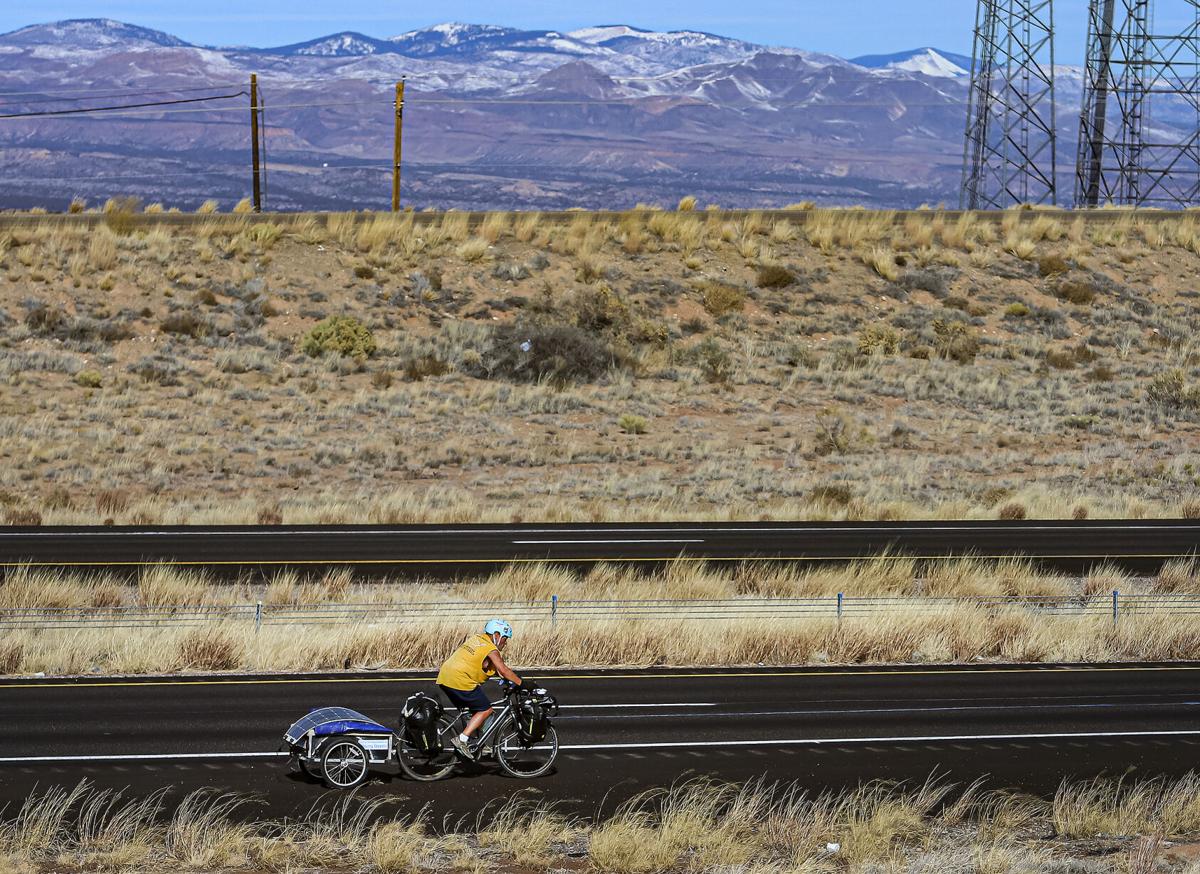 Barnes pulls a trailer behind his bike that contains his tent and sleeping bag and has solar panels to charge his cellphone and lights. 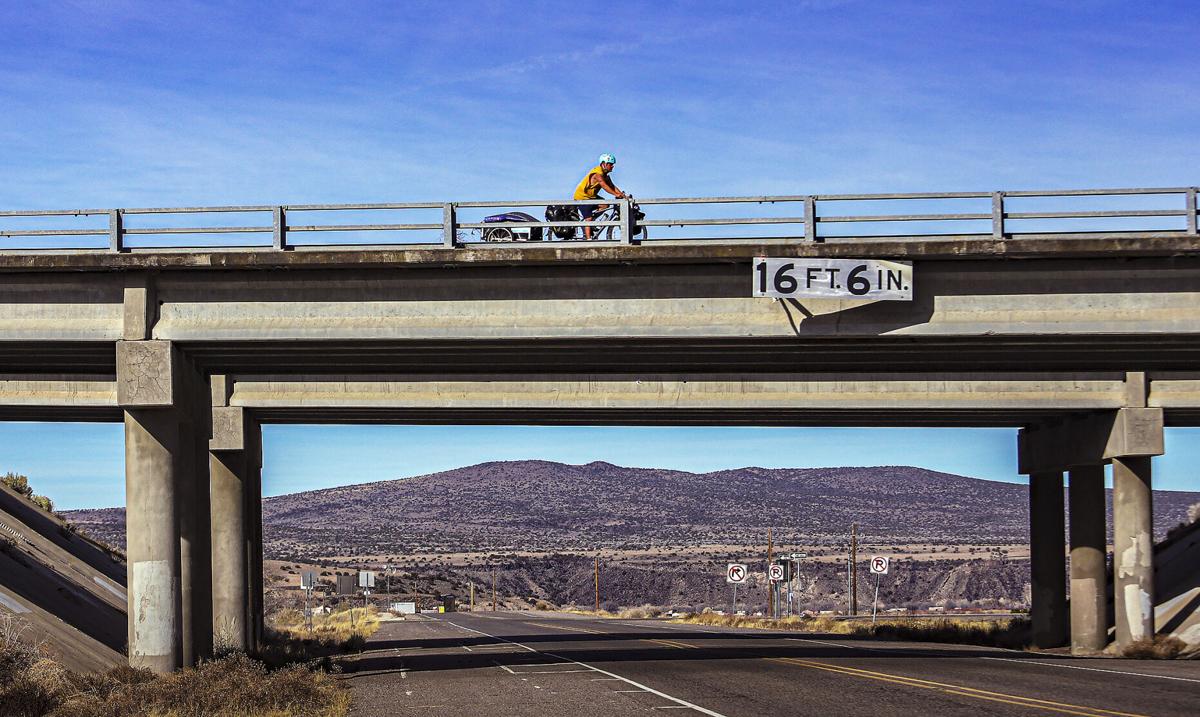 Bob Barnes rides his bicycle north on I-25 on Thursday on his way from Albuquerque to Santa Fe. 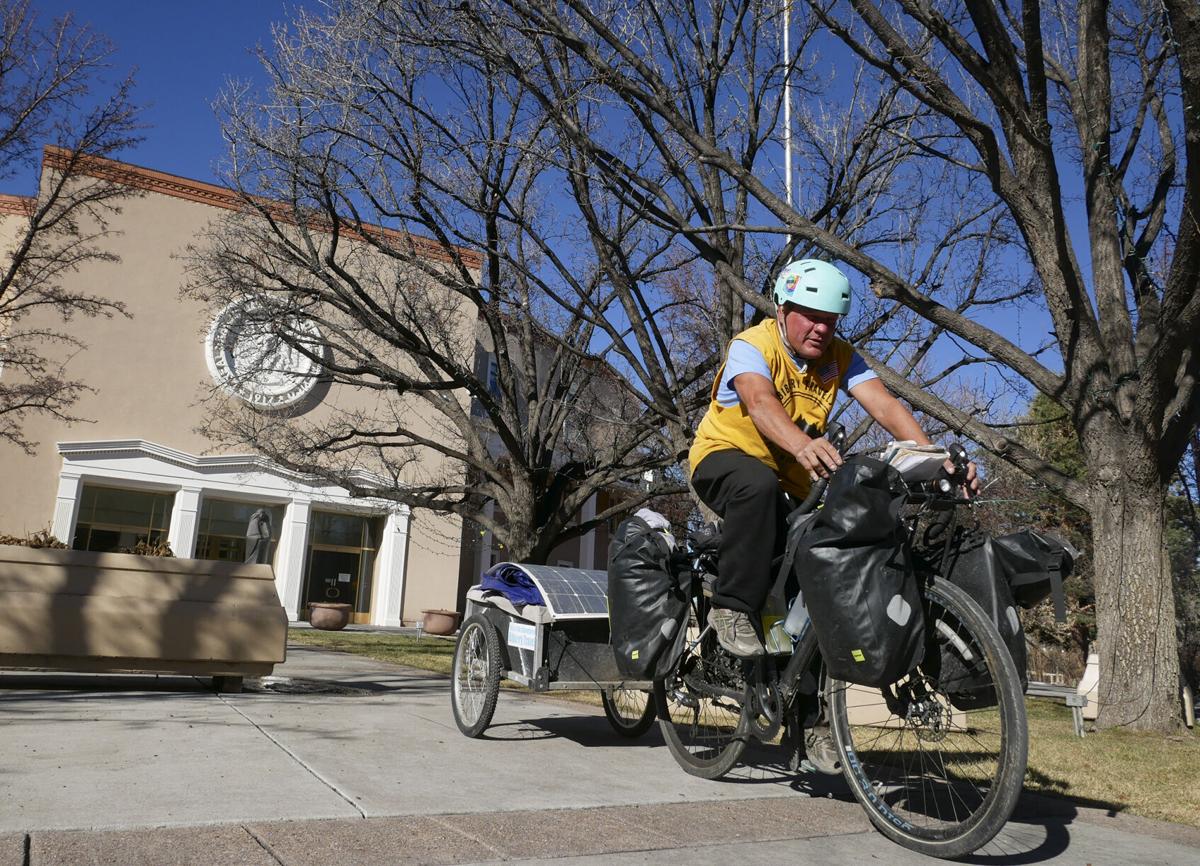 Bob Barnes departs from the Roundhouse on Friday, having reached the halfway point of his goal of cycling to all 50 state capitols in 12 months on a trip he calls the ‘Great American Triple Switchback.’ He left Syracuse, New York, on Aug. 1 and has ridden more than 7,000 miles so far.

Bob Barnes rides his bicycle Thursday north on I-25 on his way from Albuquerque to Santa Fe. The 52-year-old is attempting to visit every state capitol and the U.S. Capitol in a year.

Bob Barnes departs from the Roundhouse on Friday, having reached the halfway point of his goal of cycling to all 50 state capitols in 12 months on a trip he calls the ‘Great American Triple Switchback.’ He left Syracuse, New York, on Aug. 1 and has ridden more than 7,000 miles so far.

Bob Barnes has spent the past handful of years shuttling other people where they need to go as an Uber driver in Syracuse, N.Y. On Aug. 1, he set off on a ride for himself.

The scale of the ride is hard to fathom, and it’s an experience he’ll never forget.

The affable and tenacious 52-year-old is in the middle of a 15,000-plus-mile cycling odyssey with the goal of visiting every state capitol, plus the U.S. Capitol in Washington, D.C., within 12 months. He calls the trek the “Great American Triple Switchback” because it will take him across the country not once but three times.

If he completes the trip, he will have traveled a distance greater than half the circumference of the Earth.

Barnes pedaled his way to the Roundhouse in Santa Fe on Friday, Day 160 of his journey, to tick off his 25th capitol. He has ridden more than 7,000 miles so far, averaging 40 to 50 miles per day, and he’s showing no signs of letting up as he barrels down on Austin, Texas, atop his trusty bike he affectionately calls Seabiscuit 2.

“I feel good, I feel strong, and I’m still getting stronger as I go,” said Barnes, who said he has lost 27 pounds since he started the ride.

Barnes began his trip in Syracuse and tagged the capitols of the Northeast before dipping down the East Coast to North Carolina and then slicing west across the middle of the country.

He hit California, including a ride along the Pacific coastline down breathtaking California State Route 1, and visited Tijuana, Mexico, for fun. Now he’s headed back east to string together the capitols of the Southern states. When he reaches Florida, he’ll head north to Ohio and make his final switchback west across the Lower 48’s northern states.

To cap the trip, he’ll ride from Olympia, Wash., to Prince Rupert, British Columbia, where in July he plans to catch a ferry to Juneau, Ala.; there’s no way to reach Juneau by road. Finally, he hopes to fly to Hawaii, bike to the capitol in Honolulu and take some well-deserved time to rest and relax on the beach.

Barnes hadn’t seen large swaths of America until this monumental adventure. Everything is fresh in his eyes, and the promise of new discoveries ahead drives him to push through the challenges of tough climbs, flat tires or tired legs.

“Every day is like the first day of a vacation. It’s new and exciting every single day,” Barnes said.

“It’s everything you think it would be. You get on your bike and you just ride; it’s like a big neighborhood. But it also shrinks the country because now you know more of it.”

Peanut butter sandwiches, canned soup and morning coffee and donuts help Barnes power through his days. At night, he takes his tent and sleeping bag out of the small trailer he pulls behind his bike and sets up camp.

He has only spent nine nights in a hotel, staying inside to avoid hazardous conditions. In the past couple of weeks he ran into a snowstorm heading into Flagstaff and had to hole up in Gallup to wait out a winter storm warning.

Much of Barnes’ trip has been crowdfunded. He has raised nearly $5,000 through donations to a GoFundMe campaign. The money goes primarily toward food, water, bike repairs, campsites and other expenses. He hopes there will also be enough for that flight to Hawaii to cap off his trip.

In return, Barnes provides updates on his progress three times a day through his Bibbery Travels Facebook page (Bibbery is a nickname he picked up in college). The posts include photos of what he has seen and descriptions of his encounters.

He powers his phone and his lights with the help of a solar panel he carries on top of his trailer.

Barnes has built a modest but active following of more than 1,200 people on his Facebook page. Most of his posts receive several comments that include words of encouragement, questions or remarks on what he has shared. He regularly responds to many of them.

He said the interactions make him feel like he has a group of hundreds of people traveling along with him, which provides a boost of motivation.

While pedaling the pavement, he also has received an “overwhelming” amount of support.

“Anywhere you go in the country is going to be the same thing but different,” Barnes said. “People are people; I find everybody is kind. There are different cultures and different ways of life, but everybody is human.”

Truck drivers have been particularly thoughtful when he’s riding on the shoulders of interstates. He has had two instances in which a trucker has stopped ahead of him to give him water when he passes by.

Barnes also tries to give back as much as he can. He donates blood every 60 days and volunteers his time on the holidays. He spent Thanksgiving helping out at an American Legion dinner in Salinas, Calif., and Christmas assisting at a Salvation Army dinner in Phoenix.

“I’m a big fan of paying it forward and giving back,” he said. “I like to do what I can do with what I have. I don’t have money, but I can do other things.”

It’s strange to hear him say it, considering what he’s currently doing, but Barnes calls himself an underachiever. He said he had a couple of small cleaning businesses in his 20s and 30s, and now he drives Uber to pay the bills.

“I hate to say it, but I’ve done nothing exciting, as far as work, in my life,” Barnes said.

Outside of work, however, he has always been active and goal-oriented.

Barnes said he has completed 15 full marathons, and three years ago he did a 5,800-mile bike tour across the northern portion of the country.

This trip is by far his biggest challenge to date and his most fulfilling.

He’s learned a lot about the country — like that it can snow heavily in Arizona and New Mexico — and a lot about himself.

Barnes said he’s going to have a problem when this trip is over. What do you do after living on the road for a year and completing the adventure of a lifetime?

“I have to prepare myself for the end and either come up with something else or just learn how to relax a little bit,” Barnes said. “Life is going to be like a wave that hits me from behind.”

Fortunately, he’s got at least 8,000 more miles before he has to face that reality. He can spend a bit of that time thinking about what comes next, but most of the time he said he’ll be focusing on the present and the remarkable journey he’s on.

He hopes his story inspires others to take the leap and pursue their dreams, too, while they physically still can.

“A lot of people talk about it, but they don’t do it,” Barnes said. “People need to do it.”

An incredible journey and I,too, would loev to have met him while he was here. Just one nitpicky point of the story:

" there’s no way to reach Juneau by road."

There is if you don't mind going through Canada. A friend rode from Juneau to Missouri back in the late 80s.

Hi, David. I had to look this up when writing the story to confirm what Bob told me. It is possible to reach Juneau with a car, but it requires getting on a ferry. The city is not connected to the continental highway system due to the surrounding terrain of ice fields, mountains and ocean. The area is serviced by the ferries of the Alaska Marine Highway System.

What a remarkable man and inspiring story! He is worried about what to do after the trip is complete. He could easily switch to a "different goal" and keep going. He enjoys people and the biking. Here are some examples: Visit each of America's National Parks, every Presidential Library, bike the Trans-Canada Highway, bike every US route that runs between the northern and southern border, bike both sides of the Mississippi from either end and back. Switch from using main freeways to biking the amazing/paved backroads of America. The latter can be done limiting the adventure to a specific state and trying to visit every State Park & National Heritage Site within it. Create a Fall Colors bike tour, a Spring floral awakening tour of the Southeast. I'm sure others reading about him can help suggest all kinds of great options for him to consider next.

Wish I had seen in advance he was riding through.