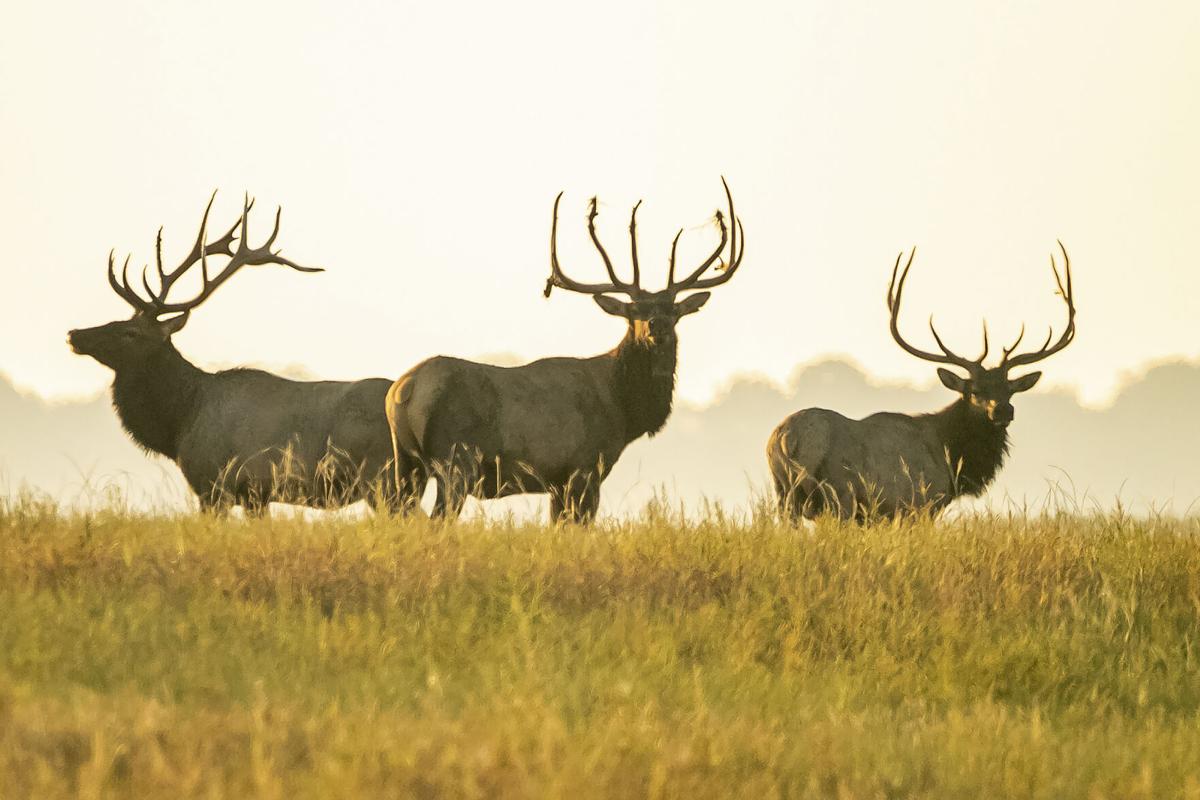 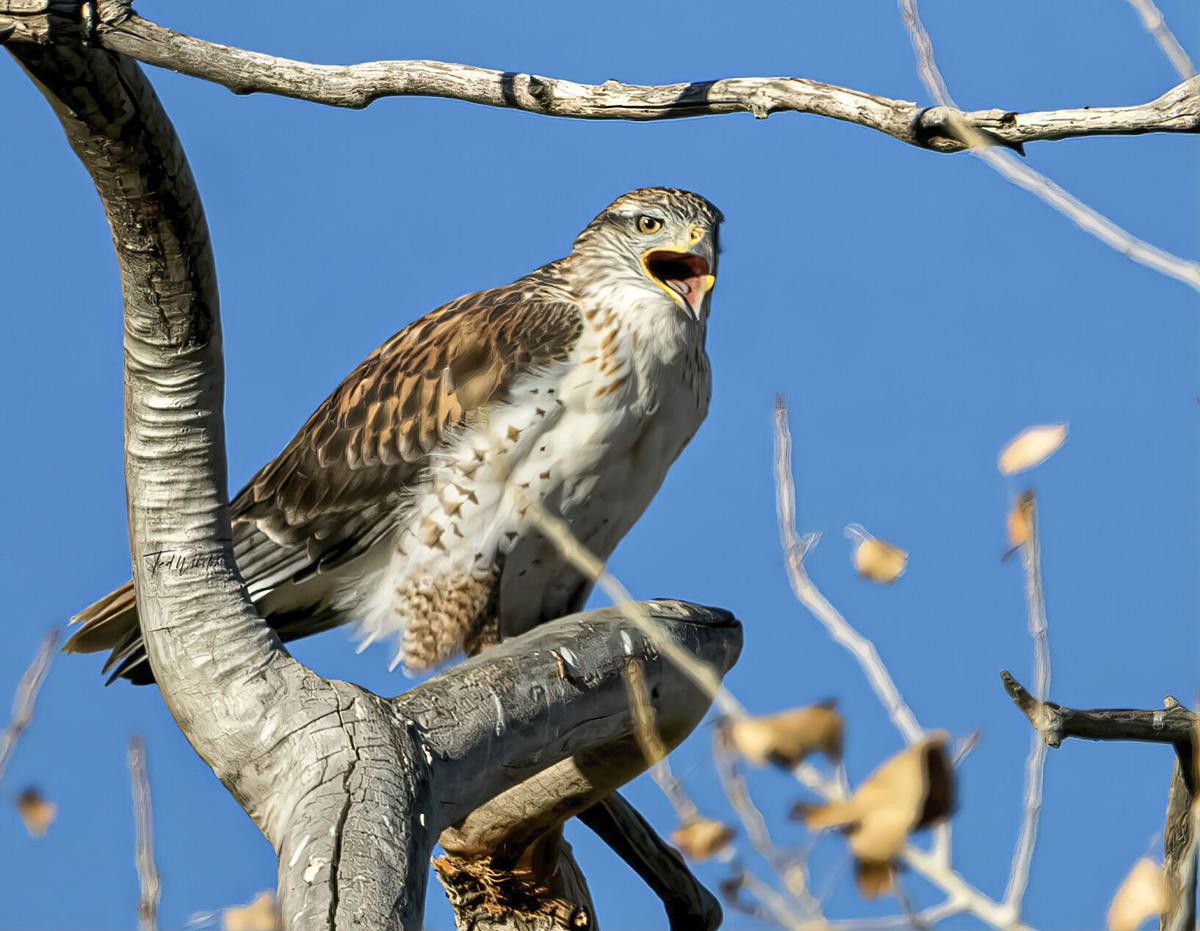 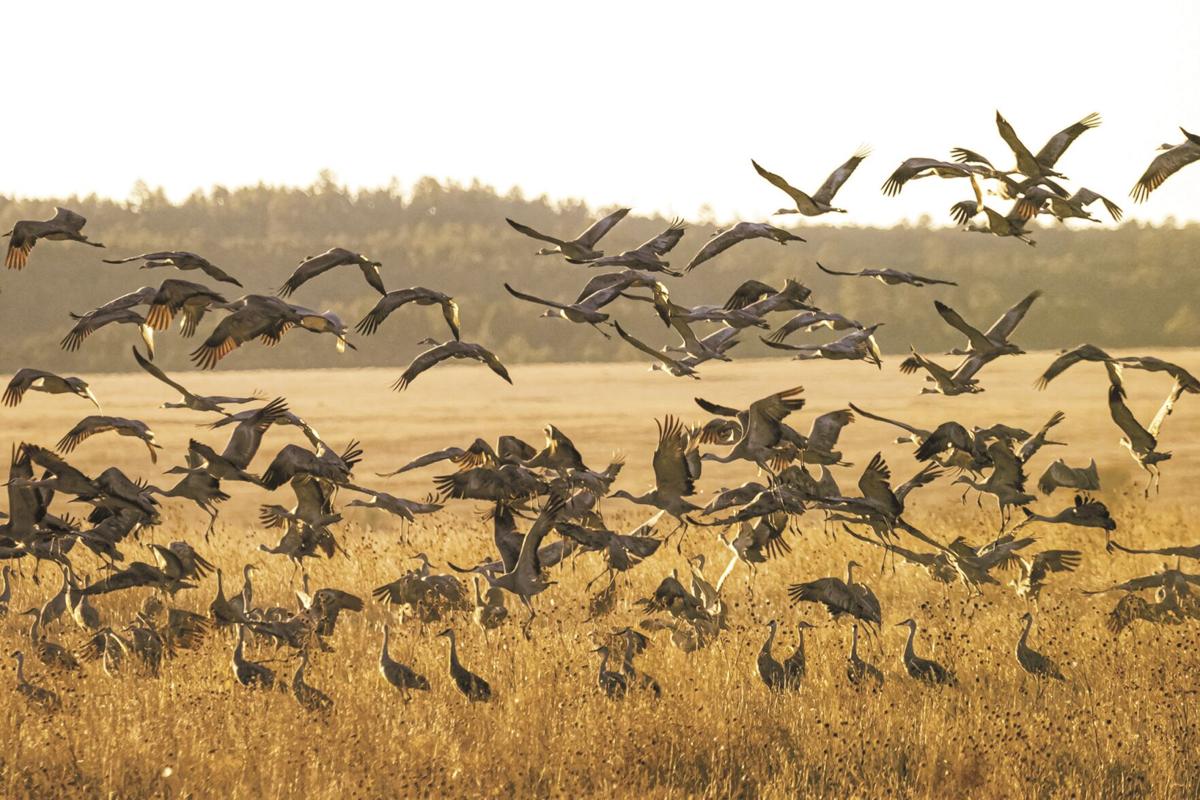 Sandhill cranes take off from a field during golden hour at Las Vegas National Wildlife Refuge. 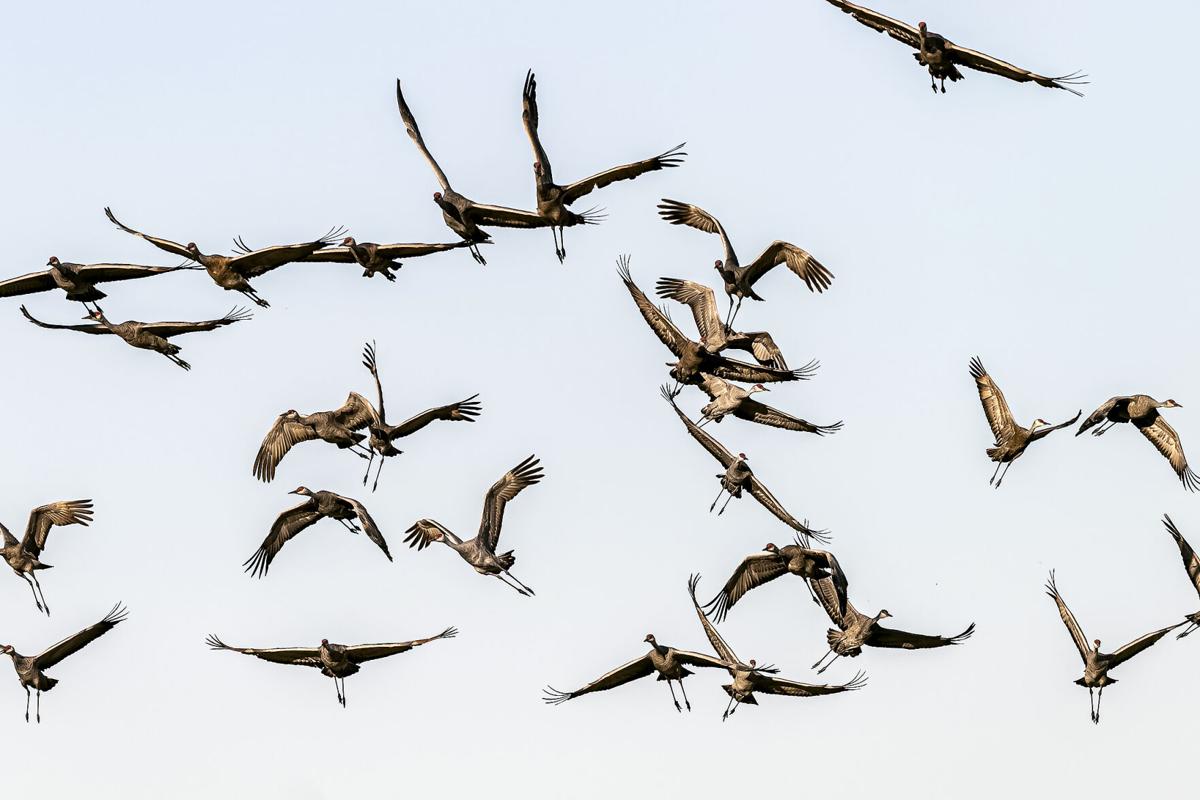 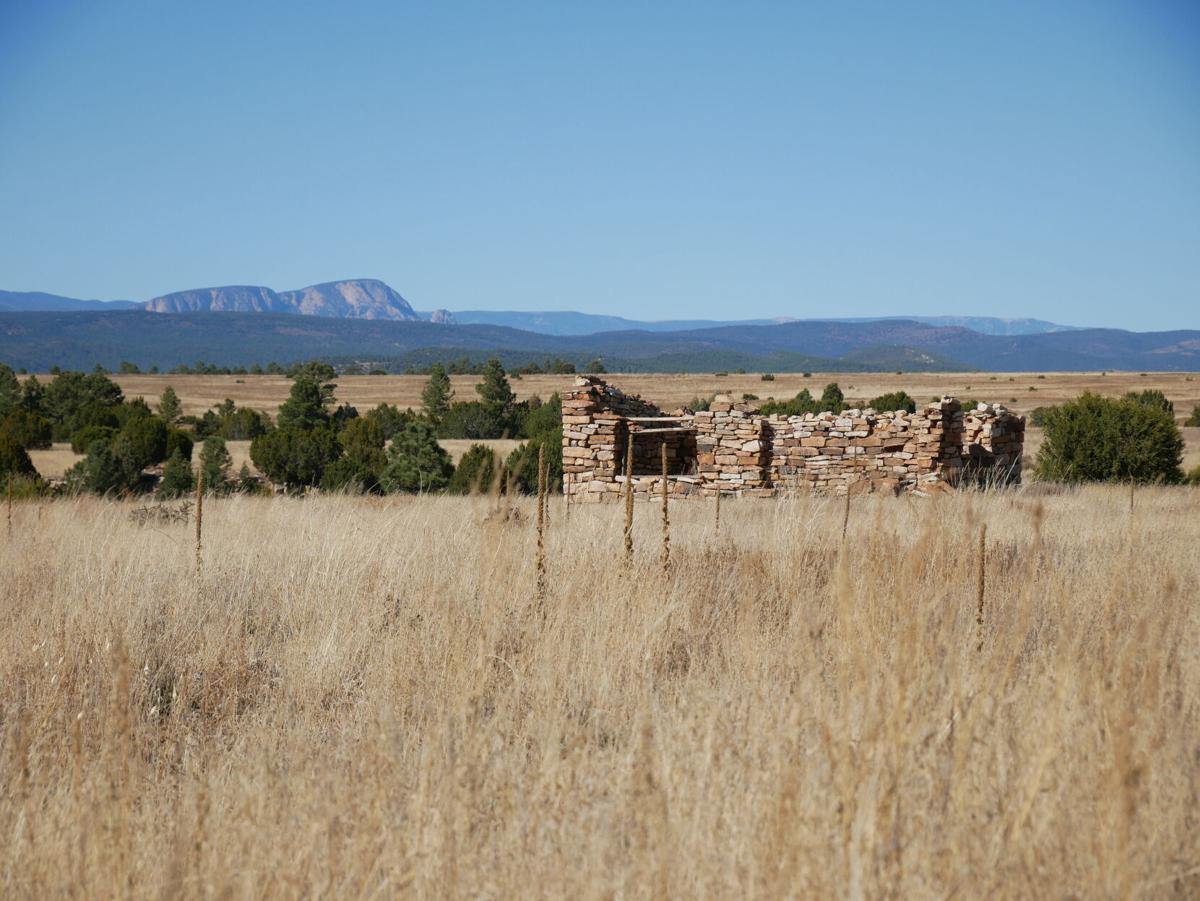 The remnants of a historic structure stand along Gallinas Nature Trail in Las Vegas National Wildlife Refuge, with Hermit Peak rising in the background. 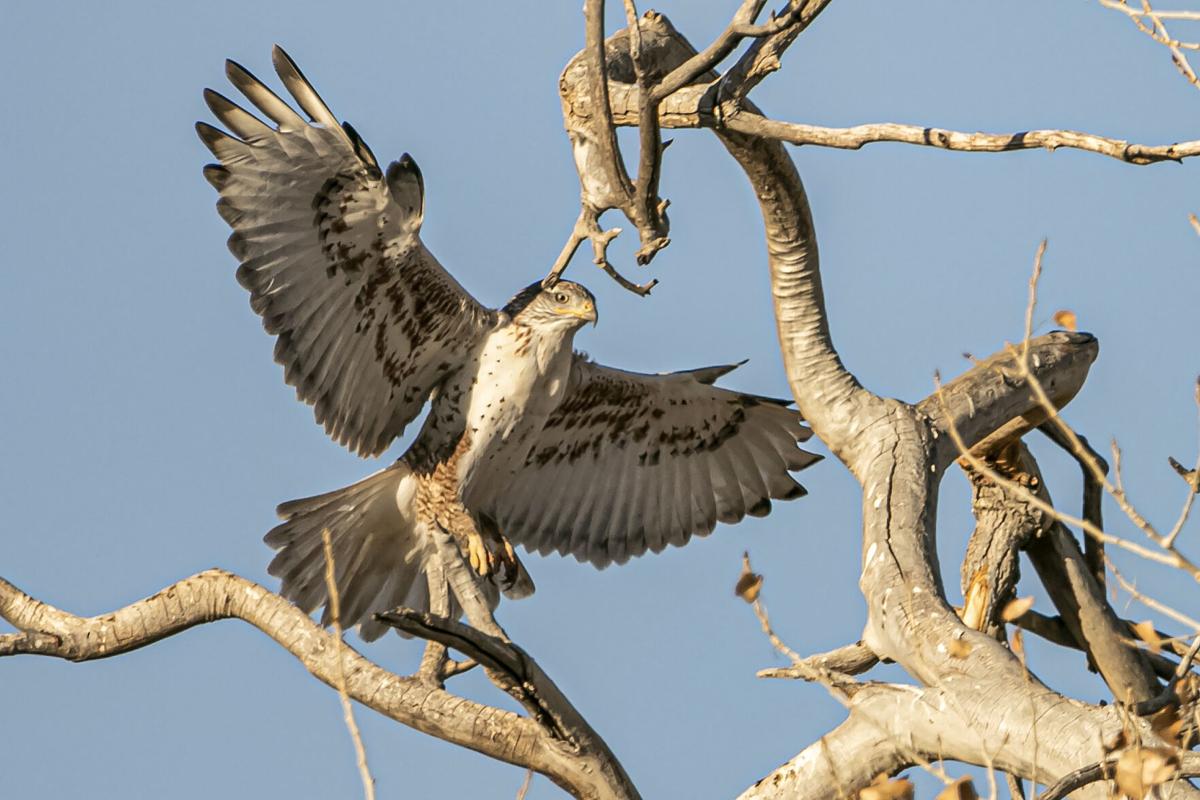 A ferruginous hawk spreads its wings while perching on a tree branch at Las Vegas National Wildlife Refuge.

The remnants of a historic structure stand along Gallinas Nature Trail in Las Vegas National Wildlife Refuge, with Hermit Peak rising in the background.

A ferruginous hawk spreads its wings while perching on a tree branch at Las Vegas National Wildlife Refuge.

It can take years to see what makes a place special, even if it’s in your own backyard.

For Ted Winston, the prairies and wetlands just outside of Las Vegas, N.M., where the Sangre de Cristo Mountains to the west meet the high plains to the east, have gone from an area he says he took for granted as a youth to one he now wakes up before sunrise to visit on many of his days off.

He said he remembers his parents taking his siblings and him to the Las Vegas National Wildlife Refuge around the time it was established as a refuge in 1965. When Winston’s older brother was in high school and had babysitting duties, he would sometimes drive Winston and their sister, Anne, to the refuge, and the younger siblings would wait in the car while the older brother would visit with his girlfriend.

It was a place he was brought to and didn’t think much about. Now, it’s an escape that’s constantly on his mind, especially in the autumn months.

“I see all these birds I was never aware of growing up,” Winston said. “I just didn’t pay attention.

“It’s really amazing to see all this going on, and it’s right outside of town. You know, it’s surprising how many people don’t know where the refuge is who are from Las Vegas, and it’s just five miles away. They grew up in Las Vegas, and they don’t know anything about it.”

Now that Winston knows more about it himself, he wants to spread that knowledge and appreciation for the refuge to others.

He and his sister, Anne Sanders, are both active members of the Friends of the Las Vegas National Wildlife Refuge, a nonprofit organization of more than 100 members dedicated to preserving and enhancing the resources for the 8,672-acre refuge. The Friends also promote conservation and support educational opportunities to help people of all ages learn about local wildlife and habitats.

Fall is an ideal time to visit the refuge for wildlife enthusiasts and photographers. The area is a pit stop for sandhill cranes and other migratory birds as they make their way south to warmer regions for the winter. It’s also the season of the elk rut, when bull elks’ bugling can be heard across the land and herds can sometimes be seen in and around the refuge.

Visitors get special access to view the wildlife each Sunday in November. From 8 a.m. to noon, the Friends group and the refuge host their annual Fall Flight Festival, opening up 4 ½ miles of backroads that are normally closed to the public to allow visitors to check out a handful of ponds and wetland areas they normally would be prohibited from driving near.

The festival was canceled last year due to the coronavirus pandemic, and it as been toned down this year for health precautions. There aren’t the usual expert talks and demonstrations. There are, however, volunteer roaming naturalists available to help visitors identify and learn about the various bird species.

The bird viewing isn’t as spectacular here as it is at Bosque del Apache National Wildlife Refuge near Socorro, where many species spend the winter in massive numbers. Still, there are plenty of opportunities to have memorable encounters.

“On weekends, I’ll get out here around sunrise, especially this time of year when the cranes are out, to see them lift off from the ponds when there are a couple thousand of them sitting on one pond,” said Winston, a land surveyor who has become an avid wildlife photographer.

“We don’t get the number of cranes or snow geese that they get at Bosque del Apache, but you don’t have to fight all the crowds. You can just park along the road down here and watch. It’s an amazing sight to see.”

There are several dozen species of birds that can be found in the refuge in the fall in addition to the cranes.

Bald eagles can sometimes be spotted perching in trees overlooking the wetlands. White-throated, red-eyed Western grebes dive in the ponds searching for food. Canada geese and mallards fly in formation in front of the distant granite cliffs of Hermit Peak to the west. Hawks swoop and circle about with regularity. And gulls and pelicans seem out of place in the high plains on their way to larger bodies of water.

Debbie Pike is a visitor services manager with the U.S. Fish and Wildlife Service who helps with programs and operations within the Northern New Mexico National Wildlife Refuge Complex that includes the Las Vegas, Rio Mora and Maxwell national wildlife refuges. She said the sites, within a 90-mile stretch along Interstate 25, all provide places to feed and roost for the migrating birds.

“All these refuges that are in the flyways have been specifically acquired for feeding these birds during migration,” Pike said. “They’re like these little postage stamps along the different flyways, and we’re in the central flyway.

“The birds go to one refuge, eat for a little while, and when it gets cold, they push farther south to the next one.”

Pike said triticale, a type of fast-growing wheat and rye hybrid, has been grown on more than 400 acres at the Las Vegas refuge to help feed the birds during the travels. Many birds feed in the fields during the day and roost in the wetlands in the early mornings and evenings.

In addition to the bird migration, Winston has been excited to again be able to interact with the humans drawn to the refuge.

For the Fall Flight Festival, he and other Friends members greet those who drive up with snacks, facts and tips as they arrive near the visitors center (which is closed for remodeling).

Some he recognizes as regulars. Others he hopes will have an experience that reveals to them why this place is a local treasure.

“It’s been nice to get back out here now and see people come from all over the state, and some we’ve seen come every year for a long time,” Winston said. “They look forward to doing this. They’re happy.

“People like coming out here and driving around, seeing what’s out there.”

Las Vegas National Wildlife Refuge is located 6 miles southeast of Las Vegas, N.M. The headquarters can be reached from Interstate 25 at exit 345, then east on N.M. 104 for 1.5 miles, then south on N.M. 281 for about 4 miles. The visitors center is currently closed for remodeling. There is no entry fee.

The Fall Flight Festival takes place every Sunday in November from 8 a.m. to noon. During these times, a 4 1/2-mile, self-guided drive on the refuge's backroads is open to the public for the only time all year and volunteer roaming naturalists are stationed to help visitors identify birds.

A pair of short hikes are available at the refuge. Meadowlark Trail is a 1/2-mile loop hike in the area surrounding the visitors center. The Gallinas Nature Trail is a 2-mile hike that passes historic ruins along mixed grass prairie before descending 250 feet into a forested box canyon.

To learn more about the Friends of the Las Vegas National Wildlife Refuge, visit www.flvnwr.org.

According to the website (https://www.fws.gov/nwrs/threecolumn.aspx?id=2147595800), the Fall Flight Festival is CANCELLED

First four Sundays in November' Event has been Cancelled due to an increase in Covid 19 cases.

Hello, Richard. This cancellation was last year and they haven't updated that web page. I went to the refuge on the first Sunday of this month and can confirm that the event is taking place this year.