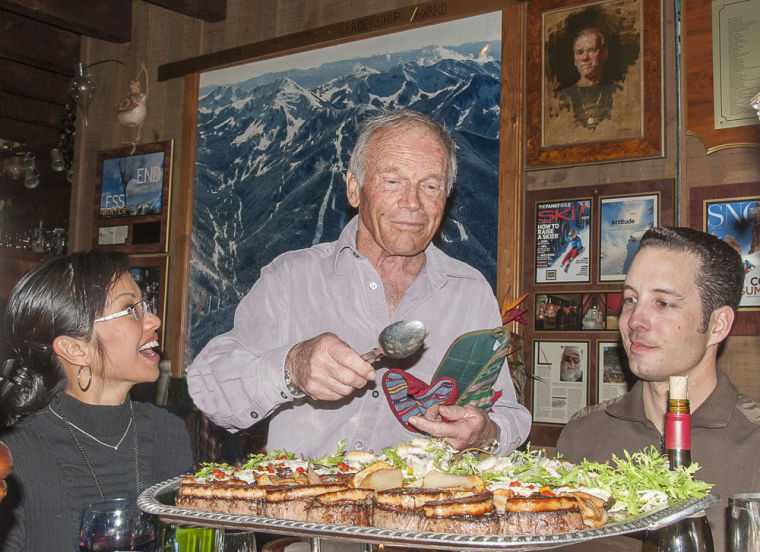 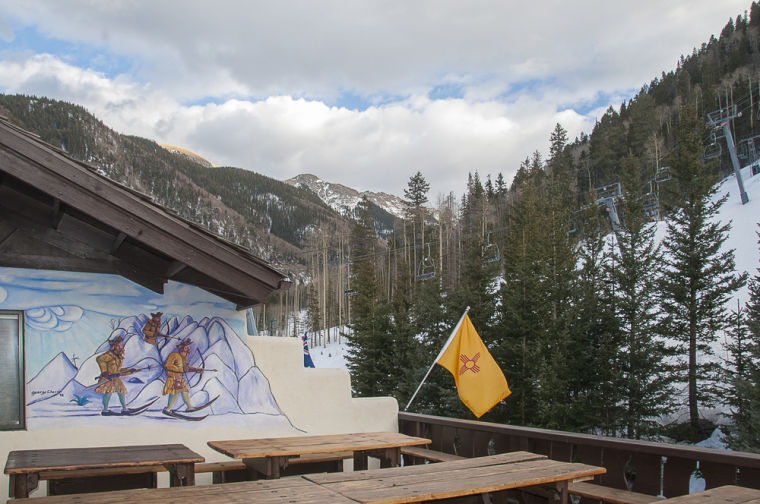 The deck of the Hotel St. Bernard, looking up the Hondo Valley toward Wheeler Peak, is graced with a mural painted by Taoseno George Chacon. Courtesy Kitty Leaken 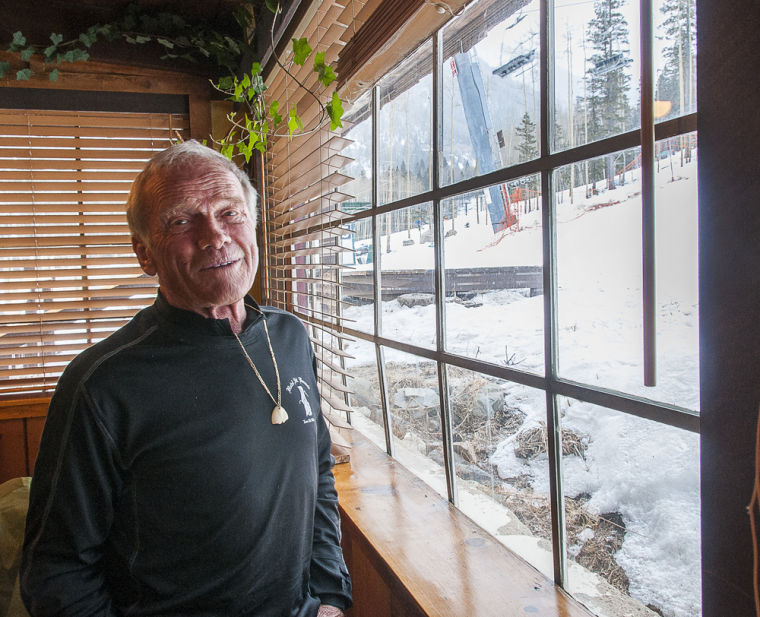 Jean Mayer stands in front of the lodge windows, where Ernie Blake’s run away ski once came crashing through. Courtesy Kitty Leaken

The deck of the Hotel St. Bernard, looking up the Hondo Valley toward Wheeler Peak, is graced with a mural painted by Taoseno George Chacon. Courtesy Kitty Leaken

Jean Mayer stands in front of the lodge windows, where Ernie Blake’s run away ski once came crashing through. Courtesy Kitty Leaken

In a world where the past is wiped away faster than you can swipe a screen, there’s a lot to be said for things that stay the same.

This is the guiding philosophy behind the extraordinary Hotel St. Bernard, tucked away high in the Sangre de Cristo Mountains at Taos Ski Valley. Its copper-covered fireplace is the eternal flame of this special valley, where generations of popsicle-like children have thawed out of a winter day and hotel guests can be found gazing contemplatively, hot chocolate in hand, into the orange flames.

Since its opening in 1960, under French-born Jean Mayer, the hotel has served as the unofficial living, dining and bar room of this unique alpine community, inspiring clientele to return annually for more than 40 years, and its staff to show up decade after decade.

Evan Blish, bartender and sommelier at the “St. B” for 39 years, said, “One of Jean’s most famous sayings, and he has many, is ‘The more things change, the more we stay the same.’ ”

It began as a place of basic amenities, and it remains so today. The 10 rooms in the main lodge are small, with tiny bathtubs and thin walls. There is no spa (but there is a hot tub), no game room, no room service, no retail shops. But the gourmet food, old-world charm, live music in the Rathskeller and warm staff more than compensate.

Last week, found the hotel bustling with a nearly full house — mostly people there for its famed “Ski Week” — which includes two daily ski lessons, all meals and lift tickets. People are seated at the same table for dinner nightly, and many a friendship has been struck here over the years. Among the guests were Bruce Lonie of Northern California, his wife and friends.

“Near as we can figure, we’ve been coming since 1971 or 72,” Lonie said. “We’ve only missed a few years. It’s kind of like coming home. You know, I’ve known some of the staff for 40 years. We can’t imagine not coming here every winter.”

Alison Salzman of Chicago first came to Taos in 1966, riding the train to Raton, where they were met by a driver who took them into this hidden valley.

“It was great” she recalled. “There was one beginner poma and a poma up Al’s, which I couldn’t ride — it would lift me into the air. Later, when the backside was first opened, I remember skiing the miles-long Rubezahl back to the base, past a frozen waterfall and across a beaver pond.”

For Mayer, it is like a dream come true.

“I never thought we’d be here so long,” he recalled recently while sitting in a quiet corner against windows half buried in snow. “It was never about the business. We were so busy creating the situation, creating the ski area with Ernie Blake [the Swiss-born founder of Taos Ski Valley]. It was much more the lifestyle.”

Born in Paris, Mayer grew up in the French Alps, living in Chamonix, among other locales.

“I would go to school on skis. It was more a way of life than a recreational sport,” Mayer said. “Then it was wartime, and we moved around a lot because my dad was in the French Underground.”

When the war ended, Mayer skied for the French junior national team; became director of the ski patrol at Garmisch, Germany; and worked with the U.S. 10th Mountain Division as a trainer and coach. During the 1956 Hungarian uprising, he led revolutionaries out of Hungary.

He was proposed for a medal of honor, but instead, he asked to be allowed to settle in the United States. He had gotten to know the head of the U.S. Ski Patrol, Bill Judd (now a member of the Colorado Ski Hall of Fame), and he recommended Mayer to Ernie Blake.

Also putting in a good word for Mayer was Pete Seibert, another 10th Mountain Division veteran who was soon to launch his own area in Colorado — Vail. With the training he received in cooking and hospitality at l’Ecole Hoteliere in Nice, and a stint at the Hotel Pierre in New York City when he first arrived in this country, Mayer arrived in Taos in 1957 to serve as the director of fledgling Taos Ski Valley’s ski school and its only overnight accommodation, the Hondo Lodge.

“I worked at the Hondo, but right away, I started building this, little by little,” Mayer said. “We began with the room where the fireplace is — very small. I lived in a trailer. It was rough. It was tough. We had running water in a hose and it would freeze, so we’d make fires to thaw it out.”

Mayer attributes much of the St. B.’s success of the to Chilton Anderson, who put up the initial funds for the hotel and secured the hotel’s hosting of the annual summer Taos School of Music.

“I have a great allegiance to the family for helping me get started,” he said.

Family is a big word around the St. Bernard: The extended family of staff, the family friendships forged here, and the Mayer family roots. This winter, two of Mayer’s eight children were working at the hotel (a third, Monique Jacobson, is the New Mexico secretary of tourism). Kailani Mayer, just out of art college, is spending her first full season on staff.

“The hotel is not-so by the book,” Kailani Mayer said. “We don’t just feel like we are the servers or the cooks. We get to know our customers and each other year after year, and you build relationships. It’s more of an exchange. It’s not that we are trying to maintain ‘old school’ style, but rather authenticity and integrity.”

Bartender Evan Blish, who has worked alongside fellow bartender Mike Kierst and waitress Andrea Heckman for 35 years or more, said, “It’s all can be attributed to Jean, really. He is larger than life and such a special person.”

Blish said that most staff have separate lives, jobs and businesses. He, for instance, was the top-ranked MLS real estate agent in Taos in 2013.

“I don’t have to be doing this,” Blish said. “But we love being a part of what he has created here, his graciousness and magnanimous character.”

The St. B, Blish noted, is where he met his wife, a fellow employee, and his children grew up running around the hotel.

The open-air deck of the hotel is the best spot in New Mexico for après-skis on a warm afternoon. For 32 years, this has been the realm of deck manager Greg Jaramillo, who began started work as a dishwasher.

“People who work here generally don’t leave,” he said. “Jean treats his employees well — he even buys all staff a season pass — and we all pull together to make it happen.”

The list of age-old employees goes on — from the chef of 30-plus years Claude Gohard (now retired) and St. Bernard Condos manager Kathy Humphries, a veteran of 31 years, to the third generation of women cleaning the rooms.

It is after dinner — a delicious meal served personally by Mayer with his typical flair and style. We are sated on a light soup, grass-fed, organic filet mignon topped with a shallot butter sauce and dab of fried goose pate, Portobello mushrooms stuffed with goat cheese, a smoked trout salad, a fricassee of potatoes and desert.

Mayer is tired. Soon, he will make the drivedown-valley to Arroyo Seco, where he now lives after spending 21 years residing at the ski area. Still the technical director of the ski school, he will serve breakfast the following day, then lead the hardest-charging skiers in the ski school out for a morning lesson. After serving lunch, he’ll catching a nap before dinner; then do it all again the next day. Where does he find the energy?

He looks to the slopes above the hotel glinting in the moonlight.

“We still have a family working here at the St. Bernard and throughout the valley — it is not just an individual or two,” he said. “And our guests will continue to come back because of the magic of Taos Ski Valley. The magic is really in the mountain. It is stronger than anyone. You either bow down to the mountain and flex with it, or you move away. I trust in the mountain to provide what we need.”

Where: The ski-in, ski-out Hotel St. Bernard at Taos Ski Valley is located about 2 1/2 hours from Santa Fe. It was historically available only for weeklong stays, but now accepts short-term clientele and, if you’re lucky, dinner-only reservations.

Cost: A ski week runs $2,624 per person for a double. There are 29 units altogether: 10 in the lodge, plus rooms in A-frame chaletsnext door and the walk-to contemporary St. Bernard Condominiums. The dining area has a maximum capacity for 130 or so. For those that can’t make the trip, there is a wonderful new book about the hotel titled Cuisine St. Bernard: Recipes and Reflections from the Incomparable Mountain Inn (Arundel Press, London).