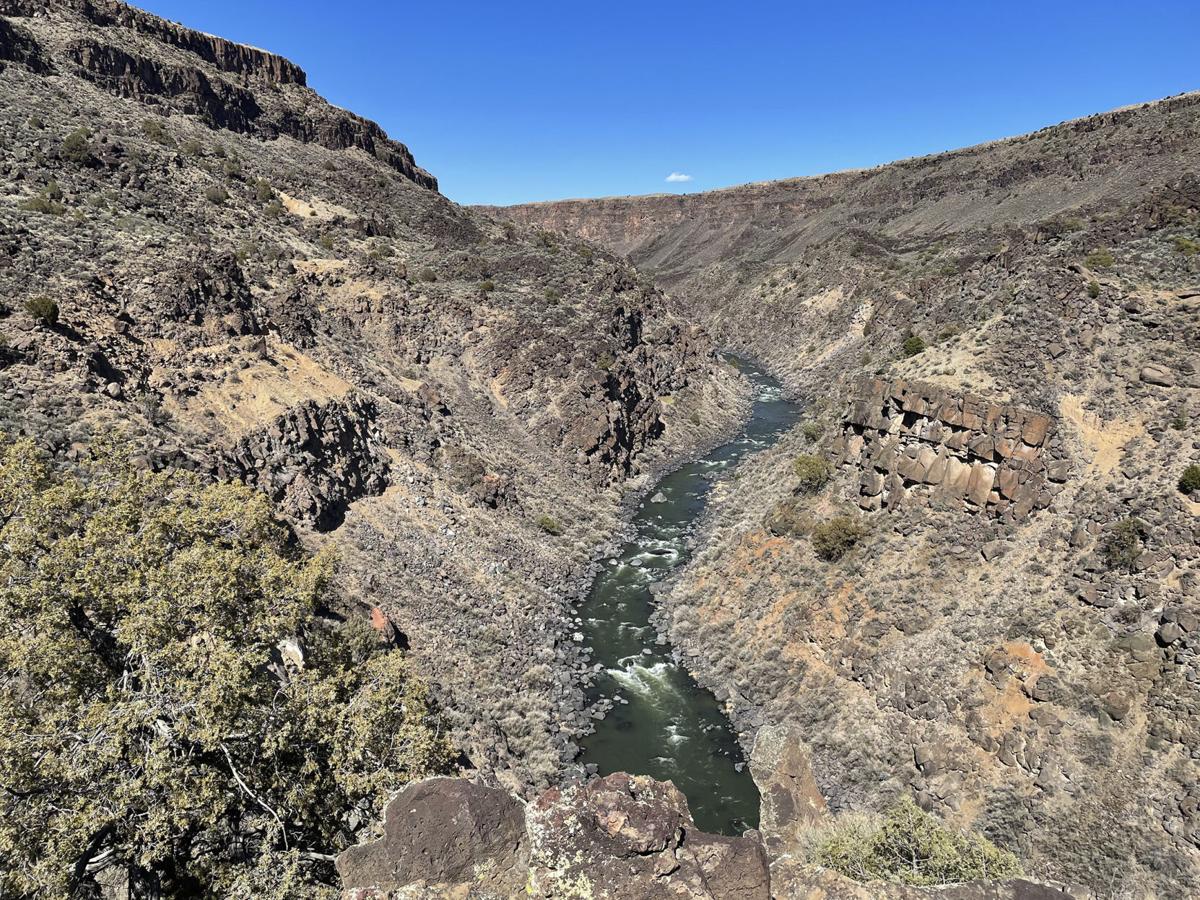 The Rio Grande Gorge as seen from an overlook at the end of La Vista Verde Trail in Rio Grande del Norte National Monument north of Pilar. 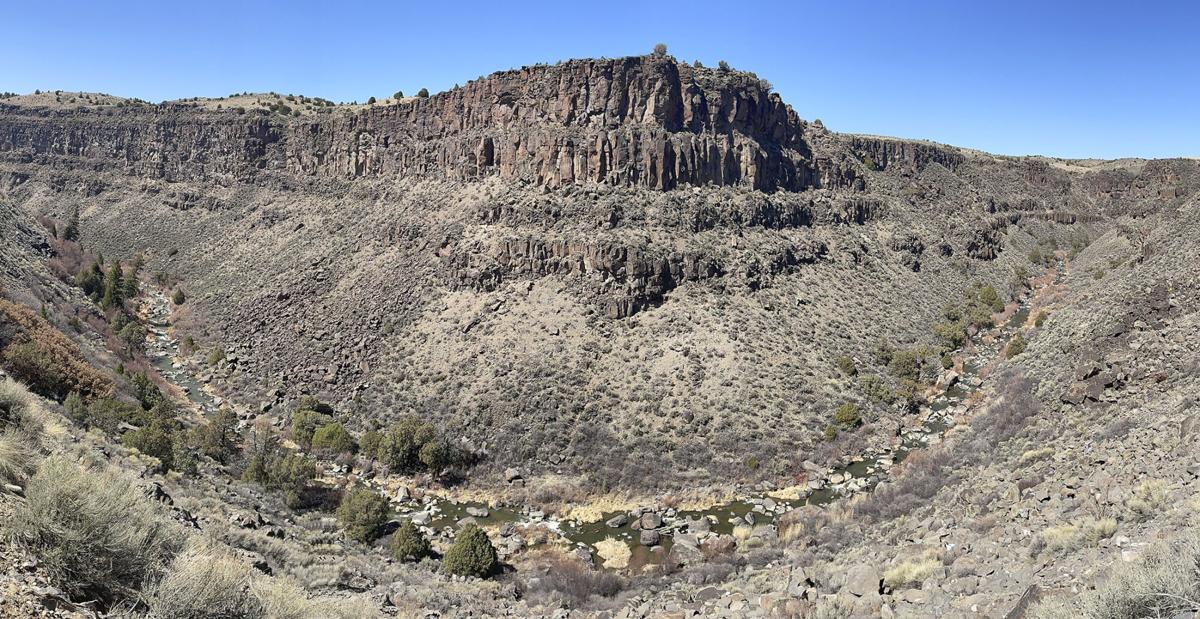 A panoramic photo of a bend in Rio Pueblo canyon before the river’s confluence with the Rio Grande, as seen from The Slide Trail north of Pilar in Rio Grande del Norte National Monument. 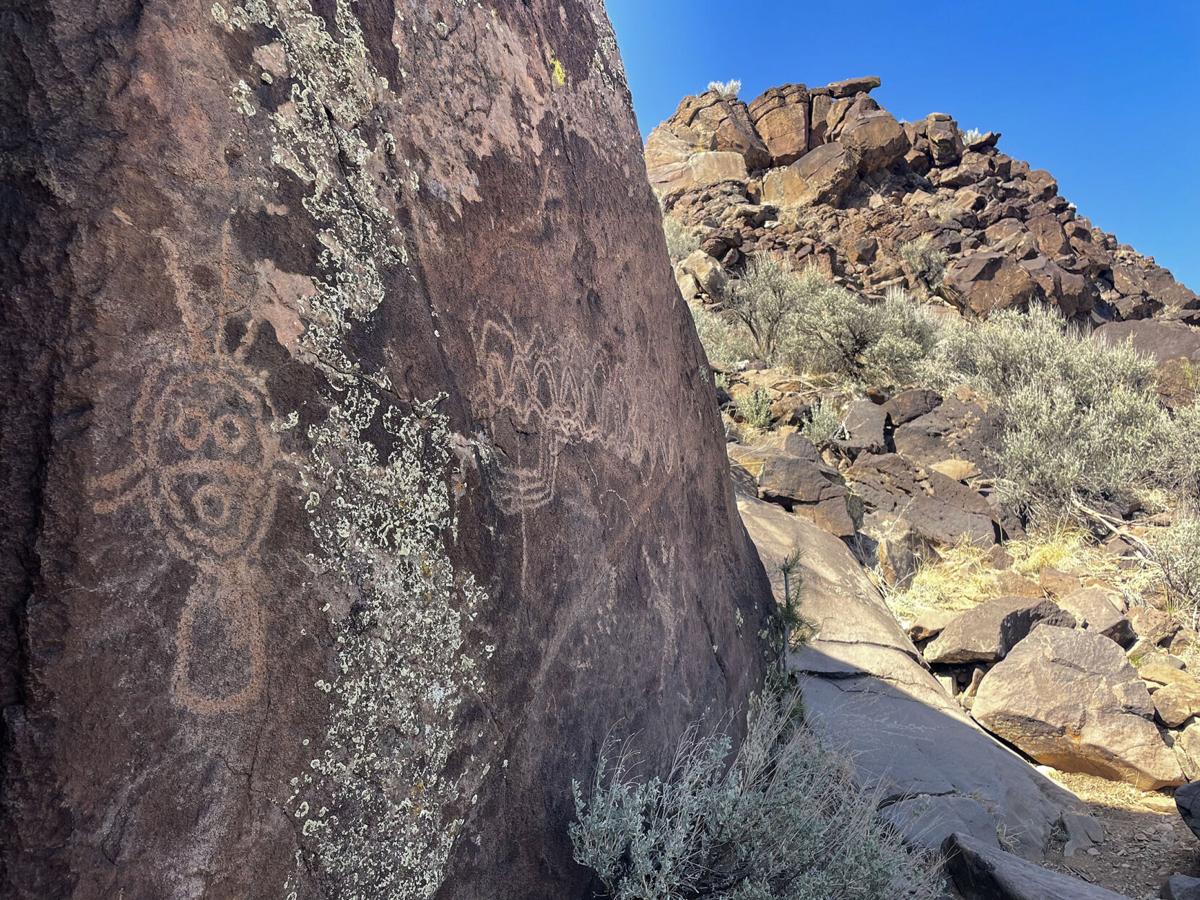 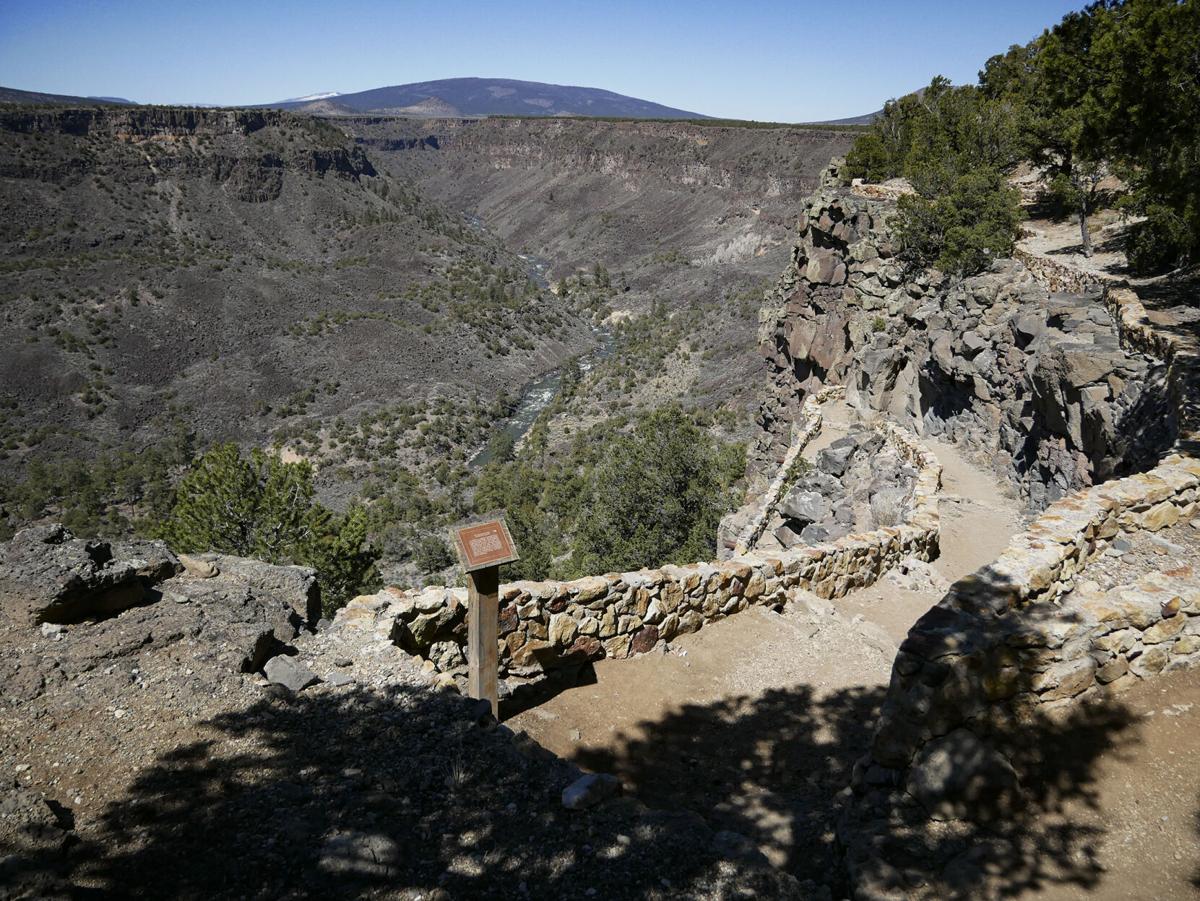 The start of Big Arsenic Springs Trail as it descends switchbacks down to the Rio Grande at Wild Rivers Recreation Area west of Questa. 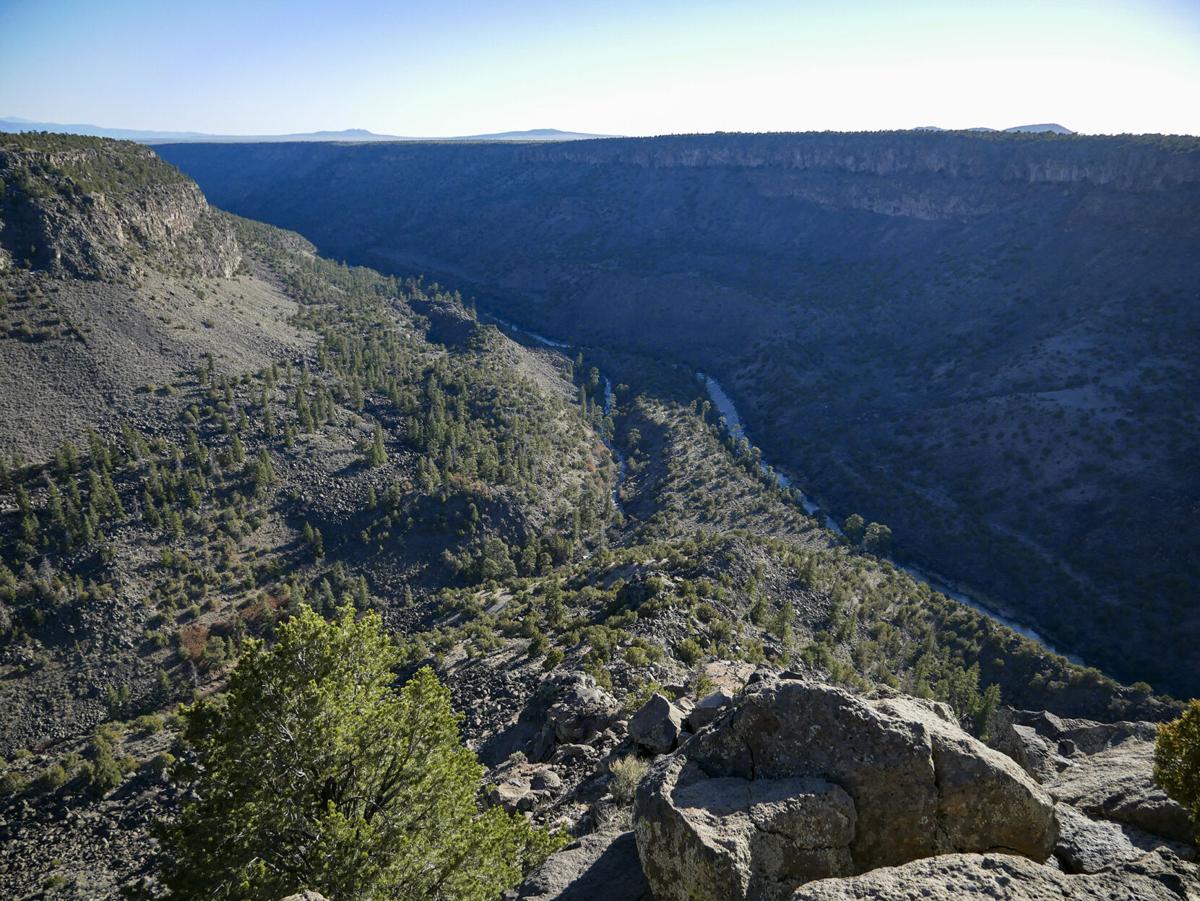 The confluence of the Rio Grande, right, and Red River as seen from La Junta Point Overlook at Wild Rivers Recreation Area west of Questa. 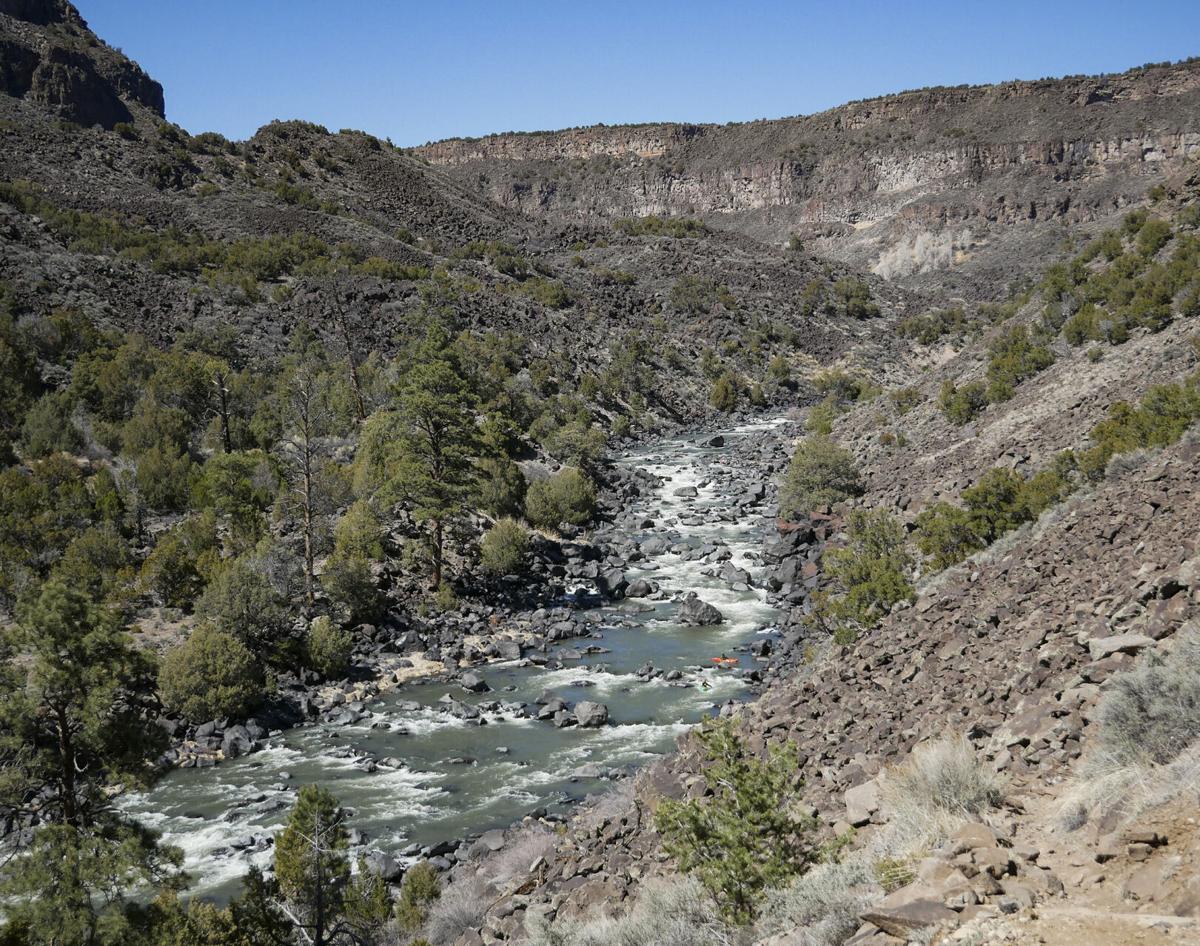 The Rio Grande Gorge as seen from an overlook at the end of La Vista Verde Trail in Rio Grande del Norte National Monument north of Pilar.

The confluence of the Rio Grande, right, and Red River as seen from La Junta Point Overlook at Wild Rivers Recreation Area west of Questa.

The profound astonishment that accompanied my initial encounter with the Rio Grande Gorge has yet to diminish on subsequent viewings of the gaping crevice that slices 800 feet deep into the Taos Plateau.

Though now on drives I know when to expect to see the dramatic seam that tears north to south through the flat valley, it always comes as a shock to witness the earth fall away so abruptly.

From the rim, particularly near the Rio Grande Gorge Bridge west of Taos, the canyon can seem like an imposing and treacherous landscape better to be seen from a safe overlook than explored in depth.

But it would be a mistake to think of this signature feature of Northern New Mexico’s high desert as just a place to take in a stunning view.

There are multiple days worth of incredible hikes zigzagging up and down steep slopes, following scrub-covered shelves and snaking along the great river of the Southwest.

With limited areas to find relief from the sun, spring is a prime time to wander the gorge before the heat of summer takes hold.

Spanning about 50 miles from the Colorado border to its southern tip near Pilar, Rio Grande del Norte National Monument offers jaw-dropping trails for hikers of all skill levels.

The 242,555-acre monument, established by presidential proclamation in 2013 and administered by the Bureau of Land Management, is accessible from two main sections.

A visit to either can easily fill a day, with the opportunity to string together multiple short hikes.

Wild Rivers Recreation Area, which requires a $3 day-use fee to access its most popular trails, offers a handful of routes from the rim to the river.

Big Arsenic Springs Trail is one of the best hikes in the gorge. The 1-mile trek down well-maintained switchbacks leads to a cold water spring and connects with the River Trail that follows along the Rio Grande as it carves through the canyon while rolling over rapids.

Upon descending below the rim of the great chasm, the robust winds frequently experienced atop the canyon briefly abate, sweeping views remain, and hikers become immersed in the grandeur of the gorge.

There’s a surprising amount of vegetation along this trail, with piñon, juniper, Douglas fir and beautiful ponderosa pines providing a wonderful aroma of the forest. Interpretive signs along the steep walk share information about the plant life, geology and volcanic history of the gorge, which is lined with black basalt from hardened lava flows.

Near the bottom, a trail continues upriver toward a pair of cool springs and an area that contains Native American petroglyphs. Ancestors of the Utes, the Jicarilla Apache and the people of Taos Pueblo were among those who carved petroglyphs on the smooth rock surfaces.

Downriver, the trail extends about 2.5 miles to the confluence of the Rio Grande and the Red River. Little Arsenic Trail gives hikers another rim to river option that’s slightly steeper and more exposed.

Both Big Arsenic and Little Arsenic trails are rated as difficult in the BLM’s Rio Grande del Norte trail guide, and climbing hundreds of feet to return to the rim can be a challenge at the end of a day of hiking under the sun.

A must-see site at the Wild Rivers Recreation Area is La Junta Point, which is a short, paved walk on the rim. Perched above where the Rio Grande and Red River converge, the wheelchair accessible viewpoint offers one of the best vistas of the gorge.

La Junta Trail, which heads down to the confluence from the overlook, has been closed since 2018 to address safety concerns.

Farther south and closer to Taos, the Orilla Verde Recreation Area contains many hiking options along the canyons of the Rio Grande and Rio Pueblo, most of which are easy to moderate.

The Slide Trail, or Old 570, is an easy 2.6-mile out-and-back that gradually climbs from the Rio Pueblo to its canyon rim along an old, unpaved stretch of road that was closed to vehicle traffic in the early 1990s after a rock slide.

The trail that hugs along the bend of the canyon and has a constant view of the Rio Pueblo is a great option for those who want to enjoy a river to rim hike without the steep switchbacks.

The Slide Trail can be accessed from the top at the end of County Road 110 off N.M. 68, or from the bottom near the Taos Junction Bridge on N.M. 570 north of Pilar.

About a half-mile above the Taos Junction Bridge, where N.M. 570 turns into N.M. 567 on the way up to the Rio Grande Gorge’s west rim, is the trailhead for the short and sweet La Vista Verde Trail.

The 2.5-mile out-and-back follows a sagebrush-covered shelf between the rim and the river and leads to a magnificent overlook of the Rio Grande winding through the canyon to the north.

I spent a good half hour at the overlook scanning the rocky cliffs for bighorn sheep, watching a hawk glide gracefully through the gorge, and spotting a river otter slinking along the shoreline before dipping into the water.

Keep an eye out for paths that stray from the main trail, as some lead to impressive petroglyphs.

There are also longer, relatively flat trails above the canyons, including West Rim Trail that runs nine miles along the rim south of the High Bridge, and the Taos Valley Overlook Trails just off N.M. 68 that contains a system of about 16 miles of single track for hikers and mountain bikers.

I visited Rio Grande del Norte on back-to-back weekends in late March, hiking two or three trails each day. The variance in the hikes made each one feel unique, and the gorge served up surprises I never would have imagined just by gazing down from the rim.