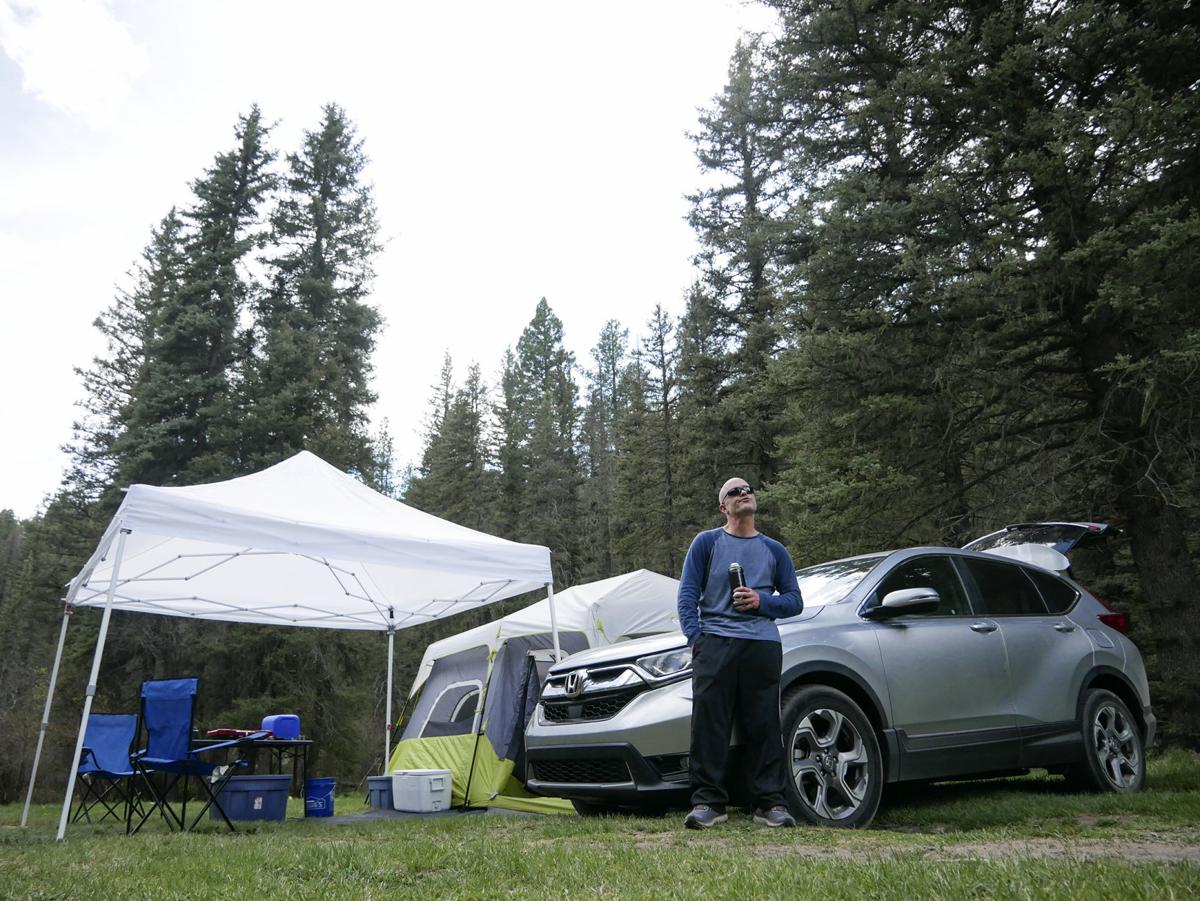 ABOVE: Grant Wingert of Albuquerque stands at the dispersed campsite he secured Friday along N.M. 126 in the Jemez Mountains for the weekend. Wingert said he’s been coming to the Jemez for 35 years and has been saddened to see the amount of trash left by campers increase over time. 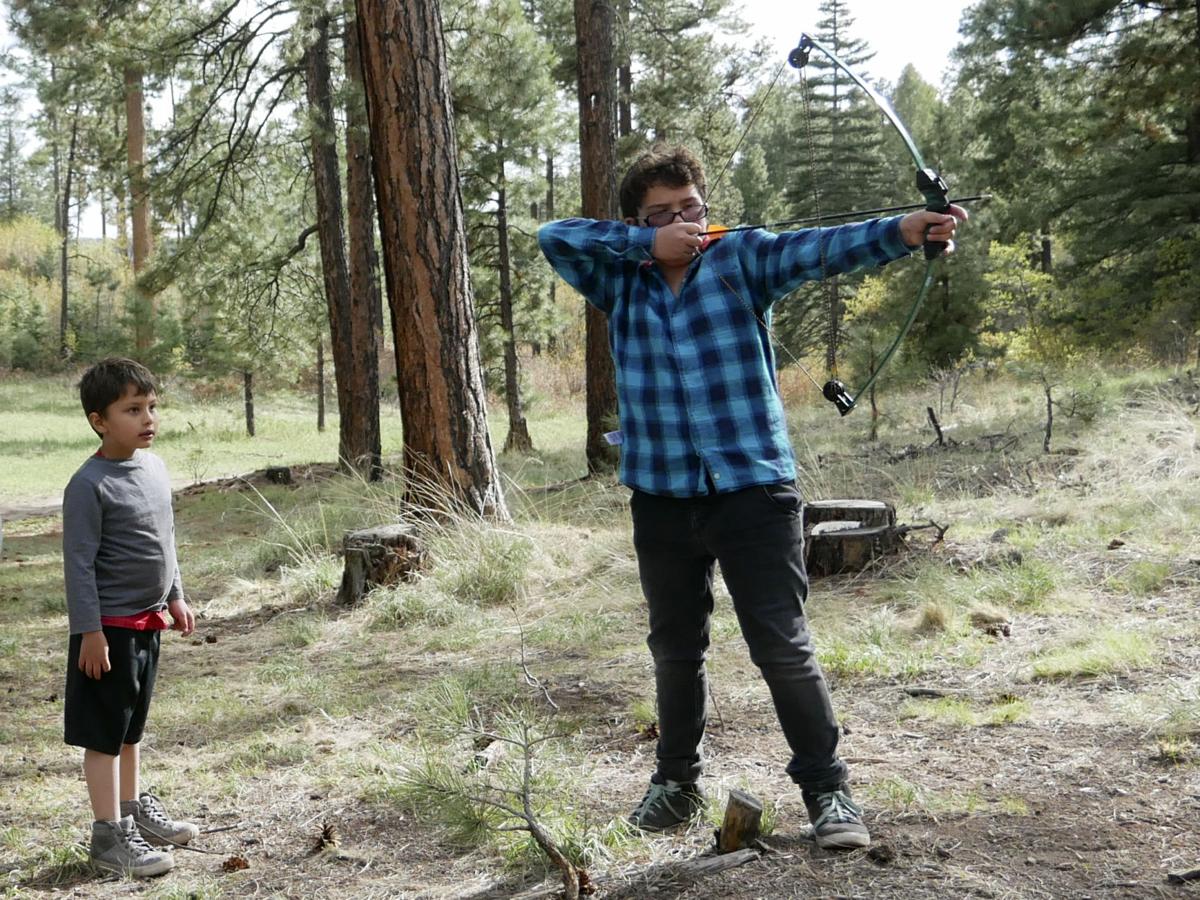 Aiden Salazar, 10, right, aims an arrow at a target Friday as his brother Wyatt, 6, watches at their dispersed campsite in the Jemez Mountains. Their mother, Keola Salazar, said her children had spent a lot of time indoors due to the COVID-19 pandemic and she and her husband, Keith Salazar, wanted to bring them to the mountains to ‘let them be kids again.’ 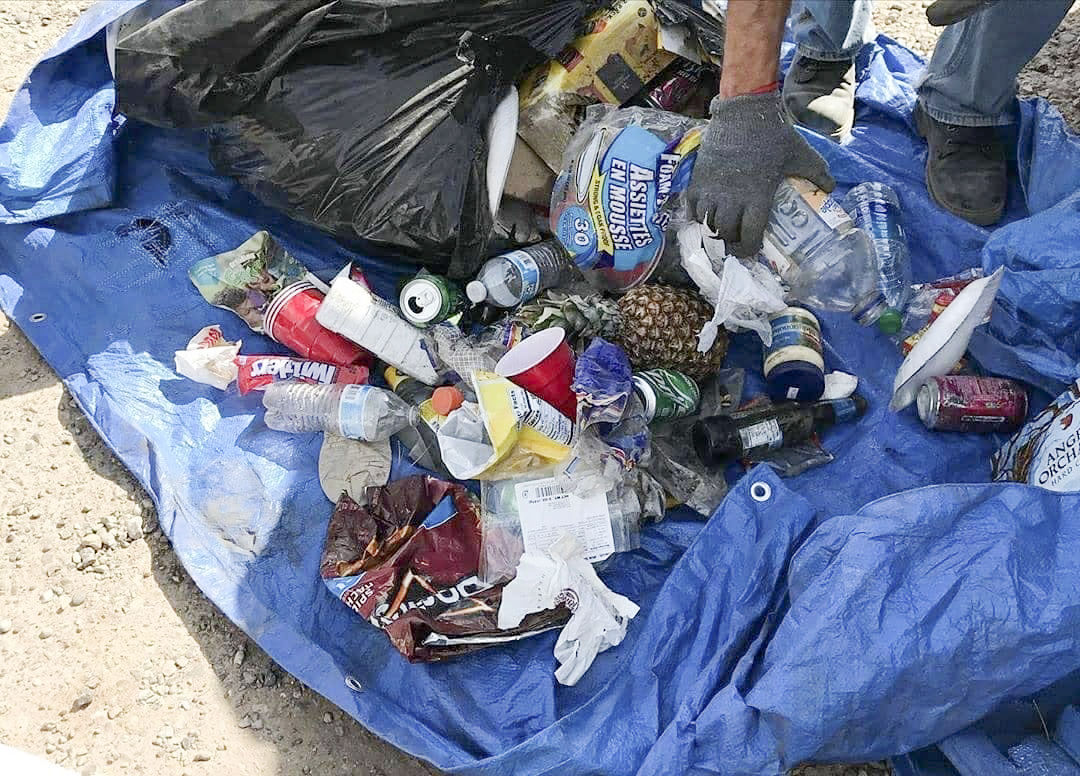 INSET: A pile of trash from a dispersed campsite is collected in a tarp in the Jemez Mountains. Volunteers have helped Forest Service workers in cleanup efforts following weekends that have seen large amounts of trash left behind by campers.

ABOVE: Grant Wingert of Albuquerque stands at the dispersed campsite he secured Friday along N.M. 126 in the Jemez Mountains for the weekend. Wingert said he’s been coming to the Jemez for 35 years and has been saddened to see the amount of trash left by campers increase over time.

Aiden Salazar, 10, right, aims an arrow at a target Friday as his brother Wyatt, 6, watches at their dispersed campsite in the Jemez Mountains. Their mother, Keola Salazar, said her children had spent a lot of time indoors due to the COVID-19 pandemic and she and her husband, Keith Salazar, wanted to bring them to the mountains to ‘let them be kids again.’

INSET: A pile of trash from a dispersed campsite is collected in a tarp in the Jemez Mountains. Volunteers have helped Forest Service workers in cleanup efforts following weekends that have seen large amounts of trash left behind by campers.

Developed campgrounds across Northern New Mexico will remain closed during one of the busiest camping weekends of the year, but campers are expected to be out in force anyway.

They already have been.

Cramming into nooks and crannies all along U.S. Forest Service roads throughout Santa Fe National Forest, recreationists haven’t allowed the COVID-19 pandemic to keep them from enjoying their days and nights out in nature.

Forest Service officials say they have seen a significant increase in the usage of dispersed, or undeveloped, campsites this spring compared to what they would typically see this time of year.

“It’s probably on par for what we’d get for a big holiday weekend like Memorial Day weekend, but now it’s every weekend,” said Leah Hurley, recreation staff officer for the Jemez and Cuba Ranger Districts.

So then what will Memorial Day weekend look like?

That’s a cause for concern for Forest Service employees whose resources are already stretched thin as they deal with the impact of the surge in dispersed campers, particularly in Pecos Canyon and the Jemez Mountains.

The combination of careless campers and a high fire danger in Northern New Mexico’s forests have officials wary of what’s to come this weekend and throughout the summer. They implore visitors to adhere to the ban on campfires, to follow the state’s public health orders and practice Leave No Trace principles while enjoying their time outside.

The threat of a fire is the most pressing concern for Luke McLarty, fire battalion chief of the Jemez Ranger District.

McLarty said his district’s energy release component figures, which correlate with the amount of energy that can be released at the flaming front of a fire, are consistent with levels seen with the Dome Fire of 1996. That blaze, started by an improperly extinguished campfire, burned 16,500 acres of forest in the Jemez Mountains, and its scars are still striking to see today.

“People disregarding fire safety is nothing new. That’s been a recurring issue that costs the U.S. taxpayers millions of dollars every year,” McLarty said. “This year, looking at usage to this point and where we normally are, it’s much higher.

“It remains to be seen what will come of this, but there’s the potential it could be worse than it’s ever been.”

With more people seeking dispersed sites since the ordered closure of campgrounds in late March, campers have been venturing deeper along Forest Service roads than in years past. McLarty said these undeveloped sites have a higher accumulation of pine straw and other fuels built up, creating an even higher risk of fire.

During the May 8-10 weekend, McLarty said he and his team found 38 improperly extinguished campfires. Six got to the point where they were moving outside the campfire area or just about to jump outside it when they were found and put out by fire crews, McLarty said.

In addition to leaving smoldering campfires, campers have also left piles of trash.

Because of COVID-19, garbage collection has been suspended and all toilet facilities in the forest have been locked. Many campers have ignored the Leave No Trace principles, strewing refuse around their campsites and leaving piles of trash at day-use areas that have remained open, despite ever-present signs that ask people to pack out their garbage.

“I’ve never seen this much human waste and trash being left out in the forest,” Hurley said. “It’s such a health risk for everyone around, the recreationists and our staff.”

Volunteers have chipped in to help Hurley’s small staff pick up garbage, but they can’t keep up and it’s been accumulating in areas they haven’t had time to reach.

Some campers are doing their part, however.

Grant Wingert felt lucky to find a spot along N.M. 126 on Friday afternoon as dispersed sites were filling up fast. The Albuquerque resident has been making the trip to the Jemez to camp since he was a young child, and he said the trash issue has gotten progressively worse over time. Each trip he makes he said he usually takes two to three bags of other people’s garbage with him to throw away when he gets home.

“I’ve been coming up here for 35 years and so I have a sense of ownership for the Jemez,” Wingert said. “I wish other people did, too, because I’d like for my kids to be able to come up here one day and enjoy this place.”

The state’s social-distancing order limiting groups to five or fewer people is another rule to fall by the wayside.

Forest Service employees can’t enforce the social-distancing orders, only advise groups on what the guidelines are. To aid in the effort, Hurley said Sandoval County law enforcement officials, who do have authority to enforce the emergency orders, have been making rounds through the forests.

While forest officials have been frustrated with the carelessness of some campers, they say they want the forests to remain open and understand the need for people to get outside and unwind during these challenging times.

Last week, Keola Salazar and her husband, Keith, brought their three young children up to the Jemez Mountains from Albuquerque for their first camping trip of the season. She said her children don’t have many opportunities to get outside amid the pandemic and she wanted to take them into the mountains to “let them be kids again.”

“It was amazing,” Salazar said of a Thursday night spent at their dispersed site in a valley. “The stars were really bright outside and the air was fresh and it was just like, I think we could feel ourselves relax.”

Sounds like a call to please reopen camping sites and national parks. Nature is such an important resource and solace for many during hard times. I hope we reopen to keep our planet clean, our sanity in tact, and campfires in proper manicured fire pits--not to mention relieve the stress of these park service workers. We have created a problem that does not need ro continue or worsen. These emergency guidelines arent stopping the people from going, only creating a dangerous and toxic problem. Please reopen .

Here in Taos county, we've been seeing great numbers of dispersed campers and van lifers for two months. Their license plates are from a much wider variety of locations than is typical. For the most part they seem to be harmless but visitors from fully opened or never closed States mostly disregard our standards and directives. The local disdain for these visitors is palpable.

I want these idiots who leave smoldering campfires and their trash jailed. Ten dollars says it is men who are doing this. Slobs.

I camped with friends in dispersed areas along the Trampas River (Camino Real District, Carson National Forest) last weekend. I did notice some garbage left behind. More concerning were three campfires. When I asked folks if they were aware of the fire ban, all replied "no." All three parties agreed to put their fires out, two of three did so. I know it should be a camper's responsibility to check on restrictions, but I would like a signs at the forest entrances stating the fire ban. Perhaps a greater PR effort would help.

Out here in La Ciengea, the Petroglyphs are accumulating more trash and traffic than ever before. One person's been living in the Petroglyphs parking lot for at least four weeks now in a pickup truck with a cover. Conveniently, there's a porta-potty there too, which makes it easy to set up shop long-term. I recognize that the newly homeless need a place to sleep, but trailhead parking lots aren't the solution. It's sad to see how people treat this beautiful land. It's also frustrating to see plastic bags of dog poop lying by the trail all the time now from out of towners and city dwellers - the fertilizer would be great for our plants, and it's hard to see the point of bagging dog poop when you're just going to leave the bag behind for all eternity.