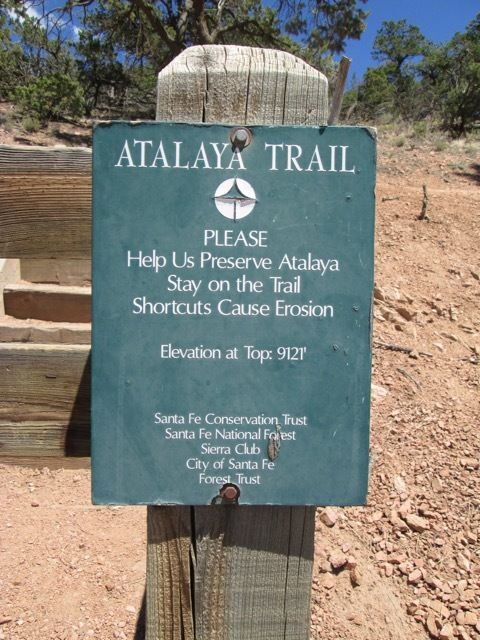 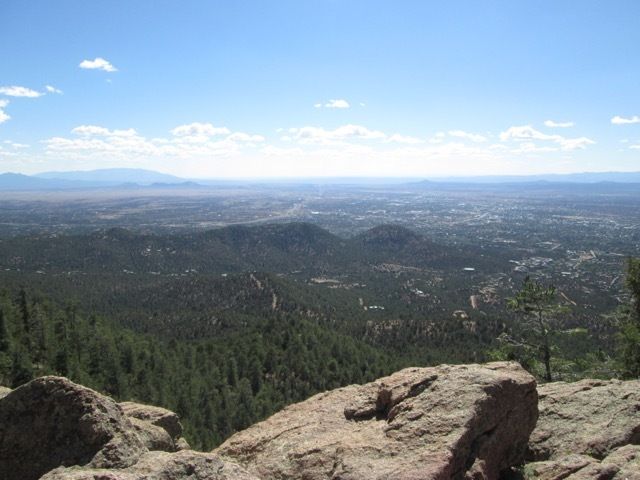 Gasping for air as they walked, volunteers on their way up the mountain to perform trail maintenance may have cursed themselves for spending so much time in front of computers. Some were able to chat on the way up, but most had to stop talking and focus on their breath — but this was Atalaya after all.

The Atalaya Trail, one of Santa Fe’s most popular and beloved trails, turns 24 this year. It has only been two dozen years since the trail up Santa Fe’s “Watchtower” was officially established in 1991 by the United States Forest Service with critical help from a small group called the Friends of Atalaya.

Many public trails in the West have a history of starting out as footpaths for accessing high country forests, for gathering wood or utilizing pasture land for sheep and cattle grazing. Trails that now lead into the foothills east of Santa Fe were originally developed for these purposes. Trails can be lost to fencing, private ownership, the construction of new homes or neighborhoods, or the development of roads on, over, or across traditional routes. The result is usually the end of the trail — literally and figuratively, for the public. Atalaya is among the fortunate few that have endured.

During Santa Fe’s building boom of the 1980s, the foothills of the Sangre de Cristos experienced a dramatic increase in residential development that gravely threatened access to Atalaya Peak. Fortunately, a group of local trail advocates with some legal muscle among their members negotiated a settlement with landowners to preserve the trail via several re-routes, eventually conveying a formal trail easement from the landowners to the Santa Fe National Forest. If not for the passion and determination of a handful of these friends and the willingness of the federal government to accept liability, there never would have been an official U.S. Forest Service trail leading up the mountain for all to enjoy.

Dale and Sylvia Ball, now living in Albuquerque, knew how vulnerable the unofficial Atalaya trail was to “progress.” Dale Ball formed the Santa Fe Conservation Trust, in part, to make trails a permanent feature of the city. The trust, along with its sister organization, the Trails Alliance of Santa Fe, has a rich history of playing a key role in the development of local trails: the Rail, Dale Ball, La Tierra, La Piedra, Arroyo Hondo, Spur Trails. If not for the dedication of a few individuals, Atalaya’s trail would surely have been lost. No economic strategy, support from the city council, or protests from neighbors alone would have saved the trail.

As the foothills became increasingly popular for hikers and bikers, so too were they becoming a treasure trove for builders. And, rather than a noticeable single onslaught of mass development, this construction was more selective and exclusive. It allowed for a sort of quiet crisis to emerge, whereby some of these longtime access points and trails were suddenly, and in most cases irreversibly, threatened by the purchase of land, the construction of a dream home, and a winding driveway and gate leading to the most breathtaking home site above the City Different.

This is where the true heroes came into the picture, looking towards the future of our city and taking the concept of public trails and turning it into reality. Without these trail heroes, access to Atalaya as well as the foothills and the mountains that lay beyond would have been lost forever.

In 2014, the trust adopted the Atalaya Trail from the Forest Service to help with maintenance and upkeep — a long-term and ongoing commitment. But the trust can’t do it alone. “Trail heroes” need to lend a hand. Several times throughout the year work details of between six and 12 volunteers are organized to perform maintenance. If you would like to help, please email the trust at info@sfct.org.

Charlie O’Leary is the executive director of the Santa Fe Conservation Trust.