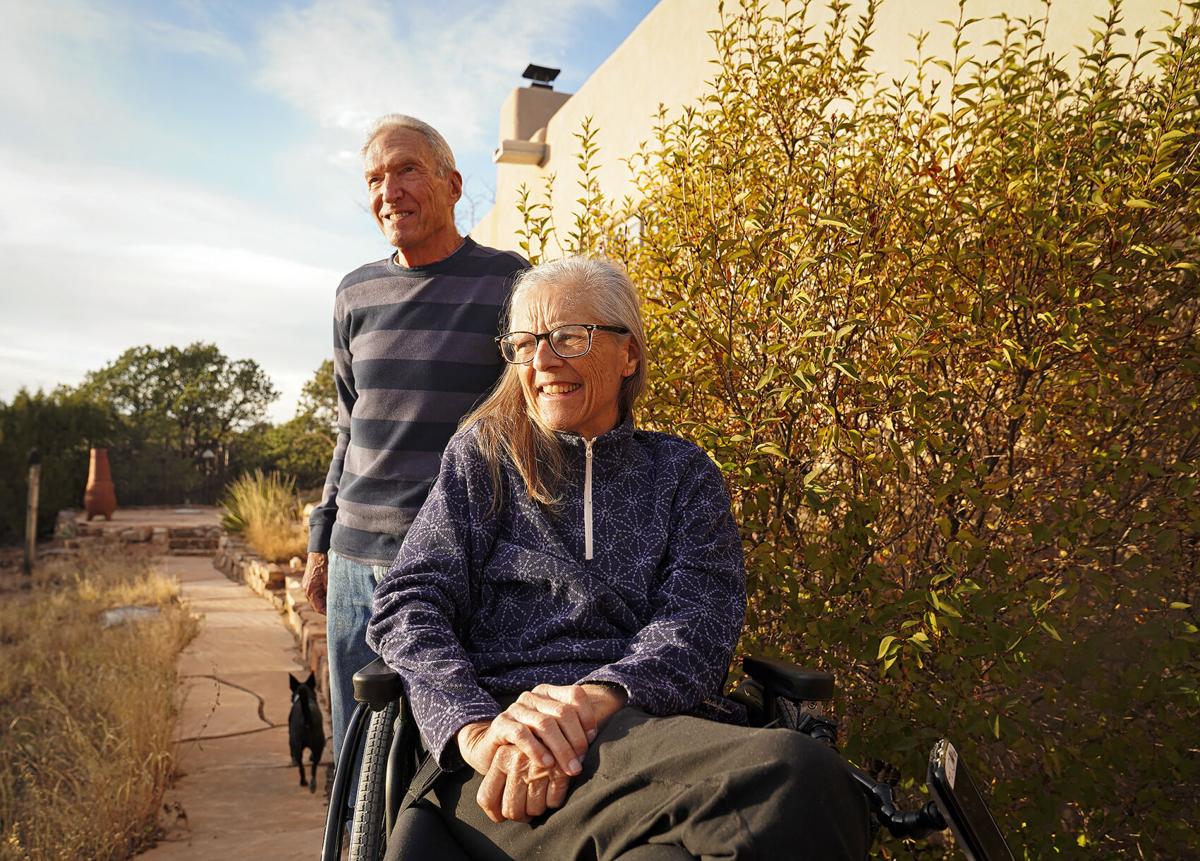 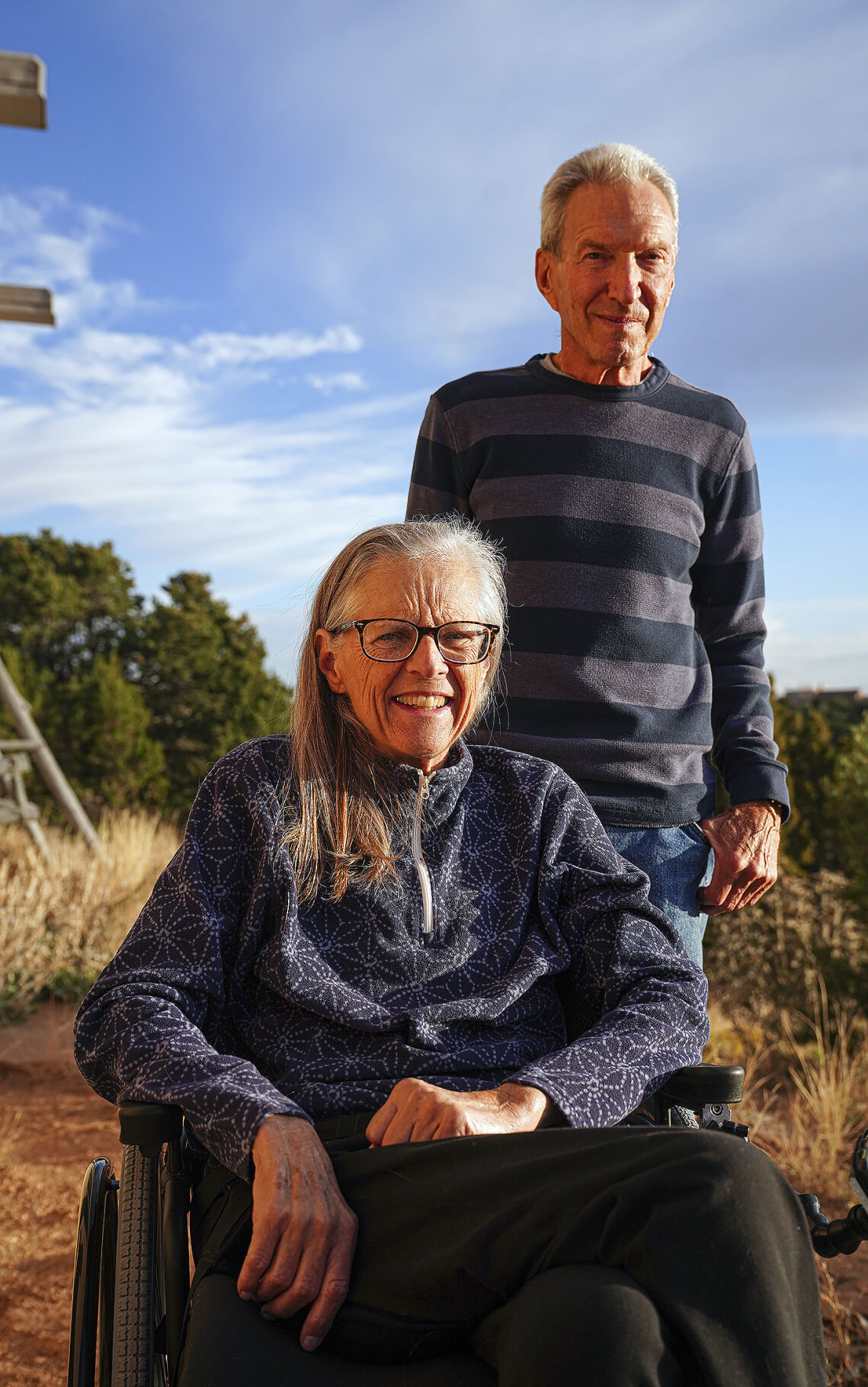 When Henry and Tina Lanman began dating, they didn’t do the traditional dinner and a movie.

Their idea of a hot date involved two wheels and a dirt trail.

“All our dates would be wrapped around some sort of motorcycle thing or bicycles. … We had the latest mountain bikes,” said Tina, who met Henry through her father while they were living in the San Francisco Bay Area.

Henry entered mountain bike competitions across Northern California, and “I was on the sidelines, cheering him on,” Tina said.

In 2001, the couple moved to Santa Fe, where Henry was raised. They continued to ride mountain bikes and even took a class through the U.S. Forest Service on how to build and maintain trails.

Over the years, they have volunteered countless hours to constructing and improving trails at the Galisteo Basin Preserve, Glorieta Adventure Camps and the Dale Ball and La Tierra trails. They also have worked in conjunction with the Commonweal Conservancy, Santa Fe Conservation Trust, the Forest Service, and the city and county of Santa Fe.

And that’s just the start: The Lanmans also have been involved with the Trails Alliance of Santa Fe, the Fat Tire Society, Keep Santa Fe Beautiful and the Crazy Off-road Racing Enthusiast Crew. All that hard work has earned the couple The New Mexican‘s 10 Who Made a Difference honor for 2020.

“We really just sort of dove into the trail work,” said Henry, 75. “It was kinda nice building trails that were sustainable, that wouldn’t just wash away and deteriorate right away.”

Originally an engineer, Henry spent 26 years with the fire department in Contra Costa County, Calif., retiring as a captain. During that time, he was part of a crew that graded trails in the spring to make them accessible for fire equipment.

“That was sort of my first introduction to sloping trails in order to mitigate the water problems when it rains,” he said.

“So I had a good background in dirt management, I guess you could say.”

After moving to Santa Fe, “I just got a lot more involved and learned a lot more about trail construction and mitigating features” by taking a class through the Forest Service, he said.

“It’s funny. Once you start learning how to build trails and maintain them, when you’re just out walking on them, you’ll look at a trail and say, ‘This needs to be done and this needs to be done.’ And it just almost becomes an obsession where you want to keep fixing things all the time,” he added.

For the past three years, he has worked on trail improvements in the Galisteo Basin Preserve south of Santa Fe. A two-mile loop on the western edge of the preserve is called “Henry’s World.” It was named after Lanman,

one of the basin’s “most active and cherished volunteers,” according to trailforks.com.

“The trails we’ve built out in Galisteo Preserve — we’ve put in, I don’t know, 12, 14 miles of new trails in the last few years, and the place has just become a gold mine for everybody,” Henry said.

Sarah Noss, executive director of the Santa Fe Conservation Trust, grew up on the same street as Henry. She said he has worked tirelessly to improve the region’s trails.

“I have seen him in action out in the Galisteo Basin on the trails out there. He is a master flagger of new trails, working with the contours of the land to create fun trails that will [repel] water to withstand the test of rain, mud and wind,” Noss wrote in nominating him for the 10 Who Made a Difference honor.

Still, the coronavirus pandemic has slowed progress on building more trails, forcing volunteers to work in socially-distanced groups of just two or three.

Another setback occurred in May when Tina fell and broke her neck. After surgery in Albuquerque, she was transferred to a hospital in Colorado that specializes in spinal cord and traumatic brain injuries, where she spent three months rehabilitating. She and Henry returned home in late August.

“We’ve been trying to get her going again ever since,” Henry said. “It’s been a full-time job for me just taking care of Tina, so I haven’t been able to do any trail work.”

Their son, also named Henry, works as a geologist at Los Alamos National Laboratory. A daughter, Ziggy, is working on a doctorate in physical therapy at the University of Colorado’s Anschutz Medical Campus.

“Both have become just really, really good mountain bike riders — really, really talented,” Henry said. “Sometimes it makes me scared because I see the things that they do and it kind of blows me away. Dropping off these huge rock faces and stuff. They make it look easy.”

Henry still rides as much as he can. “It’s my passion,” he said.

But he gets a deeper satisfaction from building a new trail.

“After you’ve done it, you look at the enjoyment that everybody’s getting out of it plus yourself, the accomplishment. It just feels good,” he said. “If you do it right and it’s sustainable, you can look at it a few years later and think, ‘Wow, I really did that right. It’s not eroding. It’s not deteriorating.’ ”

The photo caption says they moved to Santa Fe in 2014; the text says, 2001. That needs clarification.

They sound like an awesome couple, and Henry’s World is an awesome trail.