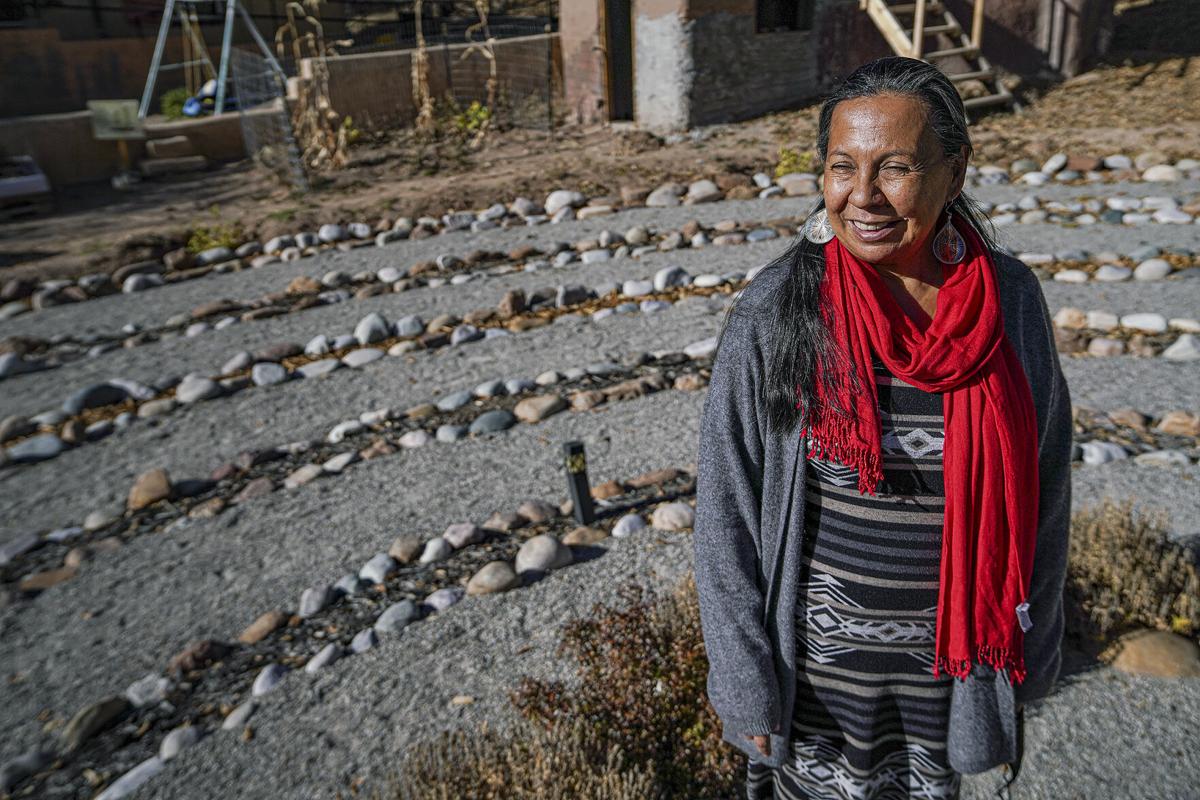 Lupe Salazar smiles from within the labyrinth she and colleagues made outside of Barrios Unidos in Chimayó. Salazar, an Española native, is the founder and executive director of Chimayó-based Barrios Unidos, which provides families with support when a member of the community becomes addicted to drugs or alcohol, and instruction on how to heal from the ensuing trauma. 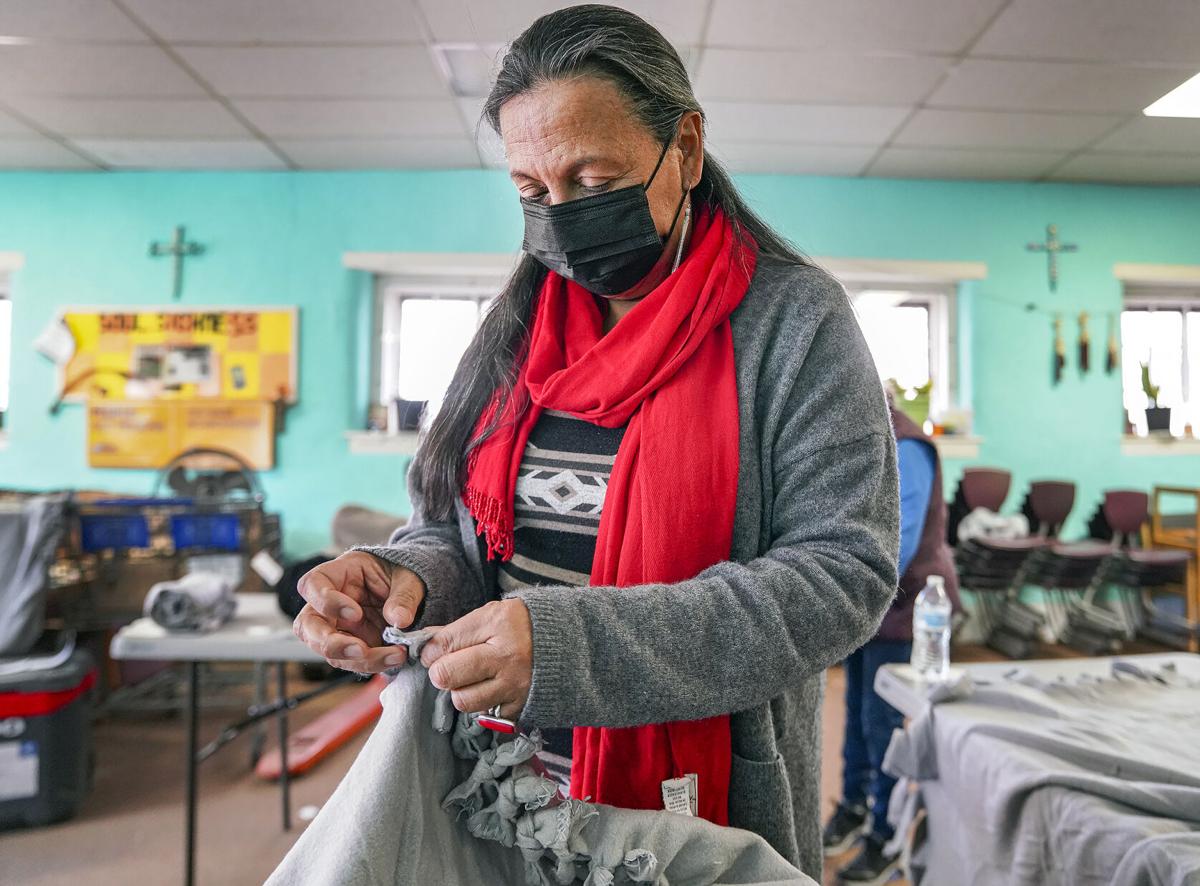 Lupe Salazar, with other volunteers, works last week on making blankets for elderly and in-need community members at the nonprofit she established in Chimayó. Salazar, an Española native, is the founder and executive director of Barrios Unidos, which provides families with support when a member of the community becomes addicted to drugs or alcohol, and instruction on how to heal from the trauma. 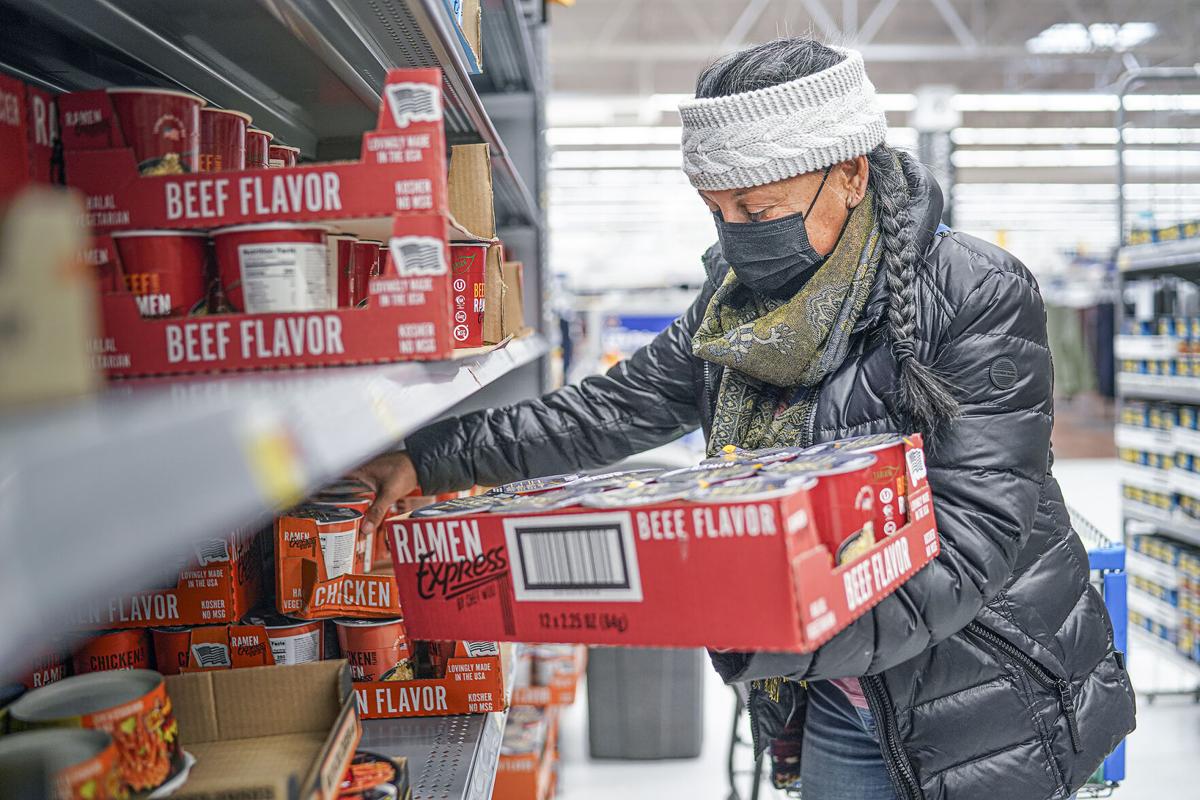 Lupe Salazar loads up with soups as she shops for food and others goods to homeless individuals Nov.11 in Española. Salazar, an Española native, is also the founder and executive director of Chimayó-based Barrios Unidos, which provides families with support when a member of the community becomes addicted to drugs or alcohol, and instruction on how to heal from the ensuing trauma. 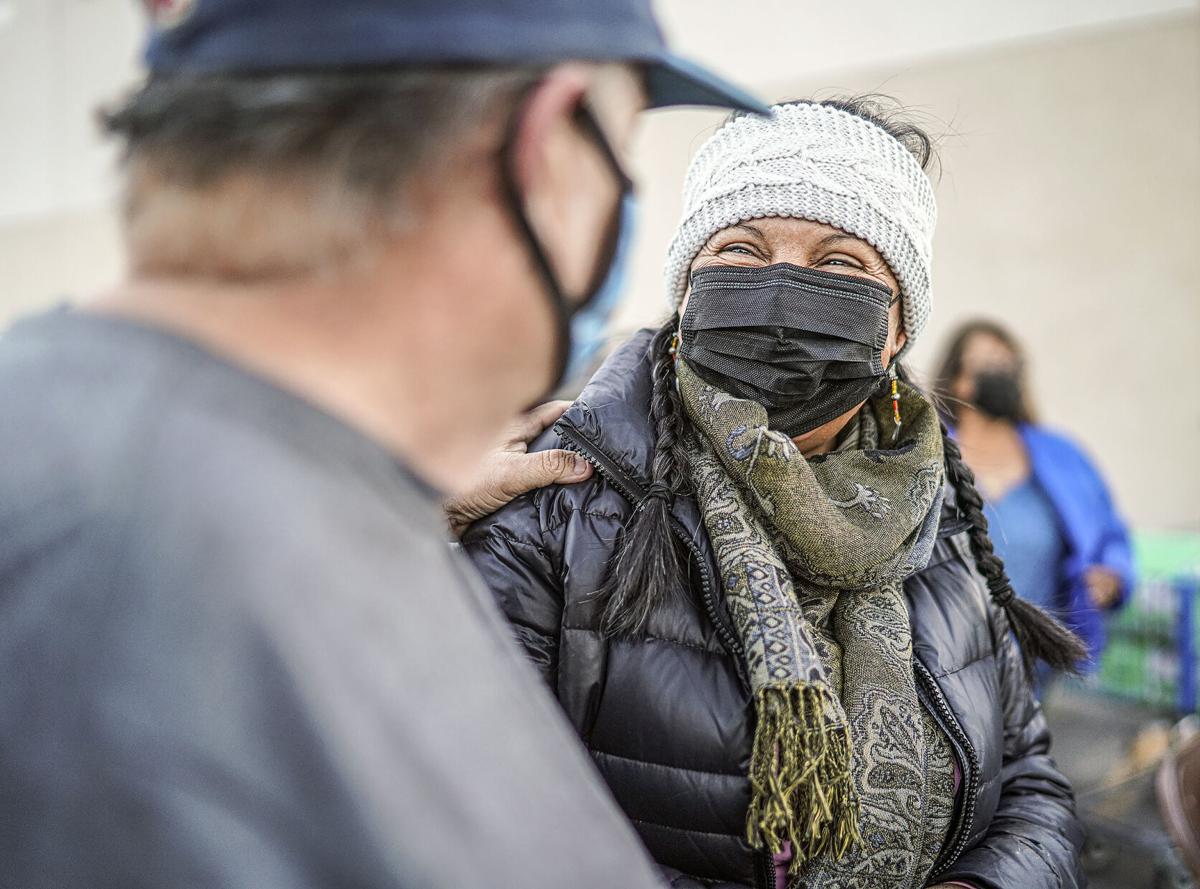 Lupe Salazar is greeted by a friend while she and other volunteers distribute goods to homeless individuals in the community on Nov.11 in Española.

Lupe Salazar set out to find help when her son became addicted to drugs.

She didn’t find the aid she was looking for, but she discovered a new mission for herself: Building the support systems her family and community desperately needed.

Salazar, 54, an Española native and lifelong resident of the Española Valley, is the founder and executive director of Chimayó-based Barrios Unidos, which provides families with support when a member of the community becomes addicted to drugs or alcohol and gives instruction on how to heal from the ensuing trauma.

The center offers counseling, education, training and healing for addicts and their families.

“Our community is small enough where we should have addressed addiction, and we didn’t,” Salazar said. Instead, “we tried to cover it up, to pretend that it wasn’t there.”

Along with her work in community activism, Salazar has another role that’s all too common in her community: She’s a grandmother who is raising two of her grandchildren. The girls are the daughters of her son Fernando Espinoza, who has struggled with addiction.

Because of her efforts, Salazar has been selected as one of The New Mexican‘s 10 Who Made a Difference for 2021.

Her journey began 18 years ago, when her son Espinoza was arrested for drunken driving. He was booked in the municipal jail in Española. When she would visit him, Salazar said, “He’s straight up drunk. I was like, ‘What the hell is wrong with him?’ ”

She believes her son also began to shoot up heroin during his time in jail.

She was seen, but not heard, by those in positions of power, she said, adding she’s not certain whether it was because she did not have a college degree or because she is a woman.

“Not that I was trying to get my son out of jail,” she said. “I’ve always firmly believed if you do your crime, you do your time. I blindly thought: ‘You go to jail, you pay back your debt to society and you come out a productive citizen.’ “

But, she added, “That was not at all what was happening in Rio Arriba County.”

She decided it was time to get a bachelor’s degree, so she enrolled in classes at Northern New Mexico College in Española and began studying integrative health science. When her academic program there was cut, she enrolled in humanities courses and began a new approach to understanding addiction.

“I tried to learn everything that I could about heroin because I didn’t know how this drug could come in and grab so many people by the balls and not let go,” she said. “What was wrong with my community?”

She came to understand addiction is a disease.

Salazar said she felt stigmatized for having a son who was an addict. She struggled to find a place to talk about her ordeal as Espinoza’s condition deteriorated.

In 2015, she established Barrios Unidos as “an interdisciplinary, intergenerational and intercultural community” exploring cultural and psychological issues tied to addiction.

Salazar and volunteers provide boxes of food and donated clothes to families battling addiction, and they host weekly outreach events for grandparents who take care of their grandchildren, largely due to addiction in the family.

Salazar said there are 25 grandparents and 45 grandchildren, including her own granddaughters, in the program.

To help families who’ve lost members to drug addiction, Barrios Unidos has created a series of memorial quilts. “The blanket is about not forgetting and keeping their memory alive,” Salazar said.

To effect change on a larger scale, the group has partnered with the Transdisciplinary Research, Equity and Engagement Center for Advancing Behavioral Health — the TREE Center — at the University of New Mexico.

It also has teamed up with the National Latino Behavioral Health Association, The Mountain Center, Santa Fe Prevention Alliance, Tewa Women United, the Office of Peer Recovery and Engagement, and other nonprofit organizations.

“It’s hard work to be doing what she’s doing, and she has the power to stay strong,” said Carmen Rodriguez, who nominated Salazar for the 10 Who Made a Difference award.

Salazar and Rodriguez met years ago at a regional development conference for Northern New Mexico organizations and have been allies ever since.

“She’s such a multitasker, but she is — at the same time — always patient,” Rodriguez said. “And she has such tenderness in her heart. She has changed a lot of people’s lives.”

The 10 Who Made a Difference series will continue through Dec. 4 with stories featuring the following honorees:

Tuesday: Juliana and Tejinder Ciano, owners of Reunity Resource and the Reunity Farm

Since 1985, The New Mexican has been publishing a holiday series recognizing people from throughout Northern New Mexico whose selfless and tir…

First and foremost, drug and alcohol addiction is everywhere and in every family. It affects all races and socioeconomic status, addiction does not discriminate. If you don’t believe me, you’re addicted to lying. I know folks who are educated and come from “good” respected families and they are addicted to prescription pain pills. This could have happened as a result of a traumatic injury or illness. That said, community based non-profits can play a pivotal role in addressing the needs of affected families. So, I applaud Ms. Espinoza for her work in alleviating the effects of this emotional trauma in Chimayo and elsewhere!