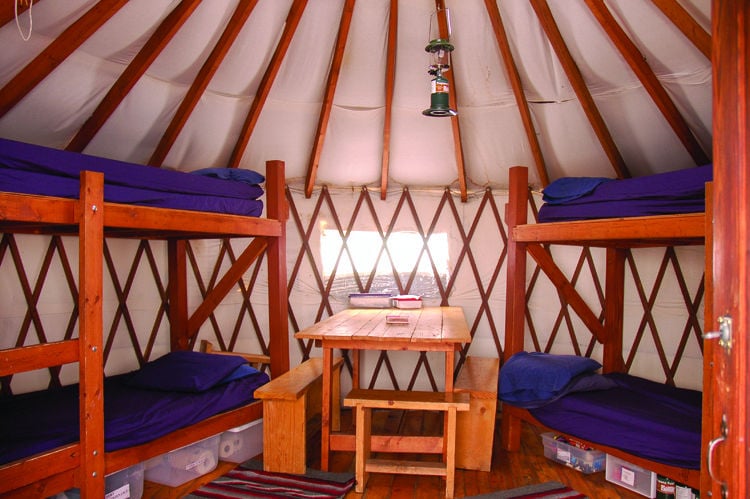 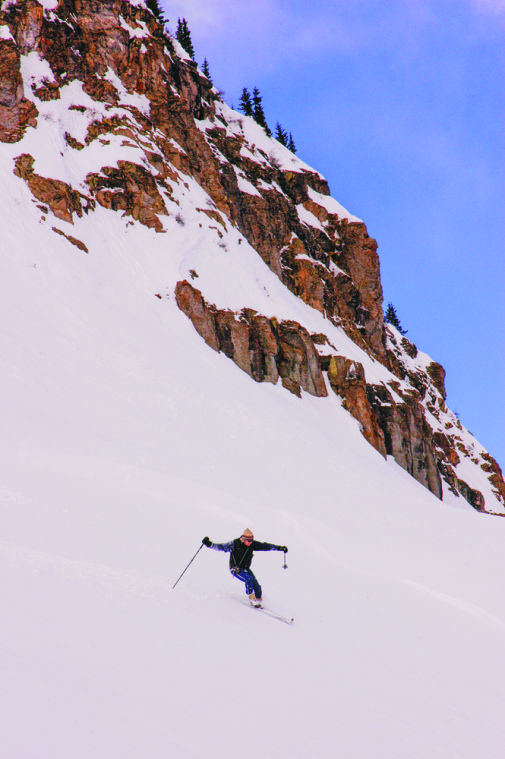 Two and a half hours north of Santa Fe lies a world apart, the realm of the southern San Juan Mountains. Here, amidst dark forests of spruce and aspen, sunlit meadows and towering peaks, is a place few people visit in summer, and even fewer visit in the depths of winter, when temperatures commonly reach below zero and snow buries the frozen land.

Scattered across this beautiful landscape are four yurts owned and operated by Doug MacLennan and his company, Southwest Nordic Adventures. The yurts, round canvas-covered structures of Mongolian origin with raised wooden floors, provide skiers with secure and comfortable refuges from which to explore this winter wilderness. Several years ago, I, photographer Kitty Leaken and Santa Fe resident Steve Tanner made a foray into this icy locale, spending two nights in the company’s Grouse Creek yurt.

We set off from the trailhead near Cumbres Pass on Colorado State Highway 17 just over the Colorado line, some 14 miles north of Chama, on old cross-country waxed and waxless skis and alpine touring equipment. The sun was out — in fact, we began to work up a sweat — and the day young, yet even then the thought struck me that navigating the route in a storm or low light might be scary and difficult.

Since establishing his first yurt in 1987, MacLennan has carefully marked all the routes with blue-painted plywood squares tied to tree limbs and 6-foot poles driven into the snowpacked meadows. In the woods, the trail made by previous skiers was always discernible; but on the wind-swept meadow bottoms, it was often obliterated for lengthy sections. Instructions on the yurt website state that you should be competent with a compass and topographic maps, and that route-finding skills are needed. We had such skills, but even so, we were grateful we were not out in a storm.

“Every season has its set of tales,” admits MacLennan, touching upon the sensitive subject of getting lost. No one has ever perished, but in the past some parties were forced to bivouac overnight. More commonly, people trek back to their cars at night, their headlamps glowing in driving snow.

The afternoon had cooled to a frosty 20 degrees as we tromped up to the Grouse Creek yurt, covering 4.1 miles and 1,000 feet of vertical gain. That doesn’t sound like much, but, fatigued, we all whooped with joy when at last we rounded a bend and spotted the yurt sitting at the edge of a meadow, its pointed top barely protruding above the snow.

“People are often fooled by how much effort it takes to cover such distances carrying a pack,” notes MacLennan. Indeed. We were pooped, but Tanner quickly had a fire going in the yurt’s excellent Regency woodstove, its glass front glowing a reassuring orange and red, the popping sounds telling us we would survive this night just east of the Continental Divide.

We ate some snacks, rested and warmed up. Restored, Tanner and I decided to go out and look for some turns, and we re-donned our clothing. With the inside temperature now at 64 degrees and 2 below zero outside, it felt like we were preparing for a space walk or an excursion an astronaut will take one day on Mars, leaving the security of our pod.

We worked our way up, found an opening in the old-growth forest and dropped gently down into a little clearing, where we each had eight or so fine turns in a foot of light powder before the terrain flattened out. It put a smile on our faces and made all the effort worthwhile. I thought to myself that at a ski area, one would take such turns for granted. But out here, each set was savored, discussed and filed away in the memory banks.

The next day dawned clear as a dazzling sun rose over the Sangre de Cristo Range of southern Colorado. We emerged from the yurt to gaze, transfixed, at the sight. To the northeast rose massive Blanca Peak, Colorado’s fourth highest, at 14,345 feet. A portion of the huge San Luis Valley lay at our feet, harboring farms, fields and the town of Alamosa. Close behind us, cliffs towered upward, marking the east-facing base of Jarosa Peak.

After breakfast we headed out, seeking turns. The treeless slopes at the base of the Jarosa ridge, running more than a mile and holding numerous chutes and bowls, beckoned. Under certain conditions — lots of fresh snow over a frozen base — these slopes could slide, but a recent warm-up and little new snow meant it was stable, so we climbed upward until it rose too steeply for our comfort levels. Getting hurt out here would require a complex rescue operation, so we played it safe. The snow was excellent, with just a hint of sun crust under 3 to 4 inches of wind-deposited fluff, and perfect for carving. We climbed up, turned and skied down, making six or eight or even a dozen linked turns, then climbed again and skied down, working our way across the slope, over and over, until our legs were shaking and hunger called us in for a break.

That afternoon, after fueling up and a brief nap in our warm nest, we emerged again to sample the deeper powder in the forest below the yurt. The terrain was flatter and turns harder to find, but each one was like a hieroglyphic etched in white that said, “We Are Grateful.”

That night, after a good meal, I bundled up and stepped outside to look at the stars. I don’t recall ever having seen such a dazzling array of night lights. But the cold was punishing, and I could do little more than scan the constellations I know and note Mars glowing reddish-orange overhead. The view reminded me of how unimaginably vast the universe is.

Each of the four Cumbres Pass yurts sleeps a maximum of six people (though four is far more comfortable). Pillows, mattresses and clean mattress covers are provided, as are all cooking pots, dishes, utensils and a three-burner propane stove. Water is melted from snow on the stove, so guests need to bring only food, clothing, ski gear and sleeping bags.

In addition to the Cumbres Pass yurts, MacLennan also operates a double-size yurt at Bull of the Woods, accessed from Taos Ski Valley, that can accommodate 10 people. It is 2 miles in, with a steep vertical gain of 1,500 feet. Advanced and extreme skiing terrain lies just out the door. The Cumbres yurts rent for $85 per night Monday to Thursday, $100 on Friday and Sunday and $125 on Saturday. The Taos yurt is $100 per night Monday to Thursday, $125 Friday and Sunday and $145 on Saturday. For additional fees, MacLennan can also serve as your guide and cook. The season runs from late November into April. The yurts are typically booked well in advance every weekend, particularly the Bull of the Woods and Neff Mountain yurts. Most are available on short notice on weekdays. Additional details on what to bring, trail descriptions and other information is found on the company website, www.SouthwestNordicCenter.com, or by phone at 575-758-4761.