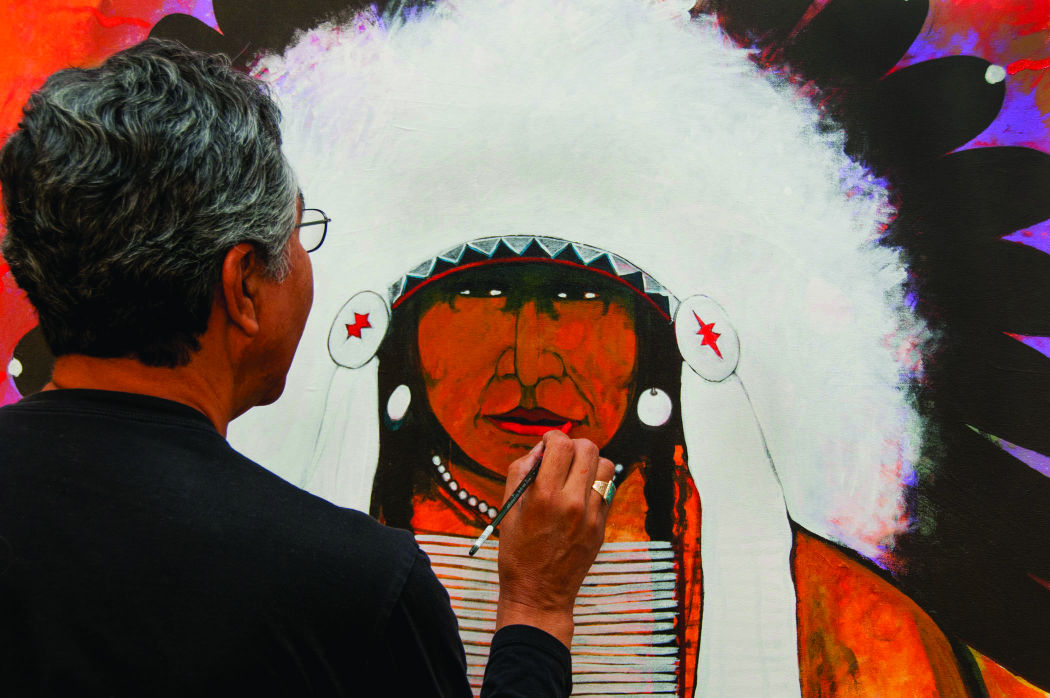 Kevin Red Starr in his studio. 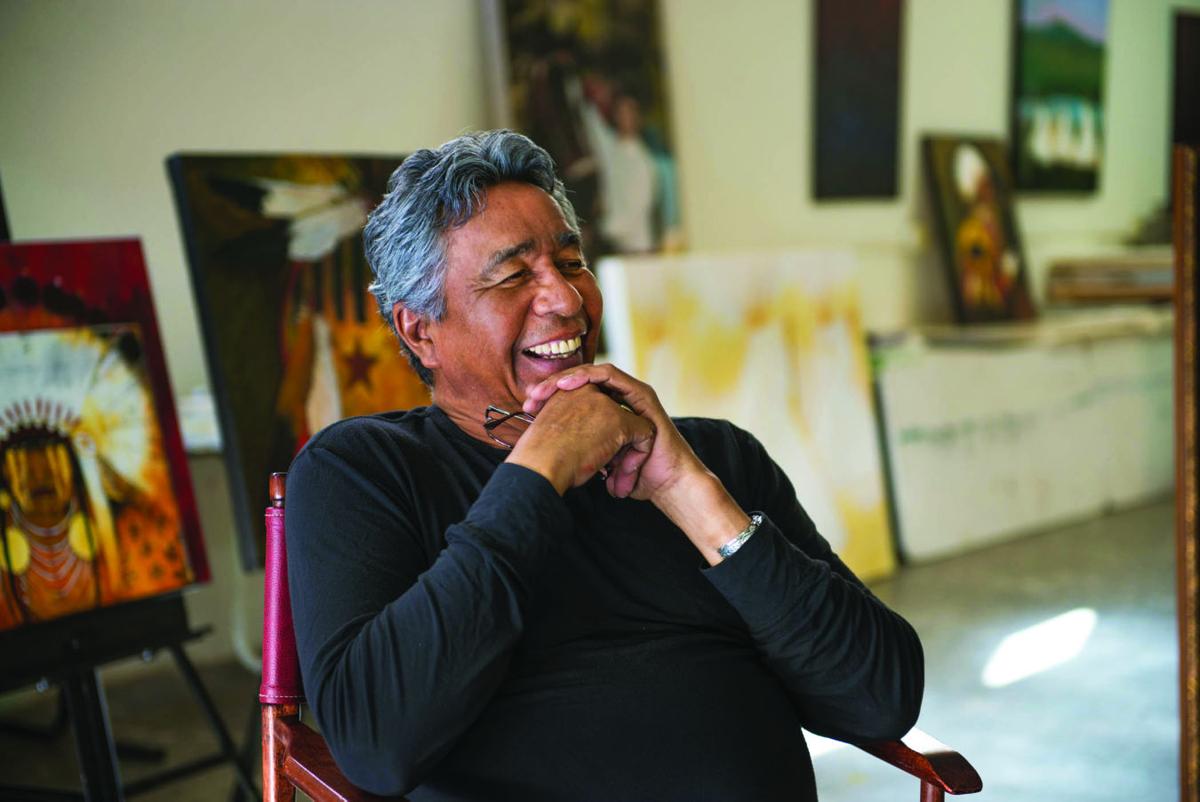 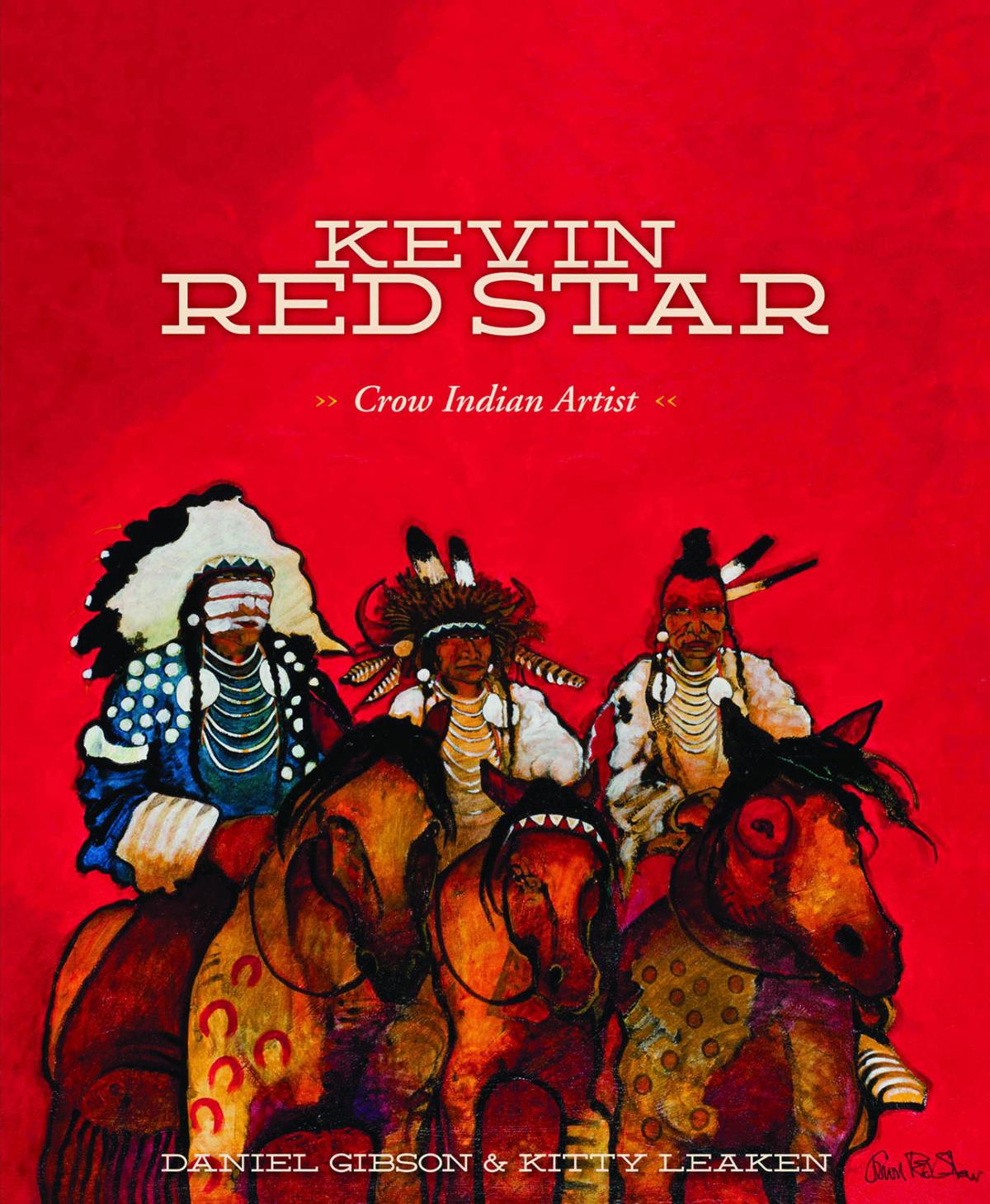 Kevin Red Starr in his studio.

When more than a thousand artists gather for the Santa Fe Indian Market, many of the younger creative souls will turn their hopes to the future. They may envision themselves in 30 years as having led creative lives, with their artwork entrusted to private collections and museums around the world, their names widely known to art connoisseurs and critics. They might, in short, dream of living the kind of life one of their own has in fact led — Crow Indian painter Kevin Red Star.

In August 1962, Red Star made his first airplane flight, arriving in Santa Fe from Montana to join in the inaugural class of the Institute of American Indian Arts. It was a defining moment in launching the contemporary American Indian art movement. Here he joined fellow students T.C. Cannon (Caddo/Kiowa), George Flett (Spokane) and Doug Hyde (Nez Perce/Assiniboine/Chippewa), and faculty and administrators that included Lloyd Kiva New (Cherokee), Fritz Scholder (Luiseño), Allan Houser (Chiricahua Apache) and Charles Loloma (Hopi). It was the beginning of a remarkable career among a stellar cast of other aspiring artists, which continues to play out these many years later.

“Many of us had come from places where we were treated badly by non-Indian instructors who looked down on you and didn’t promote you, even though you were good,” Red Star noted in this writer’s just-released book (see sidebar), which documents his life and art. “It was a blessing to have that situation turned around, and given a better opportunity, the kids naturally excelled. We saw the instructors as successful people, personable professionals, and they were Indian artists. They were our models, at least mine.”

Following a stint at the San Francisco Art Institute and some lean years back in Montana playing in a family band while continuing to paint, Red Star gravitated back to Santa Fe. Here he settled into a studio alongside Crow painter Earl Biss and other Native and non-Native artists. He recalled, “We shared a great deal in those days — clients, ideas, experiences. We wanted to encourage everyone. The camaraderie was really important early on.” Soon Red Star and many of his associates were securing local and out-of-state gallery shows from New York City to Beverly Hills. The good times rolled and their careers with it. A 1980 article in the New York Post stated Red Star was “the embodiment of a blossoming group of new American Indian artists. He gives a special strength to his subject — men, women, children or horses — so they appear to float in space, timeless components in an ever-changing world.”

Since then, the artist has divided his time between Santa Fe and Montana, where he maintains a studio in Roberts and lives nearby in Red Lodge, just outside the Crow reservation.

Several times in his long career, Red Star has served as a judge for the painting, print and photography category at the Santa Fe Indian Market. He noted, “It’s the best of the best, so it’s a fun but also difficult job that requires an expert eye. I really enjoy doing it, giving back to the community that has done so much for me.” He explains, however, that he has actually never exhibited in Indian Market. “I was lucky enough to begin showing in galleries right away. But I owe a debt to the event because it brings in so many collectors who also visit the galleries after touring the booths. So it’s been a big boost to my work.”

While Santa Fe and its institutions have played central roles in Red Star’s career, his wellspring of inspiration is directly linked to his Crow heritage. All of his paintings in oils and acrylics — and his far more limited number of prints and works in clay and other media — refer to his tribe: their great leaders of the past, their heritage as great horsemen, ceremonial dancers, the stately women who hold the families together, and the lands and animals they revere. Tepees in a driving snowstorm suggest abstract art but are firmly rooted in the Montana plains. Scouts carefully wiggle through the tall prairie grasses in search of the vital buffalo. Warriors holding iconic shields prepare for battle. Their dignity, resourcefulness, pride and determination ride off the canvas and into the world at large.

“Basically, I’m a romanticist,” he told the late writer Stephen Parks in Southwest Art in 1980. “I like that life of the old days, that closeness to nature. If there is an overall vision to my work, I guess it’s that there is a lot to be learned from the way things were.”

Besides caring for his large extended family, including his three daughters and adopted son, and his large circle of friends, Red Star has also shown a lifelong interest in mentoring Native students and young artists. Does he have any words of encouragement or advice to the eager young artists pouring into Santa Fe right now to fulfill their destiny? “There is a need to go beyond the borders the teachers and society have set,” he stated. “You have to have some goal — just try! It’s OK if you fail, but try! You need to take chances. I have taken some chances; that’s what makes me a little different. I ventured out, not really knowing exactly what I was seeking.”

Red Star counsels hard work, personal discipline and opening up to the creative process. “When it is going right, it is like something else takes over. Something carries me. Before I know it, I’ve been at it for three, four hours. I should be tired but I feel good, I am focused. I mix the right pigments. If you go to work daily and get the flow of production going, the energy will go out and bring you what you need.”

For Kevin Red Star, the returns are in, and at age 70 he is doing perhaps the best work of his entire career. He has pushed out into unknown territory, scouting the global fine art terrain. It is a dangerous journey, full of pitfalls, enemies and disappointments. But with faith, dedication and vision, he has returned to tell the tales and open a path for other Native artists to follow.

The first comprehensive book profiling the life and work of Kevin Red Star has just been published. Kevin Red Star: Crow Indian Artist (Gibbs Smith) is a large-format book consisting predominately of reproductions of Red Star’s best art works (about 150 images) over his 50-year career, including his student days, plus historic photos of the Crow people and their material culture, and documentary photography of the artist, his family, his working environment, Crow Fair and other Montana scenes that inspire the artist’s work. The photography is by Kitty Leaken of Santa Fe, whose previous projects include the book Contemporary Native American Artists.

The text, by Daniel Gibson of Santa Fe — who served as editor of Native Peoples magazine for 12 years — details the pre-eminent American Indian artist’s early reservation childhood among his large traditional family, his years at the fledgling Institute of American Indian Arts in Santa Fe, his difficult early years as a professional artist and his subsequent career. The book, which closes with a look at Red Star’s present life, also includes a foreword by W. Richard West (Southern Cheyenne), comments by a variety of art critics and a summary of the artist’s exhibitions, museum holdings, awards and honors.

Attend a book signing and hear remarks by Crow painter Kevin Red Star at the release of Kevin Red Star: Crow Indian Artist, Wednesday, Aug. 20, 5:30 p.m., Collected Works Bookstore, 202 Galisteo St., Santa Fe (505-988-4226). The artist, photographer, author and publisher will be present. Proceeds from sales of the book during the week go to the Southwestern Association for Indian Arts (SWAIA), the sponsor of Indian Market.