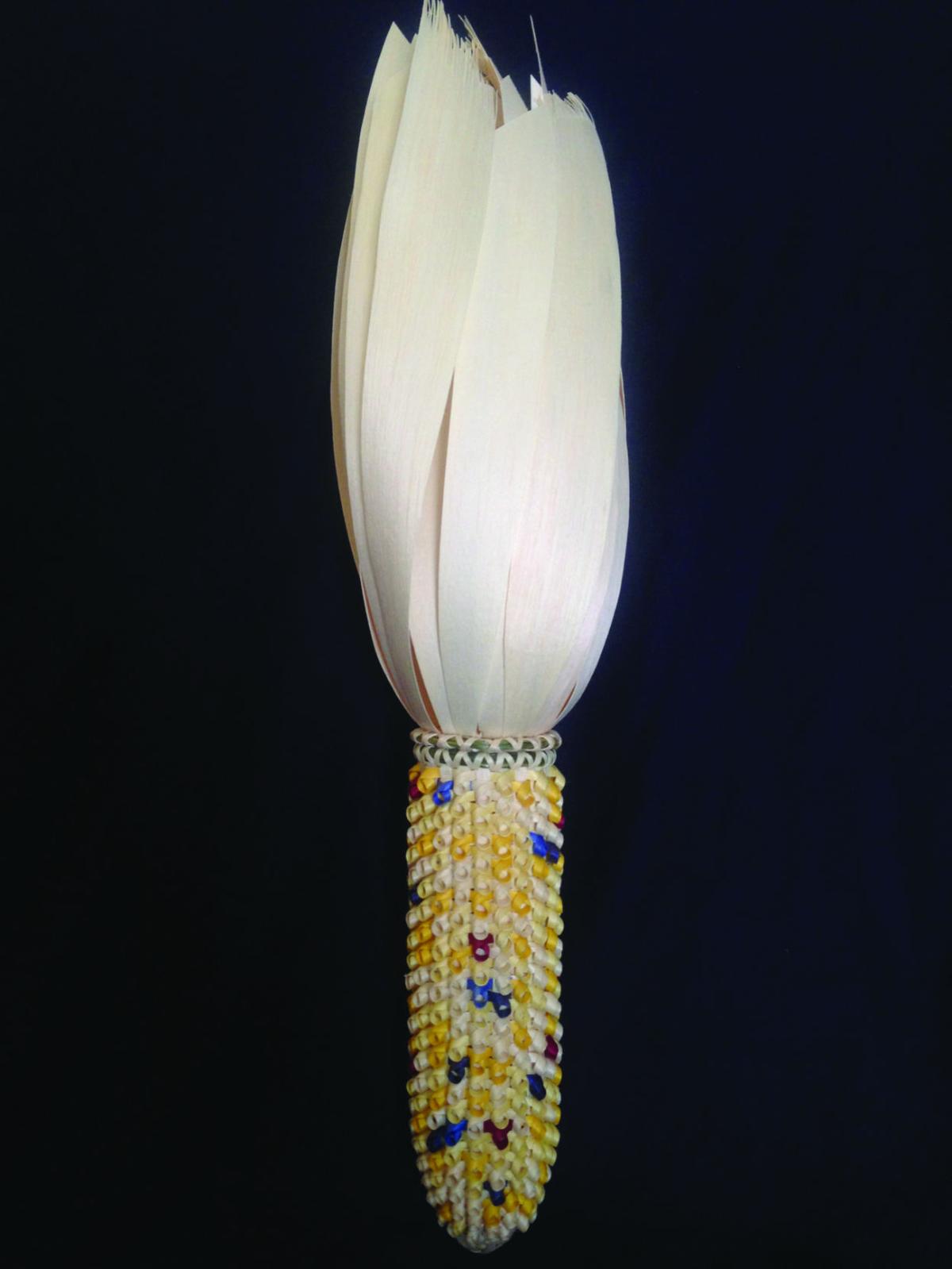 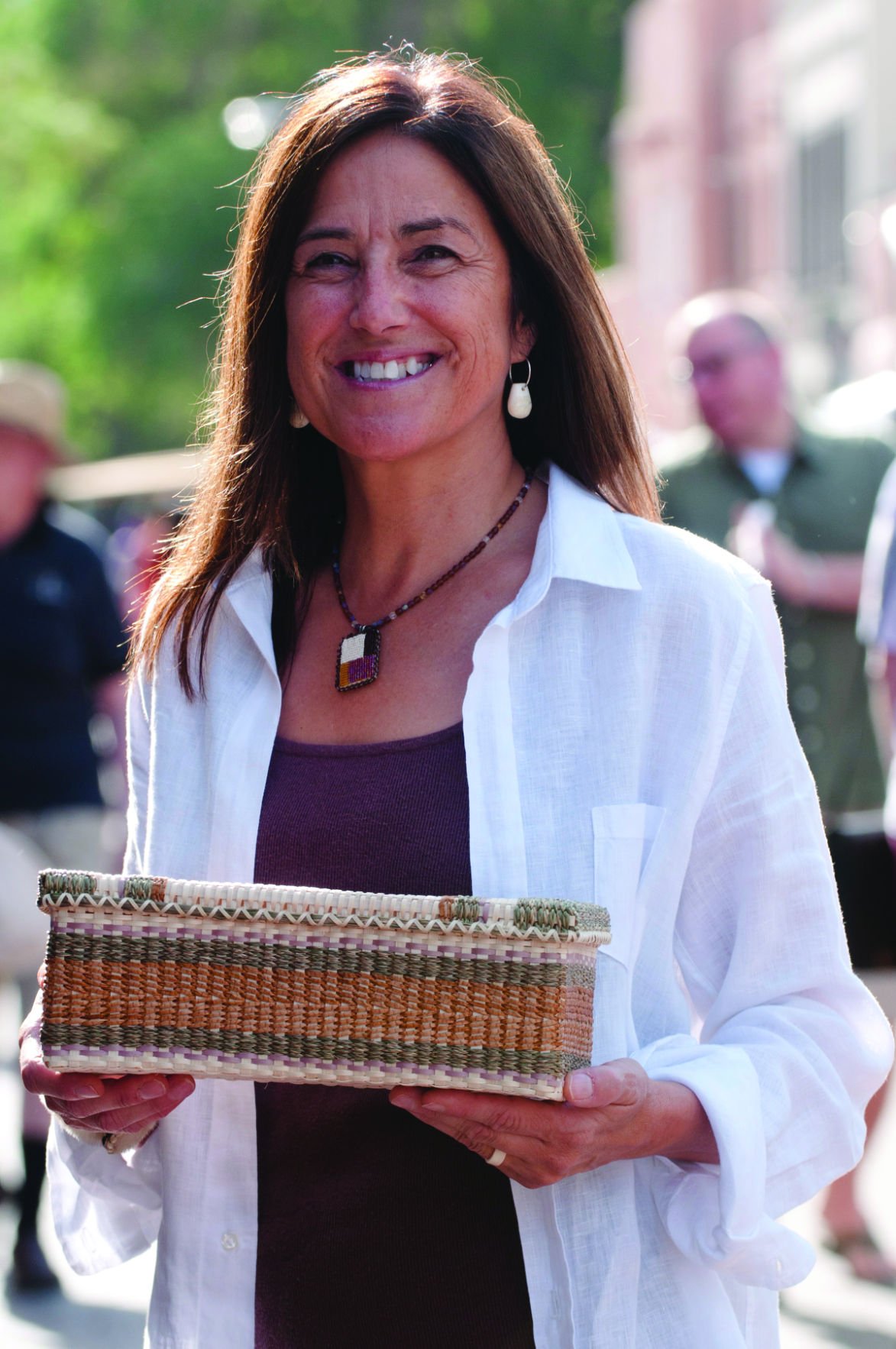 for art and environment.

The creative life work of Theresa Secord, a member of the Penobscot Indian Nation, is all about preserving rich cultural traditions. The artist weaves her ash and sweetgrass baskets using the same wooden forms and tools that her great-grandmother used, handed down from the 1800s. She also creates the same shapes that her great-grandmother wove many years ago. Secord often accents her baskets with purple and pink lines. The colorful hues are created the traditional way, using wild Maine blueberries and raspberries. “I prefer to use the natural dyes,” Secord said.

Secord, along with other Natives from Maine, has been working to ensure that traditional ways continue to be handed down through the generations. “We have a lot of advocacy for the art and the environment among the tribes,” Secord said. The four tribes in Maine — the Maliseet, Micmac, Passamaquoddy and Penobscot — are working together to save basketry traditions through the Maine Indian Basketmakers Alliance (MIBA), founded by Secord and others in 1993 (www.maineindianbaskets.org).

“The tribes here have active forestry programs,” she explained. They, along with the state and federal forest services and the University of Maine, are working to preserve the ash forests, which face devastation due to the invasive emerald ash borer that has already spread into adjacent New Hampshire. With a potential reduction in ash trees, it’s hard to predict the future of Maine basketmaking, particularly with pressure on the resources from widespread usage.

“Tribal people are so adaptable,” said Secord, and they are doing their best to meet these potential changes head-on. “Trying to conserve is probably the best thing.” Secord advocates exploring alternative materials to weave with to conserve ash. She uses cedar bark, a nontraditional material in Maine basketry, in several of her pieces for its “great color and texture” as well as aromatherapeutic qualities. With less future availability of ash, she also sees the opportunity to revive other cultural methods of creating, such as working with basswood fiber, which is employed in making bags and sashes and has not been extensively used in 90 years.

How will a reduction in ash affect the pricing of baskets? “Everything is unpredictable,” Secord answered. As the future holds many unknowns, basketmakers have been documenting their knowledge with the University of Maine in an effort to preserve their rich culture.

The making of baskets is an old industry, with many components. “People have been selling baskets to tourists on the east coast of Maine since the 1840s,” Secord stated. Natives and non-Natives alike utilize traditional baskets, which they carry on their backs while hunting, fishing, trapping and canoeing.

“There’s an old system in place,” revealed Secord. When it comes to a single basket, “as many as four or five people have been involved.” To obtain their materials, male basketmakers harvest the ash. Then a son or grandson may hand pound the log to process the material. Sweetgrass is picked along the coast of Maine and may be sold to other basketmakers for as much as $45 a pound. There are braiders in the industry who braid the sweetgrass and sell it to basket makers by the yard in up to 100-yard bundles. The ash used in baskets is sold rolled up in splints. Secord added that the tools also have to be handmade, as well as the wooden forms used to shape the baskets. Unlike some tribes, both men and women are heavily engaged in the basketry industry in Maine and have been, historically.

While Secord visited her family on the reservation throughout her youth and spent time with her basketmaking great-grandmother, she didn’t begin weaving until some years later. When her tribe, together with the Passamaquoddy tribe, won a record 300,000 acres of their land back through the 1980 Maine Indian Land Claims settlement, the tribal administrators began calling up young tribal members with natural resource degrees.

Equipped with a master’s degree in geology, Secord went to work for the Penobscot Indian Nation. While there, she connected with a friend of her great-grandmother’s, Madeline Tomer Shay, who not only mentored her in their language but also taught her basketmaking. “It became this great friendship for five years,” said Secord. Together they joined with elders in Maine’s tribal communities to form MIBA, with a mission to save the ancient basketry traditions, which has been Secord’s focus as the founding executive director for the past 21 years.

When they began the group, young people weren’t making baskets. With effort, they turned this around. “We taught a new generation to weave,” said Secord. Now, four generations are involved in making baskets. “I love this intergenerational aspect,” she said. Additionally, it functions as a positive social activity for communities, as a counterpoint to social ills. “We’ve been able to offer an alternative,” said Secord.

The fruits of their efforts can be particularly seen in the example of Passamaquoddy basketmaker Jeremy Frey, a member of the group who notably won Best of Show in 2011 at both the Heard Museum Guild Indian Fair & Market and the Santa Fe Indian Market. “Never did we imagine that a young man with his remarkable skills and artistry would come along!” remarked Secord.

MIBA was also successful in increasing the value of Maine basketry. During the 1950s, with a lack of options in rural areas, many people sought opportunities elsewhere, reducing the numbers of potential basketmakers. A number of Secord’s mother’s generation left their communities to go to nursing school in Portland, Maine. “Basketry making was becoming associated with poverty,” noted Secord. Baskets continued to be sold very cheaply through the years. “We were able to turn around the low price.” The prices of baskets went from $30 to $300, and even $3,000 in some cases during the past 20 years. Basketry now serves as a good source of income for tribal members, which also provides additional incentive for its preservation.

In May, Theresa retired from her position as executive director of the Maine Indian Basketmakers Alliance. She continues to focus on her artwork and works as a consultant, training artists in professional and business-development areas.