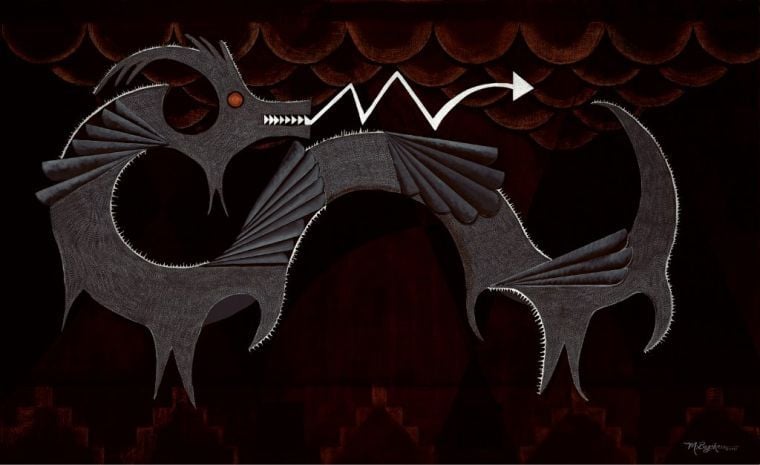 Painting by Margarete Bagshaw, Beckoning of the Plumed Serpent. 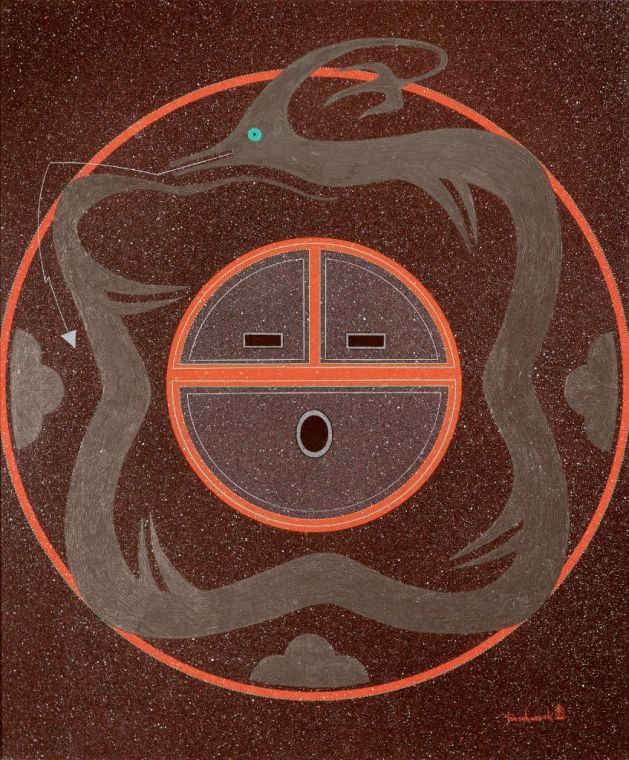 Painting by Margarete Bagshaw, Beckoning of the Plumed Serpent.

The evil spirit of drought had come and stayed too long! All of the  people, the animals, the birds and the plants were in abject misery! As the days came and passed, the birds sang only sad songs; the plants drooped lower and lower; the animals walked slower and the people were haunted with despair! The earth’s rhythm was out of step!

The ancient people were ready to abandon the homes they had lived in all of their lives. The very old and sick ones were to stay but they were brave and were ready to accept their fate.

As a farewell to their ancestors, whose spirits were ever-present, the people performed a special ceremonial. Unusual preparation was required for this particular ceremony. They offered prayer sticks covered abundantly with every available bird feather. They were sprinkled heavily with sacred corn meal, and they endured great physical suffering to please the Great Spirit. When they finished their rituals and waited for answer, they gazed at the sky with prayers and hope in their hearts.

On a rainy, mist-veiled morning, just a few weeks before spring’s official arrival, a family of blue and grey serpentine clouds gathers overhead. Moving toward the high cliffs to the west of the Tewa villages, along the now dampened banks of the Rio Grande, where yucca blooms and eagles fly, it swirls and tosses about in the cool air. The shapes move into and out of and over and under each other, becoming more defined as they carry themselves across the sky. Reaching the edge of the Village Where Cottonwood Trees Grow, their movements slow and they descend just enough to touch the tops of the tallest trees.

As the first drum sounds and the dancers emerge from the kiva in one long, slender line, a single beam of sunlight escapes from within the moving serpent shapes and brushes damp shadows onto the fine, sandy earth and across the smoothness of the kiva walls. The air sparkles and glistens all around and breezes from each direction push through the shadows and float toward the cactus-covered, obsidian-colored mesa just beyond the village, where the Rio Grande of Northern New Mexico swims fast and deep, and bright red snakes wind through the tall grasses of its banks in summer.

The dancers align themselves from south to north. Moving in perfect time with each other, every moccasin touching the earth and pushing back away from it in unison, they become one continuous collective motion, their speed and direction of step dictated by the drums, and their accompanying songs sung in voices that resonate through the morning and out into the first moments of the just-arriving day. The men’s kilts are adorned with horned serpent figures that twist and twine over the soft woolen monk’s cloth with each dancer’s movements. The gentle, writhing undulations of the serpents become almost three-dimensional within these movements as they swim from side to side over the soft ocean of textile beneath them.

This is the Bow and Arrow dance: Avanyu is here

For more than a millennium, the horned or plumed serpent, known in the Tewa Pueblo language as Avanyu, has occupied a place of great importance within the culture and cosmology of the Puebloan Indians of the American Southwest. Symbolic both of earthly and supernatural phenomena — clouds, rain, lightning, bodies of water and the fusion of the terrestrial to the heavenly — its likeness has snaked itself across the steep desert rock faces and sheer cliff overhangs over thousands of miles of the temperamental desert terrain within the vast radius of what now constitutes the territories of Mexico, New Mexico, Arizona and Colorado.

Earliest representations of the iconic serpent figure appear on the black-and-white painted surfaces of classic Mimbres pottery (A.D. 1000-1150), the precursor to the fine Pueblo clay work of today. Traveling north, with many intermittent visitations along the way, primarily in the Casas Grandes and Jornada Mogollon districts, where it was often included in the decorative motifs of ceramic works and kiva paintings dating back to between 1200 and 1450, it eventually wound its way into the upper Rio Grande regions of the Tewa and Tiwa tribes around 1325. There it retained its significance as a symbol of the various properties of water and, thus, as a sustainer of life itself. Often depicted wearing a neckband of a stylized shell design, further implicating its qualities as a water deity, the horned or plumed serpent is also used as a metaphorical reference to lightning, which bolts from its open mouth in an attempt to influence the celestial guardians to coax rain from the sky.

Archaeologist Polly Schaafsma, Ph.D., is well acquainted with Avanyu, having dedicated many years of study to its mysterious and powerful presence throughout the Southwest. In an essay “Quetzalcoatl and the Horned and Feathered Serpent of the Southwest” (found in the book The Road To Aztlan: Art From A Mythic Homeland by Virginia M. Fields and Victor Zamudio-Taylor, 2001), she notes Avanyu’s “bewilderingly complex personality,” which, much like its Mexican counterpart, Quetzalcoatl, “is multifaceted and ambiguous, cosmic in scope, its roles in myth and ritual involving the unpredictable — endings and beginnings, change, transition, and transformation.”

Dr. Schaafsma writes, “The horned serpent continues to be revered as an important deity among the Pueblos and is known by various names among the different linguistic groups, including Kolowisi (Zuni), Paaloloqangw (Hopi), and Awanyu (Tewa). … The serpent may be associated with the four (or six) directions, the colors of which the snakes also assume. Nevertheless, the Pueblo horned serpent is primarily a water serpent, an ambiguous entity both feared and respected. … His home is in springs, ponds, rivers, and ultimately the oceans, all believed to be connected under the earth’s surface, and … may cause torrential rains and floods.”

Today Avanyu continues to wind around the smooth, hand-polished surfaces of the black, red and polychrome vessels made by some of Native America’s pre-eminent potters, including Judy Tafoya and Sharon Garcia of Santa Clara Pueblo and Russell Sanchez of San Ildefonso Pueblo; and across the canvases of its masters of two-dimensional works, including Hopi-Tewa artist Dan Namingha, and third-generation Tewa painter Margarete Bagshaw (Santa Clara Pueblo), who has engaged the Avanyu image in her dynamic and energetic large-scale paintings, as did her mother and grandmother, painter and printmaker Helen Hardin and the great painter Pablita Velarde, respectively, in their acrylics, caseins, watercolors and lithographs. All of these artists cite the inherent spiritual and cosmic references contained in the Avanyu form.

Though the iconic symbol of the plumed or horned serpent is still used extensively among contemporary Pueblo artists, the secrets of Avanyu remain closely guarded; many sources are reluctant to offer dialogue on the subject of Avanyu, and therefore, the discourse is limited.

Painter Margarete Bagshaw notes, “I have grown up seeing the Avanyu wrapped around the pots made by my aunt Legoria Tafoya, as well as other Santa Clara potters. The Avanyu is who I pray to, by painting, when our mountains have fire caused by severe drought. It appears in cloud formations, lightning, rivers and wind. I was taught by my grandma that it will either bless us with sustenance or punish us with flood or drought, for the way we as a society behave. The most important thing, she said, is to always show great respect when Avanyu appears. Be humble and hold it in high regard.”

When the final verse is sung and the last drumbeat marks the end of the dance, the single line of dancers disappears back into the silence of the kiva. The bows and arrows and kilts are put back in their proper places, where they will rest until Avanyu returns. The gathering of serpent-shaped clouds ascends again, now rising far above the treetops and wrapping the beam of sunlight inside itself, then drifting onward toward the distant canyons to the west, where wild roses grow and dragonflies flutter in springtime, toward formations in the landscape that suggest Avanyu’s very origin.

It moves quickly through the thin, cool air, then dips down into the horizon and travels far beyond view. Avanyu has gone home. For now.

Their sign came one bright night amid great excitement and fear! For from the sky fell a comet of fire, roaring, writing and winding as it fell to earth! The earth trembled, for Ava-yun-ne had found the Evil Spirit of drought. The combat was victorious for Ava-yun-ne! As he disappeared back to Si-pa-pu, the voice of Thunder sang in a loud voice, followed by the steady rhythm of raindrops. The rain continued until the arroyos were filled and became rivers, which flowed in the same winding pattern of the Ava-yun-ne.

This is why all rivers now twist, turn and wind as they flow over the face of the earth.

RoseMary Diaz (Tewa) is a freelance feature writer and an award-winning and anthologized poet who studied literature at the Institute of American Indian Arts, Naropa University and the University of California at Santa Cruz. RoseMary spent much of her childhood at her family’s home in Santa Clara Pueblo, where she participated in many traditional dances. She resides in Santa Fe.