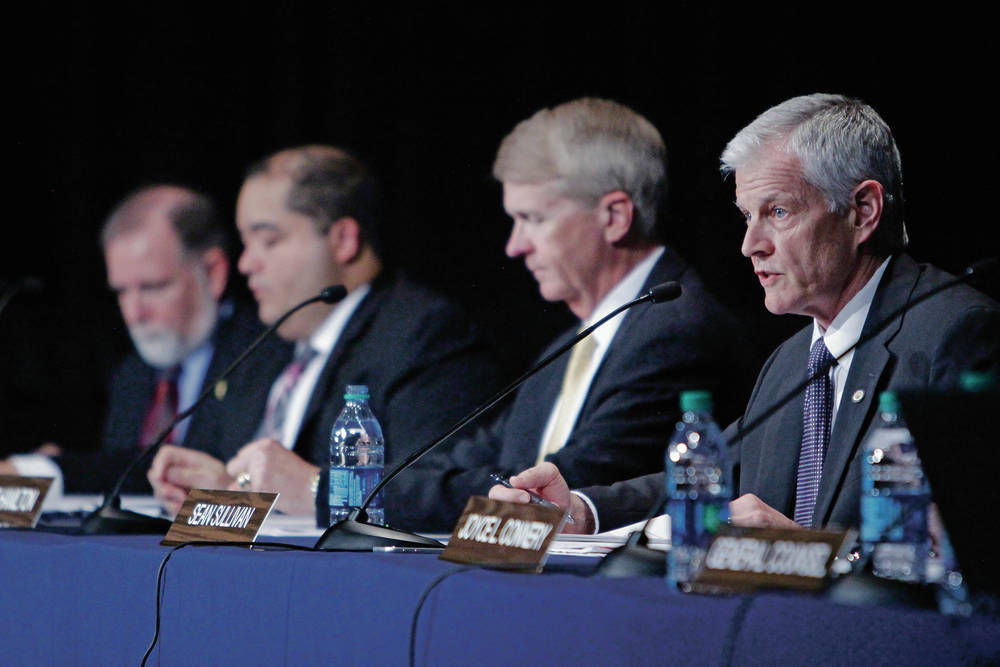 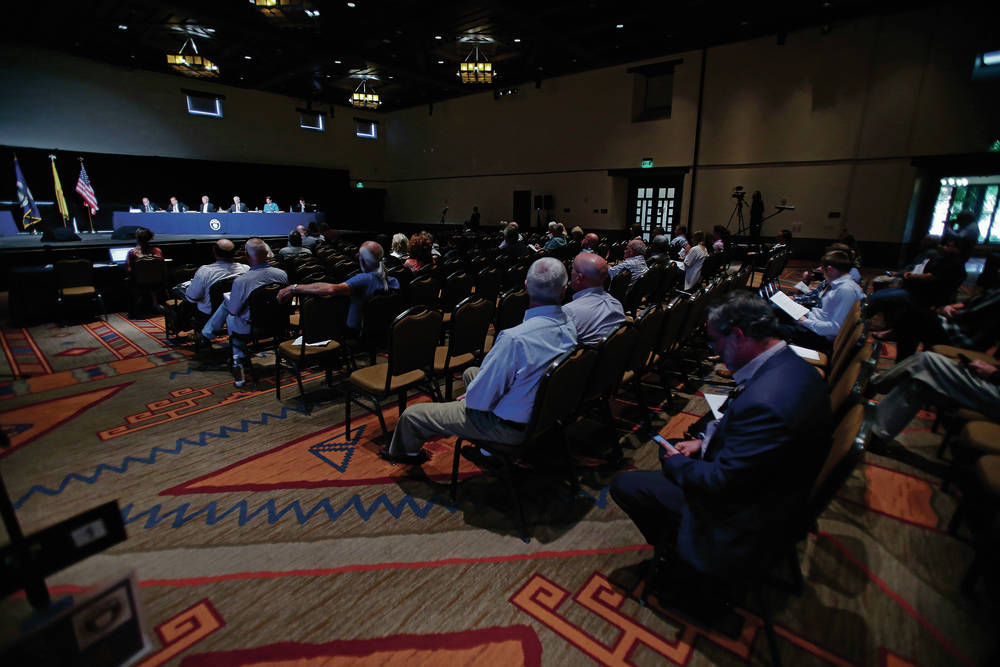 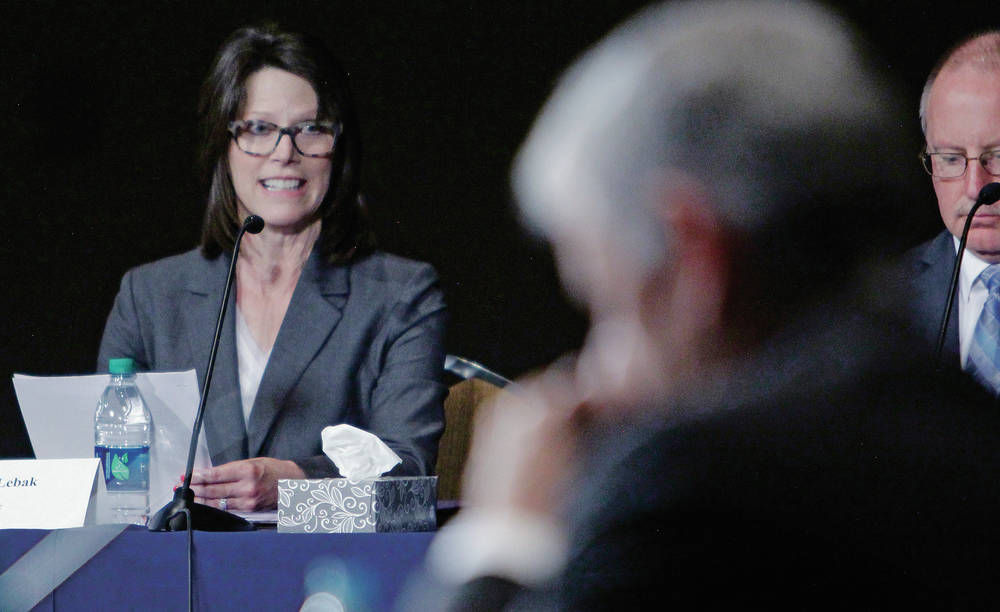 Los Alamos National Laboratory officials told a federal advisory board that they expect to be working with unprecedented levels of highly radioactive plutonium in coming years, engaging in what was described during a Wednesday night hearing in Santa Fe as a “learning curve.”

The Defense Nuclear Facilities Safety Board, an independent advisory board for the Department of Energy, was in Santa Fe to question officials from the lab and the National Nuclear Security Administration about the safety of ongoing plutonium work at Los Alamos, given aging infrastructure, a history of safety problems and a consistent backlog of unaddressed repairs.

Since 1978, the lab’s plutonium facility, PF-4, has been used to handle highly radioactive materials for maintaining the country’s nuclear weapons stockpile and other national security missions.

Future operations of the facility are at issue as the Energy Department looks to ramp up production of plutonium pits — the grapefruit-sized atomic bomb cores that trigger nuclear weapons. The lab produced two test pits last year but the Energy Department wants to see more than 10 pits per year produced by 2022 and as many as 80 pits produced annually by 2030.

In response to questions from the board, James McConnell, an associate administrator for the NNSA, said increasing plutonium pit production “would require Los Alamos and the plutonium facility to engage in pit production at a level they have not done before, at a level that the country has not done in some time. So there is a learning curve that we are all going to have to go through.”

Safety concerns by federal oversight agencies date back more than a decade. In 2013, fears that these issues could lead to a nuclear accident caused a shutdown of the facility for more than a year.

The safety board on Wednesday pressed lab representatives and federal officials about what improvements had been made; ongoing safety issues related to the possibility of an earthquake; how much nuclear material would be handled by the lab as part of the expansion of pit production; and where the growing collection of waste from pit production will end up.

Kim Lebak, field office manager at Los Alamos for the NNSA, said significant progress has been made in correcting issues and addressing infrastructure challenges. She said infrastructure projects for the coming fiscal year are fully funded.

Federal standards say nuclear facilities must be able to withstand a seismic event. For Los Alamos, the scenario posed is an earthquake that results in several internal fires at the plutonium facility. Lab officials said the probability of an earthquake at the site is once in 10,000 years.

“Nevertheless, it is the [federal] standard,” said board chairman Sean Sullivan. “A lot of smart people still get fooled on occasion by Mother Nature.” He referred to 2011 tsunami that overwhelmed the Japanese nuclear power plant at Fukushima, “which was more than what the design basis had anticipated.”

In the event of an earthquake, experts say, the Los Alamos plutonium facility’s ventilation system likely would fail, there would be problems with the building’s water supply, and several of the structures that hold up glove boxes used to manipulate and sometimes melt plutonium would fail.

Members of nuclear watchdog groups, residents of nearby pueblo and Los Alamos County, as well as Santa Fe County Commissioner Anna Hansen provided public comment at the end of the meeting, urging the board to hold the lab accountable and expressing concerns about increased pit production.

“There is an entire economy built over the exploitation of our people,” said Marisa Narnja, 25, who identified herself as a youth representative of Communities for Clean Water. “Our air quality and food has been contaminated. My greatest fear with regard to this whole issue is that if the lab isn’t held accountable, that it will expand.”

The lab earlier this spring asked to expand its hazardous waste permit from the New Mexico Environment Department to allow it to store more transuranic waste — such as tools and soil contaminated with plutonium — at Technical Area 55, where PF-4 is located.

Allison Majure, a spokeswoman for the Environment Department, confirmed Wednesday that department approved the request May 30.

The Defense Nuclear Facilities Safety Board’s five members were appointed by former President Barack Obama and confirmed by Congress. The panel is meant to “identify the nature and consequences of potential threats to public health and safety” as a result of the Department of Energy’s nuclear missions.

Among issues raised Wednesday was a poor evaluations from the Department of Energy, which reported to the board in February that Los Alamos was the only national laboratory to receive a failing grade for its nuclear criticality safety program, a program designed to prevent a nuclear accident and radiological release during work related to nuclear weapons development.

Then in April, during Earth Day cleanup activities, a fire broke out on the ground floor of PF-4. Workers opened an unlabeled container they believed held powered graphite but in fact contained lanthanum nickel. The materials started to warm, then self-combusted, causing a small fire. One worker suffered second-degree burns.

No observable hazardous or radioactive materials were released into the environment as a result of the fire, officials said. But images of the event show the metal canister in which the fire occurred was significantly marred, melted down and cracked into a jagged, brittle frame.