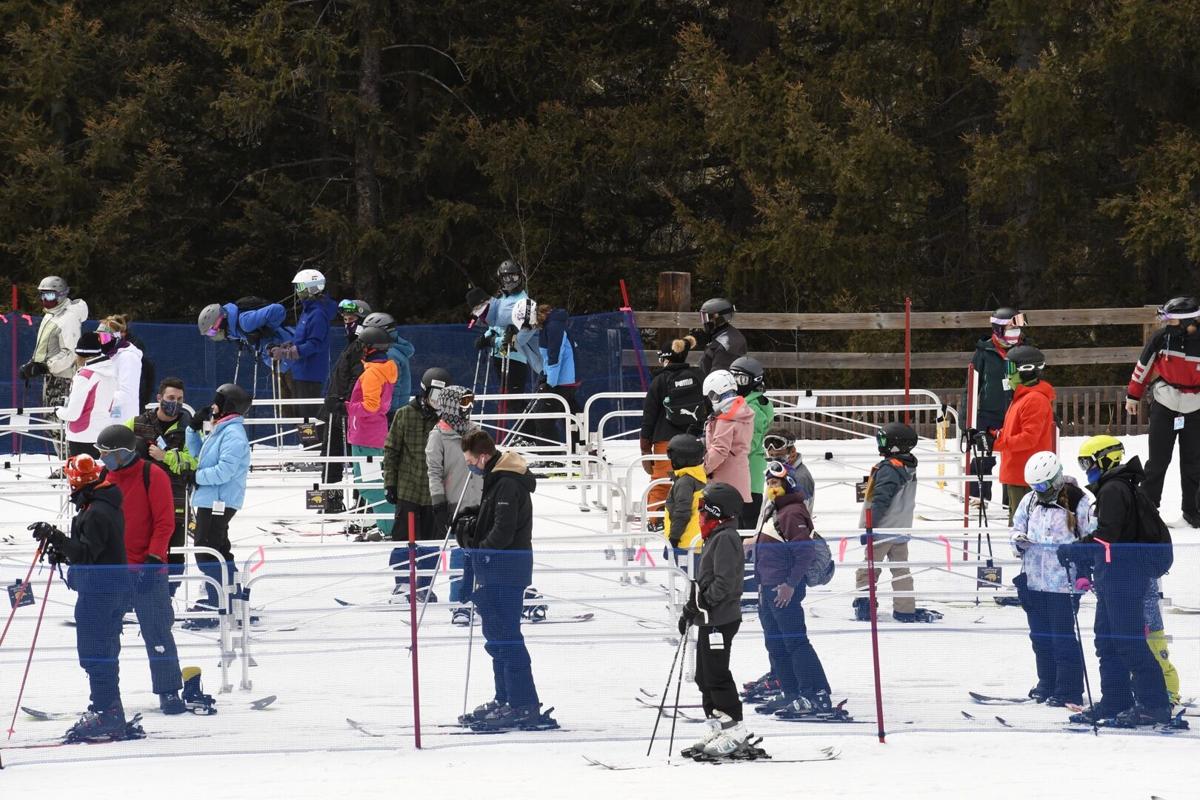 Ski Santa Fe has had to significantly reduce its capacity because of COVID-19 restrictions, although many skiers and snowboarders were able to enjoy President's Day weekend on the slopes. 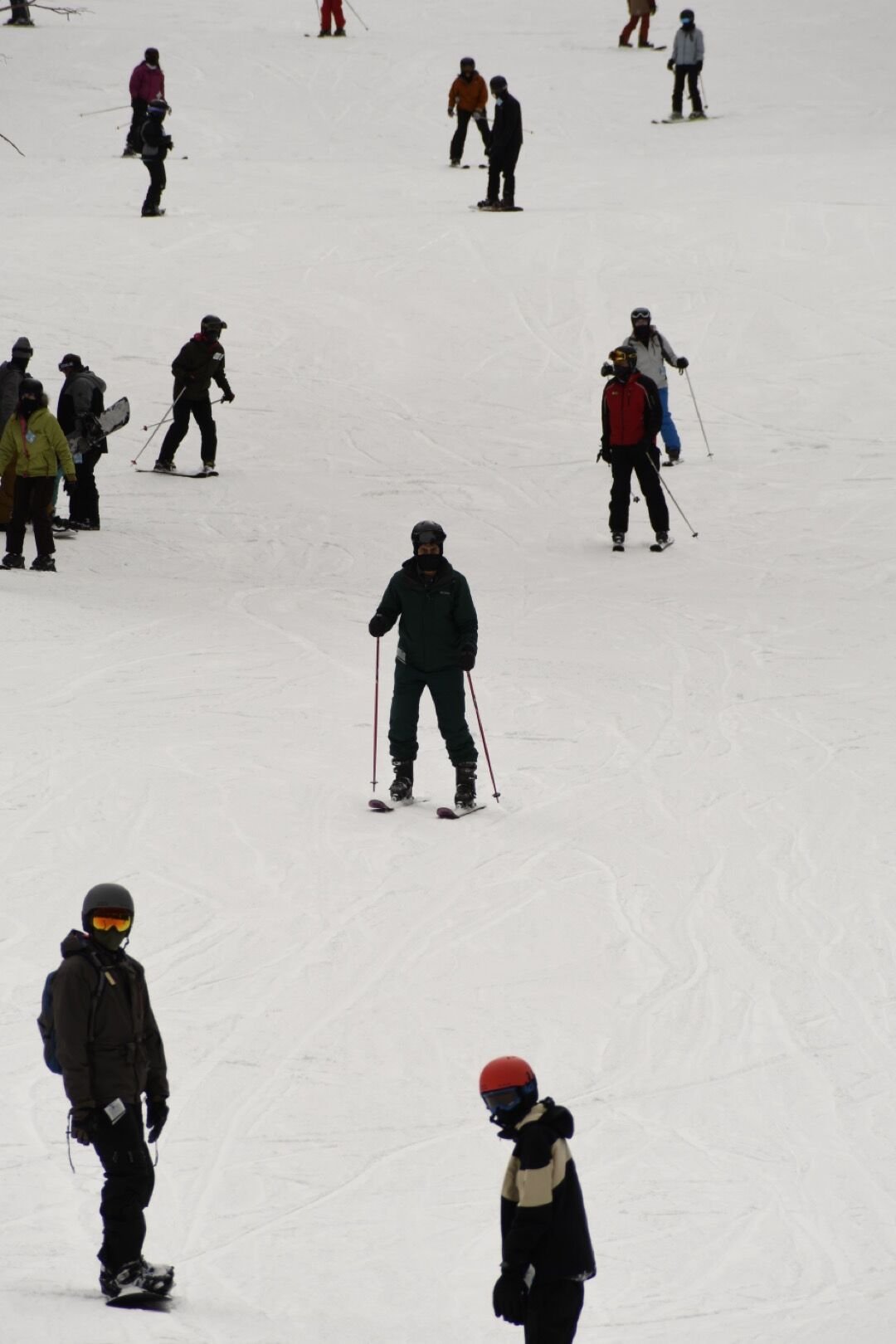 Because a lot of people opt to wear a balaclava mask while skiing or snowboarding, mandated mask wearing doesn't look as visually jarring on the slopes as it does at school or in the grocery store. 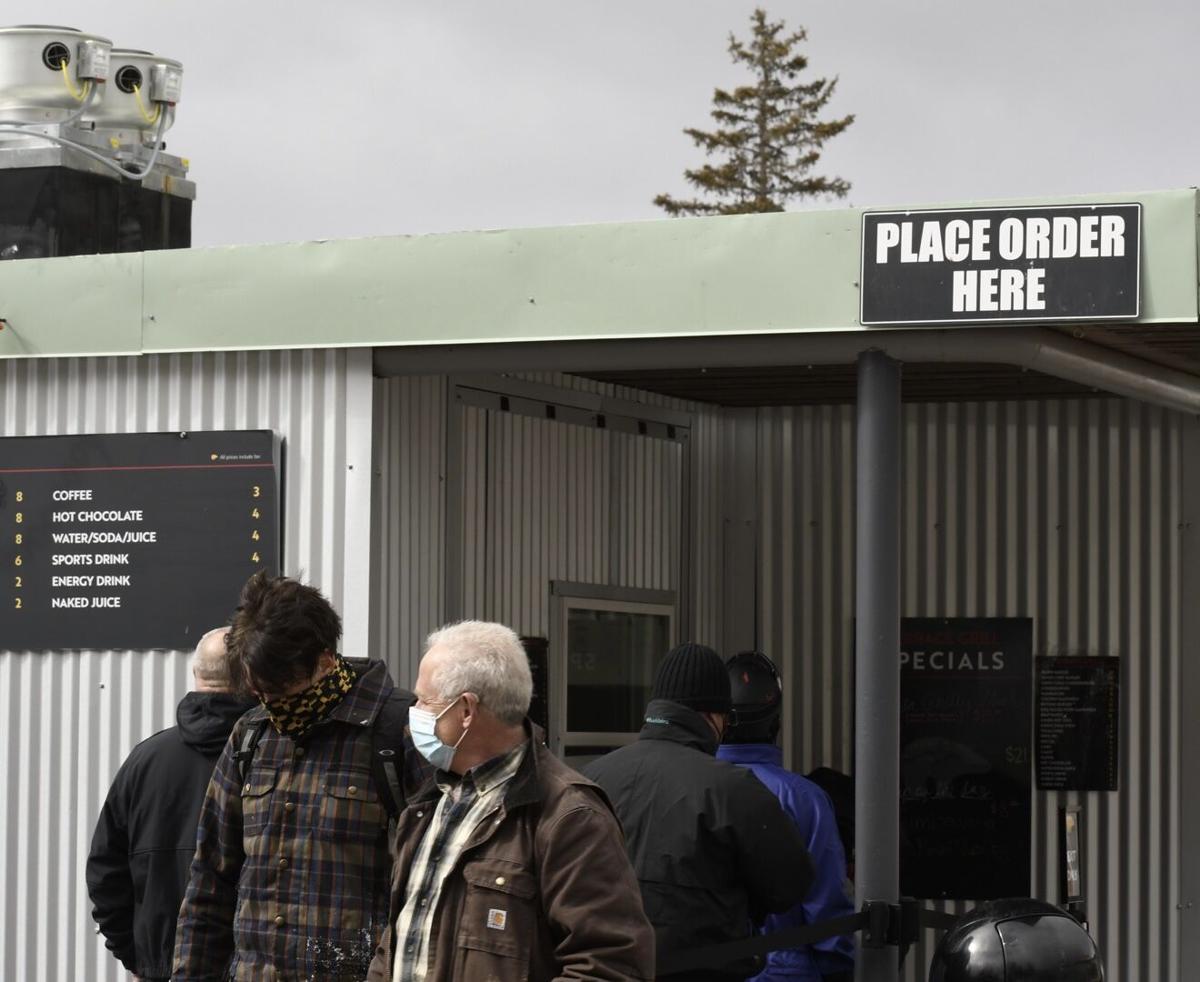 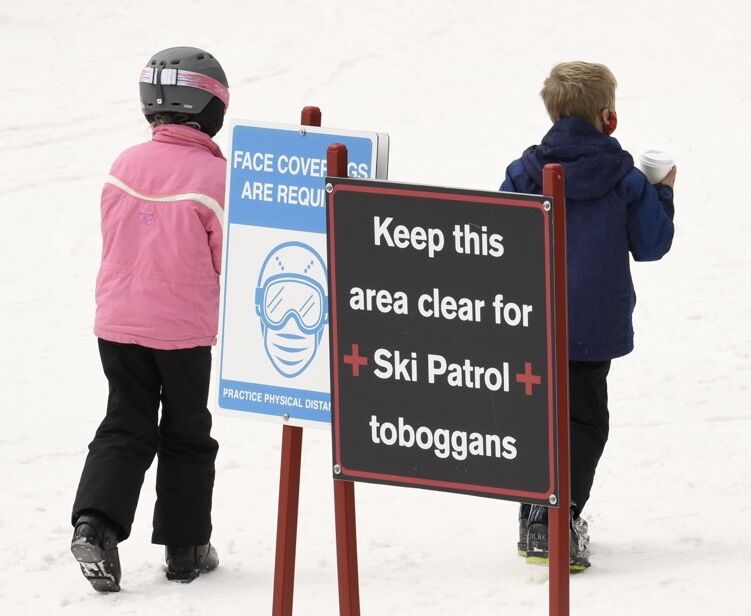 Two kids carry steaming cups of hot chocolate and rush past a new sign mandating the use of face masks. This is one of Ski Santa Fe's efforts at keeping this year's ski season COVID-19 safe.

Ski Santa Fe has had to significantly reduce its capacity because of COVID-19 restrictions, although many skiers and snowboarders were able to enjoy President's Day weekend on the slopes.

Because a lot of people opt to wear a balaclava mask while skiing or snowboarding, mandated mask wearing doesn't look as visually jarring on the slopes as it does at school or in the grocery store.

Two kids carry steaming cups of hot chocolate and rush past a new sign mandating the use of face masks. This is one of Ski Santa Fe's efforts at keeping this year's ski season COVID-19 safe.

The 2020-21 ski season was filled with uncertainties from the moment it was announced. Initially, it was unclear whether there was even going to be a ski season, with a spike in coronavirus cases delaying Ski Santa Fe from opening and an alarmingly little amount of snow.

Next came the issue of season passes with the controversy surrounding Ski Santa Fe’s One Pass system, as the limited supply of available passes sold out quickly, leaving many locals without a pass, causing many teens to grumble as they were unable to purchase the typically easy-to-come-by passes. Ski areas across the country implemented a reservation system in order to hold a spot to go on the mountain, limiting local options to Santa Fe and Taos.

“I was lucky to get a pass, that stuff can get expensive.”

Pass and ticket reservations mean there can only be a specific number of people who can be on the mountain at any time, which is designed limits the ways in which people can go up in large numbers and prevent the overcrowding that the ski area experiences over spring break.

Marlow said the systems used by ski areas have issues, but he isn’t sure how to improve them, apart from making it so areas benefit locals more. Many license plates at parking lots on the mountain are from out of state, a factor that is irritating to locals who have issues finding a reservation.

“I might be a bit more exclusive, but I would have made sure that the season passes and tickets were only sold to people who have Santa Fe or Albuquerque ZIP codes. That or give them the preference,” Marlow said.

Despite the pandemic, Ski Santa Fe looks surprisingly similar to past seasons. All the lifts are operating and there are groups of discombobulated people milling around the base of the mountain. People are wearing their ski masks as they always have. However, there are some small differences that change the experience.

Buildings are largely closed, with access limited to the facilities and the shops. Do not expect to get a meal inside or sit around warming up indoors. Totemoffs, the bar and grill halfway up the mountain, and the grill at the base are still operational, but social-distancing measures apply — though many people are still concerned about the efficacy of precautions being taken.

“There are a lot of people on the mountain who don’t follow the 6 feet distancing and do not have their mask all the way over their face,” said Cyrus Curtis, a snowboarder and a junior at Santa Fe High.

Curtis believes some of the social fulfillment that comes with skiing and snowboarding for local students has somewhat diminished, as people have difficulty justifying the need to go skiing because of the fear of COVID-19 as well as the ski pass and ticket issues. It doesn’t help that until recently, there wasn’t much snow on the mountain.

“The scarcity of passes and lift tickets makes it feel like a lot more of a hassle to go up to the mountain,” said Curtis, who added the issue of distancing makes it significantly harder to meet up with friends or justify going at all.

Ski Santa Fe in particular asks for people who drive up together to ride the lift together, eliminating the typical practice of meeting up with friends at the lift to converse. However, Curtis said he will continue to go up despite the dangers of people failing to abide by guidelines and the hassles of actually getting onto the mountain. It is an activity he believes is necessary and it makes him happy.

Many teens feel the same: To be able to ski or snowboard during the pandemic has been a great relief — to finally do something that feels somewhat normal. With the convenience of a mountain being close by, skiing and snowboarding is the ideal pandemic activity for local teenagers.

“Other than making reservations for the day and more social distancing, I haven’t come across any new inconveniences on the mountain,” said Stella Bordner, a junior at The MASTERS Program, a charter school at Santa Fe Community College.

With the mountain offering an opportunity to leave the house and experience nature, local teenagers have been able to enjoy the freedom of activity it offers. She does not think skiing is that risky, as people are outside and faces are usually always covered. “The only thing that I really miss is skiing with a big group of friends. But hopefully, that will come in due time.”

Bordner is hopeful the rules and restrictions on the ski area will not last later in the season or next year as the coronavirus threat decreases.

“There is a huge ski community, and the more people the better,” she said.

Ben Timm is a senior at Cottonwood Classical Preparatory School. Contact him at bentigertimm@gmail.com.