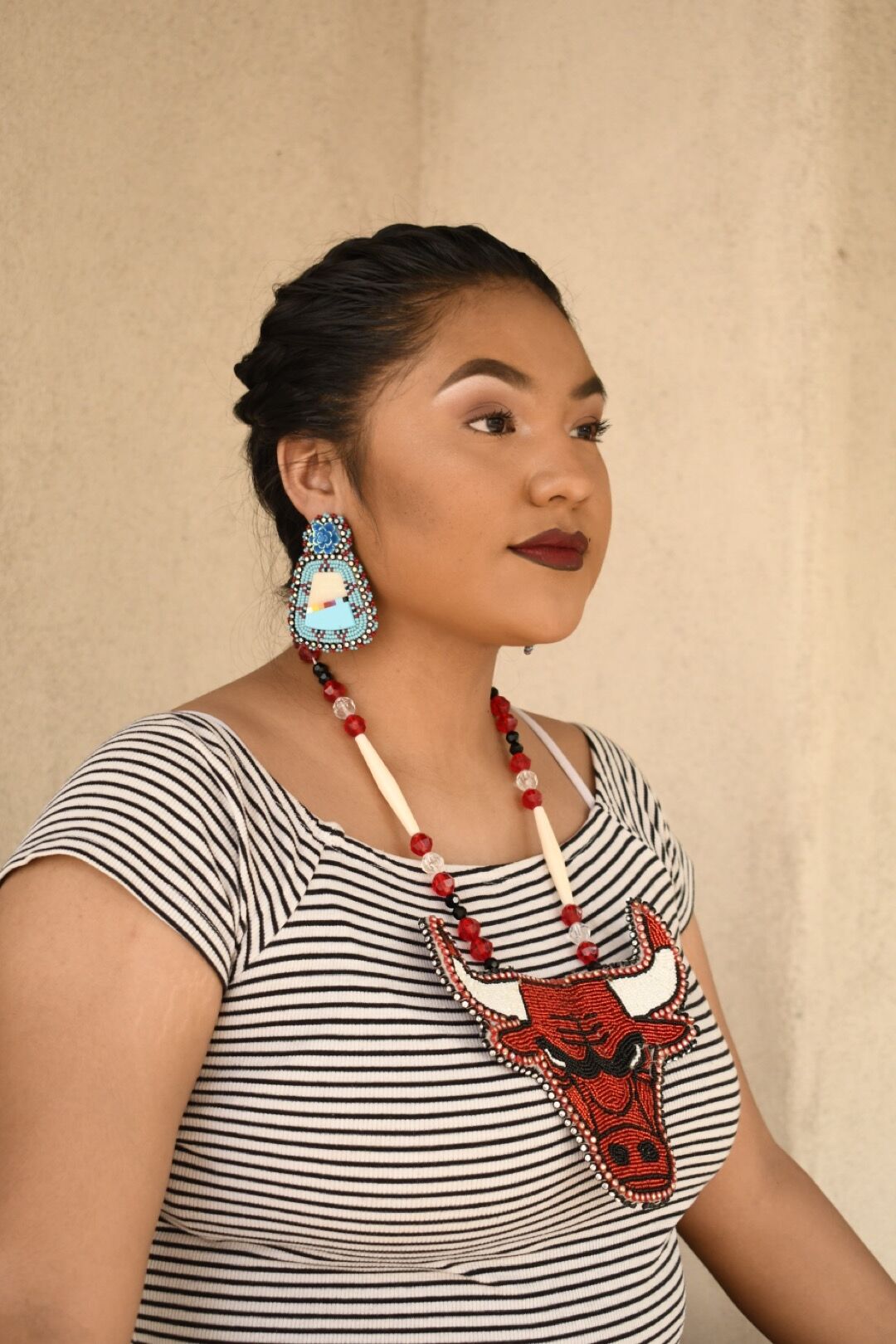 Yang Toledo, a freshman at Fort Lewis College, dons a medallion made by her mother. 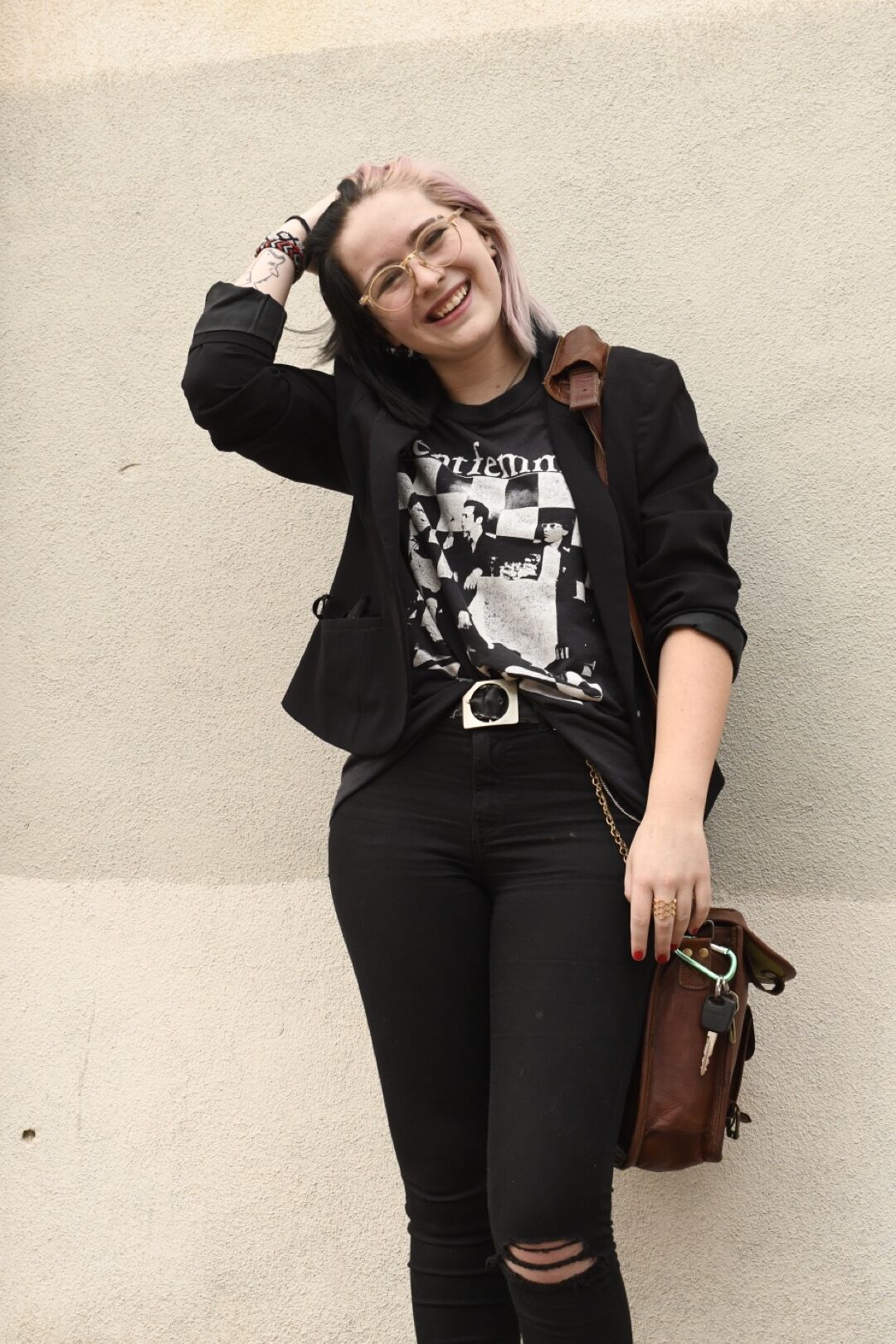 Lulu Sulich, a recent graduate of Santa Fe High School, leans against a wall in a band tee, clutching her briefcase. 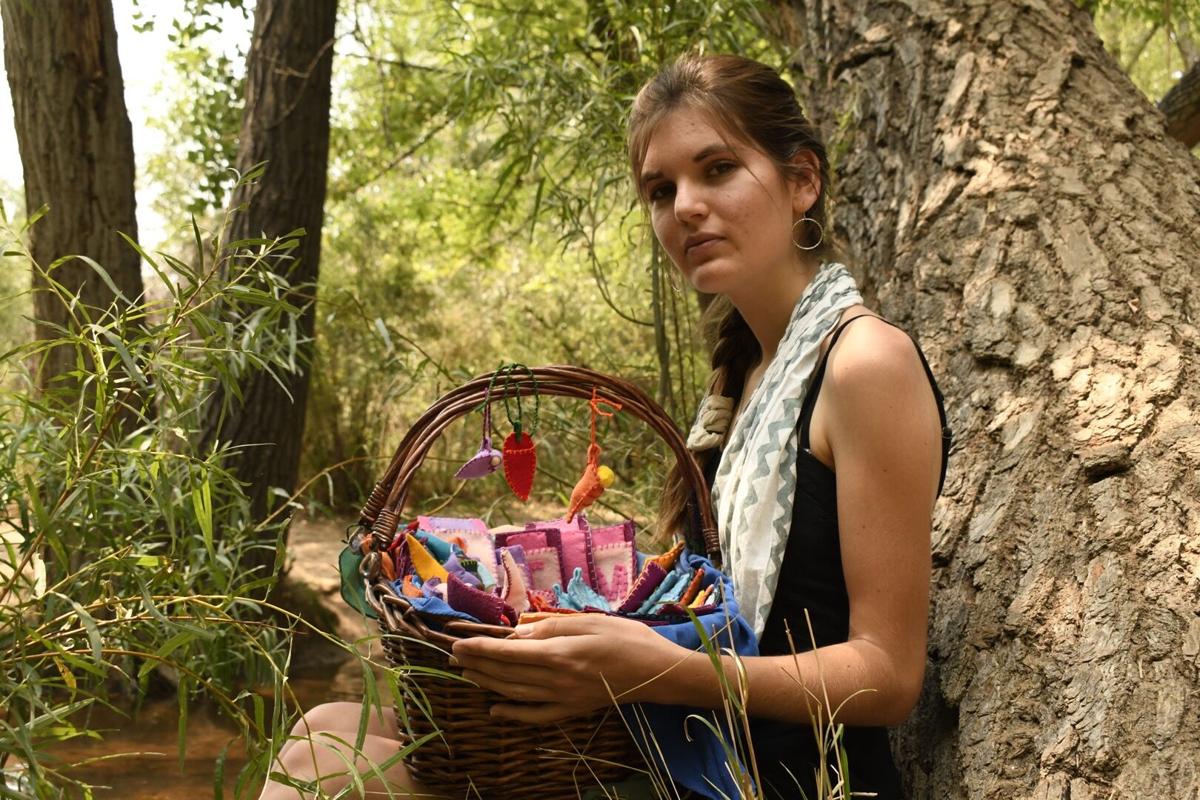 Indie Russell, a senior at the Santa Fe Waldorf School, poses with a basket of felt products she sells on Etsy.

Yang Toledo, a freshman at Fort Lewis College, dons a medallion made by her mother.

Lulu Sulich, a recent graduate of Santa Fe High School, leans against a wall in a band tee, clutching her briefcase.

Indie Russell, a senior at the Santa Fe Waldorf School, poses with a basket of felt products she sells on Etsy.

Yang Toledo believes art is activism. Through printing one-of-a-kind designs, she wants to help raise awareness on issues that matter most to her.

Toledo, a recent graduate of New Mexico School for the Arts, is now a first-generation college student, determined to not only find success in academia but to find her voice as an artist.

Toledo says she hates the idea of hiding art away in galleries. By creating wearable items, she says, she hopes the value of her work takes a larger scale — one day, she’d like to open a store in Santa Fe and maybe even sell her goods internationally.

Each collection focuses on a prevalent issue within Indigenous communities. The three collections thus far are: Save the Bees, Protect Our Women and Protect Mother Earth.

Protect Our Women aims to bring awareness to Indigenous women and children who are murdered at disproportionate rates across the country. The design features a woman’s face, meant to serve as a symbol “for all of the countless women who are Indigenous that have been raped and murdered,” Toledo says.

Save The Bees is meant “to bring awareness to our insect relatives who help our world survive through pollination,” the website says. And Protect Mother Earth hopes to shed light on environmental crises on Native lands, specifically the Navajo Nation.

Each item purchased is made to order, Toledo says, noting this is to help alleviate the lacking sustainability of fast fashion. Indigenous Icon Company is also unique in that it gives part of its profits back to the local community — the same community Toledo says she hopes to empower through her work.

The idea is to “bring awareness to what is happening on Indigenous reservations right now. … We want to show people that they have a voice and that they matter,” she says.

Toledo, like so many entrepreneurs, admits that running a business on her own hasn’t always been easy.

“I built my company from scratch. I got no loans, only the help from my family,” she says, adding it’s been especially hard amid the pandemic when “people don’t have the money to buy merchandise from us [because] they have other expenses to pay.”

Fortunately, she says, all of her efforts have paid off. The best part, she says, is that she’s helped play a role in spreading a positive message about what it means to be Native.

“I grew up being told that being Indigenous was a shameful thing, when in reality, it is a very beautiful and amazing thing one should be proud of,” she says. “Our people are very resilient.”

What started out as a fun hobby for 18-year-old Lulu Sulich is now a thriving small business.

Sulich is the founder, owner and artist of Bee Kind Art, where she mostly sells musician-inspired merchandise in the form of art prints and hand-painted band T-shirts. Using online platforms like Etsy and Instagram (@_bee_kindart), Sulich markets her graphic designs to buyers who love music and have an eye for design. Some examples of her work include Harry Styles-themed posters with lyrics from his latest album, and 5 Seconds of Summer-inspired coveralls.

Sulich says she’s always loved painting, especially on her own clothes. Back in high school, she’d almost always get compliments when she’d wear her designs out in public, she says, so she never worried whether her items would sell.

She admits it wasn’t her love of art, music or fashion that inspired her to launch Bee Kind Art. “I honestly started my business because I needed cash,” she says.

Since launching her shop during her freshman year of high school in 2016, however, the entrepreneurial hustle has become her greatest passion.

“I found a kind of niche where the stuff actually sells along with the fact that I genuinely enjoy making things for other people and having my art kinda out there,” she says.

Buyers seem to enjoy the work just as much as she does. Her Etsy shop currently has more than 600 “admirers,” and she’s made more than 450 sales. Sulich says she’s shipped orders internationally, including to Ireland, Australia and Spain.

The most rewarding moment thus far, she says, was when the band 5 Seconds of Summer retweeted one of her designs in April.

Still, there are challenges in launching a company.

For one, “you have to put lots of money in before you can get any profit out of it,” she says.

Additionally, she’s dealt with some outlets stealing her designs and setting red tape around copyrights.

Yet, Sulich sees every obstacle as a learning lesson and appreciates every step of the journey.

“I have truly found my passion and don’t want to let it go,” she says.

Russell grew up going to a school in central California, where she says crafting was a high priority and inspired her to continue creative pursuits outside of the classroom. When she moved to Santa Fe in 2017 and attended the Santa Fe Waldorf School’s craft fair, she noticed it was lacking the same artistry.

“I wanted to promote [that same type of creativity] within the school so I started crafting and I decided to open a stand at the school fair,” she says.

Her stand’s success at the fair encouraged Russell to start a small business of her own. So, during Christmas break in 2019, she launched her online store with the help of her parents and her school.

“It was definitely hard finding ways to advertise my products — you know, getting the word out wasn’t easy and the financial stuff at the beginning was difficult,” she says. “I guess you could say it had a rocky start.”

But it wasn’t long before she started selling items and gaining international attention. Amid the ongoing coronavirus pandemic, she has even started making face masks, which she also sells on her Etsy page.

The masks, she says, have been “wildly successful” thus far. She says she’s been getting customers “from all over the place,” including Mexico, Australia and Canada.

Even though Russell currently only sells her products online, she says she’d like to soon open a booth at a recycled art fashion show in November and at the farmers market in the Railyard.

Russell says she hopes to continue the business, which she says is a reflection of herself.

“My work carries the values and morals that I hold with me,” she says.

Valeria Ramirez is a sophomore at Santa Fe High. Contact her at ramirezvaleria2105@gmail.com.

The ETSY platform is great for us marketers and entrepreneurs! I have had a store in ETSY for 6 years and I am an ETSY SEO expert, if someone is interested in creating a store there professionally, here is my FIVERR link.

You can read all my reviews and comments. ⭐️⭐️⭐️⭐️⭐️