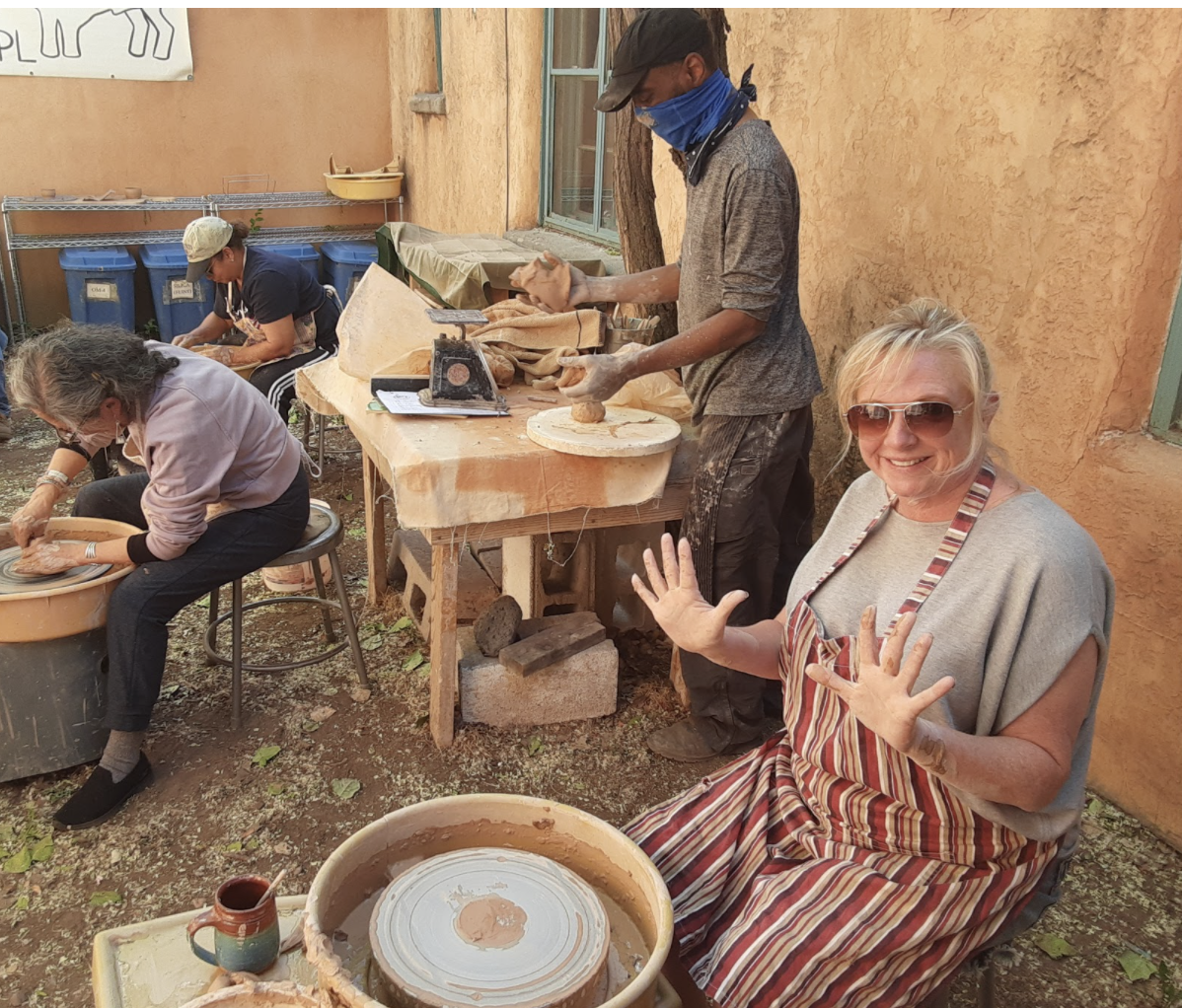 A student at Paseo Pottery shows off the clay on her hands after using the potter’s wheel last month. Brian Crow of St. Louis works on his piece last month at Paseo Pottery. Traveling with his husband and friends, he said he decided to take the pottery class to try something new while in Santa Fe. 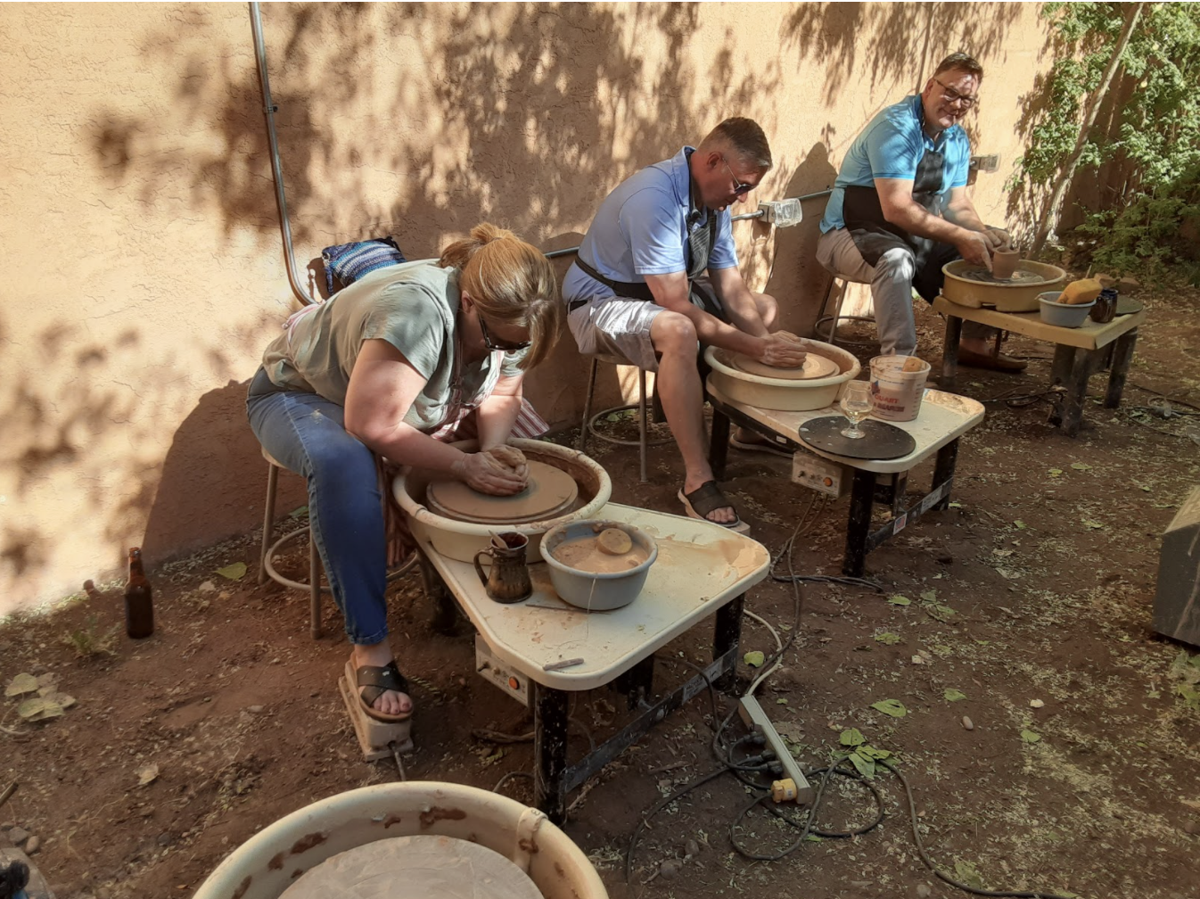 Students learn to use a potter's wheel. 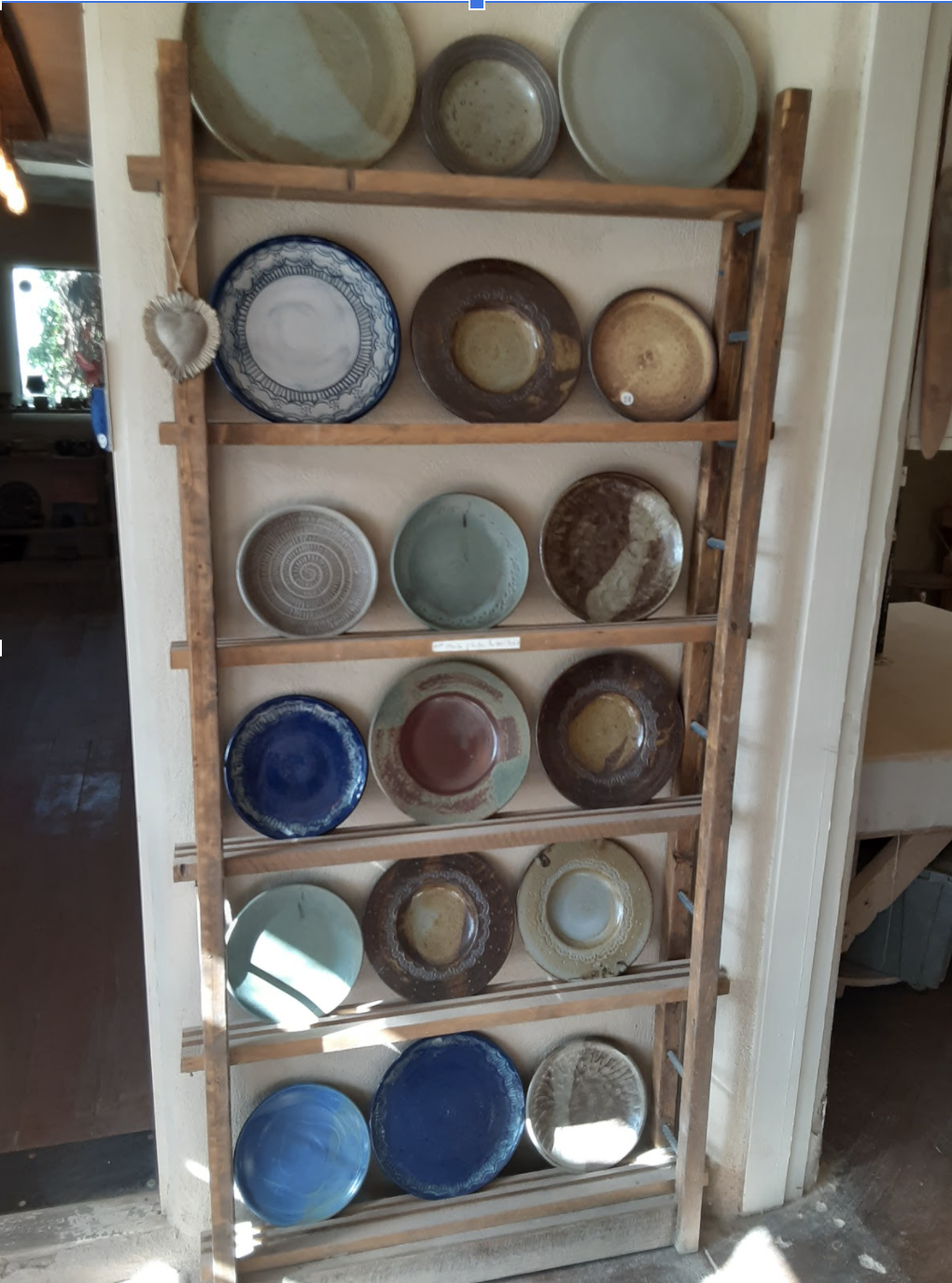 Plates on display at Paseo Pottery.

A student at Paseo Pottery shows off the clay on her hands after using the potter’s wheel last month.

Brian Crow of St. Louis works on his piece last month at Paseo Pottery. Traveling with his husband and friends, he said he decided to take the pottery class to try something new while in Santa Fe.

Students learn to use a potter's wheel.

Plates on display at Paseo Pottery.

Arts and culture are integral elements of tourism in Santa Fe. From the Pueblo-style architecture to the countless art galleries, Santa Fe is constantly filled with people from different parts of the world, coming together to learn about the culture of this unique city.

One popular and historic way culture takes shape is in the form of ceramics. What better way to learn than experiencing it at Paseo Pottery, a place that puts our creative knowledge to the test?

Inside Paseo Pottery’s rustic adobe building at 1424 Paseo de Peralta, there are shelves on every wall lined with beautiful ceramic pieces. Behind the shop, Executive Director Angela Smith Kirkman talked with her colleagues while a class took place outside.

At age 18, Kirkman discovered her interest in pottery. While attending college in Colorado, Kirkman impulsively wandered into the pottery studio.

“It was never my major,” she said, “but I wandered there when I was a freshman and just fell in love with it, and I’ve been doing pottery ever since.”

Paseo Pottery has been around for 30 years. It was established as a co-op by three local artists and has been part of the Railyard scene ever since. Kirkman hopes to expand the business as it gets more and more popular.

Kirkman manages the gallery as well as the classes. Before she was able to take over the business three years ago, she had been a volunteer at Paseo Pottery. Since she took over, Paseo Pottery has become a charity, donating proceeds from classes to local nonprofits. Although she had been hesitant to manage it, Kirkman felt ready when she realized her desire to do something that would change lives. Inspiration came to her at a protest in Standing Rock, N.M., on the Navajo Nation northwest of Crownpoint. Kirkman knew she needed to serve a cause.

“We’re really proud to say we have donated over $20,000 in our first three years as a charity,” she said, “so that’s hopefully helping to make a difference.”

Paseo Pottery has donated to six organizations so far. Each year, it goes through a process of choosing nonprofits to donate to based on Paseo Pottery’s teachers and students. Everyone gets a vote for where they want their money to go. At the end of the year, based on the number of votes, they send their yearly donations to a variety of nonprofit organizations. At the moment, Paseo Pottery has a dozen volunteers, and they keep adding more.

The shop receives a variety of students, with half being tourists and the other half being people who want to try something new. Classes are two hours and are built for beginners. Students are offered beverages, and they are able to play freely with the clay. It is a great spot for families looking to do something fun. The recommended minimum age is 9 for kids to be able to reach the paddle on the wheel, but it is freeform and anyone with an interest in ceramics can join.

Paseo Pottery has had its share of challenges. During the pandemic, it was shut down like other businesses. Kirkman said it was a stressful situation and there was a lack of income for a while. On the positive side, Kirkman said, “We were able to use the time to create an outdoor classroom, which is great because now we could be outdoors in the fresh air and socially distant.”

Claudia Hochverg is a new volunteer teacher whose focus is hand building, a technique for forming clay by hand rather than the throwing wheel. She started four months ago after going through her training period with Kirkman. Her interest in clay peaked about three years ago. Hochverg went on to explain how she loves the idea of being able to use something that came from the earth. “It’s kinda messy and fun,” she said with a chuckle.

Hochverg enjoys coming together with other artists and learning from them. She, like Kirkman, had the urge to make a change and help others, especially during the pandemic.

At Paseo Pottery’s outdoor classroom, Brian Crow, who was visiting from St. Louis with his husband and friends, prepared to move his newly formed piece to the kiln. “I decided to do this today because it is something new and exciting that none of our group had done before,” he said.

Crow was impressed by the money that had been raised and awarded by Paseo Pottery.

Stephany Zambrano will be a junior at