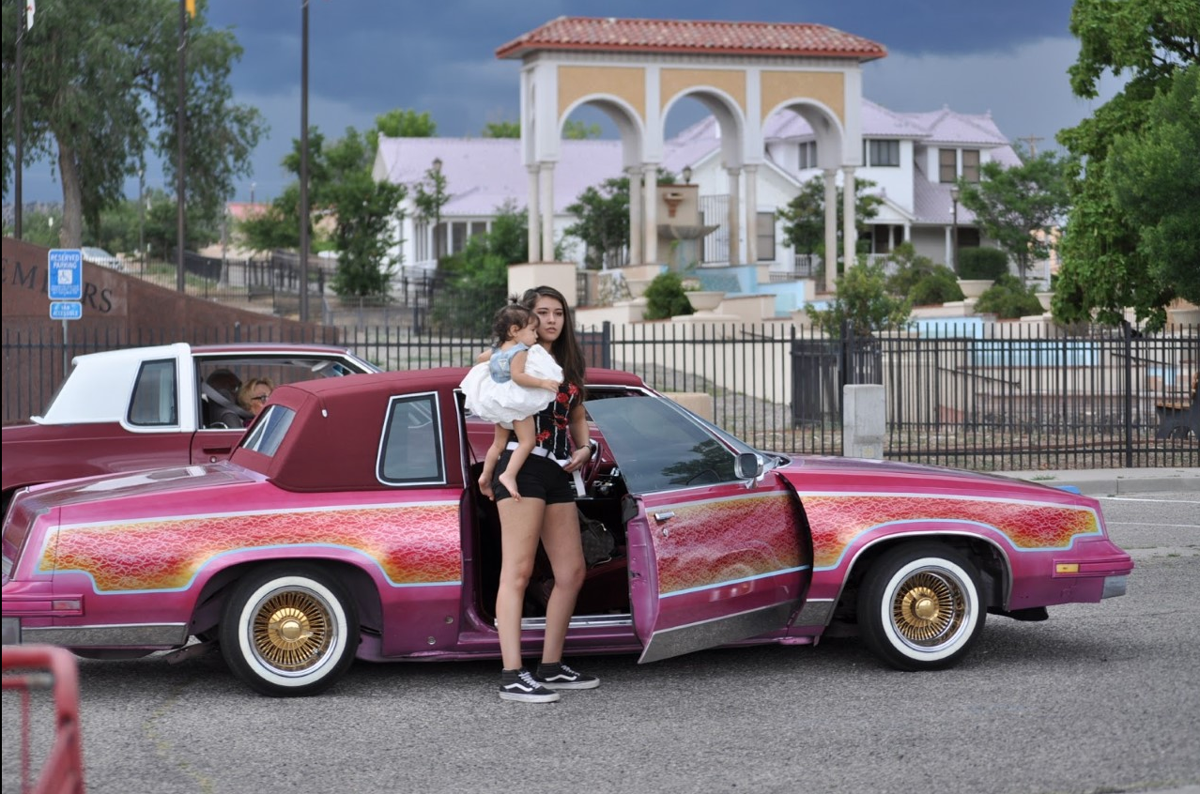 Marisol Medina, 16, was recognized this week by Española's mayor for her efforts to cultivate the culture of lowriders and Española among youth. 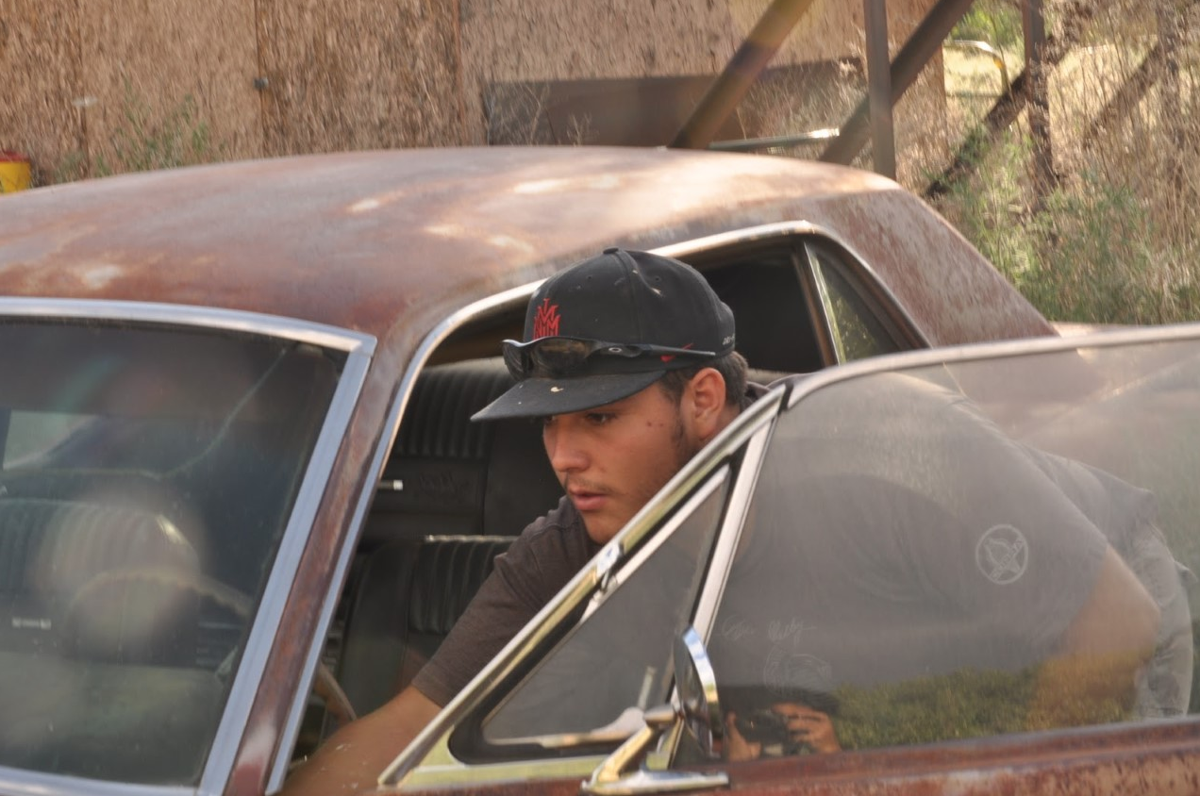 Andres Ulibarri pops the hood of his 1965 Ford. 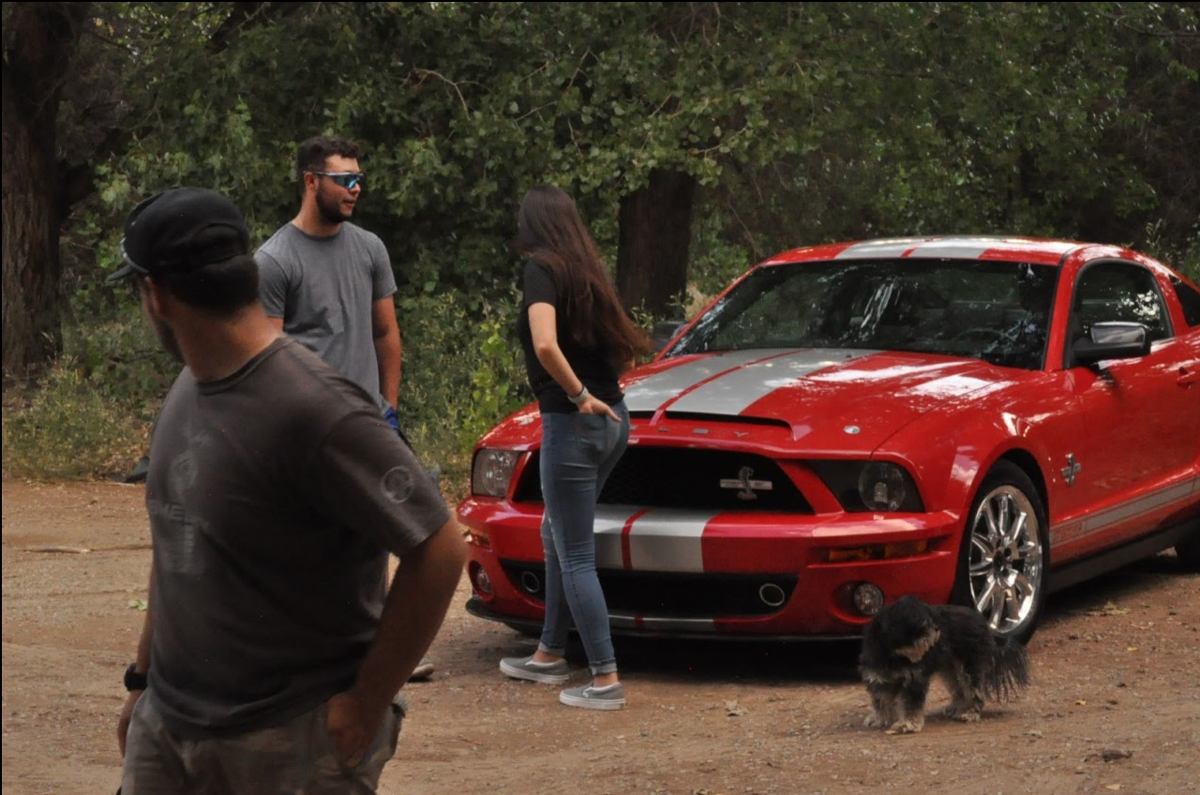 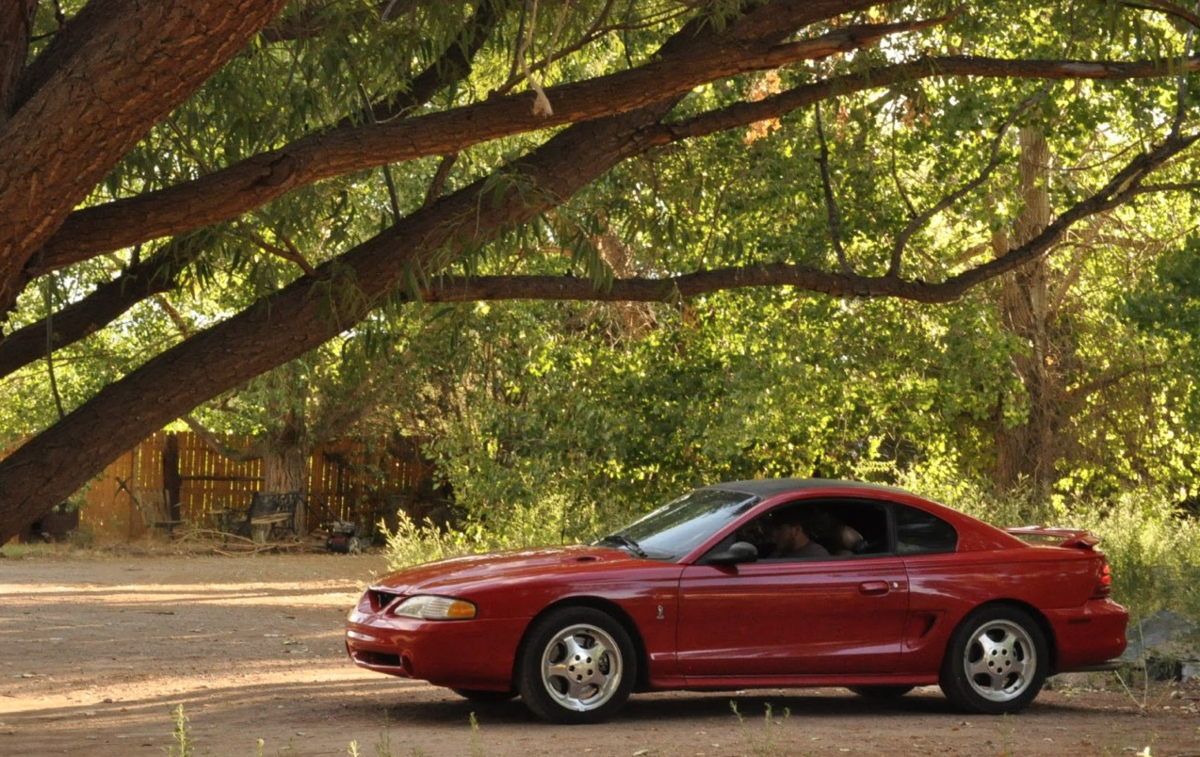 Andres Ulibarri in his Shelby Cobra. 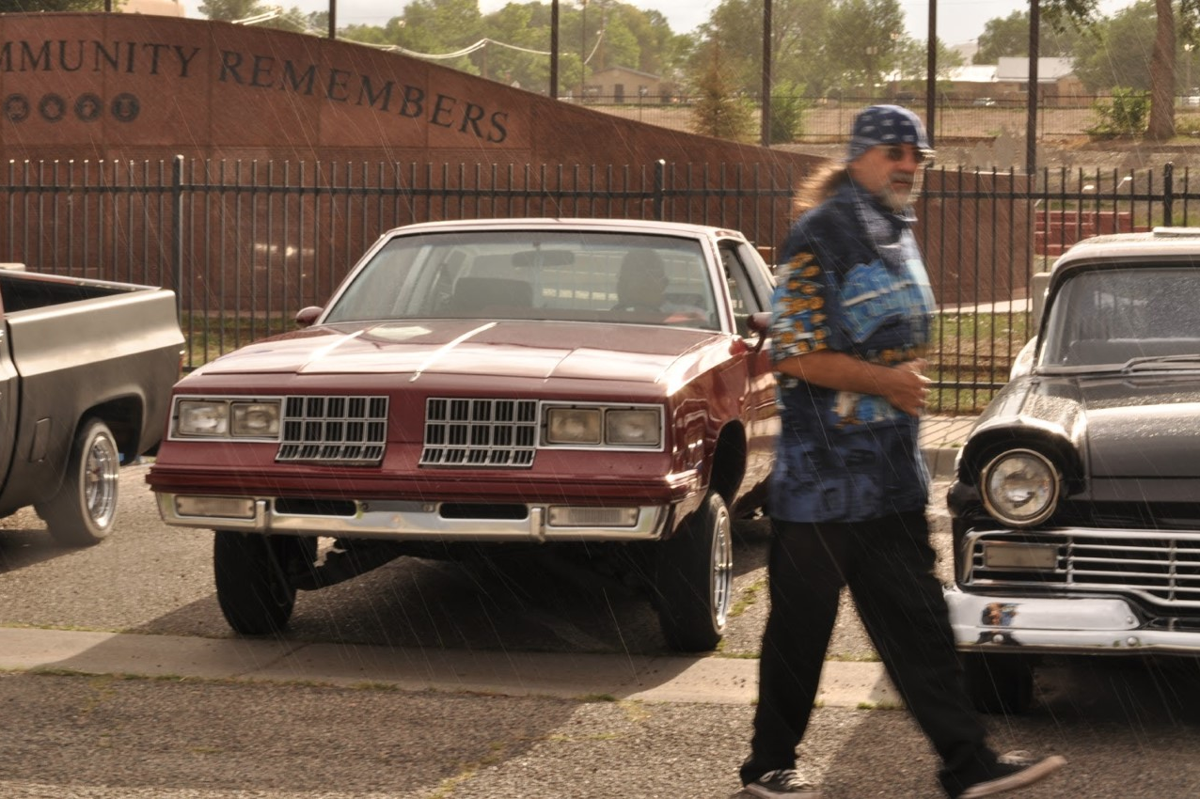 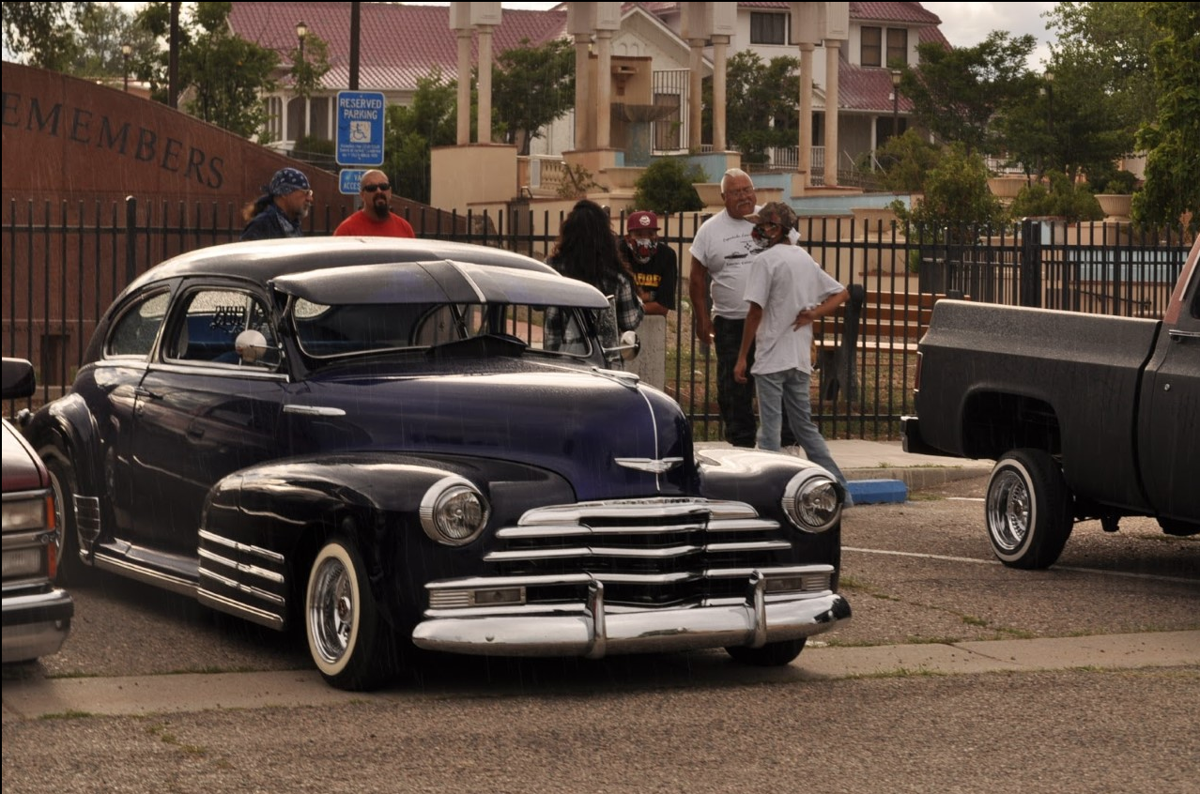 Marisol Medina, 16, was recognized this week by Española's mayor for her efforts to cultivate the culture of lowriders and Española among youth.

Andres Ulibarri pops the hood of his 1965 Ford.

Andres Ulibarri in his Shelby Cobra.

Turbo, a poodle, sprinted from where a rusted 1964½ Ford Mustang was parked to bark at a glowing red Shelby GT500KR, its 540 horsepower roaring under Ron Ulibarri’s foot.

His grandson, Andres Ulibarri, stepped out from his 1994 Shelby SVT Cobra to tell Turbo to heel as Derek Roybal parked his black 2012 Mustang beside him, laughing.

The purring engines, smell of gasoline and spotless exteriors are part of a multigenerational lifestyle for the teens. The recent graduates from St. Michael’s High School, and others like them, have mechanized, bonded over and invested in their childhood fascination: cars.

“Ever since I was a little kid, it was Mustangs,” said Roybal, 18. The cars “are American made and they’re badass, if I’m being honest.”

For most people, a car is a simple commodity to get them from Point A to Point B. But for some New Mexicans, cars are cornerstones of community, outlets for artistic self-expression and even tools for faith. Ulibarri and Roybal are among the countless car enthusiasts in New Mexico who enjoy cruising, racing, showcasing and modifying their cars on the hot, cracked asphalt around Santa Fe.

Roybal credits his older brother, 26-year-old Joey Roybal, for his love of Ford Mustangs. Joey Roybal owned one when he was younger, and his younger brother vividly recalls the unmistakable purr of its V6 engine and the car’s red, striped exterior.

Andres Ulibarri was similarly influenced by car admirers in his family. That passion “was just always in the family,” he said.

Ulibarri said his mom passed the Cobra, which was passed down to her from her grandparents, down to him. They won’t be upgrading to the most revered family heirloom any anytime soon, however. Grandpa Ron Ulibarri tells them the GT500KR is off limits.

“He never lets me drive it,” Andres Ulibarri said.

But a love of cars isn’t solely dedicated to older models. Sometimes upgrading to newer models is necessary.

Sam Nelson, a rising senior at The MASTERS Program, has plans to modify his beloved 2015 Toyota 4Runner, which he purchased when his old 4Runner, which he’d inherited from his parents, broke down.

“It never broke until it did, so it was very reliable. It was good in different weather conditions, it was good off-road and had decent gas mileage,” said Nelson, 17.

Nelson already has installed new wheels and plans to change the suspension and add a winch for off-roading.

Isabell Gallegos, who will be a senior in the fall and attended Desert Academy before its recent closure, said she prioritized affordability and maneuverability when she purchased her 2018 Mitsubishi Mirage.

“I needed a smallish car that could get me places that I needed to be — a car is a necessity for me to get to rehearsals and to get to school,” she said, also pointing to other features like automatic drive and Bluetooth so she can play music from her phone.

For car enthusiasts, however, functionality often takes a back seat to horsepower and aesthetics.

“Whenever I see a nice [car], I’ll get excited” said Gideon Soifer, a soon-to-be senior and car enthusiast.

“I do really like the sound of the engines — especially if they are louder, but I know a ton of people don’t like that,” the 17-year-old said, adding he’s loved automobiles since he first saw a Camaro when he was a kid. “It was the first car that caught my eye, and that really started everything.”

From off-roading in the backcountry to cruising St. Francis Drive or just commuting to school, experts say teens should know their vehicle inside and out in order to be safe on the road and to avoid costly issues with maintenance.

Clemmer also said it’s important to look for a few key things when searching for a car, to be sure it’s operational. He said teens — and all buyers — should always check warning lights, oil stains and weird sounds.

“Have a prepurchase inspection done. A diagnostic from a qualified mechanic is a good idea,” Clemmer added, noting smoke from the tailpipe or engine is a telltale sign something is wrong.

For the most part, however, “If the car looks like it has been taken care of, then it probably has been,” he said.

Still, there’s always a risk of needing to replace worn parts on older vehicles. Without consulting a professional, trying to upgrade your car can do more harm than good, Clemmer warned.

“Make sure you know what you are doing when changing parts. You can cause serious damage if you do it incorrectly,” he said. “A little knowledge about a subject is a dangerous thing.”

Perhaps there’s no better place to find car modification and customization expertise than in Española, arguably the heart of New Mexico’s lowrider community.

For Española legend Mr. Lowlow, soon to be baptized as Arthur “Lowlow” Elijah Medina, fully customized lowriders are an essential tool for community building and service. Medina, with his wife, Joan Ortiz, established Lowlow’s Lowrider Art Place in Chimayó in the early 1980s. Here, visitors and locals can admire the different stages of a lowrider’s construction, from the lowering of suspensions to the iconic airbrush paint jobs, as well as other notable features, like Medina’s handmade rusted crosses. The exhibit, while still a work in progress, is open to the public by appointment, Medina said.

“We just want people to have an experience of New Mexico,” Ortiz said. “That’s all it is.”

Medina started painting cars at 17 years old in the 1980s, with nothing more than four cans of spray paint and a few pieces of cardboard. He showed photos of the result: a souped up, specter-white 1967 Pontiac Grand Prix featured in National Geographic and New Mexico Magazine in 1982.

He said his efforts also stem from his faith. A self-made artist and avid fisher, Medina said he also ministers to people who come to admire his lowriders. Many of Medina’s paint jobs and murals depict traditional Christian imagery, including Our Lady of Guadalupe.

“With us, we always put faith first. It’s fe y cultura,” his wife said. “Every time we’re out, my husband’s always ministering. He always likes to pray for people. We always try to pray before we cruise, too.”

On a Saturday evening earlier this month, Medina, donning a blue bandanna and face mask and bearing a wooden staff, organized a cruise night with his family in which nearly 50 decked-out cars drove low and slow through the Española Valley. Among the drivers, passengers and spectators were families young and old.

Ortiz and Medina both have made passing down the art of lowriding to the younger generation a priority. Their daughter, Marisol Medina, 16, not only helps her parents with the exhibits; she has her own classic car to modify: a 1967 Pontiac Grand Prix.

She said her enjoyment comes from how unique the art form is and how meaningful it is to her community. On Sunday evening, she and 16-year-old Cruzito Valdez received awards from Española Mayor Javier Sánchez for their efforts to cultivate the culture of lowriders and Española among youth. Sánchez that day proclaimed the month of July as Lowrider Month.

Ortiz said that any teenagers interested in the lowrider life should start small, ask questions and not be shy.

“Go with what your heart feels. … Just do it, and we’ll send you to somebody that can help you out or teach you to do it. I encourage them just to do it,” Ortiz said.

Ben Timm will be a senior this fall, though he is unsure which school he will attend following Desert Academy’s closure. Contact him at bentigertimm@gmail.com.

Gabriel Biadora is an incoming freshman at the University of New Mexico. Contact him at gbiadora@unm.edu.