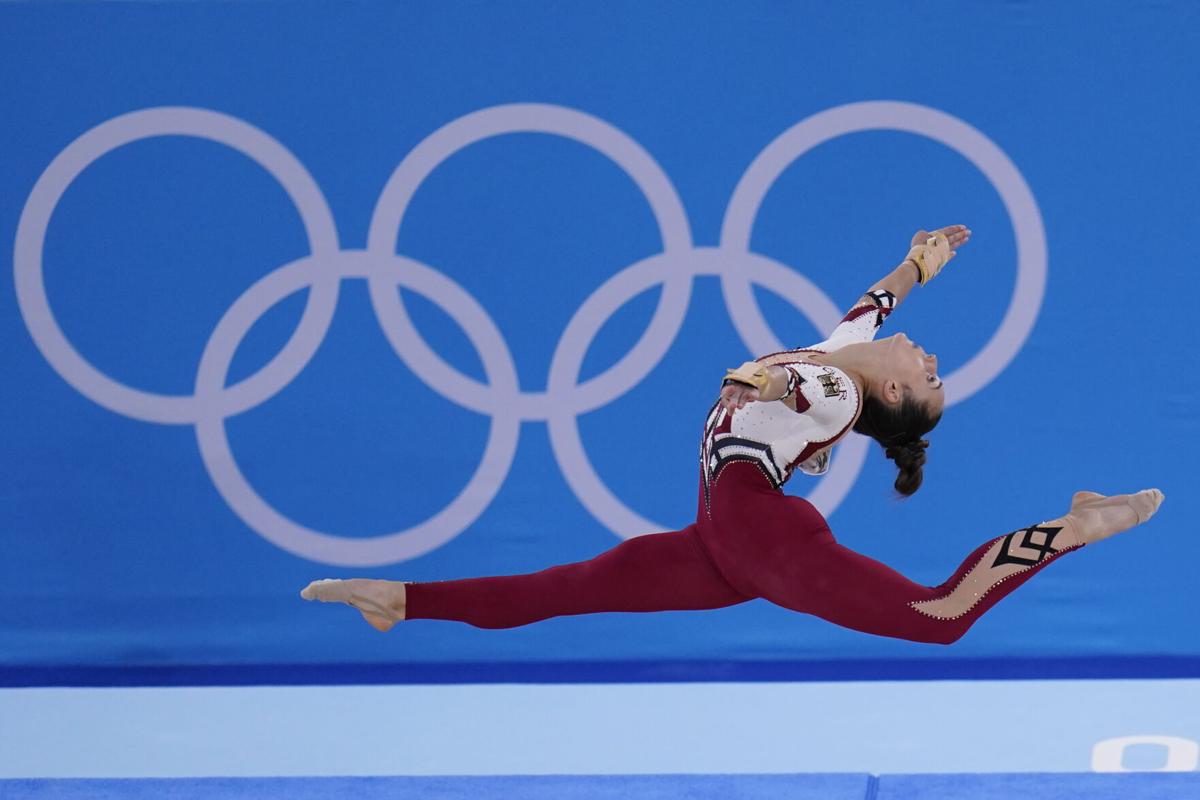 Pauline Schaefer-Betz of Germany performs her floor exercise routine last month during the 2020 Summer Olympics in Tokyo. The German gymnastics team wore full-legged unitards that went down to their ankles, eschewing the traditional bikini cut that ends high on the hip. The athletes said they were trying to combat the sexualization of young women and girls in their sport. 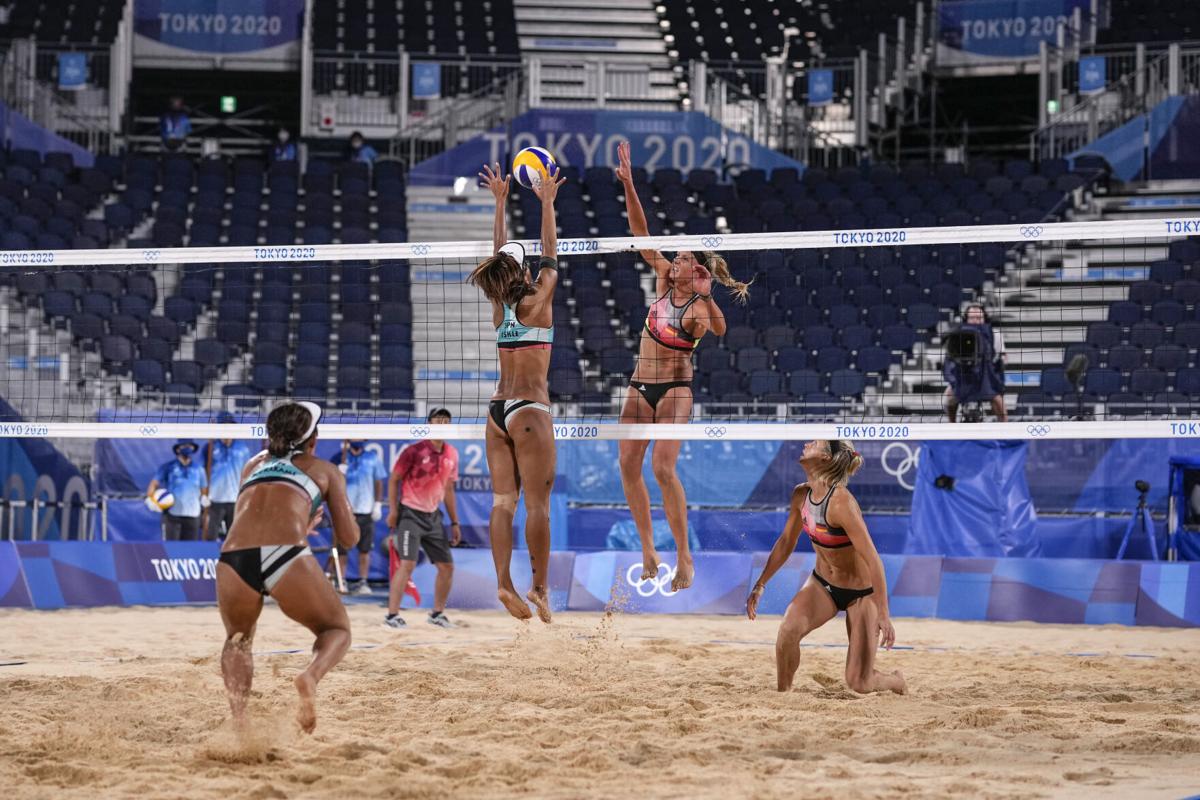 Japan’s Miki Ishii, center left, attempts to block against Margareta Kozuch of Germany during a women’s beach volleyball match last month in Tokyo. Most of the women playing beach volleyball at the Olympics wear bikinis as their uniform, but it’s not required.

Pauline Schaefer-Betz of Germany performs her floor exercise routine last month during the 2020 Summer Olympics in Tokyo. The German gymnastics team wore full-legged unitards that went down to their ankles, eschewing the traditional bikini cut that ends high on the hip. The athletes said they were trying to combat the sexualization of young women and girls in their sport.

Japan’s Miki Ishii, center left, attempts to block against Margareta Kozuch of Germany during a women’s beach volleyball match last month in Tokyo. Most of the women playing beach volleyball at the Olympics wear bikinis as their uniform, but it’s not required.

As millions of people watch the 2020 Summer Olympics, the double standards set over the uniforms of female and male athletes have become extremely obvious. The “fashion over function” mentality is perpetuated by regulations set by international committees, forcing female athletes from some sports to wear more revealing clothing, even though the adjustments do not serve to enhance performance.

Coercion to wear these uniforms is a blatant attention-grab by the athletic committees to attract more viewers. However, this means of bringing attention to female athletes does not positively shine a light on their hard work and skill; rather, it objectifies them and diminishes their accomplishments. International athletic committee regulations focus on making the uniforms as minimal as possible, making it seem as though female athletes are there simply to visually appease the public while their male counterparts attend the Olympics to demonstrate their athletic prowess.

Even before the 2020 Olympics began, the issue of female athletes not being able to choose what uniform they felt comfortable competing in was prevalent, especially at the European Beach Handball Championships. According to the International Handball Federation’s rule book, female athletes are required to wear bikini bottoms with a side length measuring “a maximum of 10 centimeters.”

Instead of acquiescing to the patriarchal system of exploiting the female body by wearing the uniforms, the Norwegian women’s beach handball team protested the rule book by wearing shorts to play instead of bikini bottoms. The team was fined $1,775.

The federation’s handbook requires male players to wear shorts, so it is obvious wearing less-revealing clothing does not inhibit their athletic capabilities — why would it be any different for female players?

The International Handball Federation justifies its sexist regulation by claiming these uniforms “increase [athletes’] athletic performance”; however, the federation fails to provide a reason why these bikini bottoms would serve to aid their athletic performance. Even though it is not directly stated, the public can surmise why these athletes are required to wear as minimal clothing as possible: to sexualize and objectify female athletes.

Beach handball is not an Olympic sport, so the Norwegians’ protest was not carried over into the 2020 Games, but similar protests and accommodations against more revealing uniforms occurred.

Female German gymnasts wore full-body leotards as opposed to the popularized versions showing the athletes’ legs. In doing so, they proved that they could compete at the same, illustrious level despite wearing apparel with more coverage. All this to say, the German gymnasts wished to spread a message of freedom over their bodies and convey respect toward those wearing any type of uniform that makes them feel comfortable. Thankfully, differing from the reaction to the Norwegian handball players’ protest, the Olympic committee did not level any punishment on the athletes, and they were able to compete without discouragement of their attire.

Although many team sports had to act individually to be able to wear acceptable uniforms, the Olympic committee amended its laws to ensure athletes had more of a choice over their uniforms. At every past Olympic Games, female beach volleyball players were required to wear bikinis to play. However, at this year’s competition, shorts, long-sleeve shirts and other clothing with more coverage were accepted. Despite this, many female beach volleyball players still wear bikinis because they are more suited for the heat and attract less sand. This is the beautiful thing about allowing players to choose their uniforms: Everyone can decide what works best for themselves, allowing them to perform at their finest.

Forcing female athletes into uncomfortable uniforms relinquishes all autonomy they have over themselves, making them into a thing rather than a human being. These female athletes have worked on their bodies extensively to be able to compete in the Olympic Games, so it would be exploitative and cruel to force them to portray their bodies in a certain way. Athletes will be able to compete at their peak performance when they are wearing what makes them feel confident, not when they are distracted by contempt toward regulated uniforms.