BTS performing in California on their Love Yourself: Speak Yourself world stadium tour. 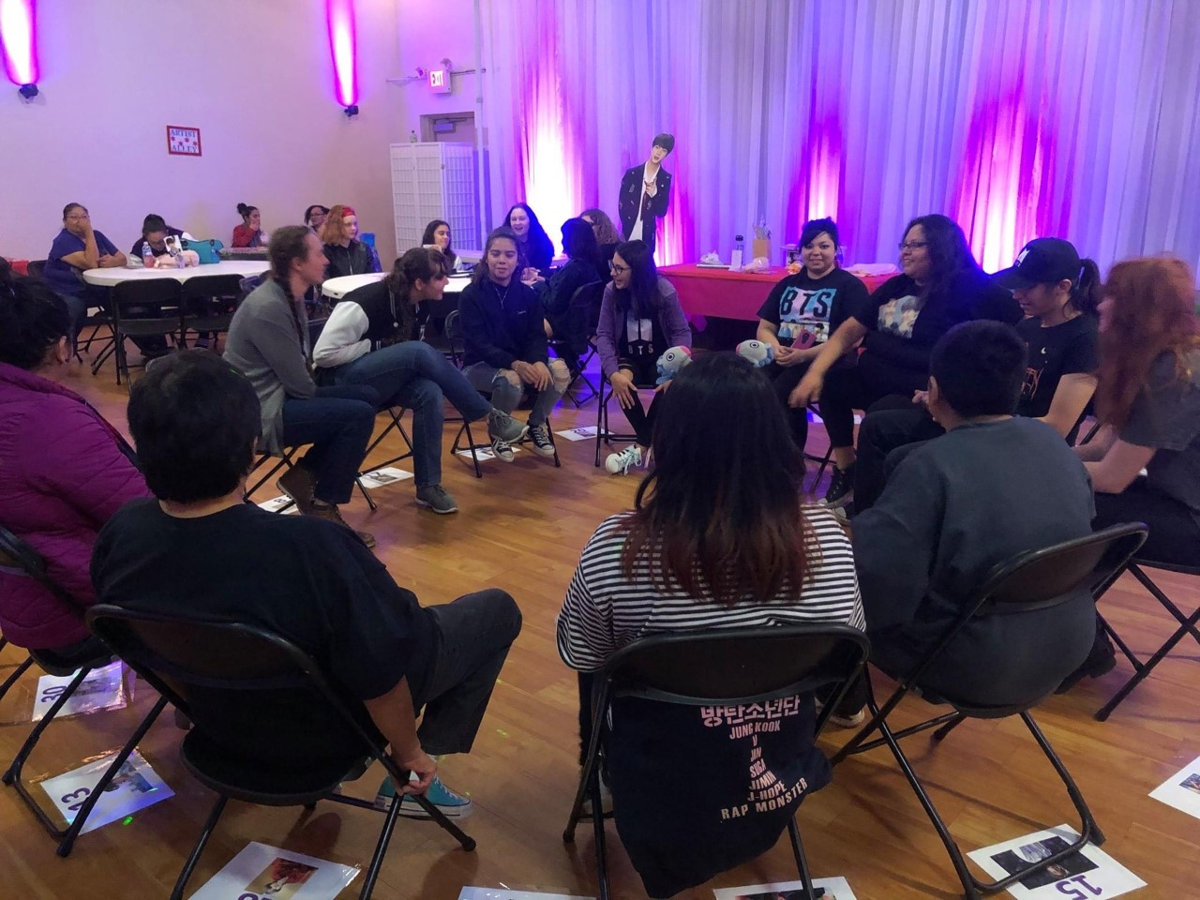 BTS performing in California on their Love Yourself: Speak Yourself world stadium tour.

The phenomenon of Korean pop music, more commonly referred to as K-pop, has taken the world by storm in recent years.

With its influence ranging from South Korea all the way to the United States, it’s no surprise K-pop fandom has even reached the small, high-desert city of Santa Fe.

Some people think of K-pop fandom as a welcoming, friendly community, while others think of the niche following as aggressively obsessive about their favorite groups. No matter the group or artist, more commonly referred to as “idols” in South Korea, their fans’ love and support can be extreme.

“Being a [K-pop] fan is more than just being a fan of the music; it’s almost like a whole religion,” says Melanie Ortiz, a Santa Fe High student and fan of various groups, including ATEEZ and NCT.

Ortiz notes some fans simply like the music but others are more drawn to the intricate and eye-catching dance choreography — or even the attractive idols.

K-pop fans’ dedication has helped skyrocket many groups to the forefront of the American music industry, most notably BTS, Blackpink, Monsta X and NCT. These, and more, have been competing for top spots on the Billboard charts, consistently breaking streaming records and have even been nominated for numerous American music awards.

Their localized success is no surprise, given the large support from fans. Some K-pop followers, Ortiz says, “are just absolutely crazy about anything to do with BTS or other groups.”

These kinds of perceptions might lead people to believe the K-pop community is toxic; however, K-pop culture in Santa Fe is a bit more tame than other parts of the country and world. Still, the phenomenon’s impact is noticeable among teens.

Anthony Leos, a BTS fan at Santa Fe High, says K-pop’s presence is all over school, “with kids wearing merchandise and forming small communities of friends who share the same interests.”

And Santa Fe High isn’t the only school picking up on the trend.

A BTS Dance Club recently emerged at Santa Fe Indian School, where club members learn choreography to perform from the band’s songs and spread the message of “Love Yourself” at the school. The message is inspired by the group’s recent albums of self-exploration and its campaign with UNICEF to end violence.

“For me, it was a gateway … a way to let go of hard times and stress. And to spread positivity across the campus at school,” says Britney Lovato, a recent graduate who co-founded the club and was its president.

Michael Martinez, a freshmen English teacher at Santa Fe Indian School and club sponsor, felt the creation of the club could provide students a place to express themselves in art and dance.

“I think we need more opportunities like that in our schools and our communities,” he says.

“This is a unique crossroads to hit them with a positive message that they can carry with them throughout their years of high school to navigate themselves,” Martinez adds. “I don’t just want to teach them sentence structure, I want to give them life lessons they will carry outside the class … [so they can] love themselves each and every day and understand that they can succeed.”

The message, which has impacted students already, can be a source of strength and inspiration.

“Their whole campaign of ‘Love Yourself’ really contributed to my own personal growth and self-confidence,” says BTS Dance Club member Summer Sapcutt. “I really credit BTS and their message a lot.”

These K-pop themes have emerged outside of schools on a statewide level as well. For example, the BTS New Mexico Unofficial Fanclub was formed in 2018 with the goal to bring together fans. The fan club, which has 13 members on the planning committee, organizes events around the members’ birthdays and new music releases, with different events such as random dance challenges, outfit and fan art contests, and raffles.

“New Mexico is a place where you don’t really expect to meet that many fans of K-pop, but given that we [have] very diverse cultures and have so many people from around the state who can say that we have this connection with one another, we thought why not hold these very unique events where we can just bring people from around the state together and have a good time?” says Shelby Roberts, a student at the University of New Mexico and organizer for the club.

The New Mexico fan club also mirrors the band’s beliefs in philanthropy. Members of the group say they give some of the money raised by raffle tickets and donations to organizations in the community, including homeless shelters and environmental groups.

K-pop groups around the globe similarly give to charities and social movements en masse, with BTS and their fan base, named ARMY — meaning Adorable Representative M.C. for Youth — collectively giving over $2 million dollars to the Black Lives Matter movement.

“The boys [BTS] support this, so why can’t we match that? … Why don’t we show back our appreciation for what they do?” asks Roberts. “Because we sometimes feel like as a fandom we don’t do enough. We vote for them at award shows, and let’s do more to show that we love what they do.”

Lincoln Byrd is a rising senior at

Seneca Johnson is an incoming freshman at Yale University. Contact her at senecasjo@gmail.com.