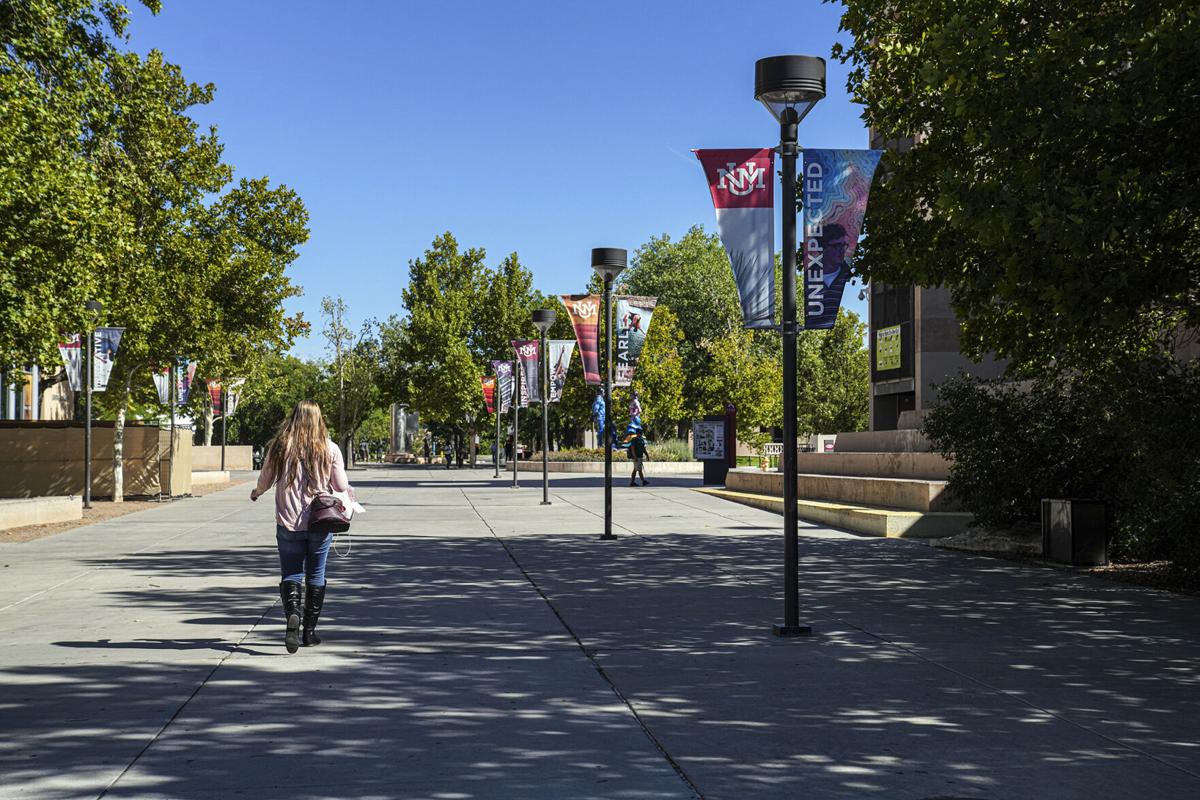 A student walks through the University of New Mexico campus in September 2020. Many young students are facing the highest college prices of all time, according to Forbes. 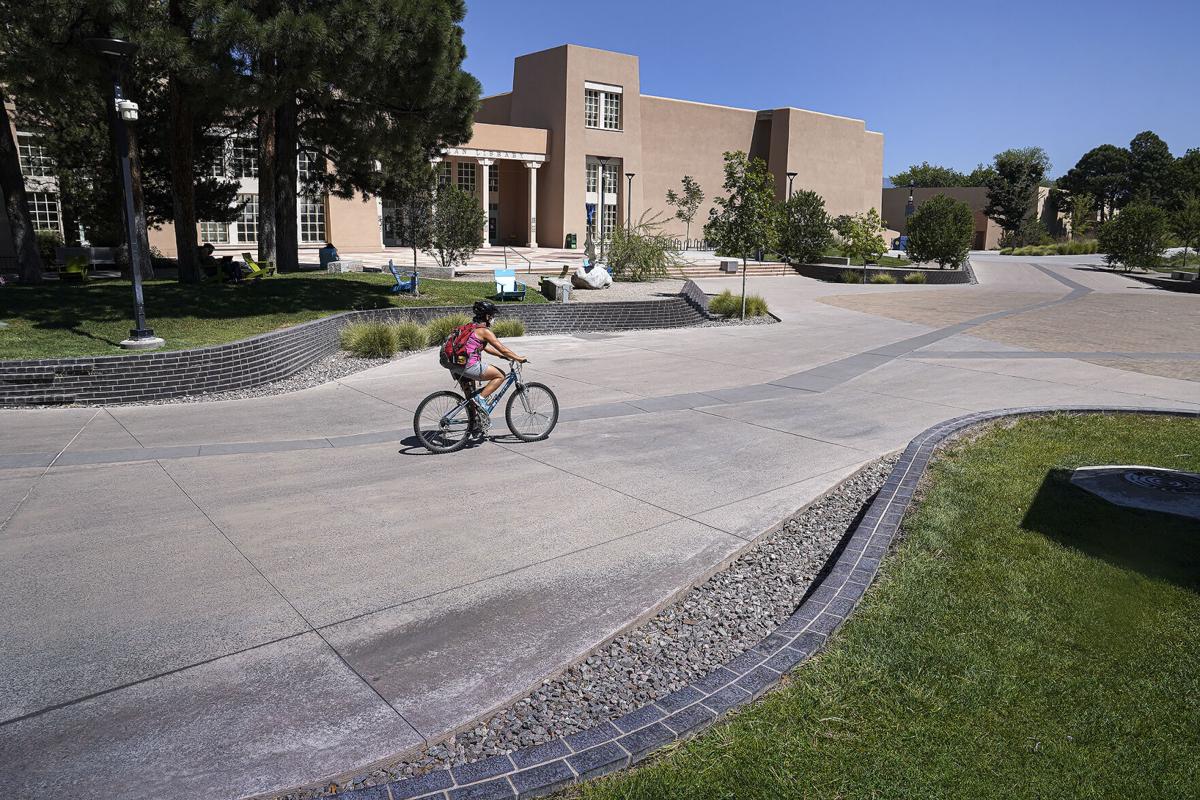 A cyclist rides through the UNM campus near Zimmerman Library in Sept. 2020.

A student walks through the University of New Mexico campus in September 2020. Many young students are facing the highest college prices of all time, according to Forbes.

A cyclist rides through the UNM campus near Zimmerman Library in Sept. 2020.

As fall rolls around each year, a new class of high school seniors anxiously prepares for battle; submitting applications, revising essays and applying for scholarships gearing up to face the first daunting behemoth of adulthood: college. And while parents and grandparents have been drilling the necessity of attending college into the heads of students from a young age, college was not the same financial monster when they went as it is now.

Financial news website GoBankingRates conducted a study regarding the average cost of attending a four-year university adjusted to the value of money in 2020, with results to the chagrin of younger generations. Taking into account average tuition, room and board and other student expenses for all four years, baby boomers paid an average of $39,780, millennials were charged approximately $70,000, while Generation Z students are expected to cough up an astounding standard of $90,875 to earn a degree. In other words, boomers were going up against bunny rabbits while members of Gen Z are tasked with taking down Goliath.

While many young students are facing the highest college prices of all time, according to Forbes, many colleges offer copious amounts of financial aid to senior citizens who want to update and augment their college degrees or are attending college for the first time. Twenty-two states in the U.S. offer free college to senior citizens at any state or public university, and many additional states offer drastically reduced prices.

Of course, there are different requirements varying from state to state, including the age a person must be to qualify to apply to these programs. Continuing education students must also undergo the same application process as all other students to be allowed acceptance, so they are not placed at an advantage over other applicants purely because of age. To the benefit of younger applicants, schools offering these programs generally wait until the second week of classes before admitting senior citizens to ensure there is enough space available. Therefore, younger students are prioritized because their enrollment determines the number of continuing education students the schools are able to accept.

New Mexico is not one of the states offering free college to senior citizens, but it does offer reduced tuition for seniors interested in attending school. At the University of New Mexico, people age 65 and older have the opportunity to pay only $5 per credit hour, but their ability to take certain courses is contingent on whether class space is available, and they are limited to taking only 10 credit hours at a time.

According to a representative for continuing education at UNM who asked not to be identified by name, “a lot of students are interested and take advantage” of the program because they either want to remain sharp in the competitive workplace, need something to occupy their time in retirement, or simply have a love for lifelong learning.

Although this program is a win for senior citizens looking to further their education, it is not as popular with the rest of the student body. Alannah Trujillo, a sophomore at the University of New Mexico, disagrees with the program, saying “younger students haven’t or are just starting to financially establish [themselves], yet [they are] expected to pay tremendous amounts more than those who have had entire lifetimes to build steady careers and incomes.”

While current college attendees and students planning on attending college within the next few years may be angry they have not been granted the same financial aid as senior citizens, it can also be argued that the lower cost incentive for older students does not pose a significant threat to younger students in the long run. Younger students’ career possibilities and opportunities may not be hindered by senior students because they are past retirement age and will not be trying to enter the job market alongside the rest of their graduating class.

Although opinions may differ over how the state regulates tuition rates for senior citizens, the Governor’s Office has set its sights on the possibility of “free college” for all students in the upcoming legislative session. With already sizable student loan debts consistently on the rise, free and reduced tuition for all people despite age would grant opportunity to all students seeking higher education.

Back in the 80s, I felt college was out of my reach financially, as well. Know what I did? I joined the Navy. It paid my entire way through school. When on active duty, I saved enough money to put myself through graduate school when I left active duty.

Where there is a will, there is a way. There are a multitude of scholarships and student work programs out there. I encourage you and the other "millennials" on whose behalf you are advocating for to explore them.

Based upon your research, writing and organizational skills, I know you are more than equal to the task.

Your research is commendable, and you're correct in your deductions. Looking at historical numbers, it costs 6x as much in full-time tuition at UNM in 2021 when compared to full-time tuition in 2001. I don't know about most people, but my income hasn't gone up to six times what I made in 2001.

Here's a "life hack". Do your first two years at a local community college. Apply like crazy for financial aid. (You can get scholarships and non-loan aid for all sorts of things, and not all aid is dependent upon your income or lack thereof.) Community colleges are cheaper per credit hour than four-year schools. While you're at it, get a two-year degree.

Once you've taken all of your "requirements" (such as English, college-level math, and laboratory science), then transfer to a four-year college so that you minimize how many expensive courses you need to take. Of course, there's nothing wrong with having an associate degree either - some associate degree programs can lead to jobs that are high paying.

For some people, though, going through a traditional college program isn't for them. There are still other things that can allow you to make a living wage, such as a trades program. Seriously, a good plumber makes darn good money! Any way you slice it, it's best if you can "be smart about it" whether you want a 4-year degree, a two-year degree, or a trade certification.

Good on you, Patricio, for mentioning the trades.

I forsee a huge shortage (it has already begun) of Plumbers, electricians, skilled carpenters, and appliance repair techs, to name a few.

They may not be glamorous or "cool" jobs, but the money is good, and it will get even better.