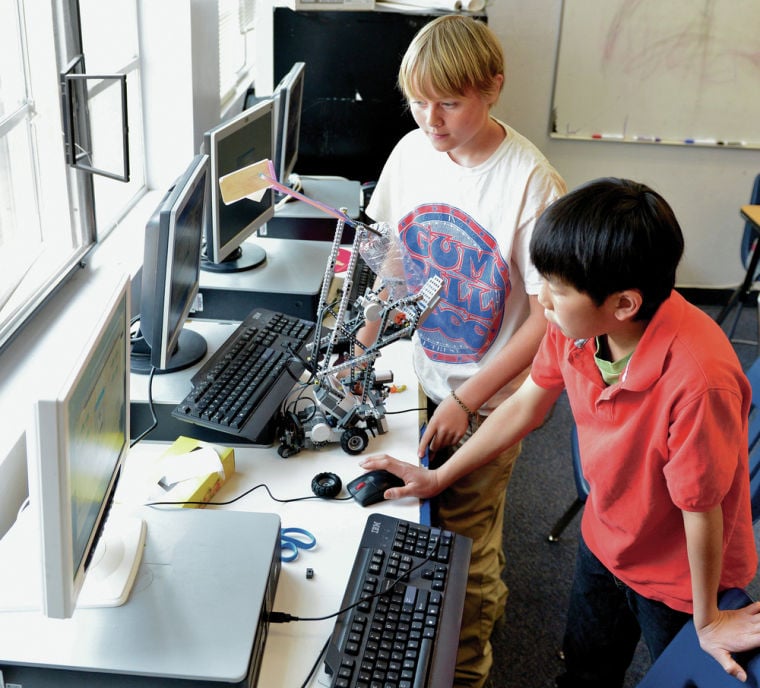 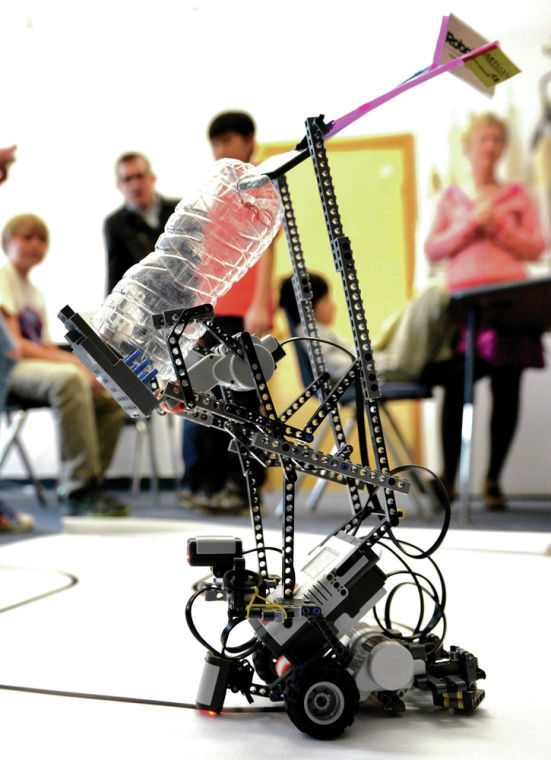 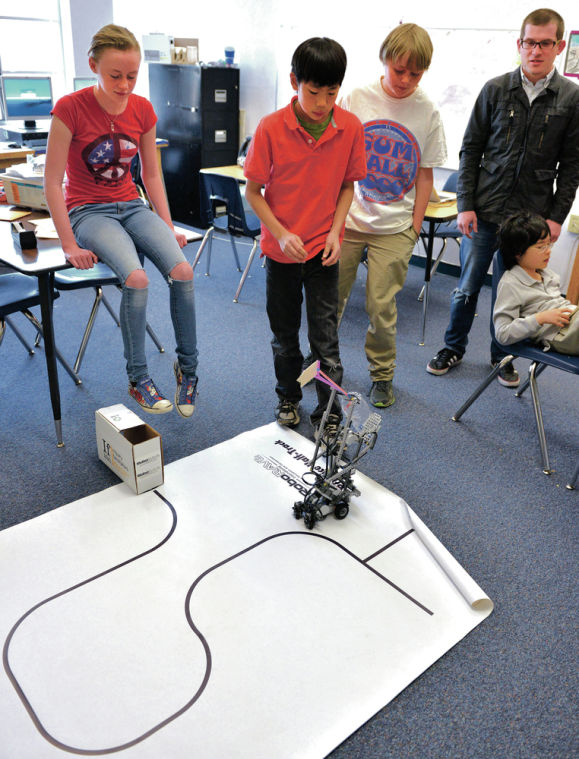 Acequia Madre Elementary School sixth-grader Jun-Hong Chen said he can see a not-too-distant future in which autonomous robots are “doing stuff that is harmful to humans.” Fourth-grader Rowan Jansens, on the other hand, envisions a day when he might create an adult-sized, human-shaped robot that would be able to fly to Mars.

And for sixth-grader Carmen Bella Moses, autonomous robots are already proving their worth as firefighting devices and in aiding disabled and blind people. “I like that they can help people,” she said.

Those three students, as well as sixth-grader Graham Purvis, make up a Robo Rave team of student robotics engineers who will represent their school in the upcoming statewide Robo Rave competition at the Albuquerque Convention Center on May 3 and 4.

Their robot, the computer-programmed Ciri, is a roughly 2-foot-tall, wheeled creation that is programmed to follow a nearly 10-foot-long curved pathway to its destination — a small open box at the end of that path — where it will drop a load of Ping-Pong balls. And all this in less than three minutes.

The students are part of a special-education enrichment class run by Angela Riemann. Mike Schoemaker, who works as an engineer for Los Alamos National Laboratory, has served as a volunteer mentor for the Robo Rave team since it started working on Ciri back in February.

“I just gave them a little advice,” Schoemaker said Friday morning as the kids demonstrated Ciri’s potential in a trial run. “They took the lead. They really did most of this on their own.” Though robots have fascinated kids for decades, robotics classes and competitions are becoming more popular among students today, he noted.

Ciri — made out of Legos, a plastic water bottle, some straws and other materials — came out of one of several Legos kits that Riemann purchased for the class with the aid of a $1,200 Dollars4Schools grant. Realtors Michael and Pat French started Dollars4Schools, an independent website that allows community members and organizations to privately fund individual school projects, in the autumn of 2010. According to its website, www.dollars4schools.org, the effort has generated funding for nearly 200 programs to date.

Carmen said the team had to first prepare a PowerPoint presentation as part of an application process to qualify for May’s Robo Rave. The kids also solicited partners (not sponsors) for their efforts, including ArtMan Productions, Southwest Sciences and architect Christopher Purvis. Those partners’ banners will be proudly displayed at the tips of the plastic straws that cap Ciri the robot.

Graham Purvis said more than 110 teams took part in last year’s statewide Robo Rave. First-place winners receive $200, second-place winners net $100, and third-place winners garner $50, he said. Riemann said if the kids win any of the prizes, they can split the money among them. She noted that through the semester, the kids have been staying several hours after school to work on Ciri.

Come May 3 and 4, Carmen, Graham and Jun-Hong will demonstrate Ciri without the help of Rowan, who has to take part in a National Dance Institute event that same weekend. But it is still a four-member group effort, and Riemann said she hopes the quartet continue to work together as a robotics team even as the sixth-graders prepare to go off to different middle schools in town.

Asked what he would do with an adult-sized, human-looking robot that could possibly fly to Mars, Rowan didn’t hesitate with an answer: “I’d get it to do all my chores — and my homework!”