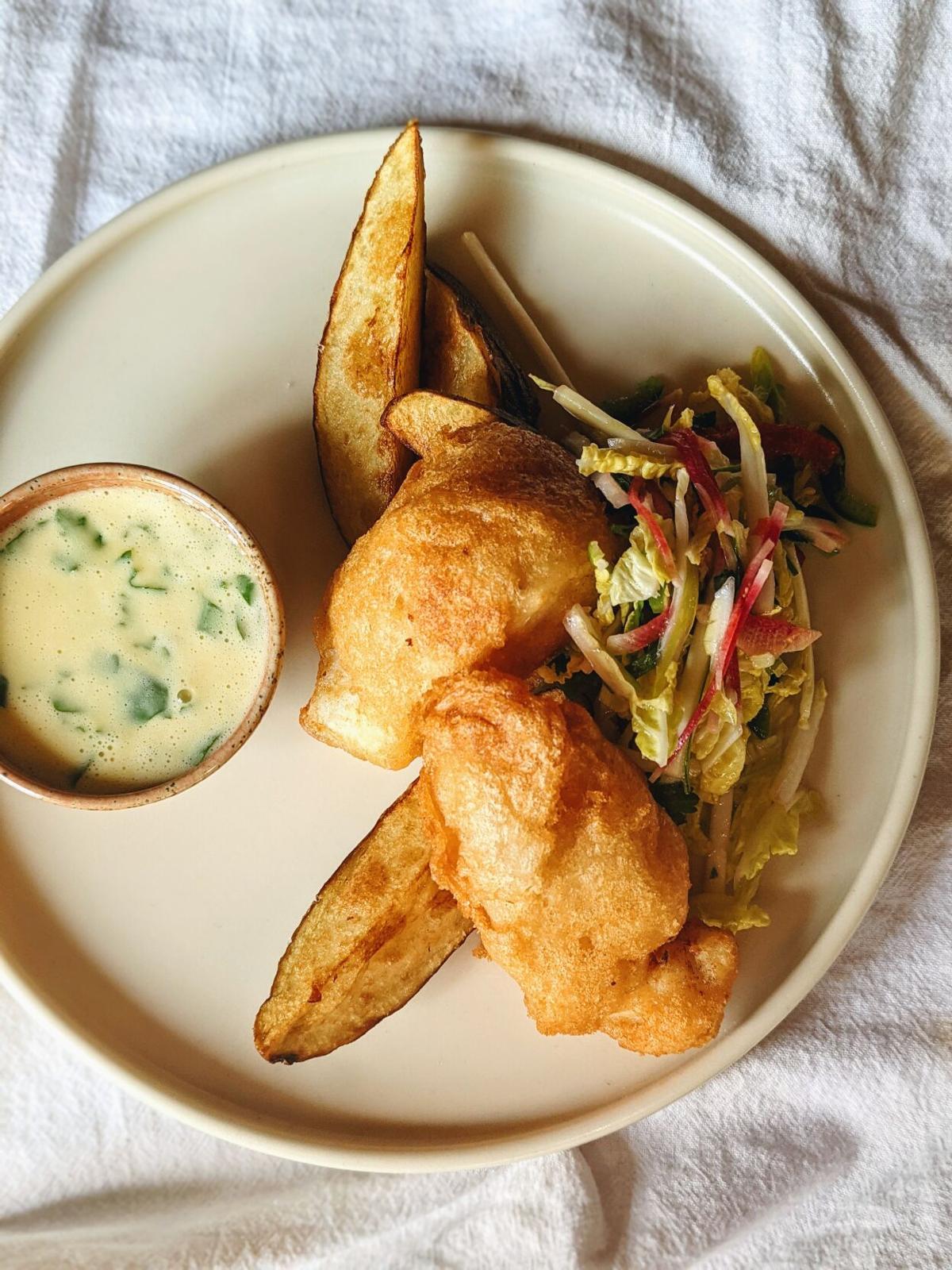 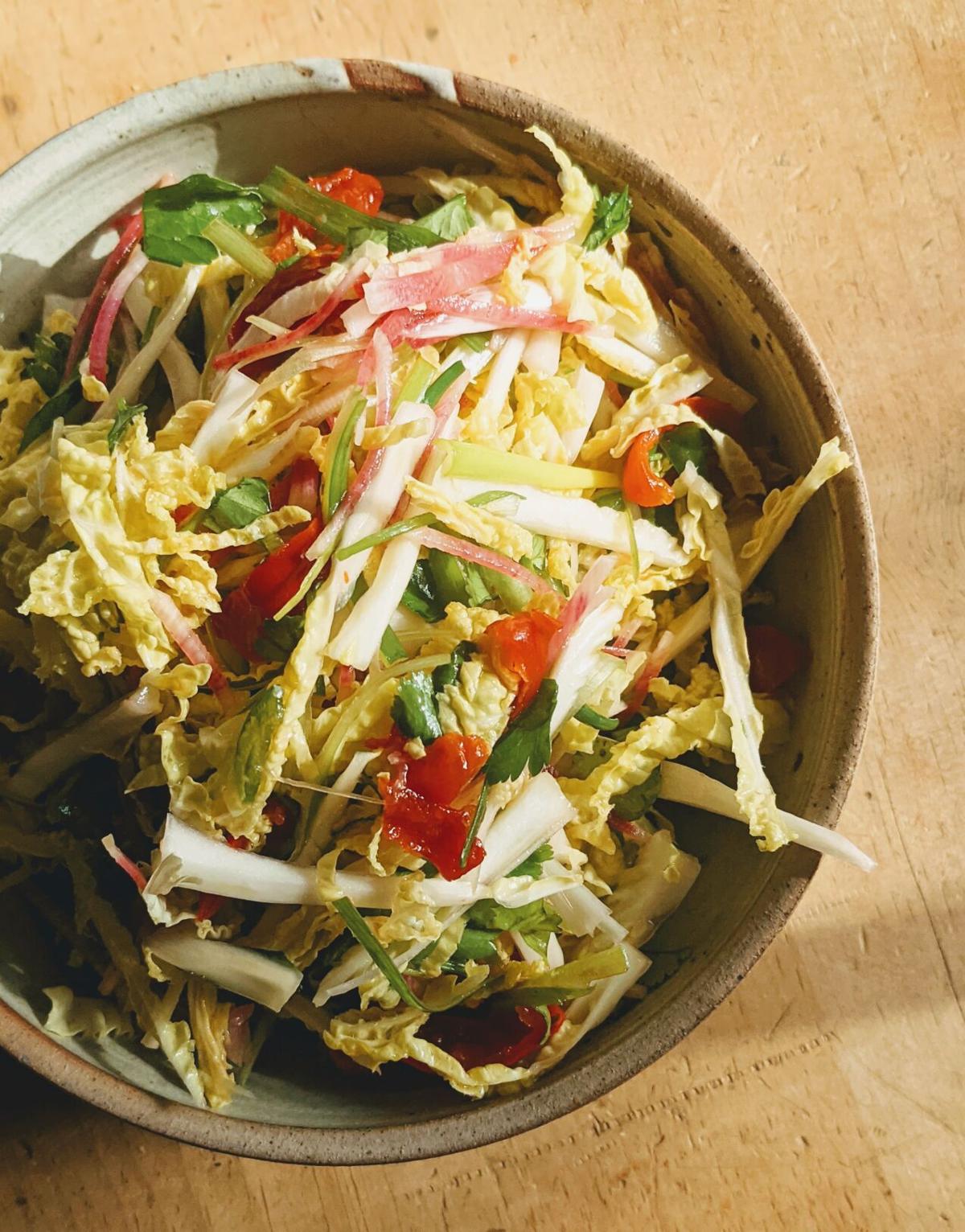 This slaw is a perfect companion to fish and chips. 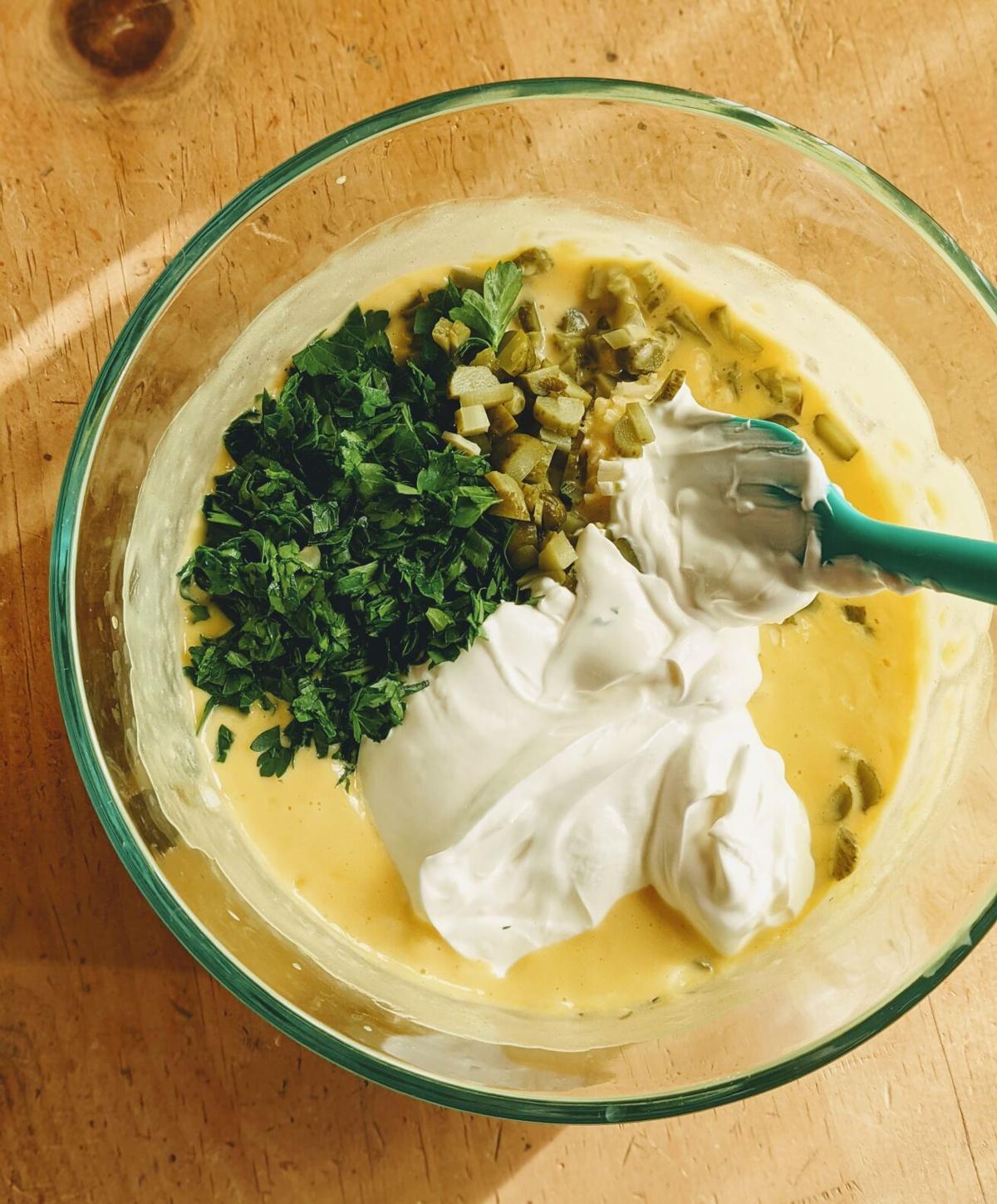 This slaw is a perfect companion to fish and chips.

I normally deep fry once a year, on Christmas Day, to make struffoli, little balls of dough that fry into a golden brown before being tossed with honey and orange zest and piled into a mound that I like to think resembles a Christmas tree, studded with rainbow sprinkles. But this year we have extended the frying jubilee into the new year to include another favorite dish that is a spectacular treat and comfort dish rolled into one: fish and chips.

As far as the fish is concerned, I use cod because that is what looked the best at the grocery store, but hake and haddock also work beautifully. If you want to venture away from the classic white fish version and head into the wild, consider less traditional options like salmon, halibut, shrimp or even shelled and butterflied lobster tails. For the batter, cider gives a nice apple-esque acidity that plays off the richness of the batter, but beer and sparkling water work well, too.

This recipe builds the tartar sauce by first making a saucy, lemony aioli before adding sliced herbs and cornichons. If this step feels like too much, just use a good store-bought mayonnaise (with ingredients you recognize) and simply fold in the other ingredients (leaving out the egg yolks and oil) to finish it off in a flash. For the slaw, I keep the dressing light and bright with lemon to play off the rich batter of the fish and creamy tartar sauce. Don’t be afraid to play around and make the slaw your own. I don’t think I have ever made a slaw the exact same way twice.

Even though this dish technically has four components: fish, chips, slaw and tartar sauce, don’t let that dissuade you! It can be managed easily by prepping the slaw and tartar sauce in the morning or even the day before. You could even boil the potatoes the day before, leave them whole and let them come to room temperature before slicing into wedges and frying. I would recommend reading the recipes in their entirety before beginning, which will make the cooking even easier.

For the tartar sauce:

1 cup of all-purpose flour, reserved in a bowl for dredging

Preparation: Bring a large pot of water to a boil. Boil the potatoes whole for 25 minutes, until they are partially cooked. Remove from the water, and when they are cool enough to handle, slice them into wedges. Reserve at room temperature.

To make the tartar sauce, whisk together the egg yolk, lemon juice and Dijon mustard. Very slowly drizzle in the oil, whisking the entire time. Your arm will probably start to feel tired. You can do it! Once you have added all the oil, fold in the garlic, sour cream, parsley, chives, cornichons, horseradish, salt and pepper to taste. Reserve in the fridge until ready to serve.

To make the slaw, whisk together the lemon juice, olive oil and honey in the bottom of a large bowl. Add the cabbage, green onions, watermelon radish, jalapeño, cilantro and parsley, and gently toss. Season with salt and pepper to taste. Reserve in the fridge until ready to serve.

When you are ready to get cooking, pour oil for frying so it reaches 3 inches from the bottom into a large, deep pot. You want to use a large enough pot so there is no chance of oil bubbling over. If the 3 inches of oil looks like it is getting close to the halfway point of your pot, you need to use a bigger pot. When cooking with hot oil, safety is the most important thing. All utensils and pots need to be absolutely dry so no spattering occurs. Bring the oil up to 375 degrees using a kitchen thermometer to gauge the temperature.

Preheat the oven to 250 degrees. Line a sheet tray with a couple layers of paper towels. Line another sheet tray with parchment. Have a spider or skimming strainer ready to go. Fry potato wedges in a few batches to not overcrowd the pan. I like to place potato wedges in the spider and gently lower them into the oil. You don’t want to quickly drop things from a distance and create the danger of splashing oil. You’ll notice the potatoes get brown and crispy in around 5 minutes. Transfer them to the paper towel lined sheet tray and sprinkle them with salt. Repeat this until all potatoes are cooked. Transfer the potatoes to the parchment sheet tray and keep in the oven while you’re cooking the fish.

Now it’s time to cook the fish. Lightly dredge each piece of fish in the bowl of flour, patting off any excess flour with your hands. Whisk together the 1 cup of flour, baking powder, sparkling cider and salt in a medium bowl. It should look like pancake batter. Bring the fish and this batter close to the pot of oil. One piece at a time, place a piece of fish in the batter to cover it entirely. Then using your hand but keeping it far away from the oil, carefully place the piece of fish in the oil, letting the bottom tip of the fish submerge in the oil for a few seconds before letting go. This prevents the fish from sticking to the pan. Repeat this with a few more fish pieces and cook until the fish is golden brown, around 5-8 minutes. Use the skimming spoon to turn the fish throughout cooking and to transfer the fish to the paper towel lined sheet tray. Sprinkle with salt and transfer the cooked fish to the oven to stay warm. Repeat this until all the fish is cooked.

To serve, arrange fish, chips and slaw on the plate. Serve tartar sauce on the side.

Your recipes are very complicated with a lot of ingredients. How about some simple to prepare recipes a la Jacques Pépin. That would be more useful to many of us.

[smile]Thanks! I'll be sure to give it a try!