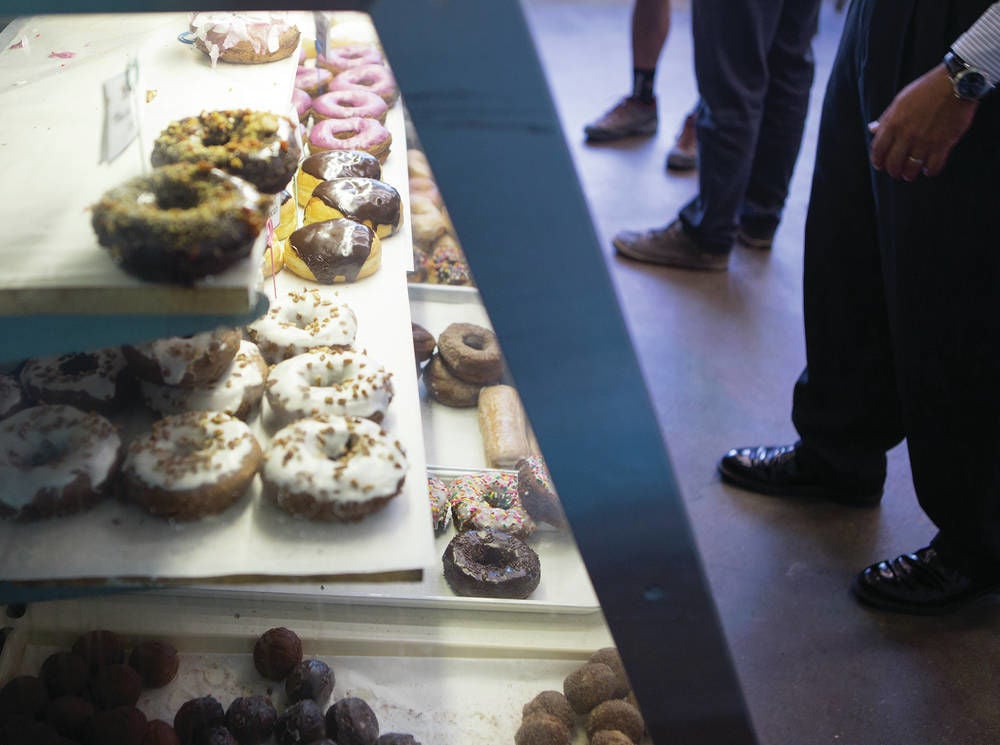 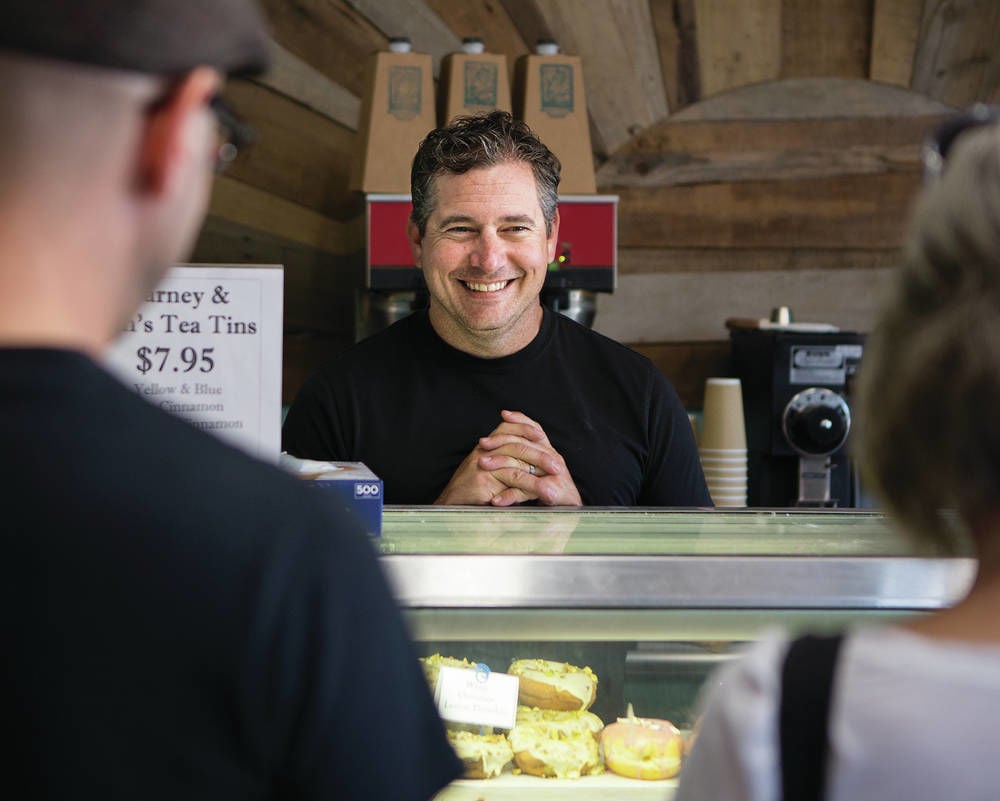 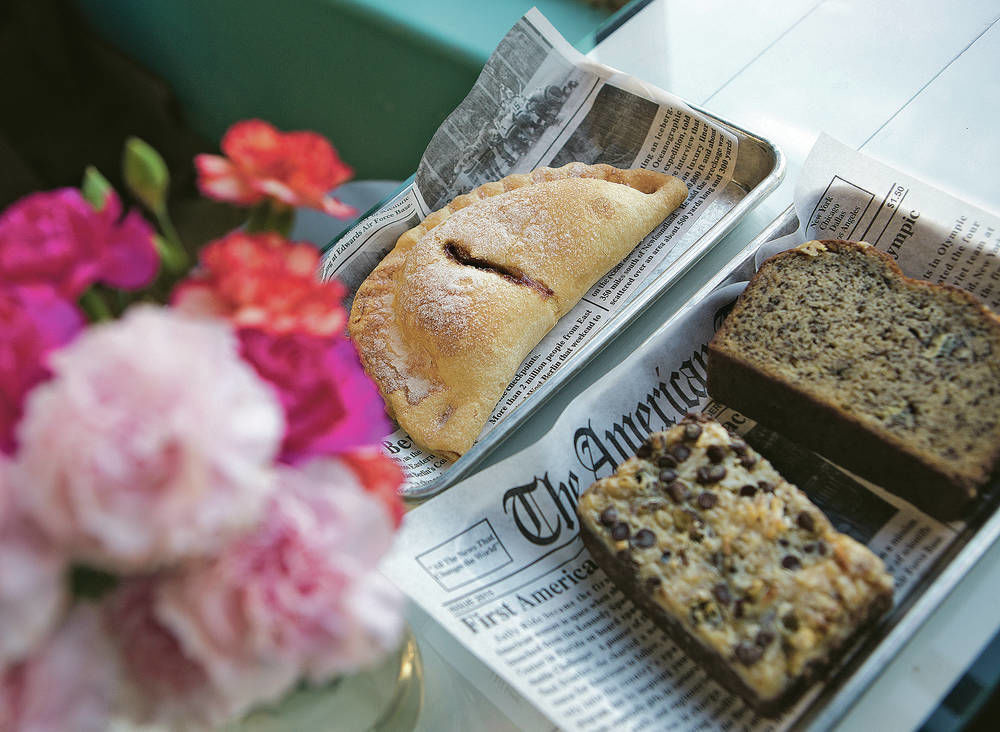 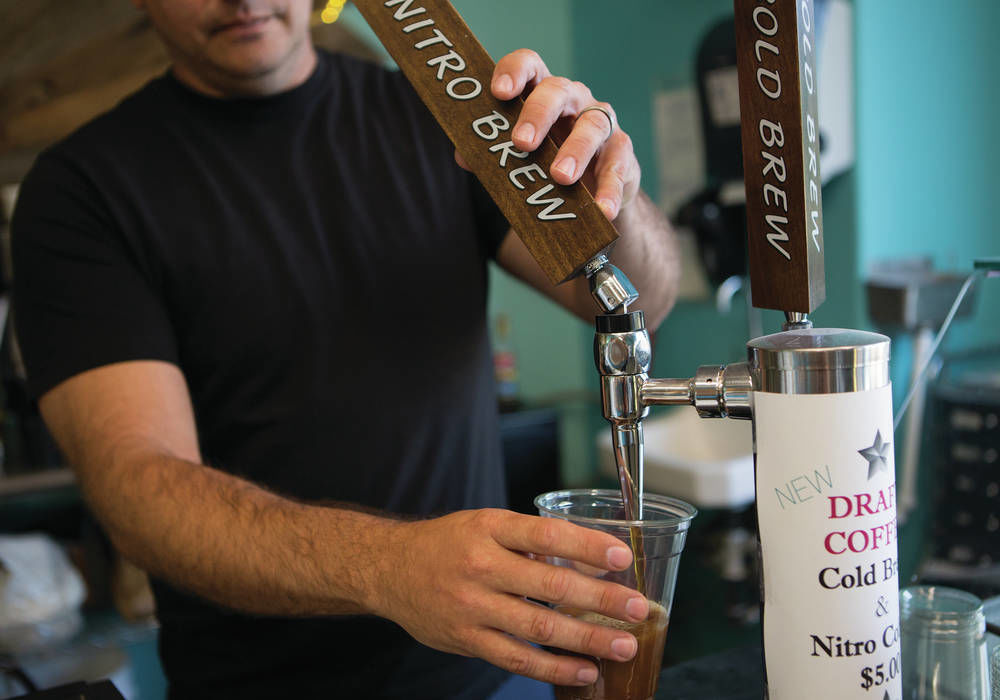 Whoo's nitro coffee was added TKmonth/year. Jeff Keenan, co-owner of the shop, says it was "an instant success" and has contributed to the business's growth. Olivia Harlow/The New Mexican 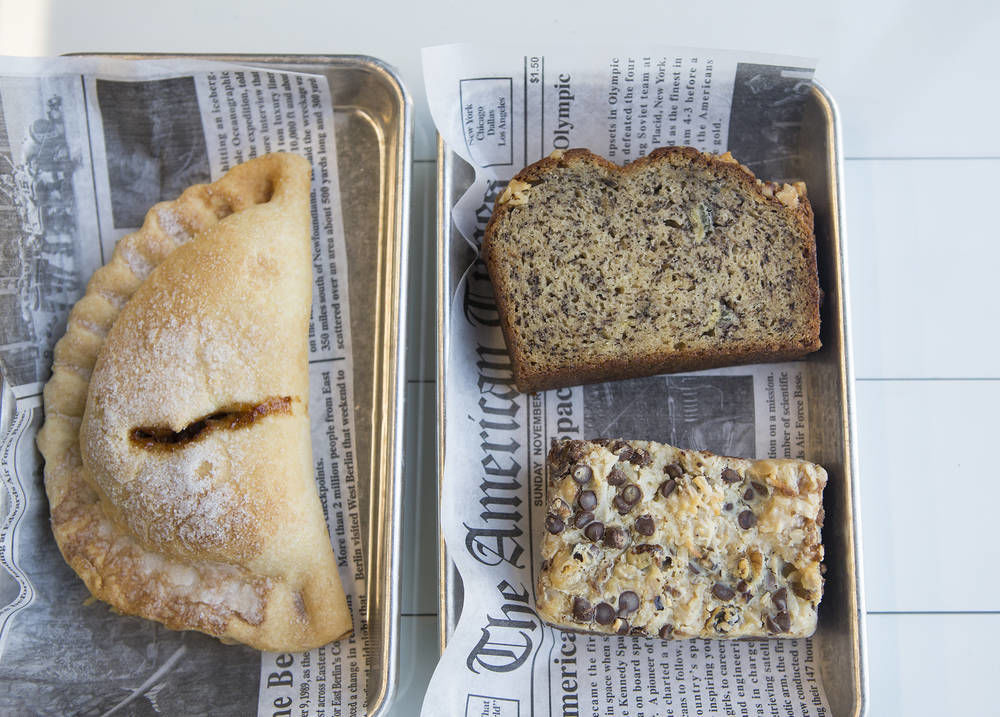 Whoo's nitro coffee was added TKmonth/year. Jeff Keenan, co-owner of the shop, says it was "an instant success" and has contributed to the business's growth. Olivia Harlow/The New Mexican

On Aug. 1, the owners of Whoo’s Donuts decided to expand their doughnut shop to a full bakery, adding a variety of pastries to their seemingly endless doughnut repertoire. Just two weeks after the decision, the shop racked a shelf full of baked goods and made its first pastry delivery, sending more than 3,000 fruity empanadas, flavored breads and gourmet granola bars to wholesale locations around the state.

In just more than a month, Whoo’s owners and employees have had to adjust to the chaos of adding a new production line, new equipment and staff members — all while sorting out quirks of an entirely different workflow. But the long shifts and backstage mayhem, they say, have been worth it.

“I’ve always enjoyed nurturing the business and watching it grow,” said Jeff Keenan, co-owner of Whoo’s and ChocolateSmith next door, adding that when Santa Fe bakery American Pie closed down, it was the perfect chance to expand. “You only get so many opportunities. … When an opportunity presents itself, you take it.”

But Keenan, who owns Whoo’s with his wife, Kari, said he knew they’d have to act quickly. They made their decision to act on the same day the other bakery announced it was closing.

“There was a void that needed to be filled,” Keenan said. “If we didn’t do it [start a bakery], someone else would.”

Whoo’s now produces an estimated 25,000 doughnuts and about 3,000 pastries each week. When the business opened in 2011, it took five years to reach its first 1 million doughnut sales, said Keenan, but now Whoo’s easily surpasses that number every year. After the first month as a full bakery, Keenan said Whoo’s is on track to produce about 100,000 pastries in the first year.

Progress, he says, is all about trial and error.

“We’ve screwed up in every possible way — but once,” he said, adding that mastering a freezing process, as well as balancing quick deadlines with no waste, has been a process. But these obstacles, Keenan says, are not only inevitable — they’re helpful. “You learn, you adjust, and you don’t do it again.”

On display at Whoo’s are dozens of doughnuts, ranging in flavor from creamy almond with cherry glaze, to decadent dark chocolate, maple bacon and the shop’s bestseller: blue corn blueberry lavender.

Every item produced, Keenan said, is made from scratch with top-notch ingredients.

“Most doughnuts across America are bag mix,” he said, adding that jams or pie fillings often are made with corn syrup and preservatives.

With the bakery expansion, Whoo’s — which relies on an estimated 70 percent wholesale and 30 percent retail sales — added 25 wholesale accounts to its system, all within the first two weeks, Keenan said. Whoo’s has around 50 wholesale customers, ranging from the Santa Fe Farmers Market to coffee shops in Albuquerque and grocery co-ops in Madrid and Taos. On Wednesday, Whoo’s will launch with Uber Eats.

“The bakery could be equally as big [as the doughnuts] because it reaches a different part of the market,” Keenan said. As time goes on, he said he expects to add more baked products to the menu.

Yet, he said Whoo’s is evolving in other ways, beyond fried dough and bakery items.

In seven years, Whoo’s has transformed from a three-person staff to a group of 19, four of whom were added specifically for the baked goods side of the business. They’ve supplied doughnuts to 30 Whole Foods stores across five states for about two years — “our biggest success but also our biggest challenge,” Keenan said — and over the years added gourmet caffeine fixes, including a draft nitro cold brew in July.

“We’ve upped our coffee game big time,” said Keenan, adding that the nitro coffee — “like drinking a Guinness” beer — was an “instant success.”

With the recent expansion, Keenan said the shop has added another shift, to accommodate for everything that needs to be done in their cozy space on Cerrillos Road. Whoo’s now operates on a 24-hour schedule, with overnight, delivery, prep and baking shifts.

“I definitely work a lot more now. … We are just getting past that learning curve,” said Efren Huerta III, 24, an employee since spring.

“I came in at 5 a.m. that first day [opening the full bakery], knowing it would be a long one,” Keenan said. He said he was in “such a blur” by the end of his shift that he can’t remember exactly what time he left, but he knows it was sometime after 9 p.m. the next day.

For the entire first week, he said, he was coming into work at 6 a.m. or earlier, and leaving around 8 p.m. or later. Afterward, he would head to a grocery or department store for anything the shop might need the following morning. Repeat.

“Most entrepreneurs will work 100 hours a week to avoid a 40-hour workweek,” he laughed, adding that he enjoys the creative freedom and independence of owning a business with his wife. Sometimes, work means selling doughnuts at the concession stand for his kids’ soccer teams — an overlap Keenan said he can’t help but enjoy. “My problem is I only see the upside to these new adventures.”

To Keenan, the reward is worth the effort.

“It’s much more work than most people think. It’s real work,” he said. “But it’s gratifying.”