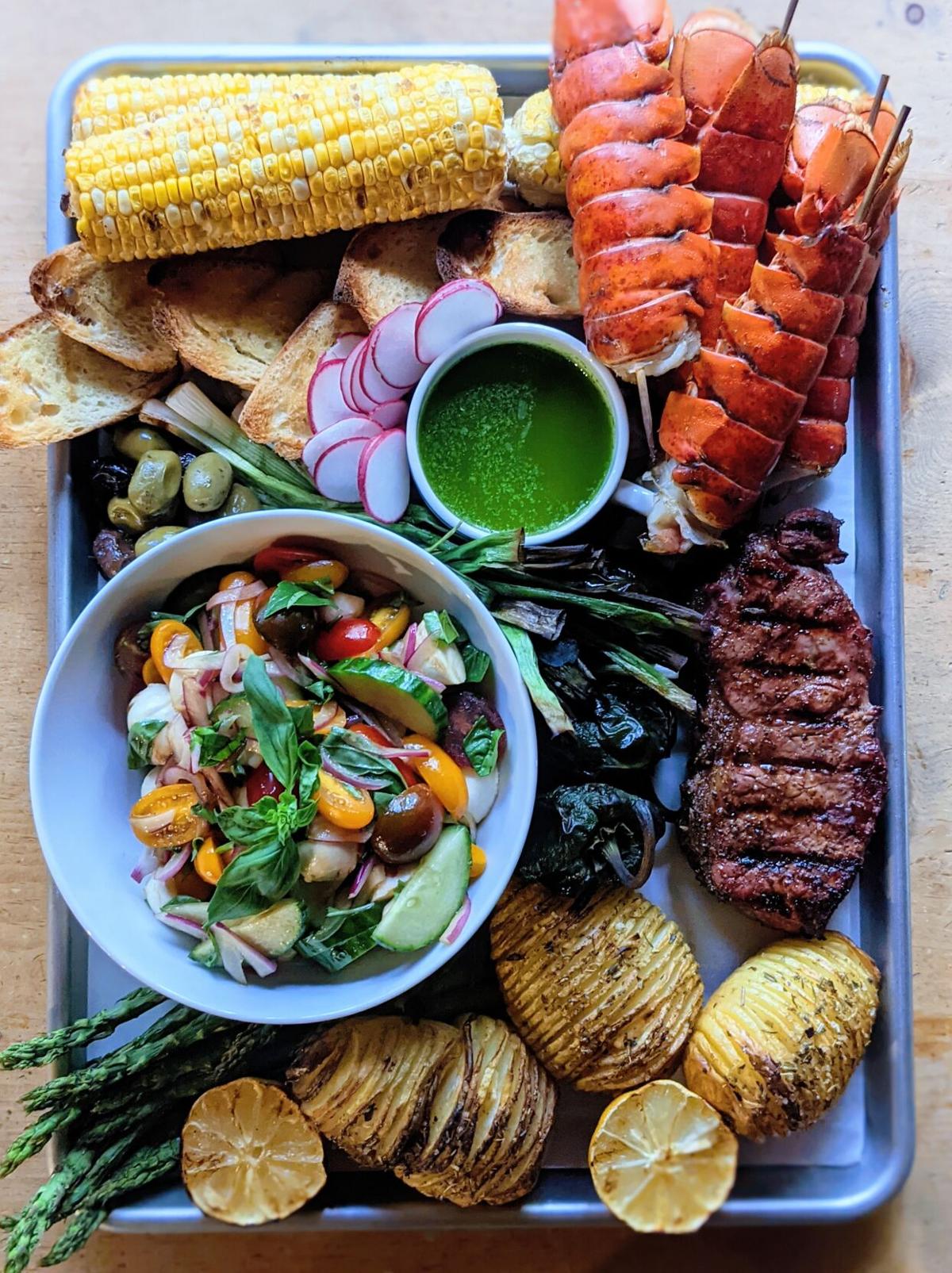 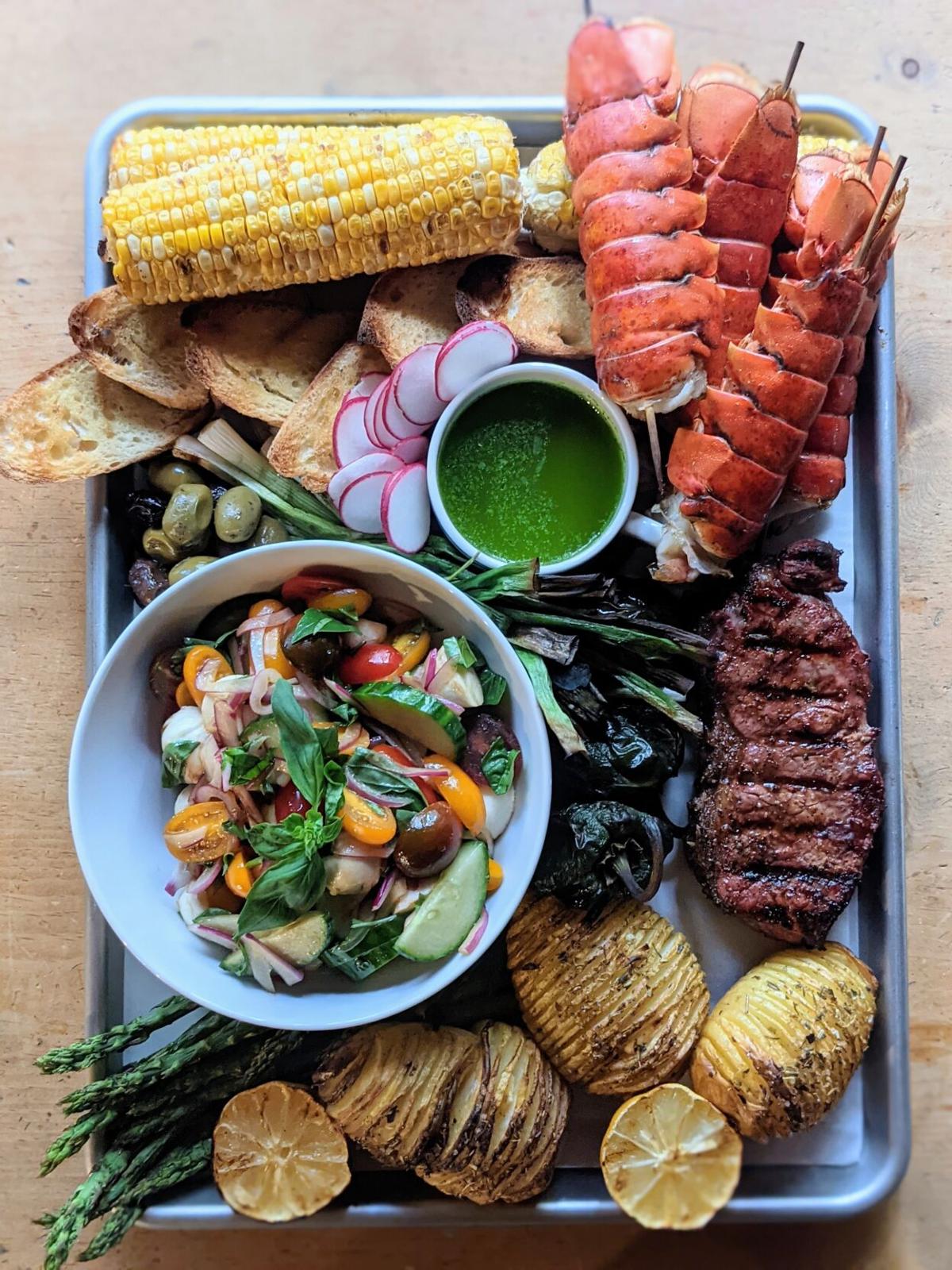 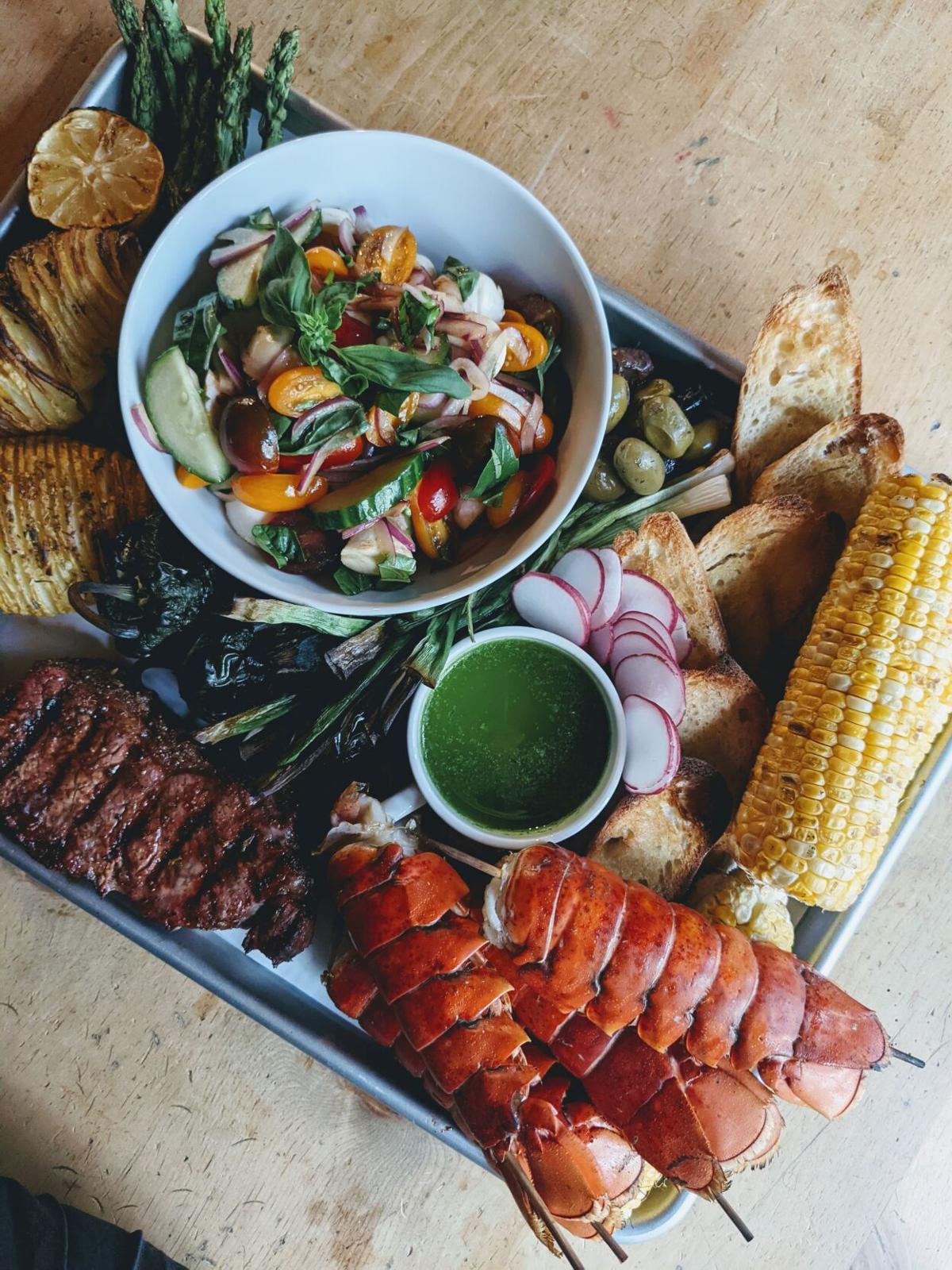 I recently made this platter for Father’s Day, and while I was hoping it would make my husband feel celebrated and spoiled, I didn’t expect it to be so easy to make.

I first drew out the idea on a piece of paper. I wanted it to be full of his favorite foods and also look as pretty as a bouquet of flowers. At first glance, it felt like a big project. The steak and lobster were the easy and extra-special parts, but what else? When the possibilities about what to make seem endless, it can feel overwhelming. But when you zoom into the season and what’s naturally in its prime time, things become easier and much more clear. So that’s what I did. I already had green onions, potatoes, poblano and jalapeños. I had olives. I had lemons. I decided on hasselback potatoes because it seemed an appropriate and holiday-esque nod to my husband’s Swedish heritage, and I chose the caprese salad because my basil plant, by some wonderful miracle, was thriving and, well, it’s summer.

I also want to mention that the steak and lobster could easily be swapped out for other proteins like brats, chicken, pork, lamb, other shellfish or fish. The meat could even be skipped altogether and more vegetables added, in which case I might add an additional dip like hummus and/or an herb and garlicky Greek yogurt to offer amid the swath of summer grilled vegetables.

The fun and easy way to put this platter together is to divide and conquer. One person grills while the other makes the potatoes, caprese salad and herb butter. But it can easily be made by one person, too. The salad and herb butter can be made the day before, and the potatoes can be prepped in advance and thrown in the oven an hour before meal time. Then all you have to do is throw the rest on the grill and enjoy the company of your family and friends.

For the herb butter:

2 sticks of unsalted butter or ghee

For the caprese salad:

1 baguette, sliced and each sliced brushed with herb butter

Olive oil or ghee for drizzling

1 bunch of radish or salad turnips, sliced or quartered

Preparation: Start by making the potatoes: Preheat the grill (according to manufacturer instructions) and the oven to 400 degrees. Line a baking sheet with parchment paper or foil and make quarter-inch slices about three-fourths the way down each potato. Insert the garlic slices and parmesan cheese into the slits. Drizzle with olive oil, dried herbs if you’re using any and salt and pepper. Bake for around 1 hour or until the potatoes are tender.

Make the herb butter: Over medium heat, melt the butter in a saucepan until it comes to a simmer. Add the garlic, parsley and chives. Turn off heat and let it stand for 5 minutes. Blend until smooth and reserve in a saucepan to be quickly warmed up right before serving.

Make the caprese salad: In a large bowl, whisk together the balsamic vinegar and extra-virgin olive oil. Add cherry tomatoes, shallots, cucumbers, basil and mozzarella with a pinch of salt and pepper. Gently toss until combined. Transfer to a serving bowl and refrigerate until ready to serve.

Start grilling: Season the steak with salt and pepper and grill to your preferred temperature. Rest the steak until ready to serve (7-10 minutes) before slicing. For the lobster there are a few options. You can leave the tails whole and insert a skewer alongside the top of the shell; you can split them by making a straight cut down the middle of the tail; or you can butterfly them by making a straight cut through the shell in front of the tail and splitting the lobster open, leaving the tail intact. Leaving the tails whole are the easiest, but splitting them and butterflying them allow you to baste the meat with butter while it’s cooking and infuse with more flavors from the grill. You want to cook the lobster tail until the shell is bright red, and the meat is white and feels firm to the touch. The internal temperature should be between 140 and 145 degrees. Just as important as not undercooking is to avoid overcooking, which will result in tough and rubbery lobster.

While the meat is resting, grill the bread and vegetables: Grill the corn for just a few minutes until starting to get some color on all sides. Drizzle the peppers with olive oil and a sprinkle of salt and grill until roasted on all sides. Place the lemons on the grill cut-side down and grill until they have a bit of char on the bottom. Drizzle the asparagus and green onions with olive oil, sprinkle with salt and grill for a few minutes until just tender but still vibrant green. Grill the bread until toasted on each side.

Build the platter: Place the bowls of caprese salad and warm herb butter on a large platter or sheet pan. Arrange the steak, lobster, vegetables, bread around the bowls, garnishing with lemons, olives and radishes. Enjoy!

Marianne Sundquist is a chef, writer and co-founded Stokli in 2020, an online general store on a mission to empower local growers and makers of dry goods. Find her on Instagram @chefmariannesundquist, visit stokli.com and email her at marianne@stokli.com.