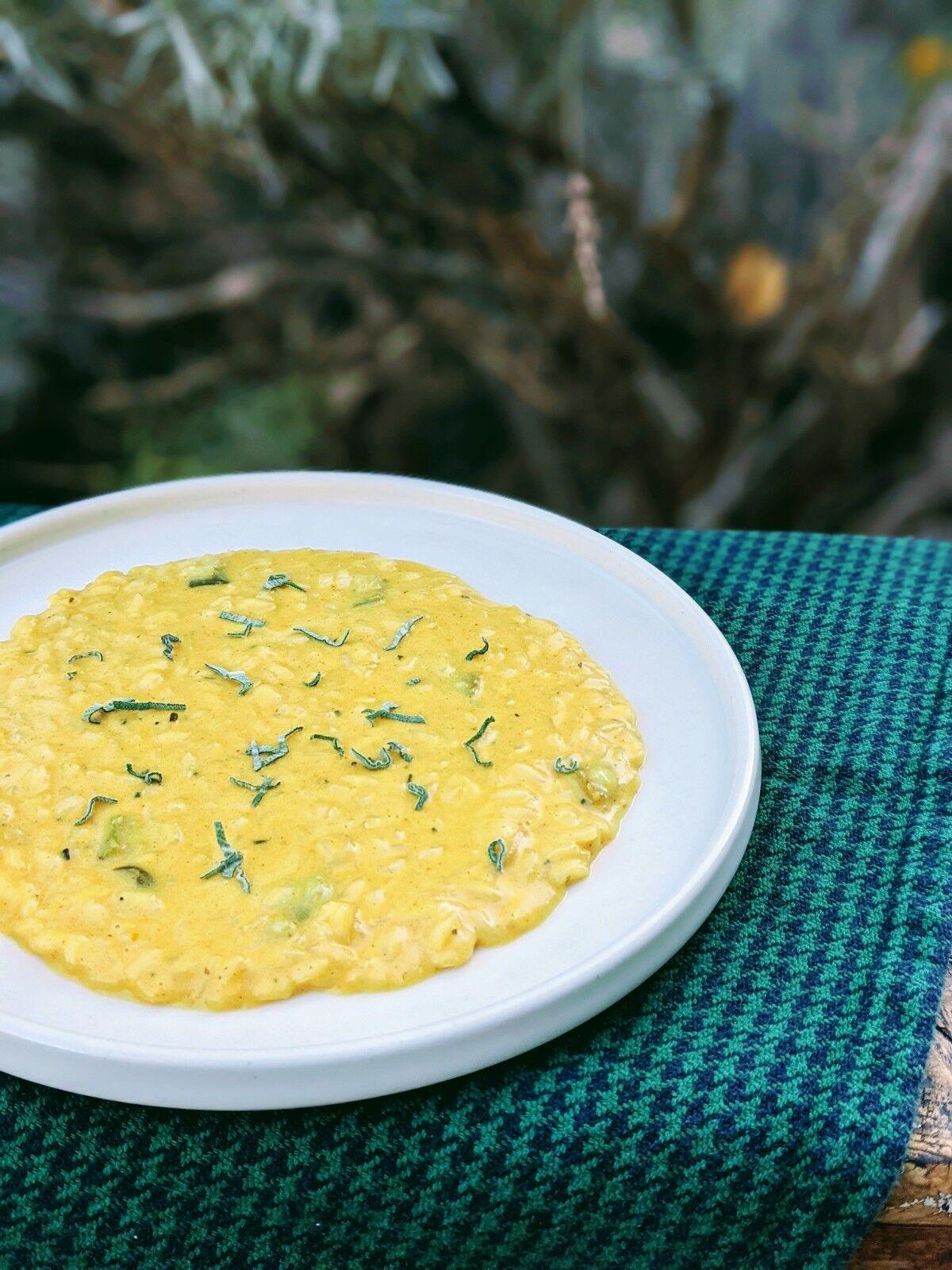 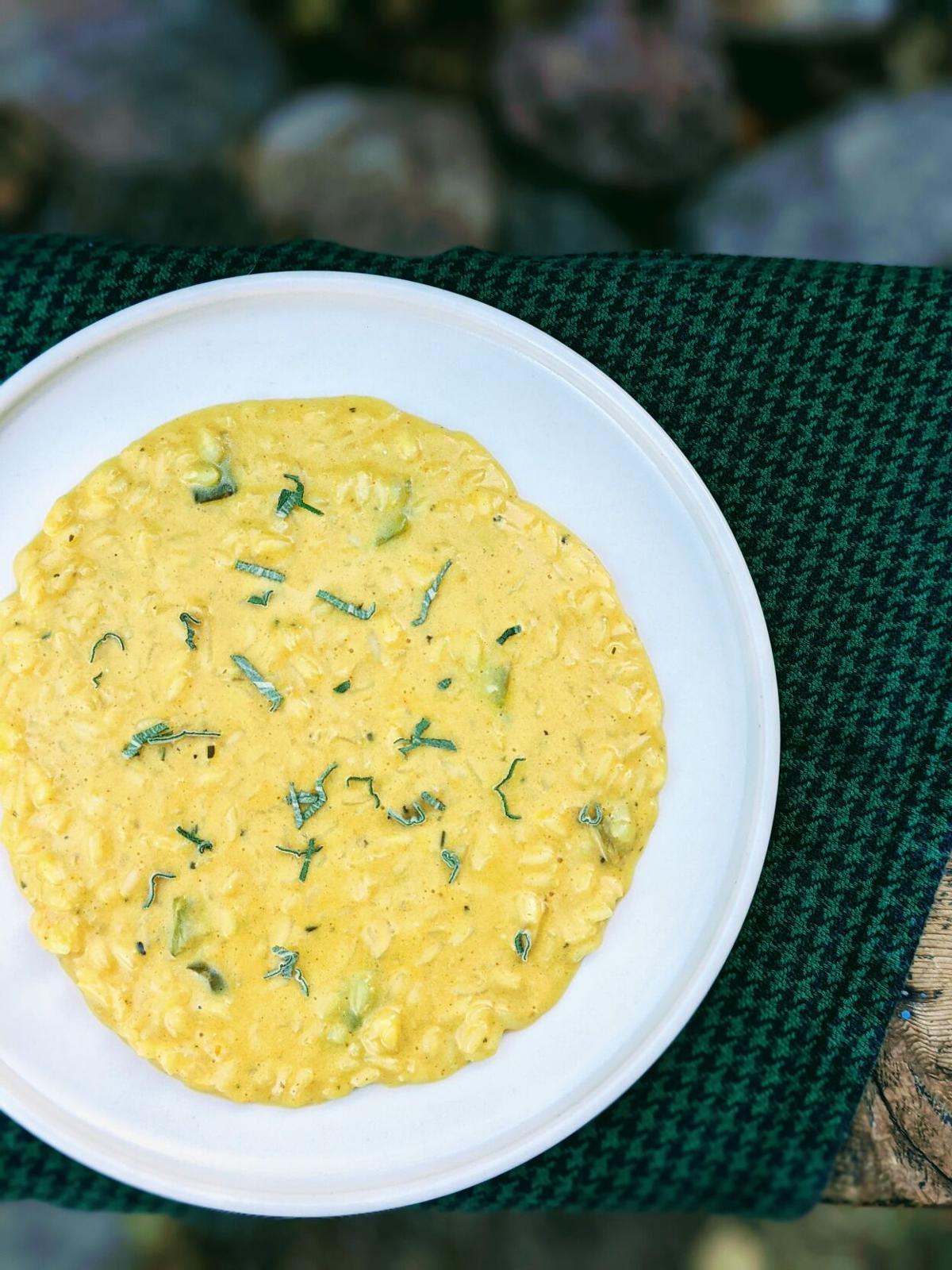 The joys of pumpkin are officially upon us, and aside from pie, risotto is one of my favorite ways to celebrate this fall staple.

My love for risotto started long ago. As a young cook working in a variety of restaurants, this was one of the dishes that was a prized assignment. I remember the first time I received the lucky and nerve-inducing privilege of making risotto at an Italian restaurant in Minneapolis, and even then it was only because the sous chef was on vacation. Years later, an Italian chef I worked for insisted we let the risotto stick to the bottom of the pan, creating a barrier between the heat source and the rice. Supposedly, after the rice has been served, it’s not uncommon for children in the house to fight over pieces of the caramelized and crispy rice stuck to the bottom of the pot.

One of the first things I learned was the importance of toasting the rice. In the recipe, you’ll notice the rice is toasted for around four minutes in the pot before adding liquid. This step creates a barrier around each grain of rice, allowing it to absorb liquid slowly and retain its texture without becoming sticky.

Once I made the move to American kitchens, I learned a little trick that to this day is one of my favorite cooking pro tips of all time: At the very last minute, after everyone has gathered to the table and you are seconds away from serving, fold in some (unsweetened) freshly whipped cream. This adds an airy, ethereal texture. Here with the brown butter and pumpkin, it makes a saucy finishing touch that is out-of-this-world delicious.

In restaurant kitchens, everything is a blur of constant activity. But when making risotto, moving quickly doesn’t work. If you do not make the time to stand still, watching over the rice as you stir it in the pot and slowly feed it broth, it won’t end well. This is the only detail that can sometimes create the illusion that risotto is hard. But in reality, it’s one of the easiest, most delightful and hearty fall dishes you could make.

This can be served on its own (preferably on a warm plate) or topped with wild mushrooms or other roasted vegetables. Last week, I even made a batch to top with red wine-braised short ribs. Before you begin, collect your mise en place (all of your ingredients). You might feel like you are preparing for your own cooking show, but what this really does is make risotto cooking easy and fun.

For the brown butter broth:

For the caramelized onions:

Preparation: First make the broth: In a large stock pot over medium heat, add the butter. Keep a close eye on it as it melts, then foams, then starts to turn a golden brown. Once the butter has turned a deep golden brown (but not burned), add the pumpkin purée, broth and salt. Whisk together and bring to a simmer, then turn the heat to low while you prepare the risotto.

In a large and wide, heavy-bottomed pot over medium heat, add the butter. Once it melts, add the onion. We are going to let the onions caramelize, so this will take some time. Let the onions cook in the butter over low heat, stirring frequently with a wooden spoon, until they are golden brown. This will take 30-45 minutes. If it seems they are cooking unevenly or you see some dark spots, add a splash of the pumpkin broth to scrape the bottom of the pan and continue cooking the onions until they have caramelized.

Add the garlic, rosemary and poblano peppers. Cook for another minute or two. Now add the rice and cook for around four minutes, stirring frequently. Add the white wine and let cook until most of the liquid has evaporated.

At this point add a cup of the hot pumpkin broth to the rice and stir frequently. Over time, the rice will absorb the broth and you can add another cup, continuing to stir and add broth until the rice has almost fully absorbed all the broth and is al dente, meaning it is cooked but still retains a relatively firm bite. Add the Parmesan cheese and stir for a minute. Now, right before serving (and by this I mean everyone has found their seats at the table), add all of the freshly whipped cream. Fold the cream into the risotto with a large heat proof spatula, letting as much air transfer to the risotto. Give it a taste and add salt and/or pepper as needed.

To serve, spoon the risotto on a large plate. Shake the plate until the risotto is spread flat and garnish with sage.

Marianne Sundquist is a chef and writer who in 2020 co-founded Stokli, an online general store. Find her on Instagram @chefmariannesundquist, and email her at marianne@stokli.com.