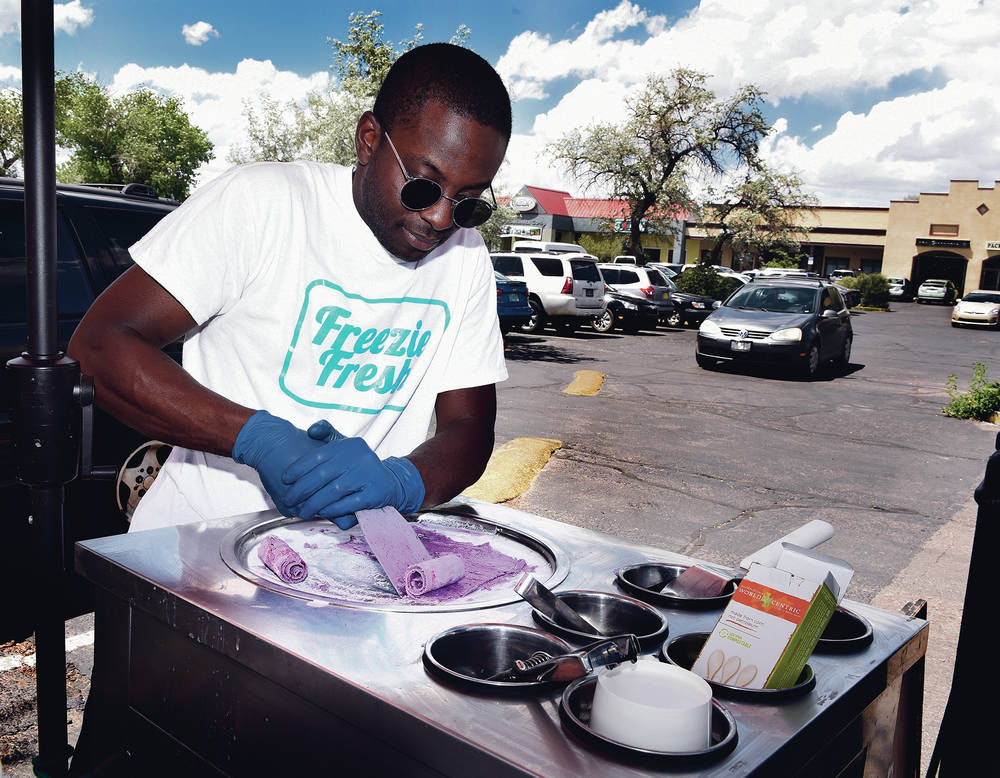 Xzavian Cookbey of Freezie Fresh, makes one of his more popular menu items, a Blueberry Bliss serving at his food cart at the Solana Center. Clyde Mueller/The New Mexican 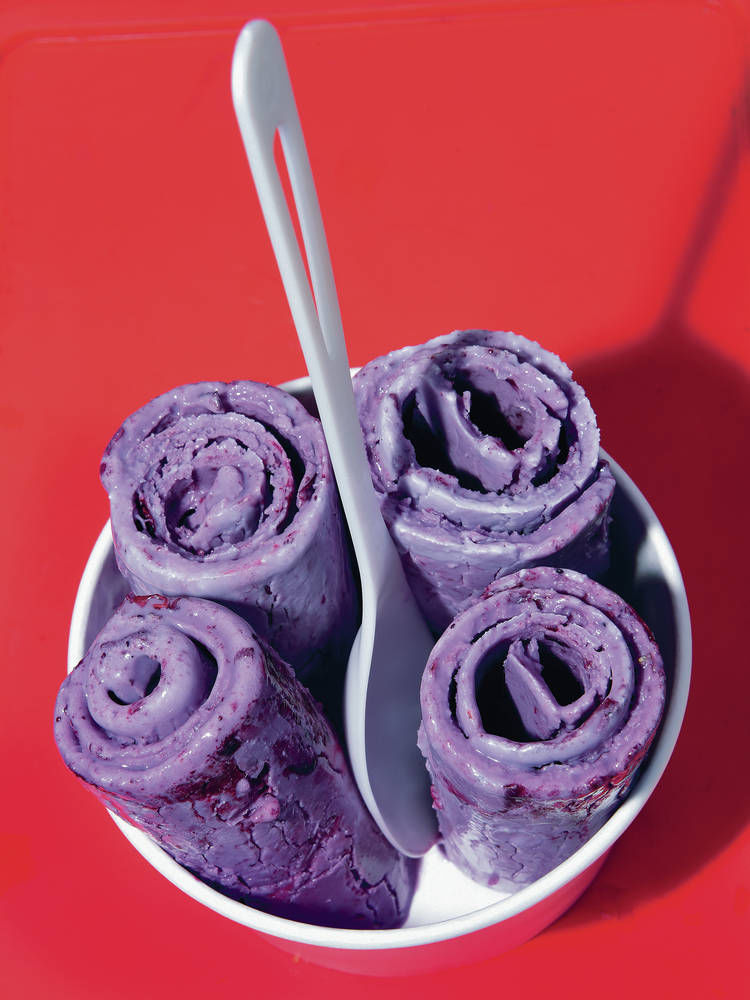 Xzavian Cookbey of Freezie Fresh makes one of his more popular ice creams, Blueberry Bliss, below, at his food cart at the Solana Center this week. Photos by Clyde Mueller The New Mexican 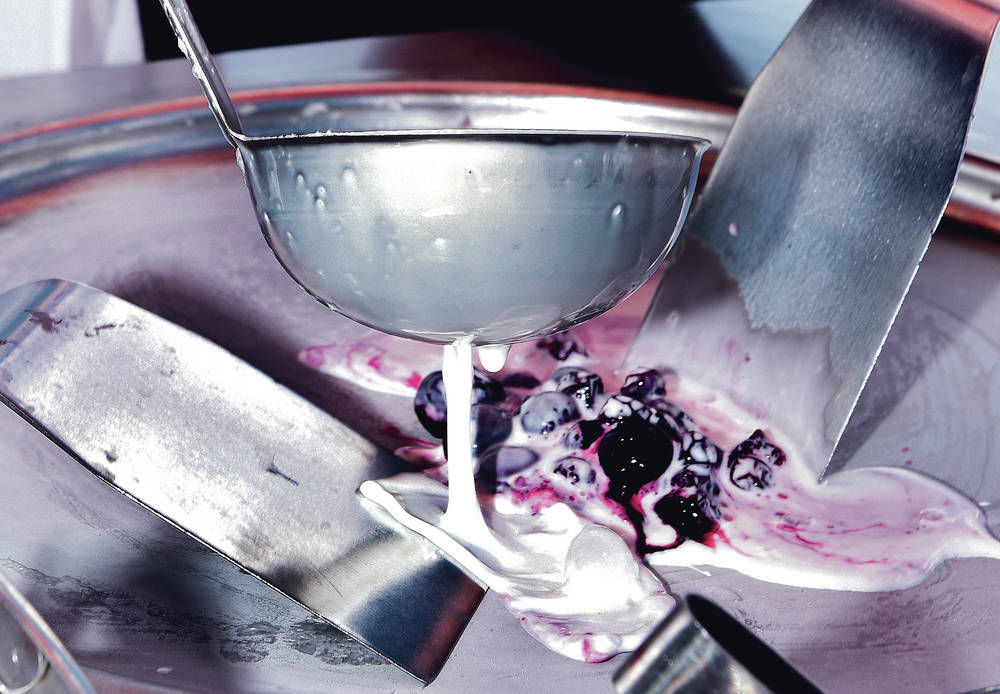 Cookbey pours his custard mixture onto his blueberry compote on his chilled steel plate before quickly mixing it into ice cream. ‘Stir fried’ ice cream is popular street food in Asia.

Xzavian Cookbey of Freezie Fresh, makes one of his more popular menu items, a Blueberry Bliss serving at his food cart at the Solana Center. Clyde Mueller/The New Mexican

Xzavian Cookbey of Freezie Fresh makes one of his more popular ice creams, Blueberry Bliss, below, at his food cart at the Solana Center this week. Photos by Clyde Mueller The New Mexican

Cookbey pours his custard mixture onto his blueberry compote on his chilled steel plate before quickly mixing it into ice cream. ‘Stir fried’ ice cream is popular street food in Asia.

Under a brightly striped umbrella in a corner of the Solana Center parking lot is a man named Xzavian Cookbey who, every day during warm weather, makes instant ice cream.

This may sound odd; the process of freezing usually takes at least a little bit of time — usually about 30 minutes in a machine. But Cookbey, under the banner of Freezie Fresh, is making the fastest ice cream in the West.

Via a process from the Far East.

This ice cream is not, by the way, fried at all. There is no heat, there is no oil, and actually, as ice cream goes, Cookbey’s is arguably somewhat virtuous. Stir-fried ice cream requires just some light equipment, a custard base and a small pantry of ingredients. The machine basically is a freezer on wheels with a steel plate on the top that is chilled to somewhere between minus-18 and minus-35 degrees Celsius. A wet custard of egg, cream, sugar and vanilla is poured directly onto the steel surface and the ingredients added in, and then the “cook” chops up the ingredients with the swiftly solidifying custard using two steel spatulas.

The cream begins to solidify immediately, making it essential to continuously (and theatrically) agitate it to keep it from getting clumpy, chopping it and smearing it around to cause it to freeze evenly (the motion that suggests the name “stir-fried” ice cream). Finally, the ice cream is spread in a thin sheet across the plate, allowed to freeze there for a second, and then scraped off using the spatulas into perfect coils that are placed in a cup like little rosettes. The process is fast, mesmerizing, entertaining and takes practice to perfect, and you can find some particularly acrobatic ice cream stir-frying videos on YouTube.

“I bought [the cart] and started practicing at home and experimenting with different recipes, making it for my roommates every other night,” Cookbey says. “It was three months of me just trying to make it quickly, to see how fast I could do it.”

The concept of to-order “mix-ins” for ice cream might be more familiar to Americans via Cold Stone Creamery, which offers a variety of cookies, fruit and other toppings chopped into ice cream flavors on demand on a frozen granite slab. But unlike at Cold Stone, with stir-fried ice cream, the ice cream itself is made to order in about a minute and a half. Freezie Fresh offers a generous small serving for $4.50, with a medium $6.50 and a large serving $8.50.

Stir-fried ice cream carts are not yet ubiquitous stateside except for in New York (where all things can be found, all the time), and Cookbey ordered his through the company that popularized it in the U.S., Ten Below. Cookbey is not, despite his name, a cook. He is actually an independent film producer. Originally from Houston, Cookbey is a recent Santa Fe University of Art and Design film school graduate (class of 2015) and has several projects in the offing, including a drama/satire produced as a thesis film called The Muser, written and directed by his friend, Jehad N. Al-Khateeb. But the road to independent film success is dark and full of terrors, and it helps to have a flexible day job until Sundance success.

Cookbey actually got the idea to go into the mobile food business from his friend and then-co-worker Zach Levy. Both worked at La Montañita Co-op together, and after Levy left the store to open his Egg Woah Yeah egg roll food truck (which has since moved to Taos), Cookbey decided to follow his path.

Initially, though, what he wanted to do was baked potatoes.

“I figured, I enjoy baked potatoes. Other people might enjoy baked potatoes as well,” he says. But then a friend’s Snapchat (millennials, right?) of a New York fried ice cream cart gave him another, even less expensive, option (although the baked potato food truck is a fantastic idea and, thankfully, it is next on Cookbey’s list).

While many ice cream roll carts offer cookies, brownies, etc. as mix-ins, Cookbey is keeping things mostly fresh and light for now, focusing on fruit compotes that he makes himself in a commissary kitchen (just seasonal fruit, sugar and a little water), such as strawberry and banana, and of course chocolate, which is prepared like a fudge and then gets chopped into the custard as it freezes. But Cookbey likes to experiment with flavors as well as humor customer requests, so next week he’ll begin to add a suite of new flavors, including salted caramel, matcha green tea and Thai tea. Freezie Fresh also is available to book for events, weddings, birthday parties, bar mitzvahs — anywhere that could use some ice cream.

Where: The Solana Center parking lot on West Alameda