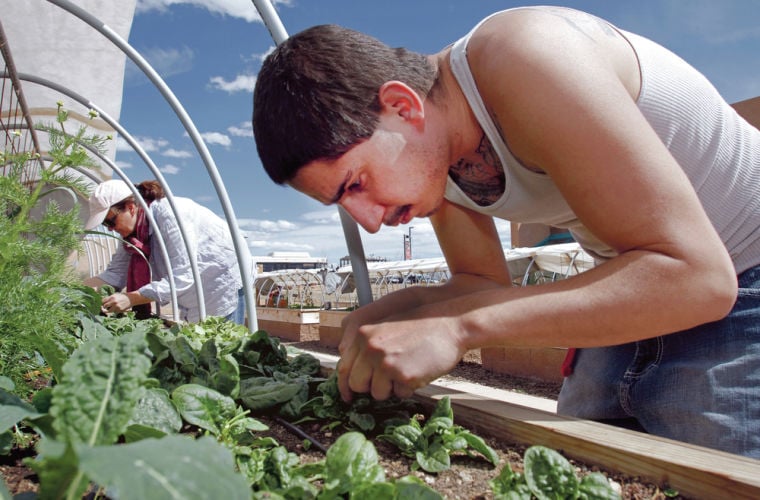 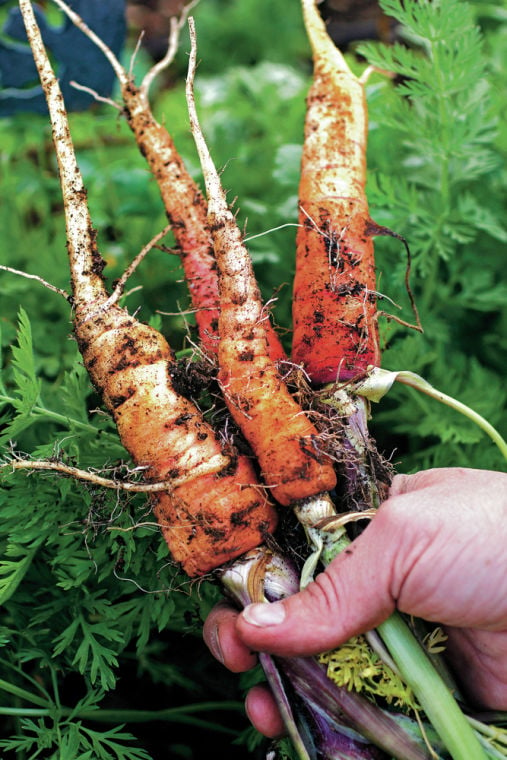 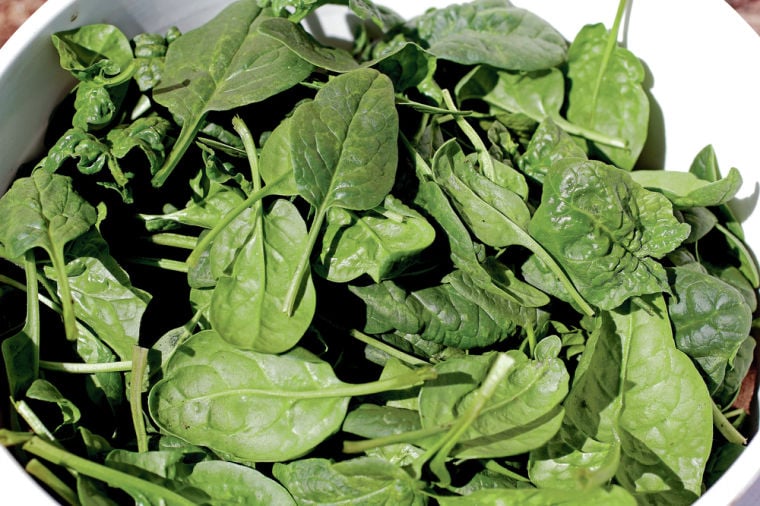 Elea Flowers waters garlic Friday at the Culinary Arts Garden on the Santa Fe Community College campus. From 1 to 4 p.m. every Friday, both student and community volunteers are welcomed to help harvest and plant at the garden. Jane Phillips/The New Mexican

When Erin O’Neill “found nature” as a young student at a boarding school in New Hampshire, she “bloomed.” And so she began her life’s calling as a career gardener, who has worked tirelessly to reconnect people to nature since she was 13 years old.

After boarding school, O’Neill, a native of Pennsylvania, found herself in Guatemala and India, where she helped women develop small-scale agriculture systems so they could feed their families and care for themselves through food.

“When I came back to the U.S.,” she said, “I was despaired to see people hungry and suffering from climate change and the globalization of rural-urban migration.”

In 2000, O’Neill moved to Santa Fe, where she continued her work in educational gardening in various capacities, most recently as the garden consultant for the Culinary Arts Garden on the Santa Fe Community College campus.

Last Wednesday, the garden was honored with a Sustainable Santa Fe award as an innovative food production system, and O’Neill was recognized for her dedicated efforts at the college.

“It’s been a huge gift for us because we needed a launching point,” O’Neill said of the award. “I want Santa Fe Community College put on the map as a resource for semiarid agroecology — and I want to make farming sexy again!”

But before the 16-bed garden and 21-tree fruit orchard came to fruition, it was “just an empty dirt courtyard” outside the East Wing Eatery. Its evolution into an award-winning food production system began several years ago, O’Neill said.

In 2011, O’Neill said, the vision for the garden started to take shape. Instructors within the Culinary Arts Department, including chefs Michelle Roetzer and Tanya Story — who left the college in 2012 to co-found the Santa Fe Culinary Academy — wanted to create an educational garden program in which students could grow their own food, harvest it and then cook it.

“My initial vision was to watch students peel carrots, then take the carrot peel and compost it [and] use the soil to then grow more carrots,” said Roetzer, who currently serves as the lead instructor for the department. “To me, that is the ideal. Where else but on a small campus can we reach for the ideal, and then see it happen?”

Soon after, the project gained support from the college’s then-vice president of finance and administration, Meridee Walters, who secured funding for the garden.

The total cost of garden was $134,669, which was paid for with money allocated from a general obligation bond passed in 2010, said Laura Mulry, assistant executive director of marketing and public relations at SFCC.

Both O’Neill and Roetzer give much credit to Walters, who no longer works at the college, and her former assistant, Linda Cassel, for playing instrumental roles in getting the garden off the ground.

“Meridee was a powerhouse on the SFCC campus,” Roetzer said. “She pushed and pushed to get the garden to happen. She drove from the administrative side and found the funds to make the dream of a garden a reality. Her input and presence is greatly missed.”

When funding was secured, O’Neill was brought on board to help the garden take root — literally — as part of the preliminary design team. Before joining the college, she oversaw the garden program at Monte del Sol Charter School. And before that, she ran the garden at the Children’s Museum.

As part of the design team, O’Neill was tasked to plot out the entire garden, which included “a little of everything. So we have these raised garden beds, and we have in-ground gardening over here. There’s also a pollinator garden and, of course, the orchard.”

By November 2012, construction of the garden was complete, and O’Neill and her students began planting transplants, and before the following spring, they began harvesting crops by the pound — all of which went to the Culinary Arts Department for use by students in their restaurant.

“My students now are using the spinach that was harvested on Friday and putting it into quiches, [which] we then sell at the student-run East Wing Eatery,” Roetzer said. “The garden added a new dimension to teaching about sustainability in kitchens. We are a living example of how we can take an idea and make it happen. We compost, we recycle and we grow an increasing amount of our own produce.”

As explained by O’Neill, “In nature, there’s natural successions. The first [plants] to come up are the pioneer species, which cover bare grounds fast and attract animals, who then poop and create fertile land.

“Here, we had a bare-empty lot,” she continued, “and the idea was to build a garden to attract the masses and show people that we’re able to grow food fast and beautifully. So this is what we call the pioneer phase.”

But creating an environment fit for pioneer species on the campus required some imported material, O’Neill said. “Rather than building from the ground up, or ‘building the soil,’ which takes a long time, we basically brought in everything, including the boxes and soil.”

Those “boxes,” or raised beds constructed out of concrete blocks, red cedar from Vancouver and plastic conduit, were designed by Ken Kuhne of Grow Y’Own. O’Neill said many of the beds are powered with incandescent light bulbs that automatically turn on when temperatures fall below 38 degrees, ensuring that the plants never freeze — even during the winter.

Additionally, each bed is 3 feet deep and is filled to capacity with handmade soil, O’Neill said. “This soil mix is top of the line. I mean, it’s like the magic mix."

According to O’Neill, these “top-notch, intensive mini-greenhouses” provide an optimal habitat for pioneers species. “They produce a lot of food really fast, they’re easy to use and they’re super generous. Right here and now, we’re proving that you can, in fact, grow a lot of food in a very small space in the desert.”

“We want this to be a demonstration garden with a lot of different models, so that people with varying capacities and financial abilities can grow food in different ways,” she said. “Also, we want the fast and we want the slow because as Earth citizens, we need to be building and creating soil — that’s part of our responsibility.”

For now, though, O’Neill is content with the deluge of greens coming off the raised beds.

In about a month, O’Neill, who also teaches a continuing-education class on gardening at SFCC, said she’ll begin to plant warm-season crops, including peppers, eggplant, tomatoes, basil, squash, cucumbers and melons.

Since the crop yield is so high, and because O’Neill is the sole faculty member in charge of the garden, she’s always in need of volunteers to help harvest and plant.

From 1 to 4 p.m. every Friday, volunteers meet at the garden and work under the direction of O’Neill. Although tasks change from week to week, the work usually involves harvesting and seeding, she said. A few weeks ago, however, volunteers also received lessons in tree pruning.

“Most of the time, I try to teach people what we’re doing,” she said. “If you volunteer enough, you learn what’s in season and how to harvest things. Again, this is a learning garden, so the main goal is education.”

O’Neill said both students and community members of all ages are welcome to volunteer. On average, she said, about five to 10 people volunteer each week, and she’d like to see that number increase.

“I’m 100 percent dependent on community volunteers and students,” she said. “Any student or person who is on the campus should come to the garden. It’s a great place for cross pollination for the community.”

For sustainable technologies student Matthew Encinias, who has volunteered for two semesters, the garden is a source of accomplishment and pride.

“When I produce my own food,” Encinias said, “I feel happier, and it gives me a sense of self-worth. I feel more connected to the world around me when I’m in this garden.”

But perhaps what Encinias enjoys most about the garden is the fact that his daughter is able to join him on occasion when he volunteers. He said he uses that time to teach her as much about gardening as he can.

“My little girl comes out to help sometimes. One time, she plucked a cucumber herself, and she loved it,” he said. “That’s what I like about the garden: It’s a great learning opportunity not just for the current students but also for future students — and future generations, like my daughter.”

When: Gardening hours, 1 to 4 p.m. every Friday