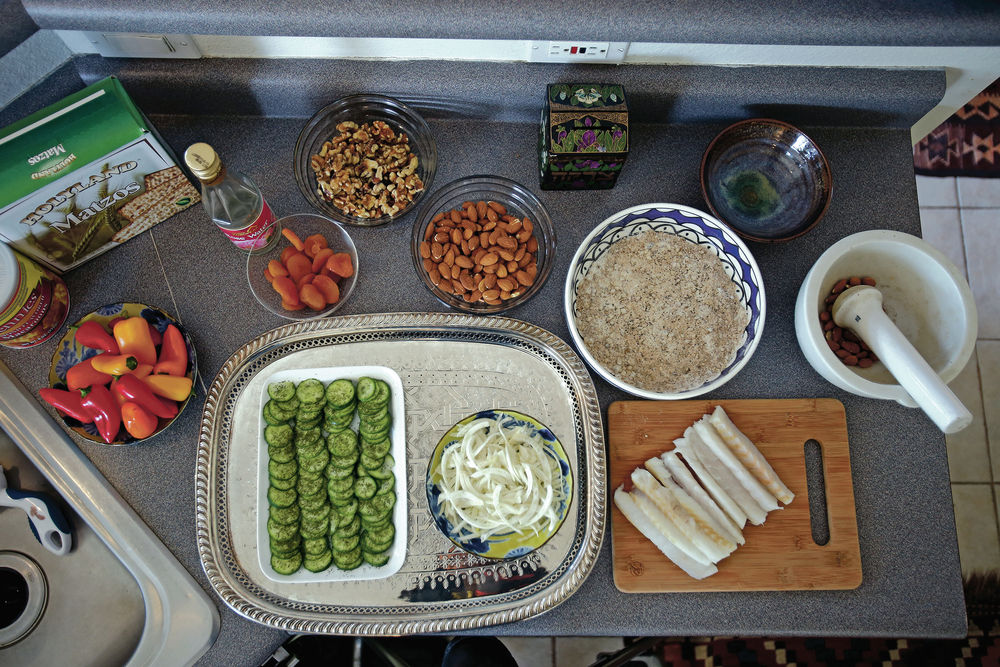 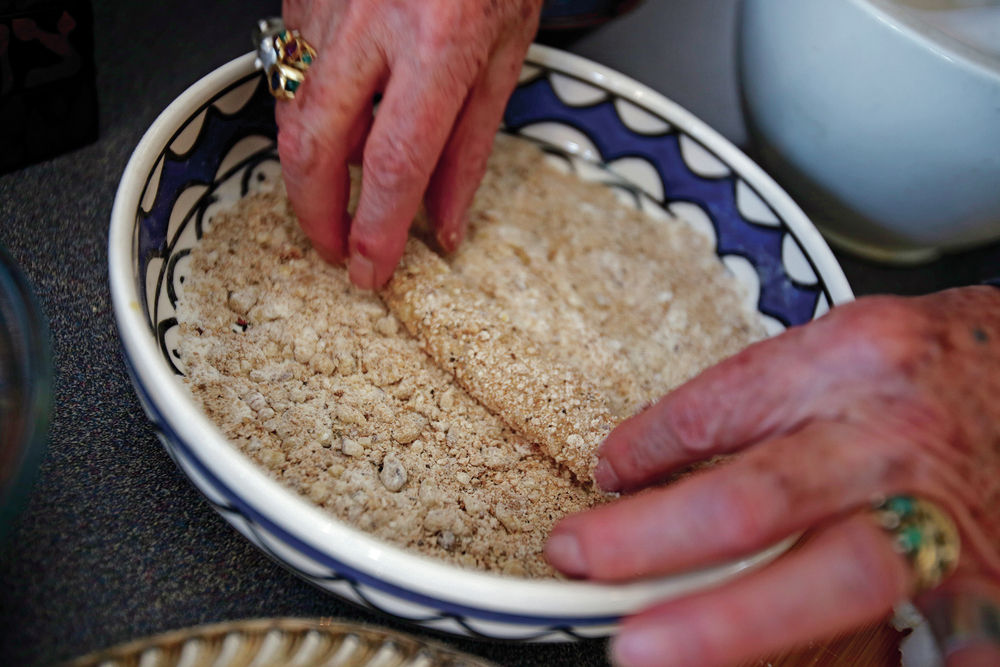 LEFT: Gloria Abella Ballen breads white fish last week at her home. ‘One of my earliest visual memories of the Passover kitchen was soaking thin strips of white fish in the egg white and breading with matzo meal,’ she said.BELOW: Passover foods ready for preparation. 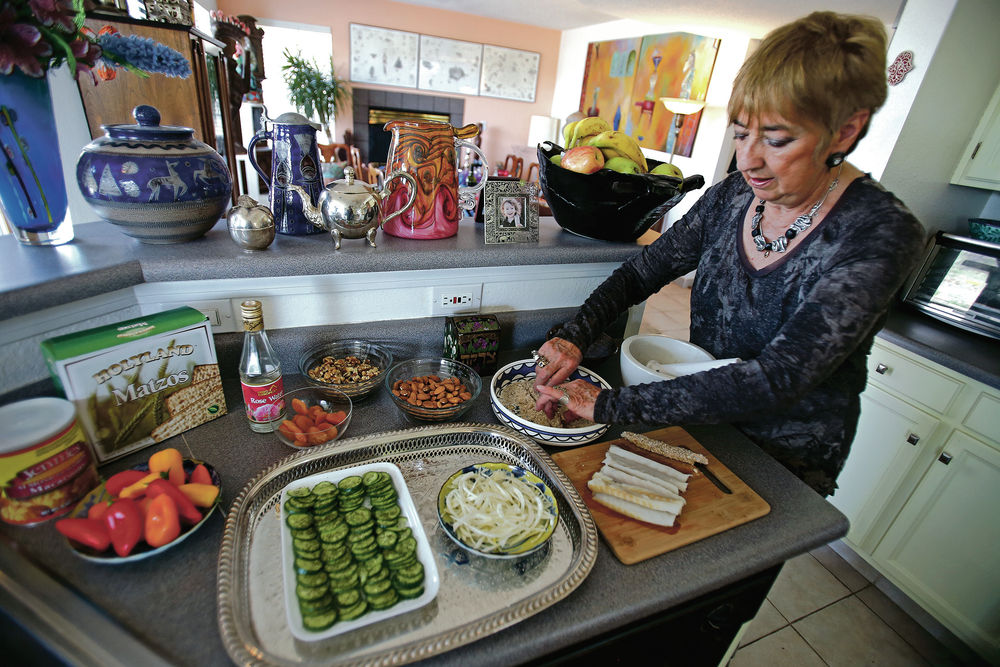 Gloria Abella Ballen, who grew up in a Sephardic household in Colombia, has her Passover table set. Photos by Luis Sánchez Saturno/The New Mexican

LEFT: Gloria Abella Ballen breads white fish last week at her home. ‘One of my earliest visual memories of the Passover kitchen was soaking thin strips of white fish in the egg white and breading with matzo meal,’ she said.BELOW: Passover foods ready for preparation.

Food holds a special place in the celebration of Passover, which begins at sundown Friday. The Seder meal kicks off the eight-day festival commemorating the liberation of the Israelites from Egyptian bondage as written in the Hebrew Scriptures in the Book of Exodus.

During the Seder, each dish evokes meaning and tells the story of Passover. For Gloria Abella Ballen, who lives in Santa Fe and grew up in a Sephardic household in Bogotá, Colombia, the Seder meal is shaped by traditions ingrained since childhood and includes touches of the New World.

“As a young girl, my favorite holiday was Passover because of the Seder meal,” said Abella Ballen, an award-winning artist, professor, lecturer and author.

“I remember the aromatic scents of cloves, dill, cinnamon, rose water and lamb wafting through the air used to create the symbolic meal.”

On Friday, Abella Ballen will prepare her Colombian Sephardic Passover meal, which has some preparations and ingredients that differ from those of Ashkenazi Jews of central or Eastern European descent.

Sephardic Jews, who originated from the Iberian Peninsula, fled during mandatory expulsions after a 1492 edict by Spain’s King Ferdinand ordering all Muslims and Jews to leave the country or convert to Catholicism. Many later settled in Spanish-speaking areas of the New World, including what is now New Mexico, and continued their traditions.

“My family fled to Tetouan, a town in northern Morocco, then moved to Colombia,” said Abella Ballen, who moved to Santa Fe with her husband in the 1990s.

For Ashkenazi and Sephardic Jews, the Seder meal begins with matzo. “We take three pieces of matzo and place them on top of each other wrapped in a cloth,” she said.

Alongside the matzo is the Seder plate. First, there is the zeroah, or lamb shank bone, representing the Paschal sacrifice on the eve of the exodus from Egypt. However, in addition to the lamb shank bone in the Sephardic tradition, “we eat lamb as the main meal, and it tastes divine,” Abella Ballen said. Traditionally, Ashkenazi Jews would serve a brisket or chicken as a main dish.

Next, the beitza, or hard-boiled egg, represents renewal and the sacrifice offered at the temple on the eve of Passover. It also illustrates the sadness over the destruction of the Holy Temple. “We cook our eggs on a low heat with the skins of red onions for many hours until they are a golden brown. This dish is called, Huevos Haminados (meaning oven or brown eggs),” she said. “Most Ashkenazis will boil the eggs.”

Karpas, meaning a green vegetable, symbolizes the arrival of spring. “Sephardim eat celery,” she said. “The Ashkenazi use parsley.” The karpas is then dipped into a bowl of vinegar to represent the tears of the Jews. However, “Ashkenazi Jews use saltwater,” she said.

Maror and hazeret are the bitter herbs on the plate, reminders of the bitterness of the slavery those in Egypt experienced. “Ashkenazi serve horseradish, while Sephardic use endive or romaine lettuce,” Abella Ballen said.

Next is the charoset (derived from the Hebrew word “cheres,” meaning clay), symbolizing the brick and mortar used by the Jews to build Egyptian cities. There are many different Sephardic charosets. “I make mine with dates, figs and oranges soaked in red kosher wine the night before,” Abella Ballen said, “then, I add walnuts and almonds. Ashkenazi recipes may use apples, walnuts and wine.”

The Colombian Sephardic Passover meal always begins with eggs, fish and salad, and includes rice. “Fish are an important tradition because fish always have their eyes open in the water,” she said. “They symbolize freedom because they see everything.”

“One of my earliest visual memories of the Passover kitchen was soaking thin strips of white fish in the egg white and breading with matzo meal,” she said. “I loved seeing the transformation from a silky white fish to a golden-fried delicacy.” So instead of the Ashkenazi Gefilte fish, Abella Ballen eats the breaded white fish.

In addition to the fish, Sephardic Jews eat a myriad of salads in lieu of the Ashkenazi choice of matzo ball soup. These dishes contain a vegetable brought from the New World. “Our salads are small plates of vegetables,” she said. “We serve sweet red bell peppers cooked in the oven until they are roasted, then when blackened, we remove the skin, cut into strips and cook softly in olive oil.” Peppers arrived in Europe with the discovery of the Americas. Another unique fruit found at Passover is the eggplant. Eggplant came to Spain from Africa, and the Jewish community adopted it. Eggplant is now a staple on every Sephardic table.

Three more salads served at Abella Ballen’s Sephardic table include a carrot salad, a fennel with rose water salad and a pepper and olive oil salad. Rice is served as part of the main course. “Ashkenazi Seders do not include rice, but Sephardic Seders always do,” she said. “I like to serve a savory rice, saffron and almond dish.”

The dessert, which consists of fruits bursting with sweetness, remains the most wonderful part of the dinner for Abella Ballen. “I remember the fruits because our desserts are generally made with dates, figs, tangerines, apricots and quinces,” she said. “Often we take these fruits and add sugar, lemon zest, water and heat to crystallize them. We also eat almonds dipped in sugar syrup that are baked.”

Finally, “no Seder is complete without the traditional four cups of wine,” she said. These four cups serve as a reminder of redemption as told in Exodus.

But Abella Ballen’s favorite part of the Seder goes beyond the meal. It’s “when everyone discusses his or her personal meanings of enslavement and freedom.”

“Religious freedom is important to me,” she said. “Here, in the United States, you can simply say, ‘I am Jewish.’ In other places, you cannot do this. This is one of the many things that I am grateful for this Passover.”

For Sephardic Jews, lamb is the centerpiece of the Seder meal.

1/4 cup of olive oil, plus oil for rubbing

Preparation: Warm oven at 400 degrees. Place the meat on a rack inside the roasting pan, so the grease can drip away from the meat (have a meat thermometer).

Blend all the ingredients with 1/4 cup of olive oil until is like a paste.

Make various incisions all over the meat and poor the paste inside these incisions.

Rub the entire meat with olive oil and place the meat on the roasting rack, and roast it for 20 minutes.

Turn the temperature down to 325 degrees and roast for another 2 1/2 hours. Baste frequently with the wine-water mixture. Continue to baste with the liquid that accumulates at the bottom of the roasting pan using a bulb baster.

The meat is ready when the meat thermometer inserted in the meat registers 150 degrees for medium or 160 for well done.

Allow the meat to rest for 15 minutes before carving.

Deglaze the pan by pouring 3/4 cup of dry red wine into it and scrape the brown bits with a wooden spoon at medium heat. Degrease by using a bulb baster.

Pour the degreased sauce onto the carved meat. Garnish with sprigs of parsley.

“The first thing you eat at the meal is an egg symbolizing renewal,” Abella Ballen said. They are creamy and delicious. I generally cook them in a crock pot overnight with lots of red onion skins.”

Preparation: Place all ingredients into a pot or slow cooker. Cover well with lukewarm water.

Bring water to a boil then cover and reduce heat to low. In a pot, cook at least 5 hours while adding water as it evaporates, or cook in slow cooker overnight.

After 3 hours, gently tap shells with spoon to crack and continue cooking.

When finished, drain the eggs. Rinse the shells and refrigerate until served.

One of the intrinsic parts of the Seder meal is reading the Haggadah. The Haggadah is the text recited at the Seder on the first two nights of Passover, including a narrative of the Exodus. At Gloria Abella Ballen’s Seder meal, her family will be reading from a new Haggadah, one that she holds close to her her heart, as she helped create it.

The New World Haggadah, written by Ilan Stavans and illustrated by Abella Ballen, “celebrates the diversity of our multicultural and polyphonic lives as Jews today honoring the multiple voices and ancestries that we are,” Stavans said.

“For a long time,” he said, “I felt that in the Passover Seder, multiple cultures that shape the Jewish life were not represented.”

“Traditionally, the Haggadah includes the sentiments of the Yiddish and European Jews,” Stavans said. “However, the Passover story of slavery and freedom has acquired a new meaning with each enslavement of the Jewish people. This includes: Spain and the Inquisition, Germany and the horrors of the Holocaust, the Civil Rights and Chicano movements as well as the Dirty War in Latin America and immigration as a perennial force in the shaping of the United States.”

The book’s diversity appealed to Abella Ballen. “All the concepts in this new book resonate within me,” she said. “It is a multilingual book combining elements in poetry from different Jewish diasporas and historical times,” she said. “In fact, it includes the first Jewish poem written in the Americas by a Sephardic rabbi in the year 1646.”