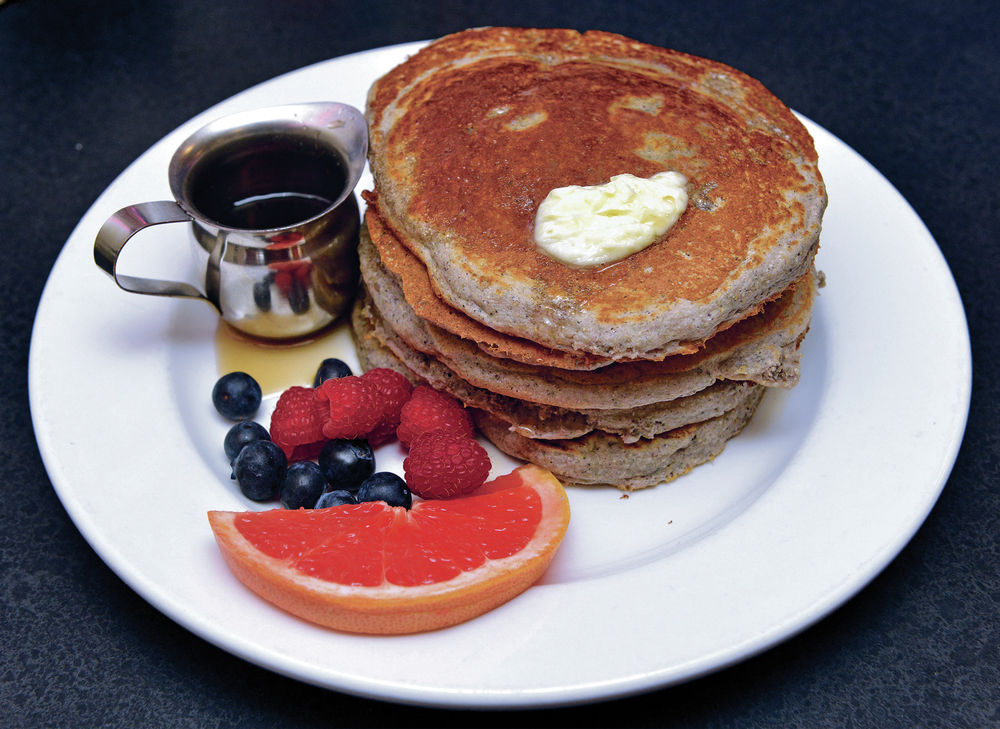 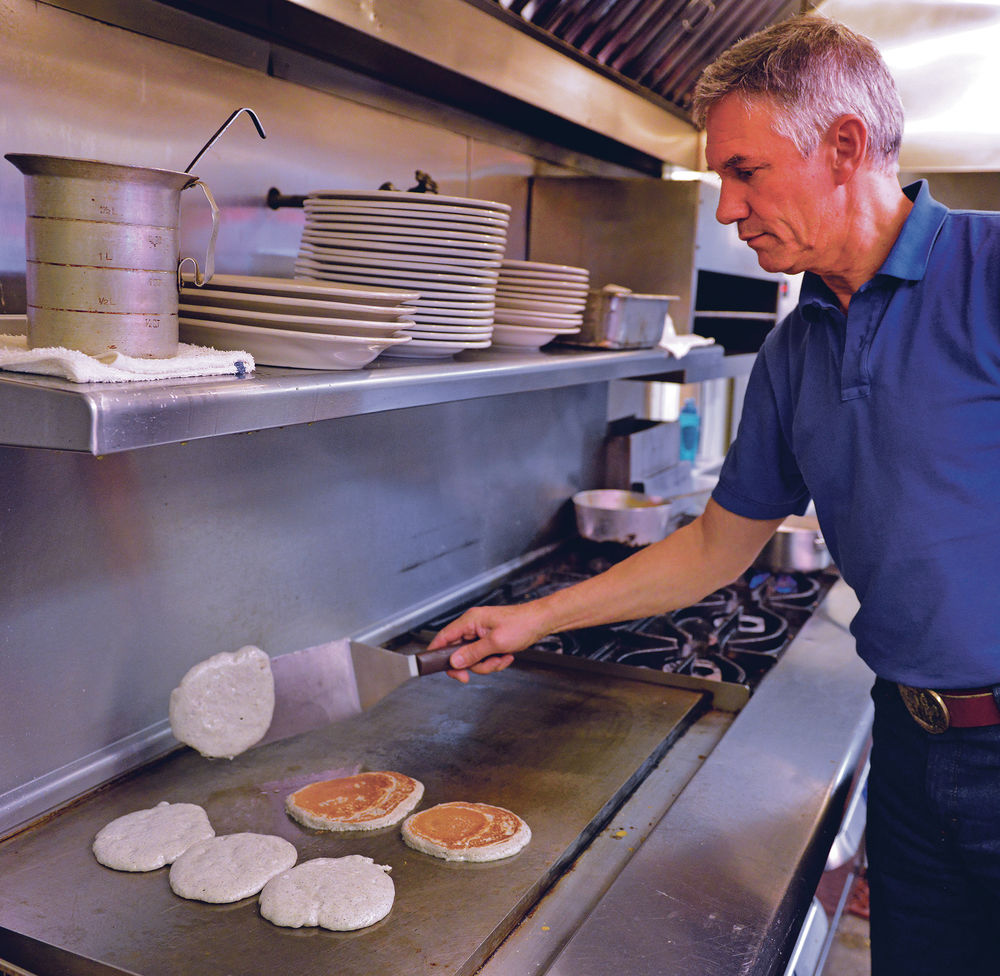 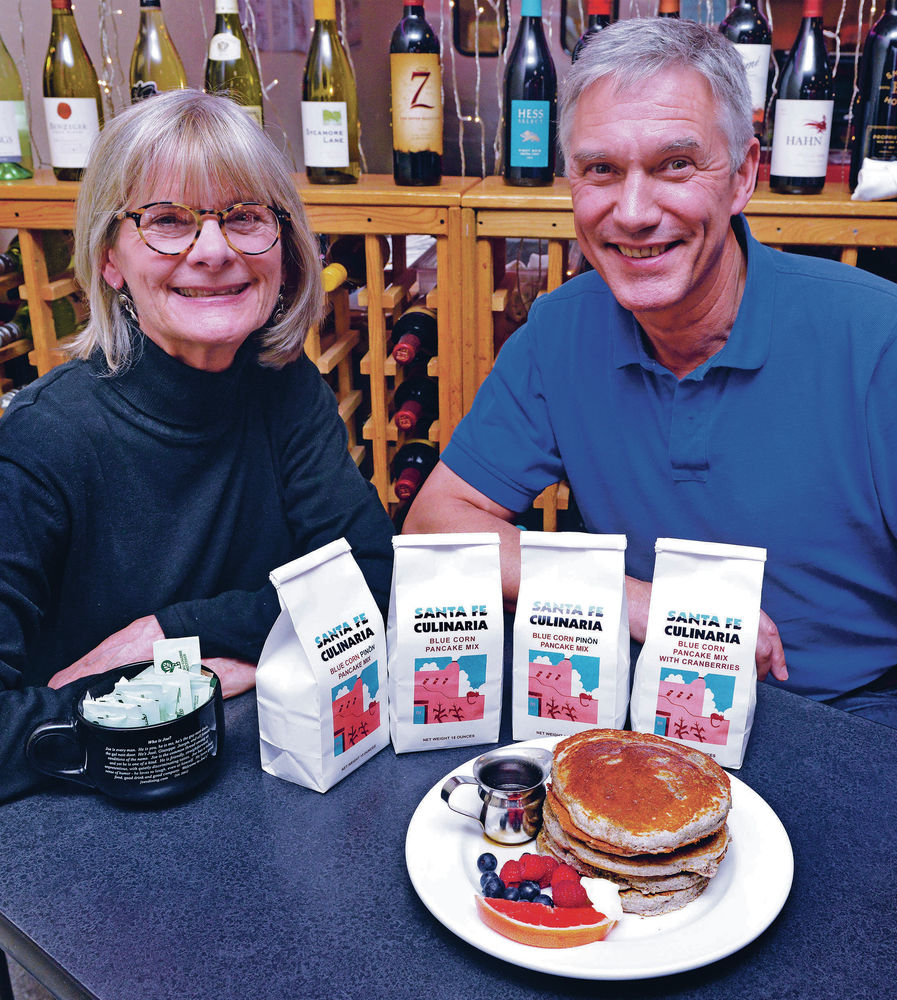 Holly Beaumont of Santa Fe Culinaria and Roland Richter, owner of Joe’s Dining, which uses the pancake mix. Other restaurants that use it as their go-to pancake mix include La Plazuela at La Fonda, the Burrito Co. and New York Deli (both locations). Photos by Clyde Mueller/The New Mexican

Holly Beaumont of Santa Fe Culinaria and Roland Richter, owner of Joe’s Dining, which uses the pancake mix. Other restaurants that use it as their go-to pancake mix include La Plazuela at La Fonda, the Burrito Co. and New York Deli (both locations). Photos by Clyde Mueller/The New Mexican

There is an art to doing one thing very well. Local food companies in particular have this concept down — Santa Fe is rife with cider companies, chocolate companies, companies that put chile in jars and chile on popcorn. But behind every successful one-off product are people who probably don’t make their living producing it. Cottage food industries are, by and large, a quasi-profitable labor of love.

Holly Beaumont and James Mokres of Santa Fe are not in the “food business.” Both have other careers: Mokres is a roofer and Beaumont does advocacy for Interfaith Worker Justice New Mexico. But the couple are also the sole proprietors of Santa Fe Culinaria, a local packaged food company that produces only one thing: blue corn pancake mix.

“It was a cottage industry we started as a fluke back in 1994,” Beaumont says. “It was kind of a self-dare to develop a pancake mix.”

It all began when they had a plate of blue corn pancakes at Tecolote (at the original location) and wanted to replicate them at home. They did not. What they did instead was come up with their own formula, a blend of unbleached flour, oat flour and soy flour (for texture), and what Beaumont describes as “the best blue corn meal on the market.” Blue corn pancakes, she says, can be heavy and gritty, but their magical corn meal (Hopi heirloom corn meal, according to the website) produces a light, fluffy texture. The source of that corn meal is their trade secret.

Having a cottage food industry in Santa Fe can be surprisingly tricky. Entrepreneurs who want to create a food product have to find a place to produce it. There are laws against converting garages into commercial kitchens unless the garage is detached from the house by at least 12 inches (most garages are not), and the Santa Fe Business Incubator doesn’t currently include a commercial kitchen, either. Santa Fe Culinaria packages its product (by hand) at the commercial kitchen at Santa Fe Olé, a local salsa company. Beaumont estimates they go through a mind-bending 12,000 pounds of pancake mix a year.

“I go in on weekends and we package and weigh and seal and get them ready for delivery,” Beaumont says. “It’s a lot of work — I’m doing it on my own.” The couple experimented with having a distributer, but the reality of commercial product distribution, shipping, etc., etc. shrunk their profit margin.

“We’ve watched and learned from other small businesses, and unless you’re pretty big and doing mass production, you’re really chipping away at your own profits,” Beaumont says. “Since we’re not supporting ourselves with the business, we get the luxury of allowing it to grow naturally and at its own pace.” For example, while they now have a conveyer belt sealer for their bags, when they first started, they were sealing bags one by one with an iron.

When you’re a cottage industry, getting local businesses to carry or use your product is a grass-roots, miles-on-your-car process of taking your wares door to door and bringing people samples. But only joyless killjoys (and Paleo diet enthusiasts) can say no to pancakes, so Santa Fe Culinaria has been reasonably successful in convincing people to spread its fluffy message far and wide. You can find Santa Fe Culinaria’s pancake mixes where all bespoke local pancake mixes are sold (i.e. where you go to find hostess gifts to take home or to send out-of-town relatives as gifts): Kaune’s Neighborhood Market, Gift N’ Gourmet on the Plaza, the Museum of New Mexico gift shop, etc. (for a full list, go to the Culinaria website, www.santafeculinaria.com, where they can be purchased as well). There are also a number of restaurants who use it as their go-to pancake mix: La Plazuela at La Fonda, the Burrito Co., New York Deli (both locations) and Joe’s Dining on Rodeo Road, in case you want someone else to fry up your flapjacks for you.

“Our pancake mix has traveled in suitcases all around the world,” Beaumont says. “It’s a great hostess gift if people want something from the Southwest, but they don’t necessarily want chile.” Blue corn and piñons are, after all, the other two obligatory touchstones of Southwesty foodness.

Santa Fe Culinaria’s pancake mixes come in three flavors: blue corn piñon (the most popular, and contains whole piñon nuts), plain blue corn and blue corn cranberry, which includes whole dried cranberries. Of course, you can do all the normal decadent pancake (and waffle) things with this mix — add chocolate chips, add bananas, etc. But Beaumont and Mokres, who eat their mix either as pancakes or waffles every Sunday morning, are purists.

“We sold them to a big website that promoted them dripping in honey with fresh peaches,” Beaumont says, “but frankly, our favorite way to eat them is with plenty of butter, maple syrup and a fried egg on the side.”

u For a list of local vendors or to buy Santa Fe Culinaria pancake mix online, visit www.santafeculinaria.com.

Santa Fe Culinaria: A side of pancakes