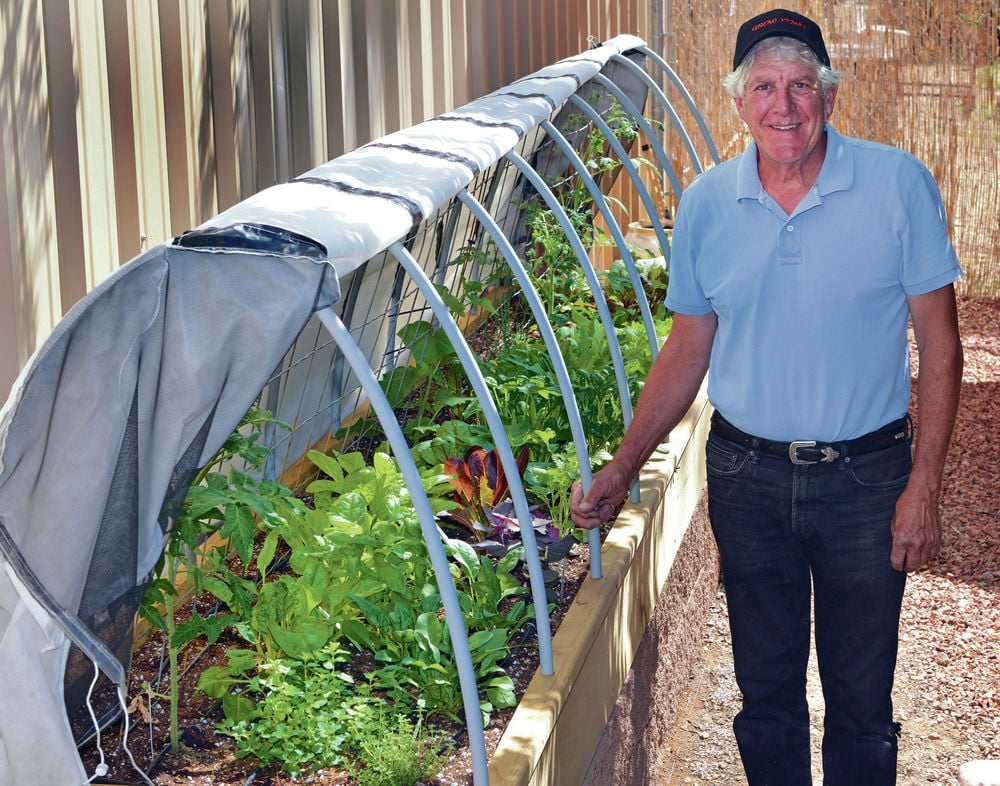 Kuhne, owner of Grow Y’Own, builds raised garden beds with covers for summer and winter conditions. ‘The covers are the key,’ he says. 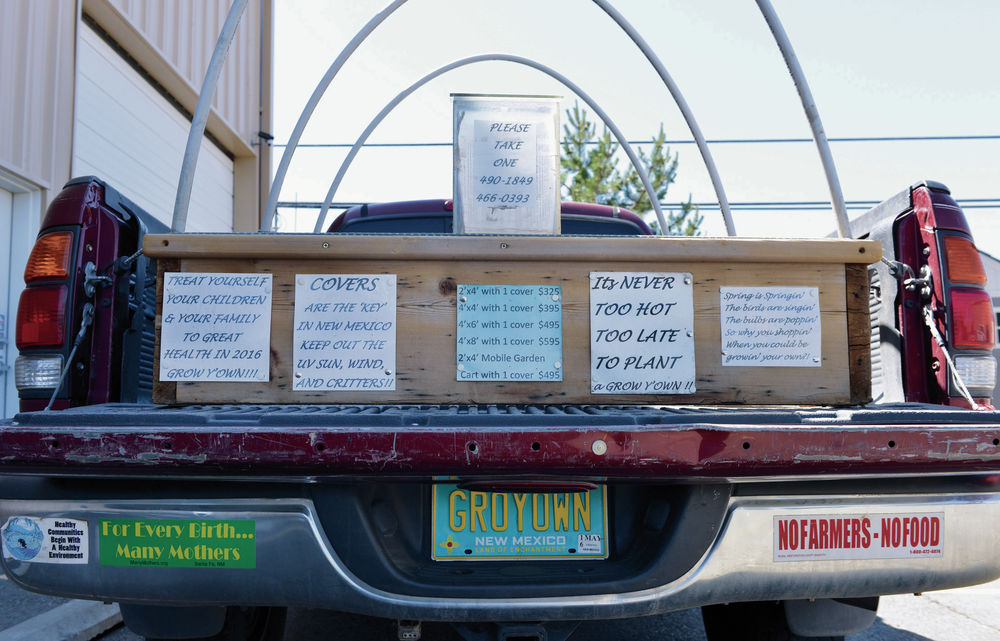 Ken Kuhne advertises Grow Y’Own, his business building garden beds, from his pickup. ‘[The truck] is my main form of advertising,’ Kuhne says. ‘I drive around, I have a model on the back of my truck, and I’ve got signage, and now after eight years, we’ve got almost a thousand beds in Santa Fe.’ Photos by Clyde Mueller/The New Mexican

Kuhne, owner of Grow Y’Own, builds raised garden beds with covers for summer and winter conditions. ‘The covers are the key,’ he says.

Ken Kuhne advertises Grow Y’Own, his business building garden beds, from his pickup. ‘[The truck] is my main form of advertising,’ Kuhne says. ‘I drive around, I have a model on the back of my truck, and I’ve got signage, and now after eight years, we’ve got almost a thousand beds in Santa Fe.’ Photos by Clyde Mueller/The New Mexican

Once upon a time, somebody ate an apple that didn’t belong to them and everybody suffered as a result. Next time, you should probably grow your own. That, anyway, is the ethos of Grow Y’Own, a Santa Fe company whose sole purpose is to build miniature Edens that anyone can have at home in the form of contained garden beds suited for growing vegetables, beans, fruits, etc. Anything the produce section can do, Grow Y’Own thinks you can do better.

The idea seems simple: a raised wooden planter box containing top-quality soil with a cover draped over wire hoops like a pioneer wagon. But it is this cover, unusual in the world of raised garden beds, that is the key to the success of the mini-gardens crafted by Grow Y’Own owner Ken Kuhne. New Mexico, Kuhne says, is a notoriously harsh climate for vegetables, and protecting them with a cover, meticulously engineered with ropes and grooves to stay in place through wind, weather and nosy animals, gives them a fighting chance to thrive.

“The covers are the key,” he says. “We have a summer cover and a winter cover. The summer cover is a triple weight polypropylene, eighty percent sunlight but keeps out the heavy-duty UV sun, which burns out lettuce, cilantro, spinach, keeps out the abrasive winds that play havoc with all the plants, and keeps out all the critters, including mice, packrats, etc. We’ve even had bears around the unit, and they just put their paws on the cover and then walk away.”

The winter cover is six-milled plastic and goes on top of the summer cover, effectively creating a double-paned window that traps heat and moisture, which allows people to grow food outside all year long.

“We’ve got people growing lettuce in Montana in January,” says Kuhne, who lived in Idaho for 16 years. There he had a “30-day growing season because it snowed every month of the year,” which is where he first started building plastic enclosures to try to extend the season.

The bed frames themselves are made of kiln-dried Western red cedar from British Columbia cut from renewable forests. Kuhne uses kiln-dried wood, he says, because it adapts better to a dry climate than green wood, resulting in structures that don’t split or bow — details born of the expertise of a skilled craftsman.

“I was a designer-builder for thirty-six years, and about fifteen of those were in Santa Fe,” recalls Kuhne. But the economic recession of 2007 dried up much of the business in custom homes, and when a house Kuhne was designing fell through suddenly that year, he found himself wondering what to do next. According to Kuhne, he couldn’t sleep one night and, in a fit of midnight pondering, realized what his new purpose in life was: He had to help people grow food — for them, for himself and for the world, really, by reducing the carbon emissions required to do something as basic as feeding the human race.

“If everybody were growing their own food,” Kuhne says, “it would severely cut the carbon footprint for shipping food thousands of miles, especially by airplane.”

Kuhne credits the idea for the Grow Y’Own boxes to friend and fellow Galisteo resident Deborah Madison, author of, appropriately enough, the seminal tome Vegetarian Cooking for Everyone. According to Kuhne, it was Madison who initially suggested he stop building houses and start building raised planting boxes, showing him photos of simple models.

“Deborah was definitely the instigator behind Grow Y’Own,” Kuhne says. “I wanted to help people grow food, and I wasn’t thinking about raised beds until she showed me the pictures.”

According to Kuhne, it was an idea whose time had come. He made a prototype and stuck it in the back of his truck with some signage and parked it at Whole Foods one day and then went to lunch.

“Five minutes later, somebody called and said, ‘This is amazing, I want six of these,’ ” Kuhne says. “By the time I got back to Whole Foods, there were ten people standing around my truck. I started selling beds right there.”

“[The truck] is my main form of advertising,” laughs Kuhne. “I drive around, I have a model on the back of my truck, and I’ve got signage, and now after eight years, we’ve got almost a thousand beds in Santa Fe, and we ship beds to 30 states and Canada. We help people, individuals, families, schools; we’ve given beds to all the Head Start locations; we work with young mothers; we’re at restaurants; we’re at community housing.” Grow Y’Own also has a large-scale installation at the Santa Fe Community College garden, where they built all the beds that grow the produce that gets used by the culinary arts department and several of the campus cafes.

“We’ve got people growing every kind of vegetable you can imagine,” Kuhne says. “Berries, potatoes … people can grow whatever they want. You can grow pretty much anything except for corn and artichokes, because they grow too high. We grow tomatoes, eggplants, squash, vines, everything. You’re trying to maximize every square foot in a four-by-eight [foot] bed, and we put about sixty plants in a four-by-eight bed.”

Grow Y’Own is basically full-service, and Kuhne’s personal expertise comes with every bed he sells. The small boxes start at $325 for a 2-by-4-foot unit, but Kuhne will build any size to fit any space. He takes a very hands-on, small-business approach to his work, going to the site of the installed box and troubleshooting any potential problems. If there are gophers, they’ll cover the bottom in wire mesh. If there are elms, they’ll cover the bottom in wood to block intrusive roots.

“We take out all of the things that can potentially limit someone’s growing capability,” he says. “We’ve got it down to a science. We can help anybody grow food … seventy percent of the people we sell to have never grown a thing to eat in their lives. Many of those tell me they have a black thumb. I call it ‘no-brainer gardening.’ ”

The boxes are amazingly low-maintenance. Kuhne sets them up on a drip so that you don’t have to water and very rarely have to weed (key for those of us who kill cacti with neglect). All you have to do, in theory, is keep up with picking your bespoke produce — something that, in a world of GMO wars and expensive farmers markets and E. coli scares, is increasingly appealing.

“People want to make sure that things are organic,” Kuhne says. “People know how their things are planted, watered, grown and picked, and there’s no surprises. Whereas when you go to the store, there can be many surprises.”

You don’t necessarily need acreage, or even a yard, to own one of Kuhne’s gardens. You can put the units inside if you have the right conditions, or stick them in whatever available sunny outdoor crevice you might have.

“I have some clients that have the boxes inside their homes, in south-facing windows, or something where it’s getting good light,” he says. “We sent one [2-by-4-foot] bed to New York City, and this woman put it on her fire escape on the seventh floor.”

Grow Y’Own beds can even be placed up on raised platforms so people with back problems or in wheelchairs, who may have issues bending over to garden on the ground, can get up-close and personal with their vegetables.

And if you think June is too late to start your own little lettuce factory, Kuhne would like to set you straight on that point as well.