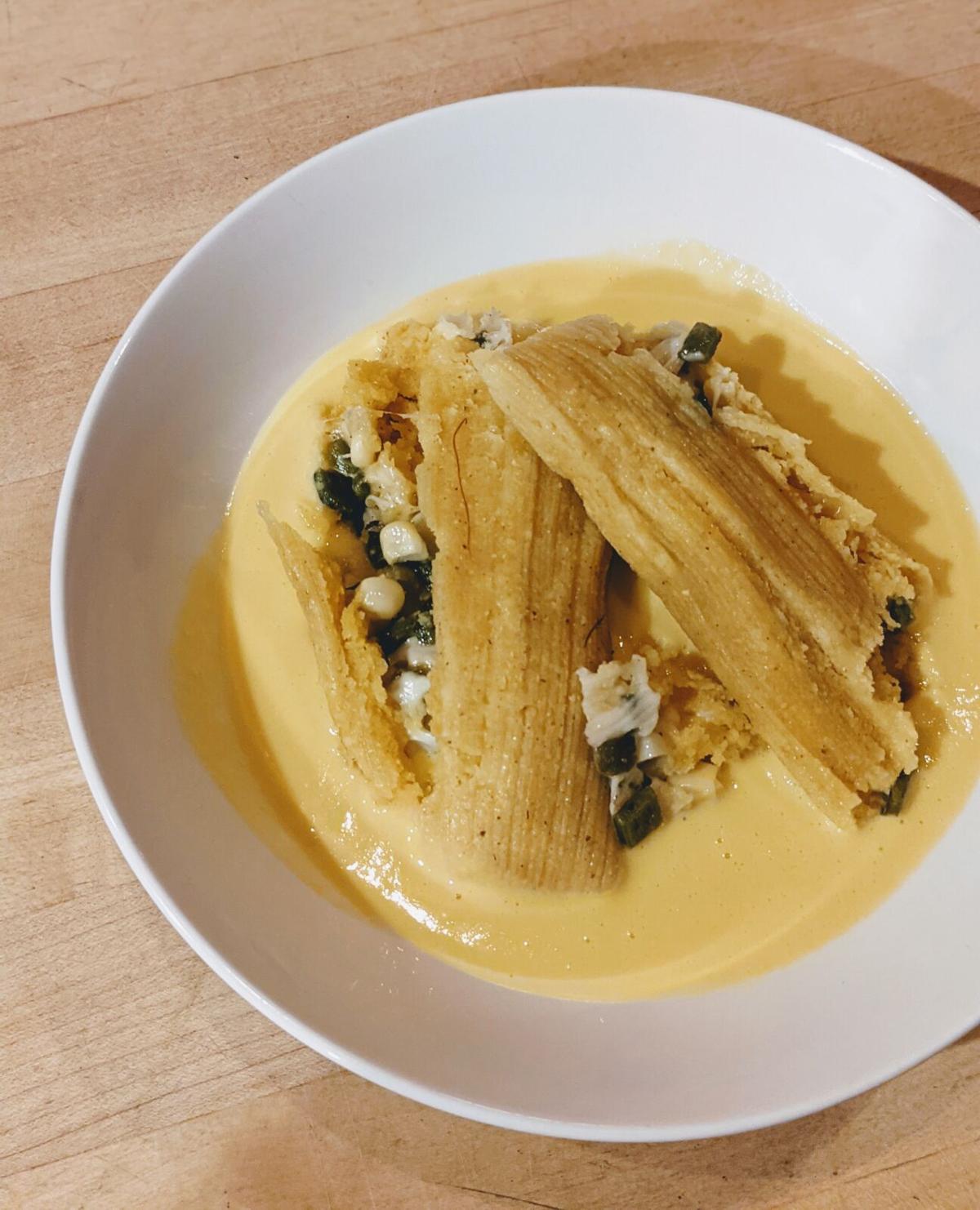 With New Year’s around the corner, it’s the perfect time to share a celebratory tamale recipe. As an Italian transplant from the Midwest, I am what you would call an enthusiastic student when it comes to making tamales, so I have been a bit bashful about sharing a recipe until now. Thankfully, I’ve had the good fortune of being able to cook alongside generous chefs such as Lois Ellen Frank and Walter Whitewater from Red Mesa Cuisine, who have taught me about masa texture, filling possibilities (practically endless!), tips about tying and soaking the husks, cooking and serving.

Most of all, I would suggest, even if you have never made tamales before, to just go for it! Being that many of you will have your own favorite tamale sauces and fillings, I decided to share a tamale recipe that’s not as classic but includes many of my favorite things (duck fat, fire-roasted poblanos and caramelized onion). While here I use a corn sauce, if I had some red chile in the fridge, you can be sure I would serve that on the side, too.

Tamales, like many recipes steeped in history, are difficult to capture fully within a written recipe, although I do my best to share as much as possible here. What I found most helpful in my own learning journey is to make tamales with people who have been making them for a long time. If you are unable to do this, there are many videos online that are fun to watch, too. In this case, learning is most effective (and fun) in community with others — making and enjoying them together and sharing them.

2 cups of water or vegetable broth, additional if needed

For the vegetable filling:

Salt and pepper, to taste

For the corn sauce:

Preparation: In a large bowl, cover corn husks with hot water and place a plate on top to keep the husks submerged. Let them soak while you are making the other components, but at least for 30 minutes.

Make the masa: In the bowl of a stand mixer with the paddle attachment, whip together the duck fat, salt and baking powder to incorporate as much air as possible, around 4 minutes at medium-high speed, scraping down the sides of the bowl a couple times along the way. Change the speed to low and slowly add the masa harina. You’ll notice the mixture resembles clumps of coarse sand. Now add the water slowly, noticing how the dough comes together. You may need to add more water, or even a little more masa harina. Once the water has been added, increase the speed to medium-high until the final dough texture is reached. The dough should be soft and fluffy, come away from the sides of the bowl but not be sticky. Transfer the dough to an airtight container, lay a damp paper towel directly over the dough and let the dough rest for 30 minutes.

To make the vegetable filling, carefully roast the peppers directly over the flame of a grill, gas stove or broiler until they are charred all over. Transfer the peppers to a bowl or pot with a splash of water and cover tightly for 15 minutes or so. Peel them using the back of a knife or your fingers, remove seeds and dice. Place the diced peppers in a medium bowl. In a wide, heavy-bottomed pot, melt the butter over medium heat. Add the onion and cook, stirring occasionally until they are caramelized, around 20 minutes. Transfer the caramelized onions to the bowl with the poblanos. Add the frozen corn to the bowl, which will cool everything down. Add the cheese and gently toss everything together, seasoning with salt and pepper.

Build the tamales: Remove the corn husks from the water. Tear a few of the soaked corn husks into ¼-inch strips for tying and keep to the side. You will want a total of 24 strips, one for each tamale. Build as many as your workspace will allow at a time. Lay open the corn husks with the widest part closest to you. Divide the dough in half, then divide each piece in half again. You will have four pieces of dough, and each piece should make 6 tamales, so either break each piece into 6 smaller pieces or estimate as you go. Press a ball of masa into the center of the widest part of the corn husk into a circle, leaving a half-inch on each side. After your corn husks all have flattened masa circles, place a spoon of filling in the center of each one. Holding both sides of the corn husk, bring the masa up and over the filling, snugly rolling the corn husk around each tamale and folding under the long part of the husk that is unfilled. Slide one of the thin corn husk strips under the folded tamales and tie into a knot. Repeat this process until all tamales are filled and tied.

At this point, you can freeze the tamales for up to a few months or you can refrigerate them for up to four days. When you are ready to cook them, you can steam them in a steam basket placed in a pot of boiling water on the stove for 30 minutes if fresh or 45-60 minutes if frozen. Alternatively, you can steam them in a 350-degree oven using a stainless steel colander that can sit on the bottom of a Dutch oven. Pour boiling water in the bottom, making sure the water doesn’t touch the surface of the colander, cover with a tightly fitting lid and cook the tamales vertically, the open end at the top for up to an hour (depending on if they are fresh or frozen) until they are fully cooked. I haven’t tried this, but I have heard you can cook tamales in the microwave by sprinkling a few drops of water on them, covering them in plastic and cooking them for two minutes. However you cook your tamales, you’ll know they are done when the corn husk easily peels away from the masa.

While your tamales are cooking, make the corn sauce (this can also be made ahead and refrigerated or frozen). In a medium saucepan over medium heat, add the butter. Once it melts, add the onion and carrot for around 10 minutes. Add the garlic, cook another minute, then add the corn, cream and water. Bring this mixture to a simmer and cook for around 20 minutes, or until the carrots are tender. Season with salt to taste and carefully blend this mixture until smooth. Using a rubber spatula, pass the corn sauce through a fine mesh strainer to remove the leftover skin and pulp. Warm the sauce in a saucepan before serving.

To serve, pile the hot tamales on a platter and let people serve themselves with the warm corn sauce on the side for ladling over the top.

Tamales are one of my favorite, go-to comfort foods. Growing up in northern NM has me most fond of lard, pork and red chile tamales, but I'm always willing to try different kinds of tamales! I think your recipe sounds delicious (duck fat, yum!) and I'll give it a try. Thank you.

I agree completely with Ed Taylor.

I love the use of duck fat as an alternative to lard. I also like the masa prep details. Getting air in -- that's the secret.

Tamales are NM soul food. I love the tradition and am inspired by new interpretations. If I had a last meal choice b4 the gallows, it would certainly be tamales!

i am sure this is a great new age recipe I however will make Tamales the way we have for 50 years and the way my mother before me and her mother before her. It will involve cumin, red chili, and pork.

Yuk! Without pork, they are not tamales, reminds me of Rachel Ray's "Pozole", awful.

How difficult would it be for you two to simply say, "Thanks for sharing." Or better yet....say nothing at all.

"Silence is agreement". This cook needs to know what people think. Most cooks do care. Maybe you should watch Rachel's recipe.......https://www.youtube.com/watch?v=Zl73k_pCAjw

Mike, many years ago a friend gave me post-it-notes that said "Everyone is entitled to my opinion". I'd bet you could probably find them for yourself.

You can disagree without using the words "yuk" and "awful."