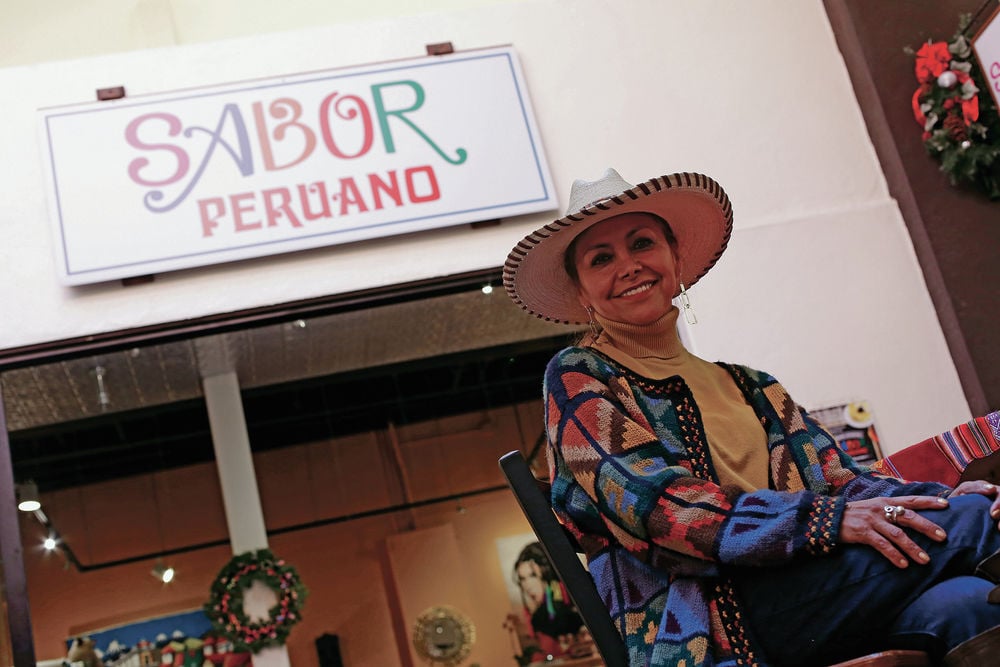 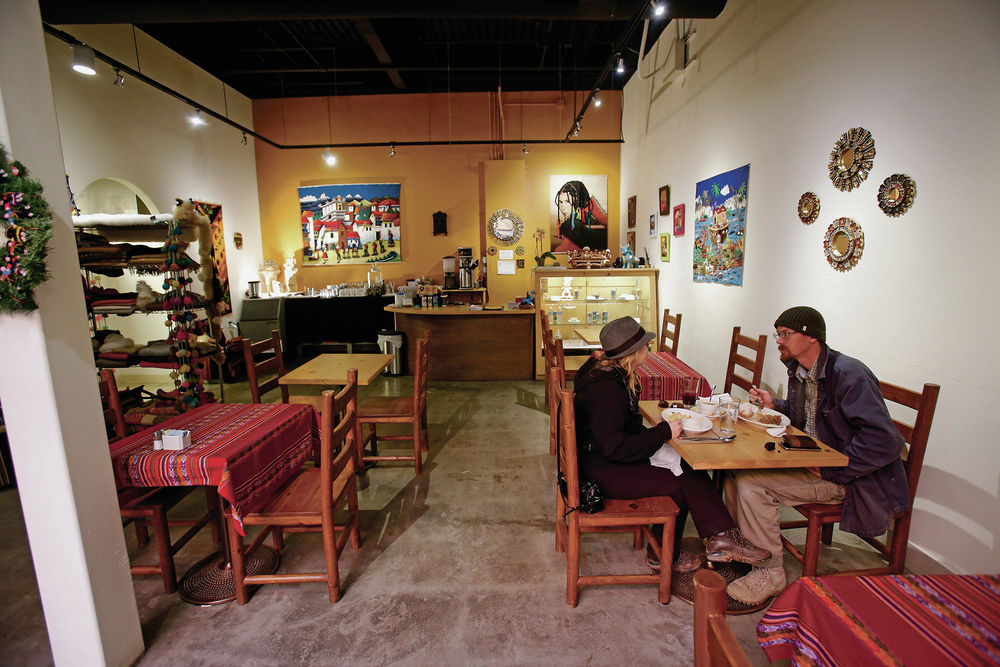 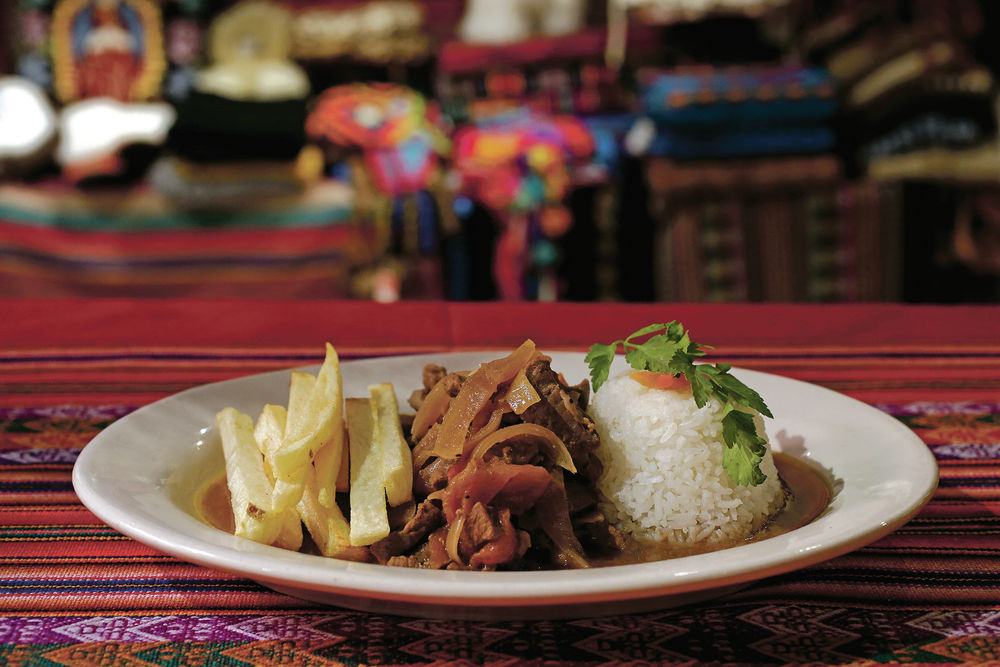 Peru is to potatoes what Louisiana is to shrimp. There’s mashed potatoes, stuffed potatoes, roasted potatoes, boiled potatoes. And your newest portal to all things Peruvian, including the cuisine, is a new, unassuming, magical little spot in the DeVargas Center mall called Sabor Peruano.

Sabor Peruano is owned by sisters Adriana Brawley and Susana Hamilton, both Peruvians who moved to Santa Fe in the last year. Brawley owned a retail space in St. Louis for years, but this is the sisters’ first crack at serving food.

“I came here the first time [to visit Susana] and I liked it, and we decided to open a restaurant,” Brawley says. “We had the idea for so long in Missouri, but we never tried.”

The space, which up until recently housed a now-closed Ethiopian restaurant, is half retail, specializing in handcrafted Peruvian goods, shawls, ponchos, bags and shoes, the edges of which spill out the sides of the space with colorful abundance, giving the impression, to the passerby, that Sabor Peruano is a shop. But nay, the rest of the space is given over to a few tables and a service counter, an understated platform for Santa Fe’s only genuine Peruvian cuisine.

Much of which involves, of course, said potatoes. Peru is the ancestral home of all the world’s potatoes, which grow native in the Andes mountain range, and while the American palate has grown accustomed to an ever-increasing variety (blue potatoes, fingerlings, Idahos, etc.) Peru boasts more than 4,000 varietals. Brawley and Hamilton have to import many of Sabor Peruano’s varieties of potatoes, including the Peruvian papas amarillos, or yellow potatoes, that are the staple of many of their dishes (not to be confused with Yukon gold or fingerlings or any of the yellow potatoes you find stateside, all of which, however, spring from the family tree of those Peruvian yellow potatoes). Different Peruvian potatoes have different qualities — some are better for mashing, some for boiling, some are waxy and stand up to long cooking, others fall apart unless treated with delicacy.

Sabor Peruano’s menu is an edible primer to Peruvian cuisine, serving up the hits, the classics and the staples that those who have traveled to Peru might recognize or crave. Andean cusine is a cultural mishmash of indigenous foods like potatoes, peppers, ancient grains and corn mixed with Spanish imports like wheat and dairy. Papa la huancaina, for example, is a Peruvian restaurant favorite, a somewhat odd-looking but satisfying plate consisting of boiled Peruvian yellow potatoes covered with a creamy yellow cheese sauce, served on lettuce. The sauce is spiked with the heat of the aji amarillo, Peru’s de facto national pepper, a piquant, spicy (but not punitive) pale yellow pepper that runs through the flavor profile of Peruvian cuisine.

You can then move on to causa rellena, a pretty, stacked tower of potato slices, avocado and various meat fillings, or papa rellena, a potato stuffed with filling (meat or vegetable) and then breaded and fried. Quinoa, everybody’s favorite alternative ancient grain, also has its origins in the Andes, and at Sabor Peruano, you can have it in a salad with avocado and eggs or in the Peruvian chicken quinoa soup. Sabor Peruano also offers a second chicken soup, aguadito de pollo, a surprisingly rich and smooth chicken soup given a zing of freshness and tang (and its bright green color) by copious amounts of blended cilantro.

If you want something more in the way of a meaty main course, there are currently two choices. Aji de gallina is chicken in a spicy yellow sauce similar to the sauce on the papa la huancaina. Then there’s lomo saltado, a dish that epitomizes chifa cuisine, the Chinese-Peruvian food amalgamation of Spanish food, traditional Andean ingredients and the cooking of Chinese immigrants who came to Peru in the late 19th century, largely as indentured servants and laborers. Lomo saltado is a Peruvian beef stir-fry served with rice and french fries. Every Saturday, Sabor Peruano features a different off-menu special as well.

Desserts include alfajores (Peruvian shortbread cookies), arroz con leche (rice pudding) and the distinctively Peruvian mazamorra morada, or Peruvian purple corn pudding, a gooey dessert that looks like cranberry sauce, made by boiling Peruvian purple corn with apple pie spices like cinnamon and cloves — try a similar thing in cold drink form with an order of chica morada. Or have the pastel de choclo, a gooey, corn pudding-like sweet corn cake with raisins, nuts and coconut.

Sabor Peruano is open from 10 a.m. to 6 p.m. Monday through Saturday and closed Sundays, though the restaurant will try to stay open later if business demands it. Soon they also hope to offer alcohol, including a selection of Peruvian beers.