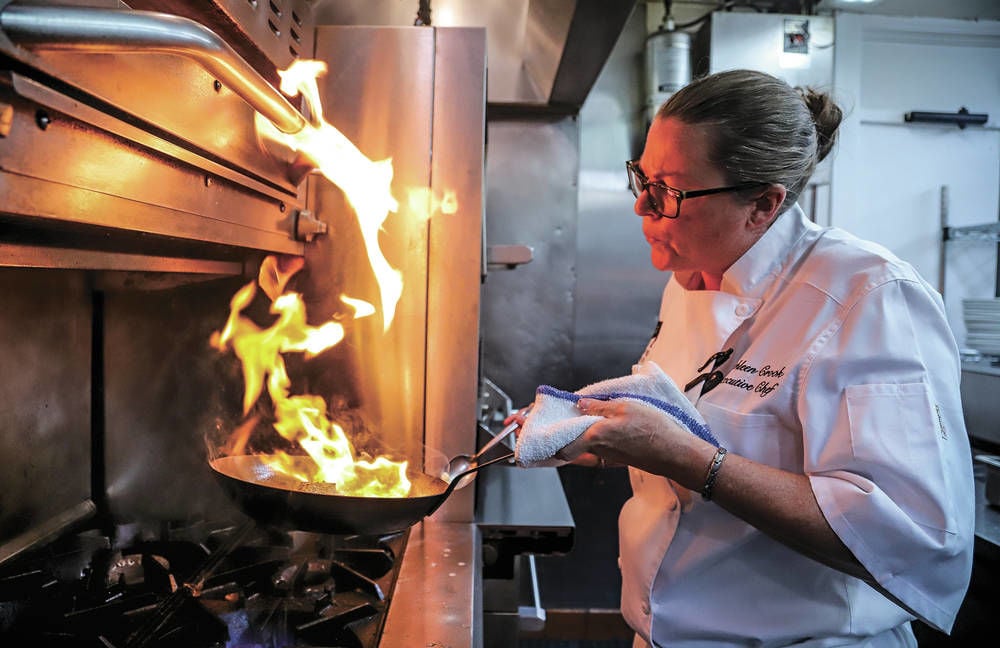 Kathleen Crook, co-owner and executive chef of Market Steer Steakhouse, is an Artesia native with a love for beef from her childhood as part of a farming and ranching family. ‘I grew up living farm to table before farm to table was cool, before it was a buzzword,’ she said. Photos by Gabriela Campos/The New Mexican 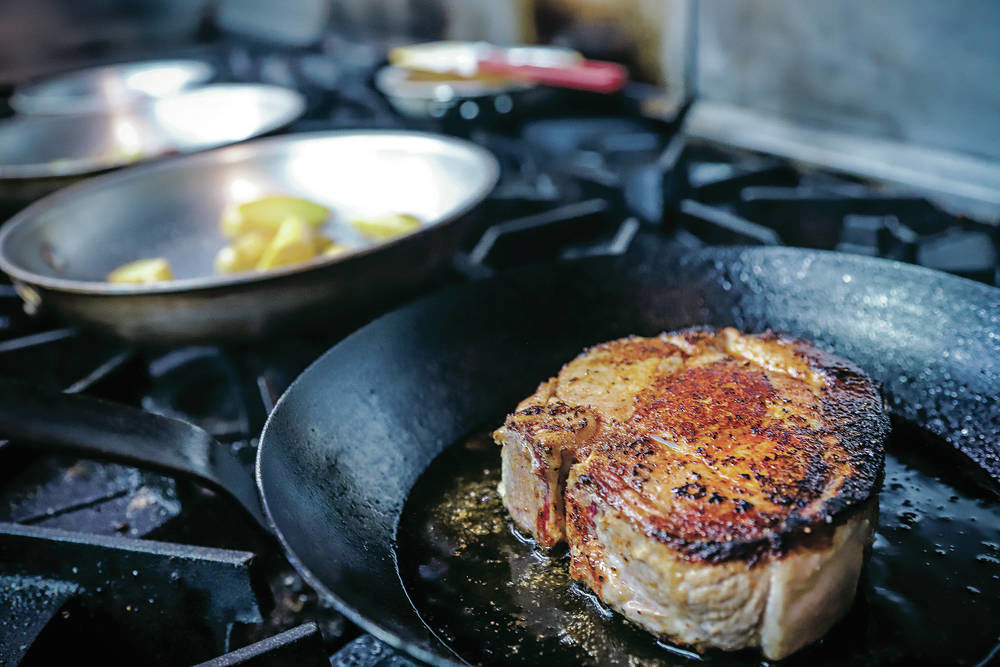 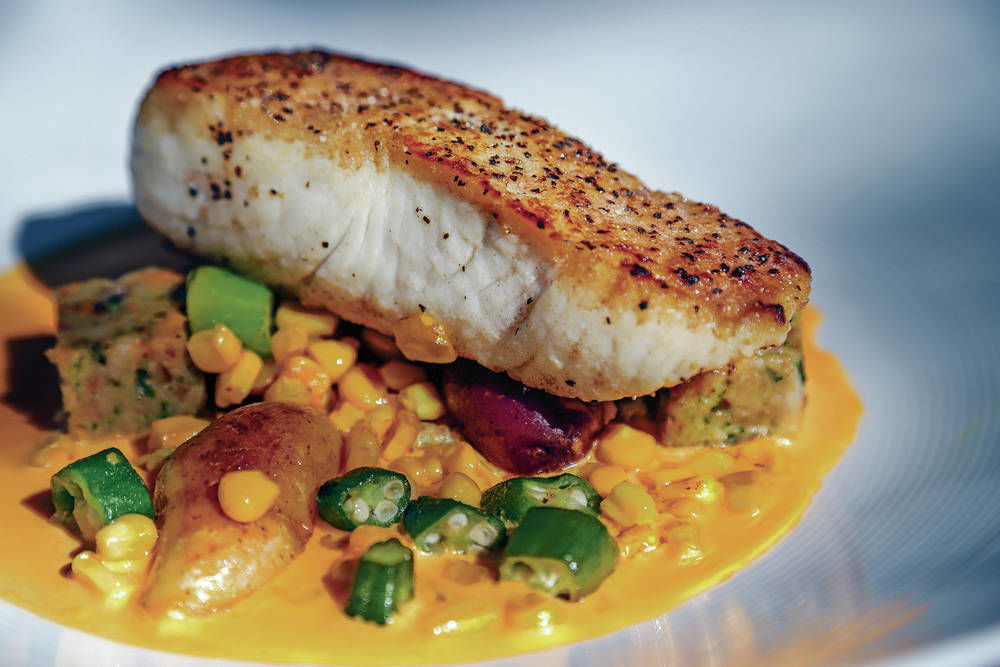 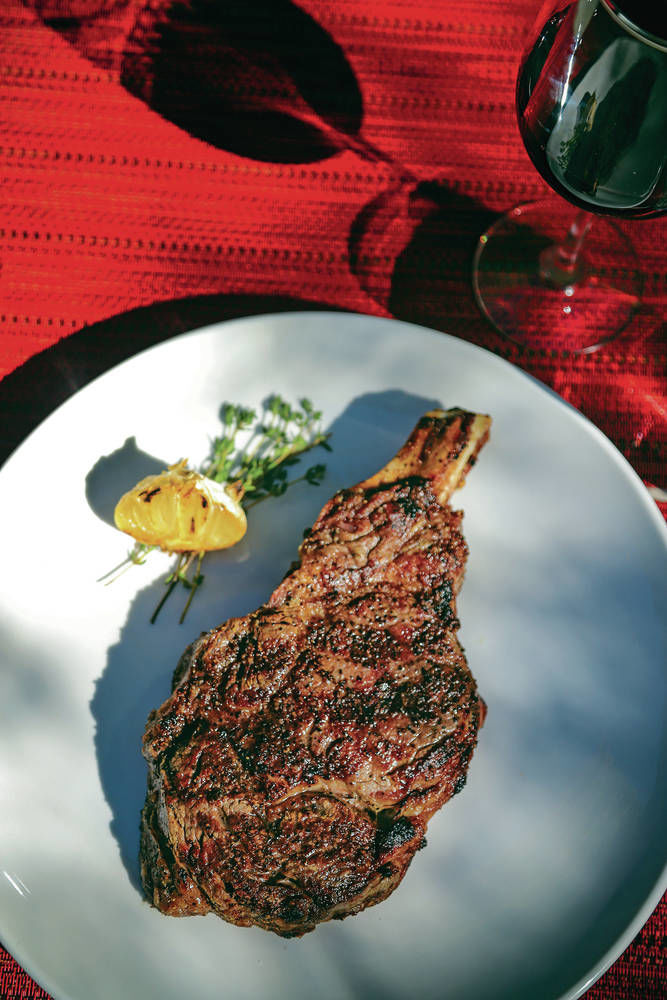 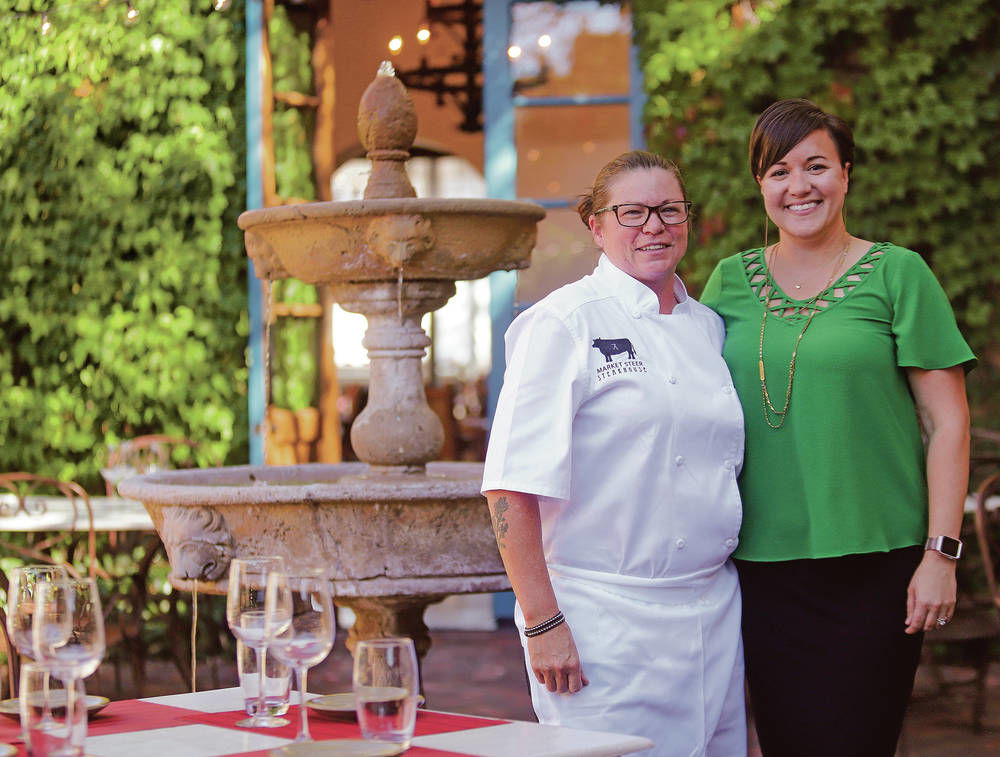 Kathleen Crook, co-owner and executive chef of Market Steer Steakhouse, is an Artesia native with a love for beef from her childhood as part of a farming and ranching family. ‘I grew up living farm to table before farm to table was cool, before it was a buzzword,’ she said. Photos by Gabriela Campos/The New Mexican

Ask a passer-by their pick for “real” New Mexico cuisine, and you’ll likely get one of two responses: a tongue-in-cheek invitation to their aunt or grandma’s kitchen, or a local restaurant renowned for blazing chile and pillowy sopapillas.

In some ways, though, it’s hard to get more real than at Market Steer Steakhouse, the new dining destination inside Hotel St. Francis.

Owners Kristina Goode, who also is general manager, and Kathleen Crook, the executive chef, have created a restaurant that pays homage to the state’s rich agricultural heritage — and to their own families’ traditions.

“I grew up living farm to table before farm to table was cool, before it was a buzzword,” said Crook, 42. “I try to hold true to those roots.”

Crook, who grew up in Artesia as part of a farming and ranching family, recalls the garden bursting with produce, watching her grandmother skillet-frying okra or assembling pico de gallo with a freshly picked tomato and jalapeño to accompany their meal.

Over in Dallas, Goode, 37, grew up with freshly baked bread on the table, trips to the co-op for dairy and her mother’s thriving garden.

“That was always my biggest complaint as a kid: ‘Why do we always have to make everything?’ ” Goode said with a laugh. “So food’s always been a big part of my life as well.”

But Crook’s New Mexican upbringing takes center stage at Market Steer Steakhouse — down to the name. She learned the term, which refers to a steer ready to be processed, while raising livestock for 4-H and Future Farmers of America.

Cattle — and livestock in general — are a major aspect of New Mexico’s agricultural heritage; at least one historian dates the industry’s foundation to the close of the 16th century. There are 483,000 beef cattle spread across New Mexico’s nearly 1,800 operating farms, according to the U.S. Department of Agriculture.

“Before she went to culinary school, she worked on a ranch for years, so she has this deep-rooted love for beef, and she comes from a long line of farmers and ranchers, and so that meal of meat and potatoes has been a staple in her life forever,” Goode said of Crook, to whom she’s been married for six years. “But there is a big difference between just getting meat and potatoes and getting a prime cut of beef and really well-executed potatoes. So we wanted to elevate that very traditional American comfort celebratory meal.”

Market Steer takes over the space most recently home to New Mexican cuisine-inspired Tabla de Los Santos, which closed earlier this year after changing operators more than once, Goode said. In a previous life, the hotel was the original home to the iconic Steaksmith, in the ’70s and ’80s. It moved to El Gancho Fitness, Swim and Racquet Club before closing in 2015.

Market Steer Steakhouse’s menu has hints of Tabla’s New Mexican influence and nods to traditional steakhouses like the beloved Steaksmith, but the dishes — and the approach — are entirely its own.

Top that steak with a choice of butter, demi-glace, bearnaise and other preparations ($4) if you so choose, then head to the sides menu for some of those aforementioned “well-executed potatoes,” including truffle fries and olive oil-whipped potatoes. You’ll also find plenty of other sides ($9-$25), both traditional and less so, from sautéed asparagus or spinach to Lobster Mac and Green Chile Risotto.

“There are nods to my heritage — New Mexico is my heritage,” Crook said. “There’s always a little spice in everything I make.”

Goode and Crook have worked to liven up the image of the traditional steakhouse by bringing a little fun into the mix. One example: bone marrow luges. After you’ve sucked out the rich marrow from your appetizer ($14), a server will help you wash down the indulgent dregs with a shot of bourbon poured luge-style down the hollow interior, “so you get beef and bourbon and fat and all that deliciousness,” Goode explained.

If you prefer your drinks by the glass, never fear: Secreto Lounge next door serves beer, wine and liquor, including its signature cocktails, to Market Steer diners. In turn, Market Steer customized a special menu for Secreto that includes refined versions of bar-friendly fare like a green chile cheeseburger ($15), Sriracha honey-glazed chicken sandwich ($14) and Steak Frites ($17).

Perhaps such versatility could be expected of someone who traveled the rodeo circuit for three years, even being named World Champion Breakaway Roper, before turning her focus to studies at Scottsdale Culinary Institute/Le Cordon Bleu. Crook began cooking in Dallas and met Goode, who has more than 20 years in the restaurant business, from hostess and server jobs to general manager for high-end Steakhouse 316 in Aspen, Colo.

She and Crook were commissioned to open that steakhouse and moved to Colorado in 2010. Seven years later, they started KGC Hospitality and moved back to Crook’s hometown of Artesia, where her parents still run beef cattle on their ranches. They kept busy with consulting and a food truck called Farmer’s Feast serving modern American cuisine while they explored Colorado, Santa Fe and Albuquerque for the perfect spot for their steakhouse concept.

Along the way, Crook has kept her heritage close. On one arm is a tattoo of cotton and alfalfa — the crops she remembers her grandfathers picking — others of a chef’s toque and tools, and three small, line-drawn animals representing the cuts for poultry, pork and beef.

The most prominent symbol of that heritage, though, is Market Steer’s logo: the number 7 merged with an open A. It’s Crook’s father’s brand, used to identify his livestock.

“They’re just such wonderful people,” Goode said of Crook’s farming and ranching family members. “It’s been really fun for them to come and visit and taste the steak and be like, ‘Damn, that’s really good.’ And we’re like, ‘Yes! Nod of approval.’ ”