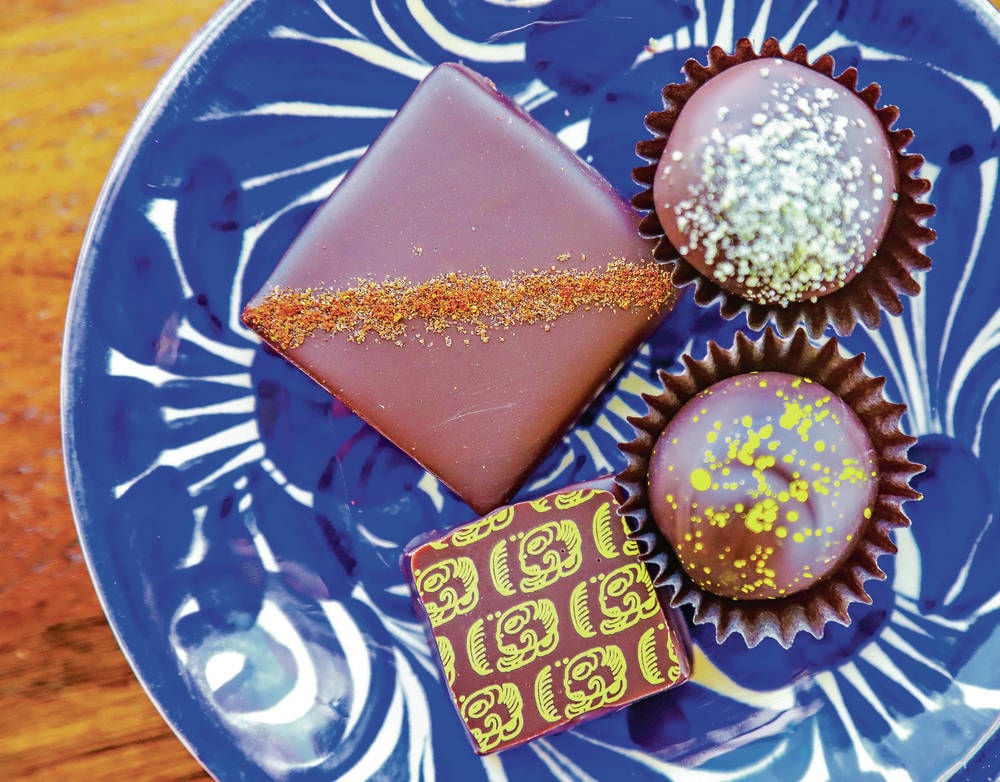 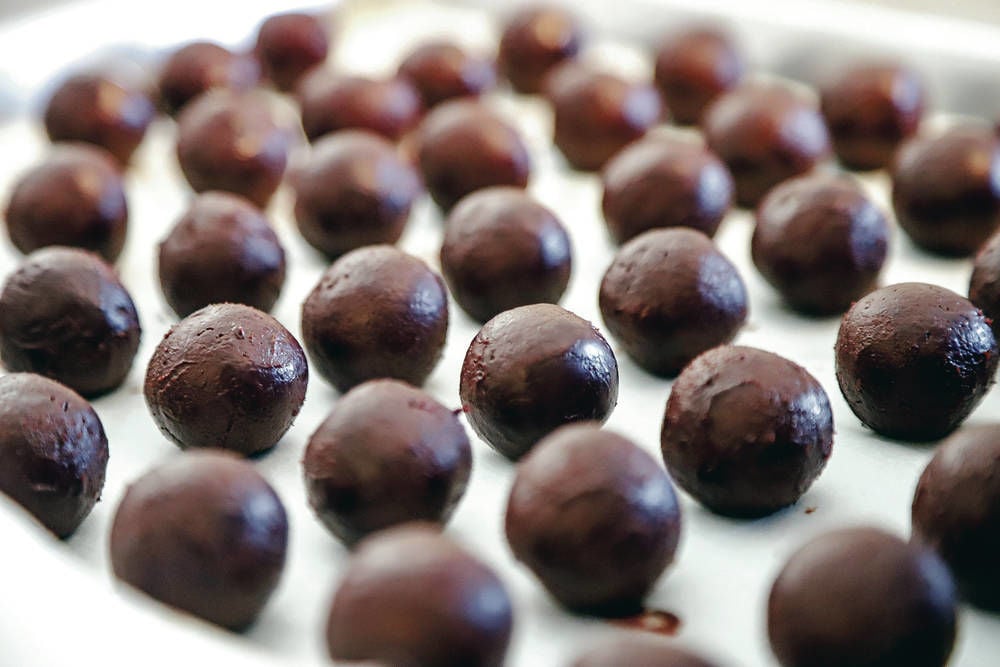 ABOVE: A tray of freshly rolled pomegranate truffles await another layer of chocolate Tuesday at Kakawa Chocolate House’s new location at 1300 Rufina Circle, Suite A4. BELOW: An array of Kakawa’s artisanal chocolates. Photos by Gabriela Campos/The New Mexican 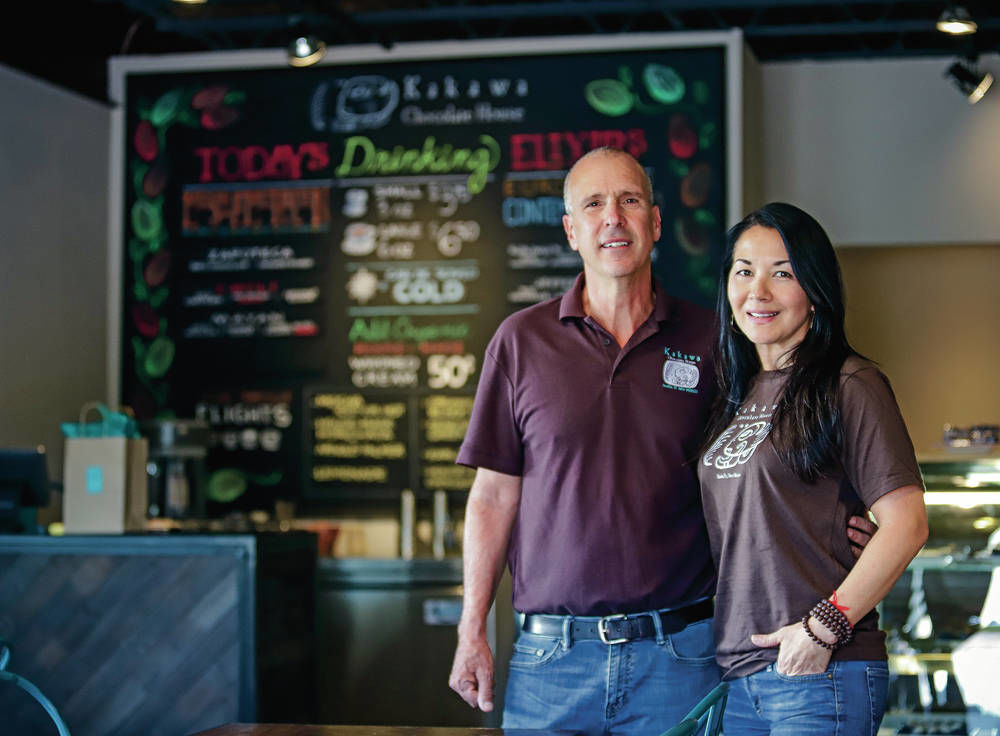 Tony and Bonnie Bennett, owners of Kakawa Chocolate House, have opened a second Santa Fe location and will open a location in Salem, Mass., later this year. 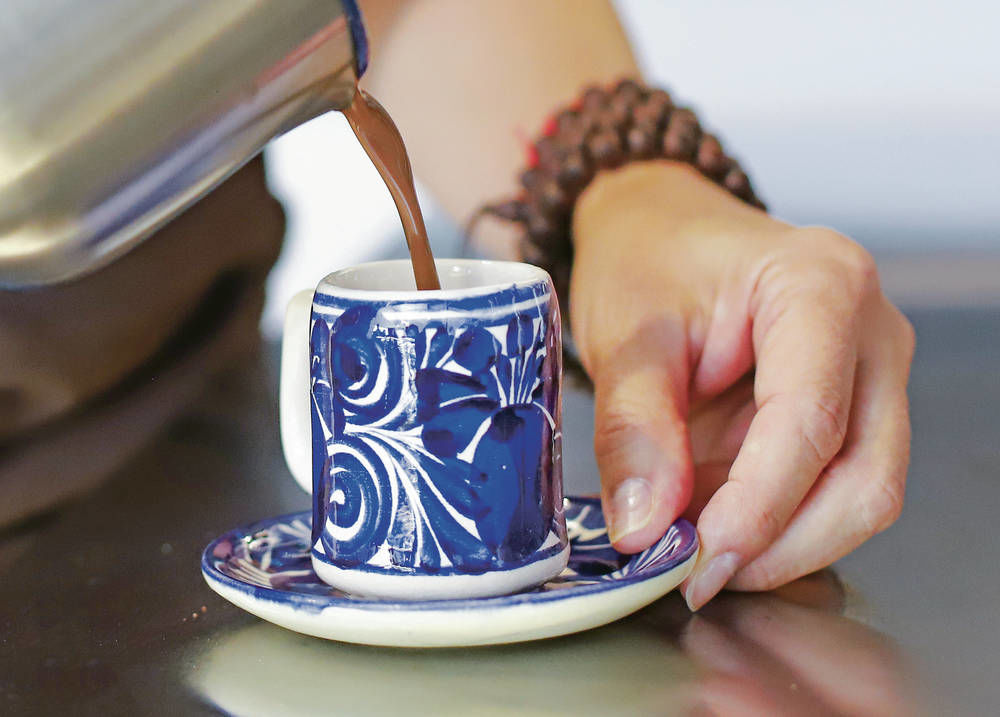 Bonnie Bennett pours one of Kakawa Chocolate House’s specialty chocolate elixirs called the Zapoteca, made with 100% unsweetened chocalte at their new location at 1300 Rufina Circle A4 on September 11, 2018. Gabriela Campos/The New Mexican

ABOVE: A tray of freshly rolled pomegranate truffles await another layer of chocolate Tuesday at Kakawa Chocolate House’s new location at 1300 Rufina Circle, Suite A4. BELOW: An array of Kakawa’s artisanal chocolates. Photos by Gabriela Campos/The New Mexican

Tony and Bonnie Bennett, owners of Kakawa Chocolate House, have opened a second Santa Fe location and will open a location in Salem, Mass., later this year.

Bonnie Bennett pours one of Kakawa Chocolate House’s specialty chocolate elixirs called the Zapoteca, made with 100% unsweetened chocalte at their new location at 1300 Rufina Circle A4 on September 11, 2018. Gabriela Campos/The New Mexican

The wall of chocolate aroma that hits you when you enter Kakawa Chocolate House’s recently opened second location near Meow Wolf is so solid that it feels more like a physical threshold than an olfactory one — a portal, perhaps, to a virgin sensory experience (not dissimilar to the one down the street).

Unlike the Santa Fe chocolate institution’s flagship location in a tiny adobe home on Paseo de Peralta, the new digs are airy, bright, industrial and modern. In an open loft space upstairs, three tempering machines whir, keeping 15- and 30-pound batches of silky liquid decadence from losing their sheen. On the wall above, an air-conditioning unit sends the scent throughout the shop and keeps the humidity-controlled space between 66 and 68 degrees. A smidge higher or lower, and the chocolate will adopt a waxy, swirling texture.

Someone once told Bonnie Bennett, who owns Kakawa with her husband, Tony Bennett (not the singer), that chocolate is a fickle mistress. After seven years in the business, she knows that to be true.

Still, that hasn’t kept the Bennetts from pushing onward. Now, it’s time to embark on a new chapter.

On Thursday, without so much as a word on social media, the Bennetts hung an “Open” sign in the window of their long-planned second store in Santa Fe. Two thousand miles away, in Salem, Mass., workers pushed ahead on Kakawa’s third location adjacent to the Peabody Essex Museum — a shop that has been five years in the making.

“Now that we’ve been through the learning experience of these two stores, and when we finish and get the stores open and operating, we’re going to look to expand further from there,” Tony Bennett said.

The Salem store is slated to open in October. After it does, the Bennetts will fix their gaze on two or three more markets ripe for Kakawa’s brand of rich elixirs, housemade ice cream and picture-perfect truffles. Though they declined to name specific locales, cities in Texas and on the East and West coasts are in the running.

The Bennetts bought Kakawa in 2011 when it was a smaller operation specializing in traditional chocolate elixirs, thick drinking chocolate inspired by ancient recipes.

All that extra production meant the Bennetts’ home turf on Paseo started feeling a bit cramped — or “cell-like,” as Tony Bennett described it.

“It’s a tiny little room, and it’s got two tiny little windows,” he said. “So we’re coming over here [to the new location], and it’s a much brighter space. Everybody’s really excited to be here. It’s fun for us to watch.”

Brighter, yes, and bigger. The new locale, at 1300 Rufina Circle, Suite A4, has about 1,800 square feet of production space compared to the Paseo adobe’s 600 square feet.

A retail section at the front of the shop features a locally crafted counter made of welded iron and recycled shipping pallets. Turquoise metal chairs abut cafe tables. A wooden community table serves as focal point. On the wall, Kakawa’s colorful menu offers familiar favorites — a rotating roster of sweeter European and darker Mesoamerican elixirs and organic ice creams. A display case reveals a selection of truffles and caramels. The menu will evolve as the Bennetts learn more about their new customers in one of Santa Fe’s hottest neighborhoods.

It took the Bennetts months to find the right real estate to house Kakawa’s expansion. Since they purchased the Rufina Circle spot in January, the red metal-clad building has proved more valuable than they even imagined.

“When we first bought it, we thought more about the kitchen and production aspect of it than we did the retail,” Tony Bennett said. “Now we’re like, ‘Wow, maybe it’s a better retail space than we thought it was going to be.’ ”

The Massachusetts location, housed in a 19th-century brownstone, will have its own distinct ambiance, while still boasting the same Kakawa flair, with talavera tiles, equipale furniture from Mexico and the company’s distinctive blue-and-white Oaxacan stoneware. The elixirs still will feature New Mexico piñons and green and red chile.

Peabody Essex Museum, which owns the brownstone, approached the Bennetts five or six years ago about opening the new location. Members of the museum’s board of directors regularly visit Santa Fe for meetings (the museum has a strong Native American collection), so the partnership started organically — with a taste of chocolate and an idea.

“They were like, ‘Hey, we’re getting ready to do this big addition and renovation, and you guys should be part of it,’ ” Bonnie Bennett remembered. The idea moved forward in fits and starts.

For the Bennetts, the past few months have been a whirl of activity — and a bit less sleep than usual. Still, as the scent of chocolate hung in the air, the Bennetts said the stress has been well worth it.

“What could be bad about it?” Bonnie Bennett said. “You’re making people happy. You have products that look beautiful and taste delicious. … We love it.”