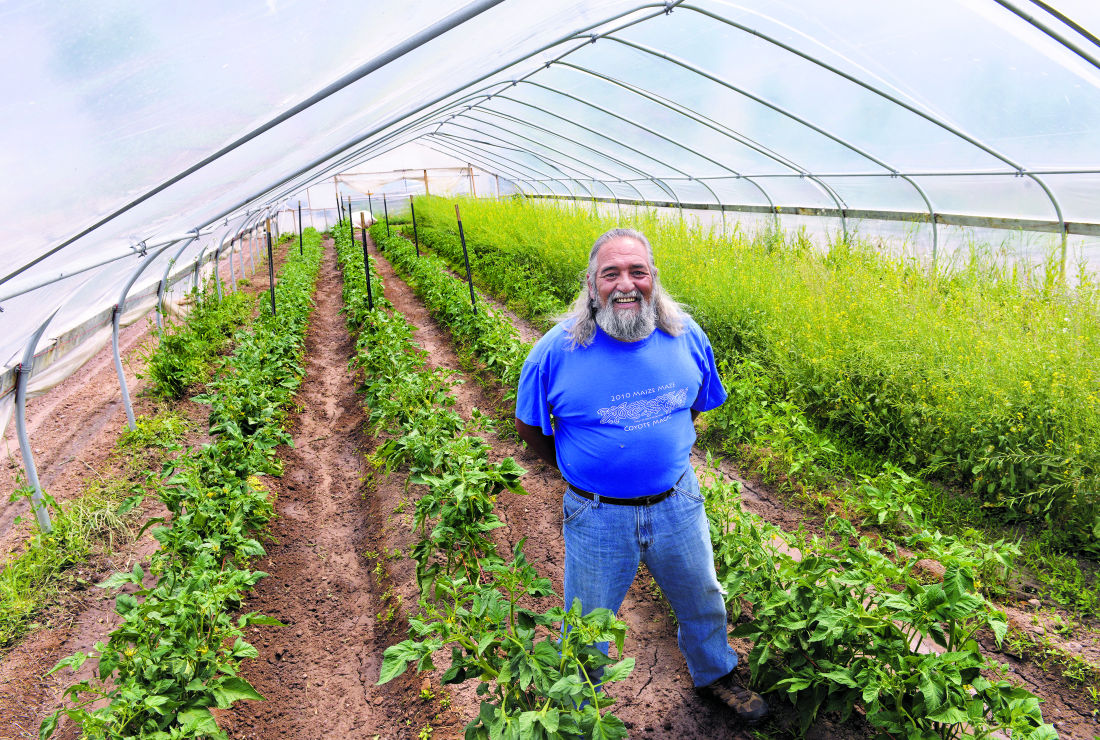 Don Bustos of Santa Cruz stands among organically grown tomatoes in a greenhouse at his farm on Tuesday. Clyde Mueller/The New Mexican 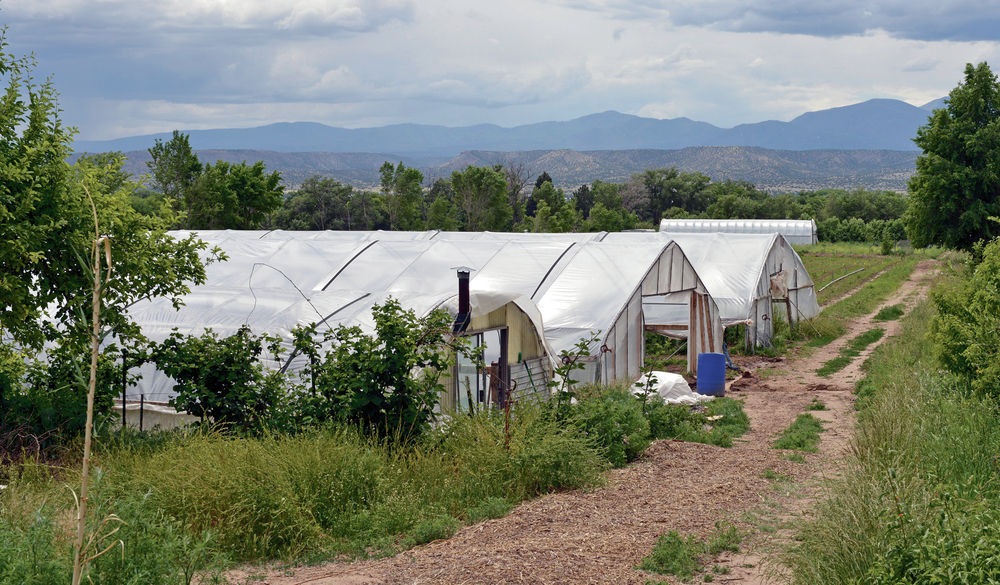 In a few fields and four cold-frame greenhouses on Santa Cruz Farm near Española, Don Bustos grows enough organic crops year-round to make a living for himself and one employee. Clyde Mueller/The New Mexican 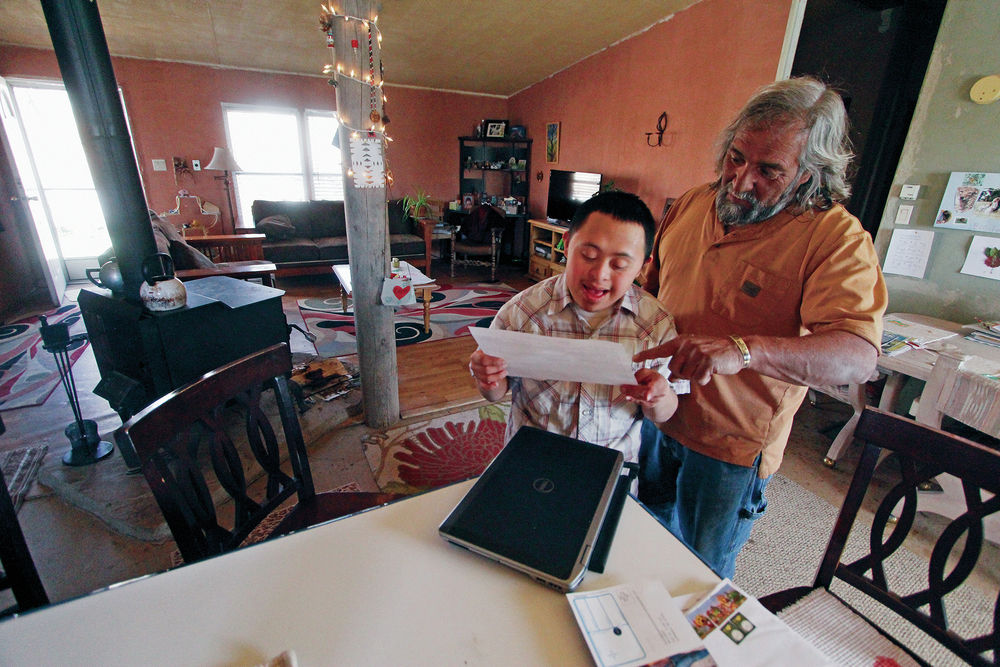 Emilio Bustos, 20, and his father, Don Bustos, are shown at their home in Santa Cruz earlier this year. Luis Sánchez Saturno/The New Mexican 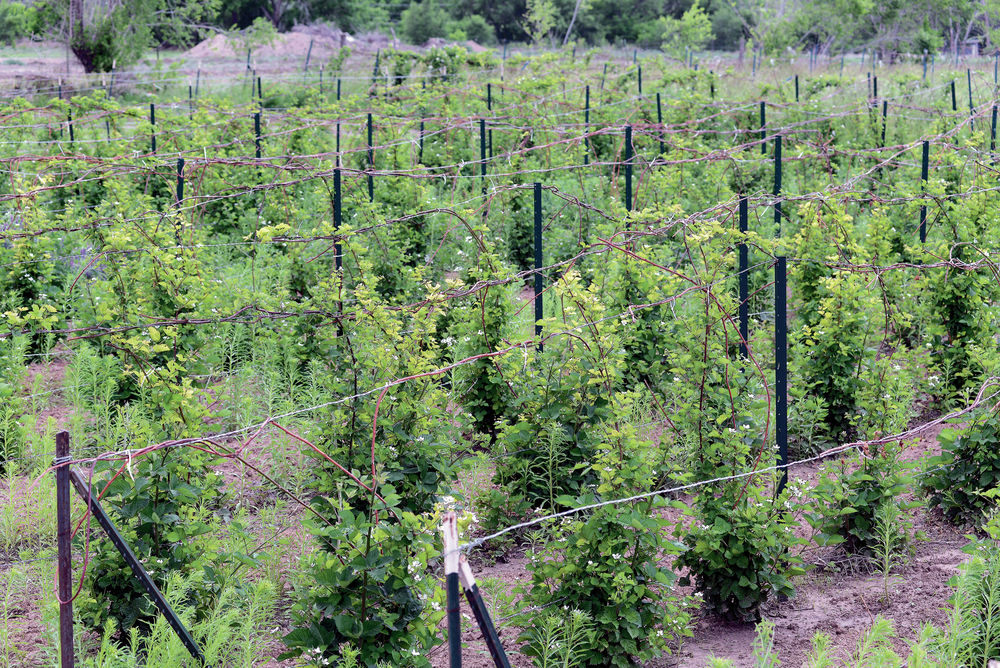 Don Bustos of Santa Cruz stands among organically grown tomatoes in a greenhouse at his farm on Tuesday. Clyde Mueller/The New Mexican

In a few fields and four cold-frame greenhouses on Santa Cruz Farm near Española, Don Bustos grows enough organic crops year-round to make a living for himself and one employee. Clyde Mueller/The New Mexican

Emilio Bustos, 20, and his father, Don Bustos, are shown at their home in Santa Cruz earlier this year. Luis Sánchez Saturno/The New Mexican

Every morning, Don Bustos walks the fields of his small farm nestled in a lush valley north of the Santa Cruz River. Rows of blackberries, heirloom tomatoes, strawberries, asparagus, lettuce and dozens of other crops line the sloping 3.5-acre property, which is divided by an acequia.

There is always weeding to be done, as well as harvesting, planting and watering. A typical day begins at 7:30 a.m. — after Bustos has his morning coffee, checks the weather report, and makes breakfast for his 20-year-old son, Emilio, who has Down syndrome. Bustos and his nephew, Nery Martinez, generally work the land until about 2 p.m. or so. It’s a two-man operation, with Martinez doing most of the selling at the market.

The farm near Española has been in the Bustos family since the 1600s. At that time, the family farmed up to 100 acres in the valley — but only owned about 20 of them. Today, Bustos cultivates just a sliver of the land his ancestors once did. But in that small scale, Bustos, 58, has found a formula for success that has allowed him to pursue other causes he is passionate about — like training others to work the land and keeping the centuries-old tradition of family farming in New Mexico alive.

Those efforts have helped Bustos win plenty of notice, most recently Tuesday, when he was named as one of five recipients of the fifth annual James Beard Foundation Leadership Awards, which recognize those “who influence how, why and what we eat.” The foundation, known for its prestigious James Beard Awards that honor the nation’s top chefs, restaurants, and other food and beverage professionals, is named after the late chef and cookbook author, who died in 1985.

Bustos, 58, was honored for “his work in support of farmers’ rights and education, and efforts to include farmers of color in the national food movement,” a statement from the organization said. The other recipients were Eliot Coleman, a farmer, author, agricultural researcher and educator; Saru Jayaraman, co-founder of the Restaurant Opportunities Center United and director of the Food Labor Research Center at the University of California, Berkeley; Sam Kass, a former senior policy adviser for nutrition for the White House; and Bryant Terry, a chef, author and food justice activist.

Bustos, who in addition to farming is co-director of the American Friends Service Committee’s New Mexico branch, runs yearlong training programs to teach other New Mexicans how to farm. Bustos also is involved in shaping state and federal legislation to better help underserved and minority farmers navigate the complex administrative world of the U.S. Department of Agriculture.

“I don’t know that this award can truly reflect what or who Don is,” said Joseluis Ortiz, a New Mexico farmer who learned his trade from Bustos five years ago. “I don’t think any award can. He doesn’t come from a place of self, he comes from a place of community.”

Bustos, a small bear of a man sporting an ever-whitening beard, chest-length hair and a constant smile, relishes his time on the farm and the lifestyle that affords him, a widower, ample time to spend with his son, whom he has cared for alone since his wife, Blanca, passed about 10 years ago.

Growing up on the property in the 1960s, Bustos spent a lot of time behind a mule, plowing the land for his grandfather. Then, like now, it seemed like a rich, natural life.

But as time passed and Bustos’ parents got older, the property became overrun with elm trees and the acequia filled with overgrowth, weeds and tree limbs. The family divided the land into four different properties — one 5-acre tract each for Bustos and his three brothers.

In the 1970s, Bustos began cleaning up the place. And in 1983, he began farming it again, relying on traditions of the past, using the sun and the acequia and some hard work to create a sustainable lifestyle. He doesn’t use newfangled technology to do it, either — though the farm does have its own website. Rather, he has built four old-fashioned hoop houses fashioned out of plastic pipes and plastic covering.

Bustos found he could make a living by replacing commodity crops — corn, pumpkin and squash, for example — with what he calls high-value organic crops that he can sell at regional farmers markets and to the public schools. He grows more than 70 varieties in all, alternating the summer crops with winter offerings including spinach, salad greens, arugula and carrots.

His financial business plan, which he passes on to others who want to run small farms, is simple: Figure out how much you need to live on every year, and then determine how many crops you need to grow and sell to make a small profit. Ten good crops can bring in $100 each per week, or $1,000, he said.

Bustos sees his choice of career as part of a “natural progression back to farming.” But it was not a career that called to him when he was young.

As a child, Bustos played on this parcel of land, located not far from the historic community church in Santa Cruz. He recalled swinging out on a rope from a treehouse — the ruins of which can still be seen — over the acequia that runs through the property below. Bustos didn’t know what he wanted to be when he grew up. Once, while struggling with a math test in elementary school, he recalled his teacher telling him, “Don’t worry Don, you’re going to end up as a carpenter at Los Alamos [National Laboratory] anyway.”

The comment didn’t bother Bustos at the time. Now it does. “Already they had you categorized,” he said.

He did go into construction, but when that business began to tank in the early 1980s, he returned to the family farm. It seemed a natural fit, he said: “There is always a calling for what you should be doing and how the land fits your health and your family traditions.”

As he learned more about the business of farming, he realized that minorities need to be more involved in shaping federal agricultural policies, including the national farm bill, to serve their livelihood. He teaches new farmers how to access community service grants and overcome what he calls roadblocks to success.

For example, for decades the Department of Agriculture was accused of discriminating against both female farmers and farmers of color when it came to accessing USDA Farm Service Agency loans. A number of lawsuits, dating back to the late 1990s, have since worked to expose and amend this practice. Bustos has worked with the state’s congressional leaders through a number of activist agencies, including the Rural Coalition (which works with underserved communities), the National Sustainable Agriculture Coalition, the Land Stewardship Program and the National Immigrant Farmer Initiative, to change the language of agricultural bills to favor those who he feels have been left out.

New Mexico Secretary of Agriculture Jeff Witte said he has watched Bustos champion farmers at the state Legislature, “talking from the heart about connecting people to the land and what it means to a local community to use water in an efficient way and grow crops that will make a community viable … that you can make a living on.”

“It’s hard to make a Don Bustos story sexy as such … but every community survives on agriculture,” Witte said.

Fidel González is learning that lesson himself. A musician by trade, he had never farmed until after he was 40 years old and took part in Bustos’ training program because he needed to find a way to make a living in New Mexico. Now González farms five small parcels south of Albuquerque, all modeled after Bustos’ small-scale model of sustainability. He believes small farmers like he and Bustos are on the rise in the state and can play a vital role in sustaining both food and the economy for the state.

Bustos said his parents, both long gone, would be proud that he’s one of those farmers.

“They are not gone. They are watching me every day,” he said as a light rain began to fall on his farm on a recent day, like a blessing from above. “They’re looking over me, making sure I don’t screw up.”