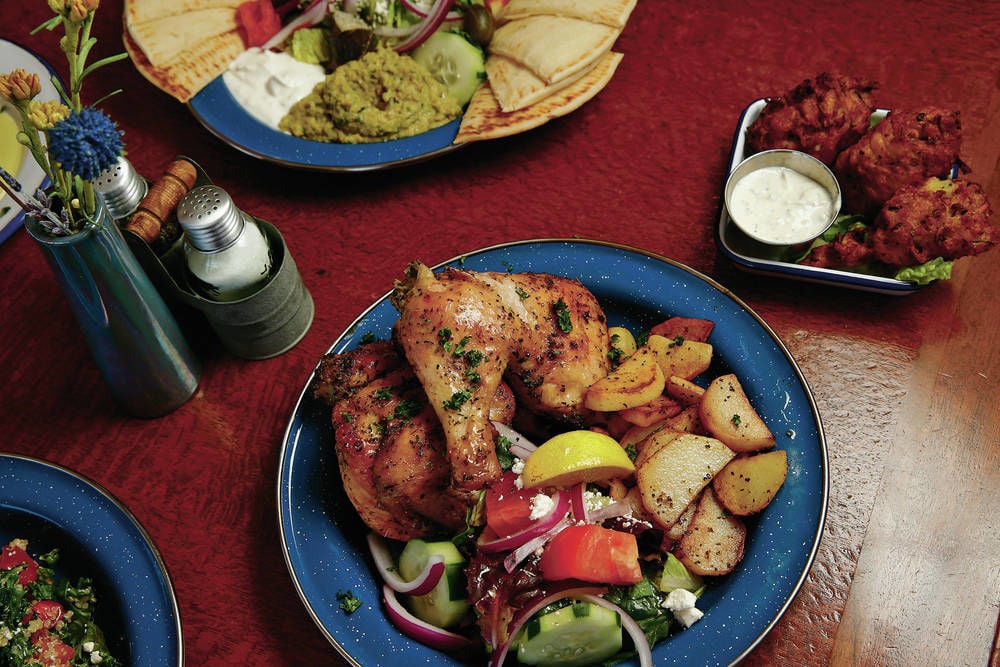 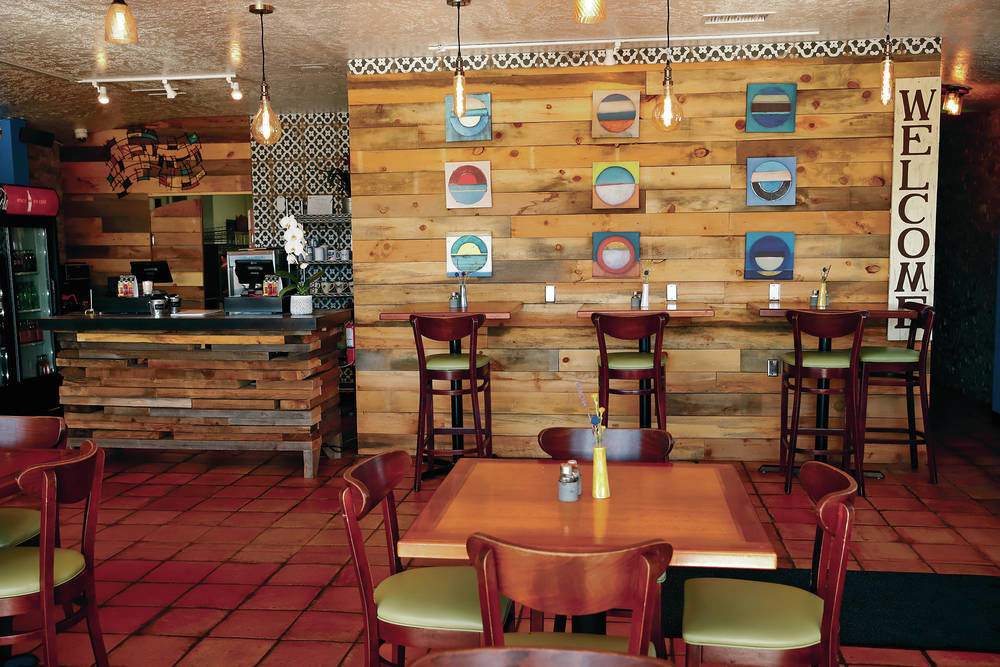 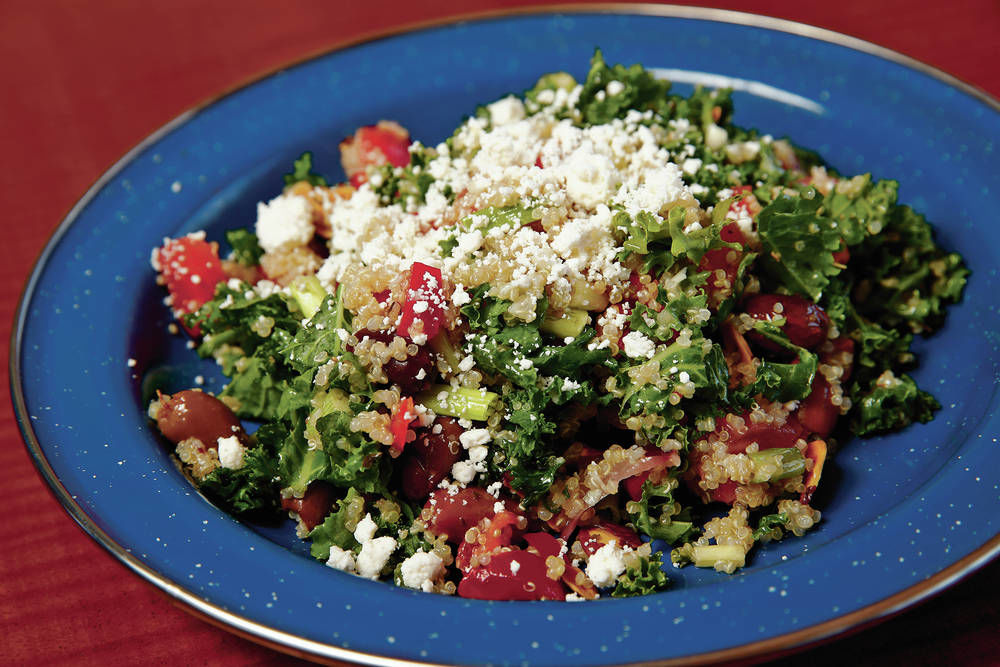 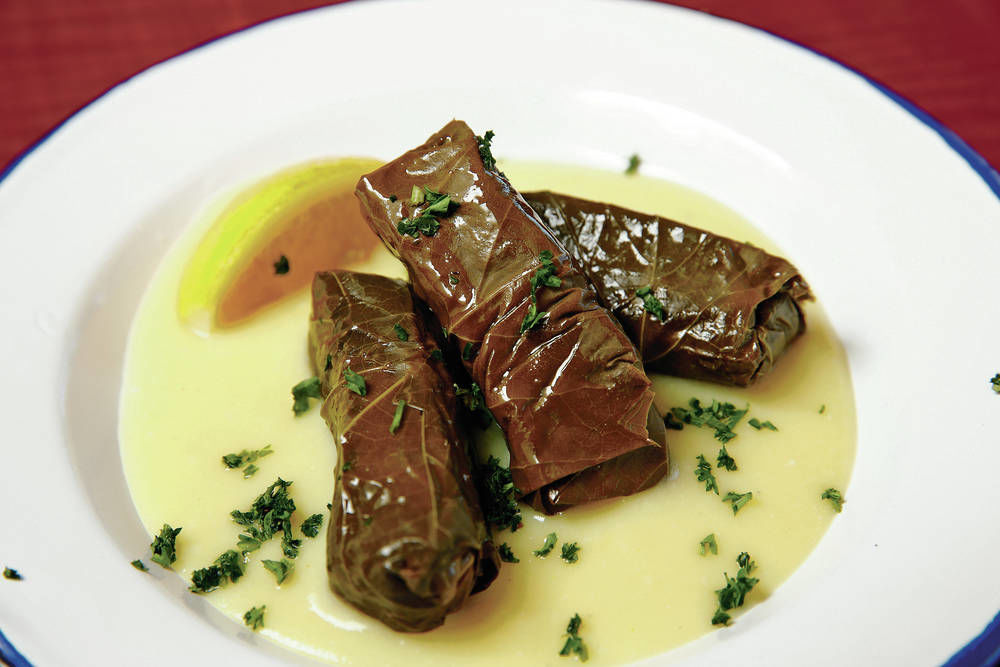 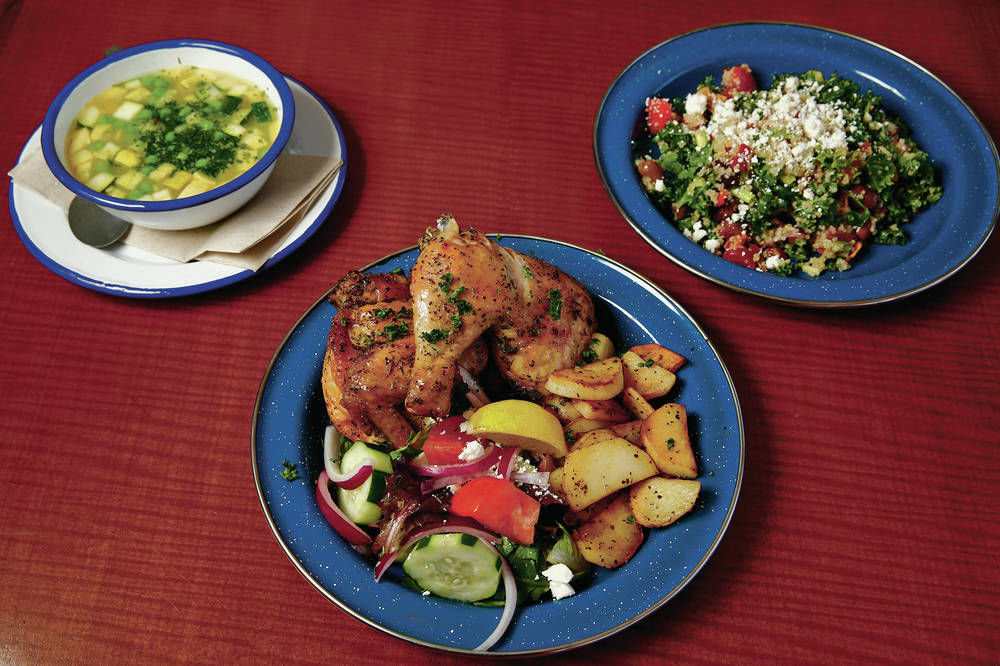 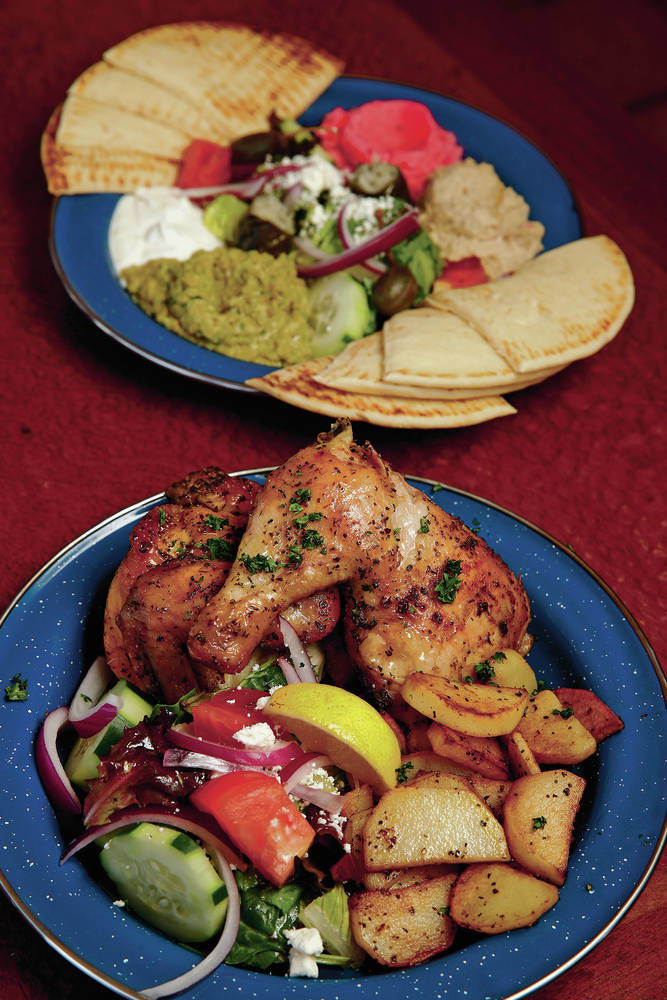 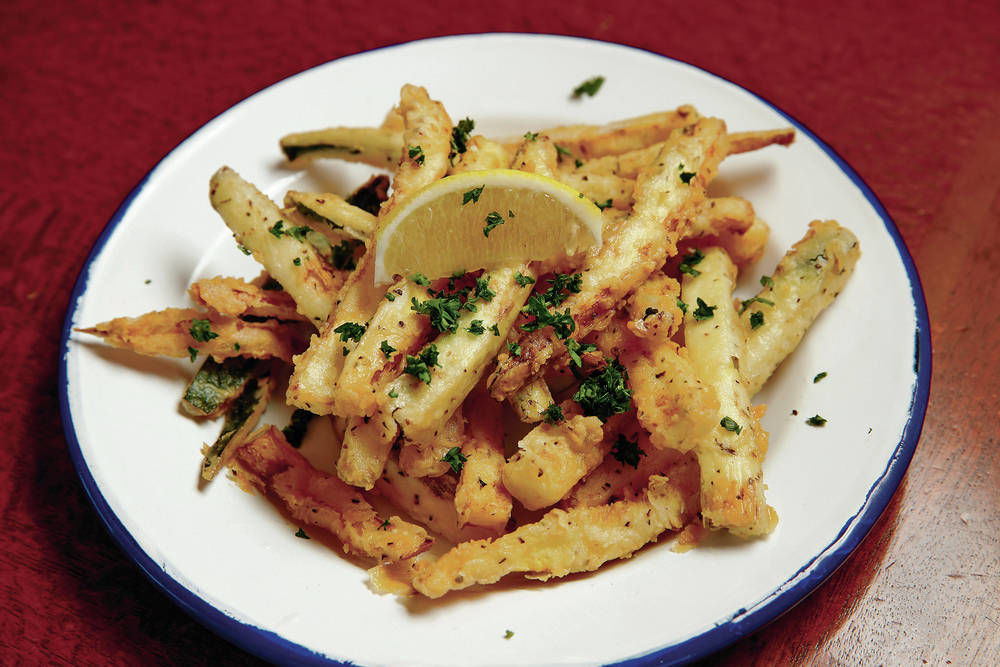 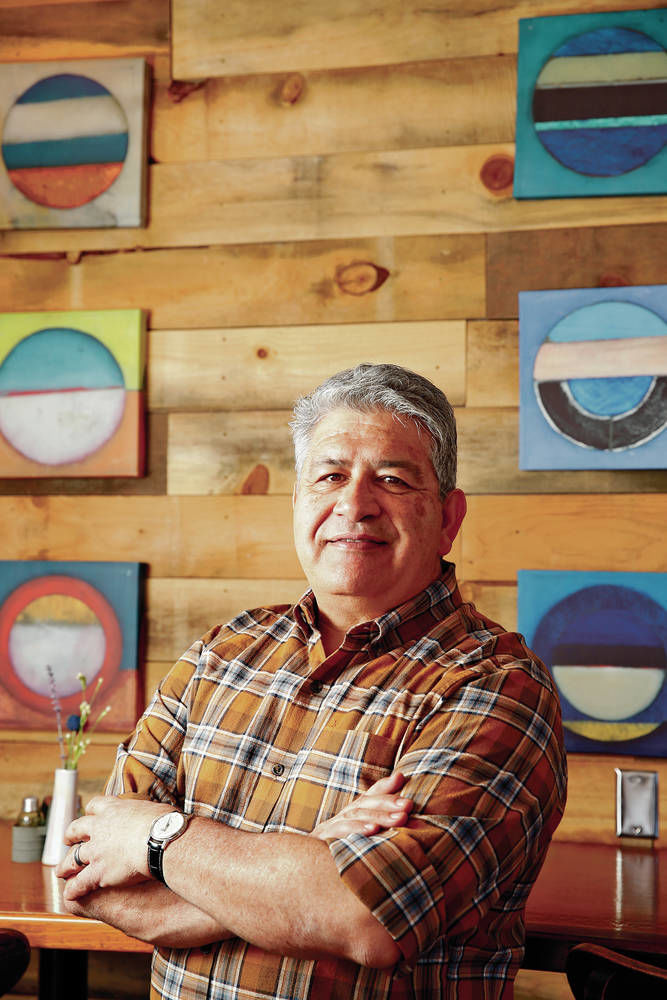 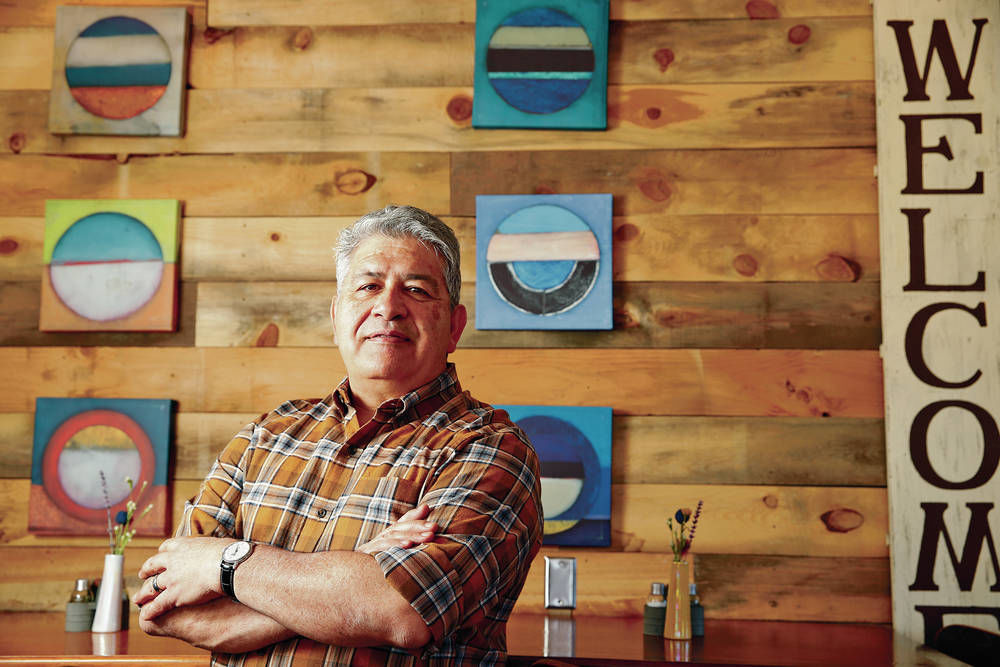 In the 1980s, Daniel Razatos urged his Greek father to add a gyro to the Plaza Café menu.

In the end, the gyro made its way into the lineup of one of Santa Fe’s oldest restaurants, with steady success over the years. And more than 70 years after his father bought the Plaza Café, Razatos is paying homage to his heritage with the family’s first fully Greek restaurant.

Yamas Greek Rotisserie, in the freshly painted white and blue former site of Lucia’s Restaurant on Cerrillos Road, offers a full menu of traditional Greek fare for a city that’s grown a much more diverse palate over the decades.

“It is a big cultural part of our family,” said Razatos, whose family also owns Cafe Sonder in addition to the Plaza Cafe. The decision to open a Greek restaurant was made as a family, he said, and the road to the Nov. 18 opening was bolstered with input from many people in the family and the community. “It’s very comforting, and it makes me feel proud to see it up and running.”

The menu at Yamas — the word is a traditional, cheery toast in Greek — stars a lineup of six pita sandwiches: gyro, chicken, falafel, lamb, pork and beef steak ($7 to $9.50). They come with lettuce, tomato, red onion and your choice of three tzatziki sauces. The most traditional option blends yogurt with garlic, cumin, dill and lemon, while a spicy version adds roasted jalapeños and a red tzatziki combines tomato, cumin, paprika, cayenne pepper, garlic, cilantro, parsley and olive oil.

You’ll also find plenty of classics here, from hummus, spanakopita and stuffed grape leaves to rotisserie plates and Greek baked dishes like moussaka (a casserole made with eggplant, potato, spiced meat and bechamel sauce) and pastitsio (baked pasta with meat and cream sauces and cheese).

Desserts ($5 to $7) include baklava; a butter cake topped with Greek yogurt and honey; and frozen Greek yogurt topped with cherries or crumbled baklava, a refreshing balance of sweet and tangy.

Business has been steady, Razatos said. At lunchtime on a recent weekday, a wide range of diners filled most of the dozen warm wood tables and a small strip of bar stools against a back wall: Couples chatted as a solo patron held his sandwich over an e-tablet; women in fedoras and flannel sat near a multigenerational group that had pushed tables together and grabbed a highchair for the youngest among them.

Greek music creates a lively counterpoint to the dining room chatter, and rustic tile flooring complements slate-colored brick and wood walls with bold blue accents. Sleek pendant lighting and an assortment of abstract art and botanical prints give the space a contemporary twist.

The Razatos family, of course, knows how to build restaurants that draw a loyal following. The Plaza Cafe on Lincoln Avenue has been owned by three successive Greek families since 1905. The elder Daniel Razatos had a job there in the early 1930s and became owner in 1946. One of his sons opened Plaza Cafe Southside in 2003, and the younger Daniel Razatos opened Cafe Sonder in the old Zia Diner space on Guadalupe Street in 2016.

Razatos said he wishes his father, who died in 1997, were alive to see customers filling the seats at Yamas — but that the restaurant is a testament to his legacy and a reminder of that early debate over whether Santa Feans would embrace their family’s native cuisine.

“I think about that conversation all the time,” he said. “His heritage and culture is here in this new restaurant, and it would make him proud to see that, and how far Santa Fe has come.”