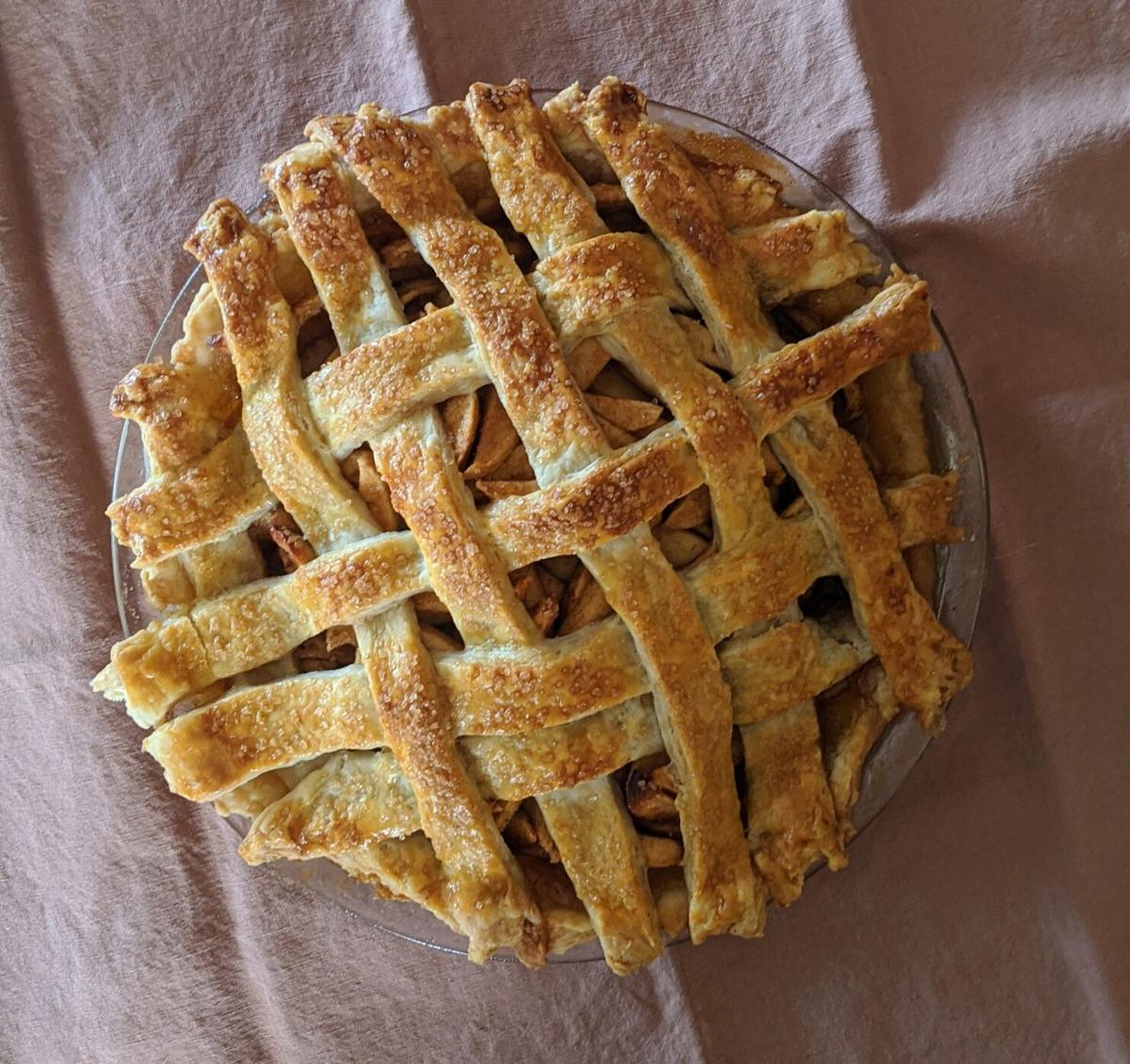 Apple pie with a lattice crust, above. Blind bake the crust for your pumpkin pie using beans or lentils, below. 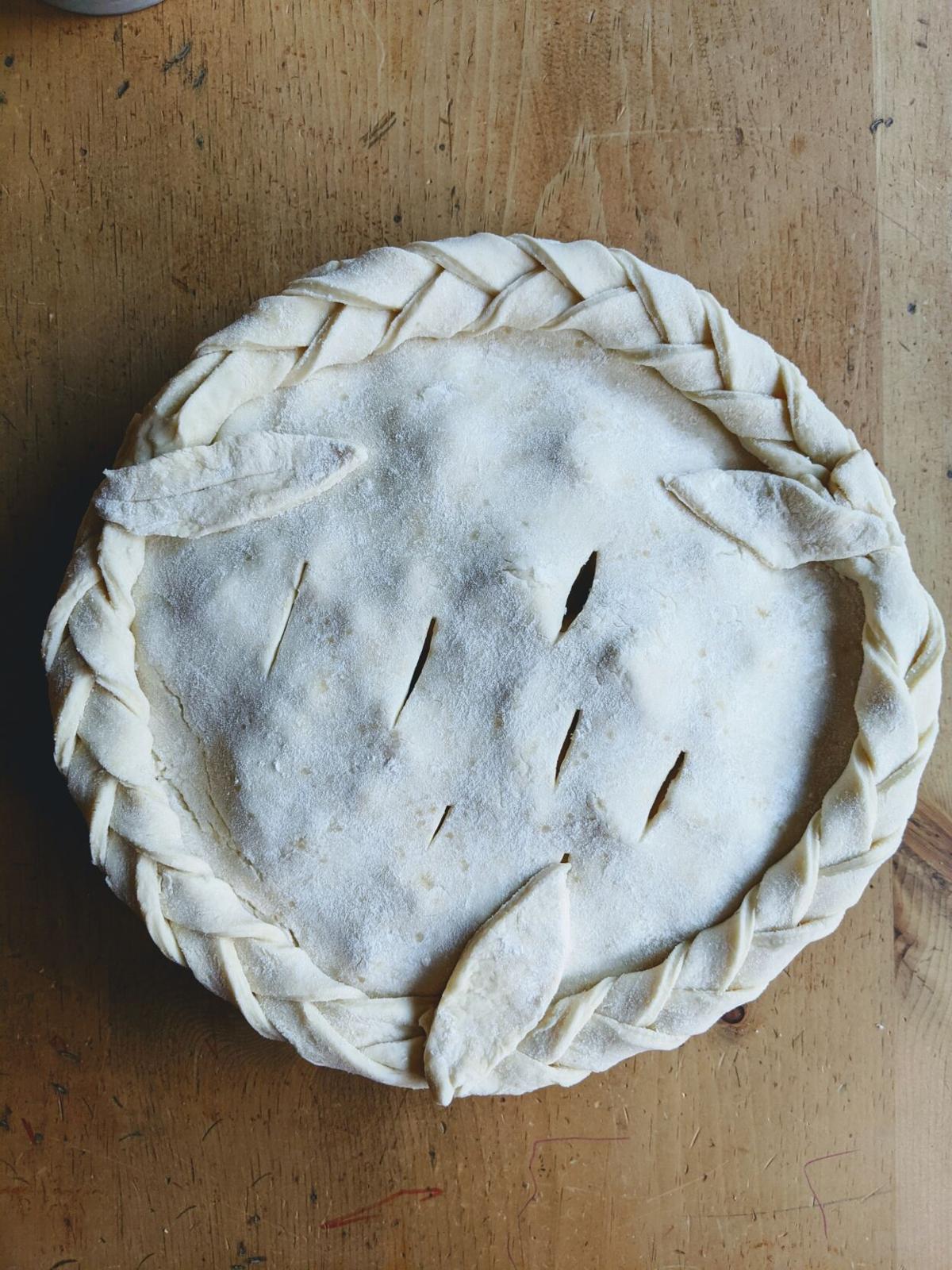 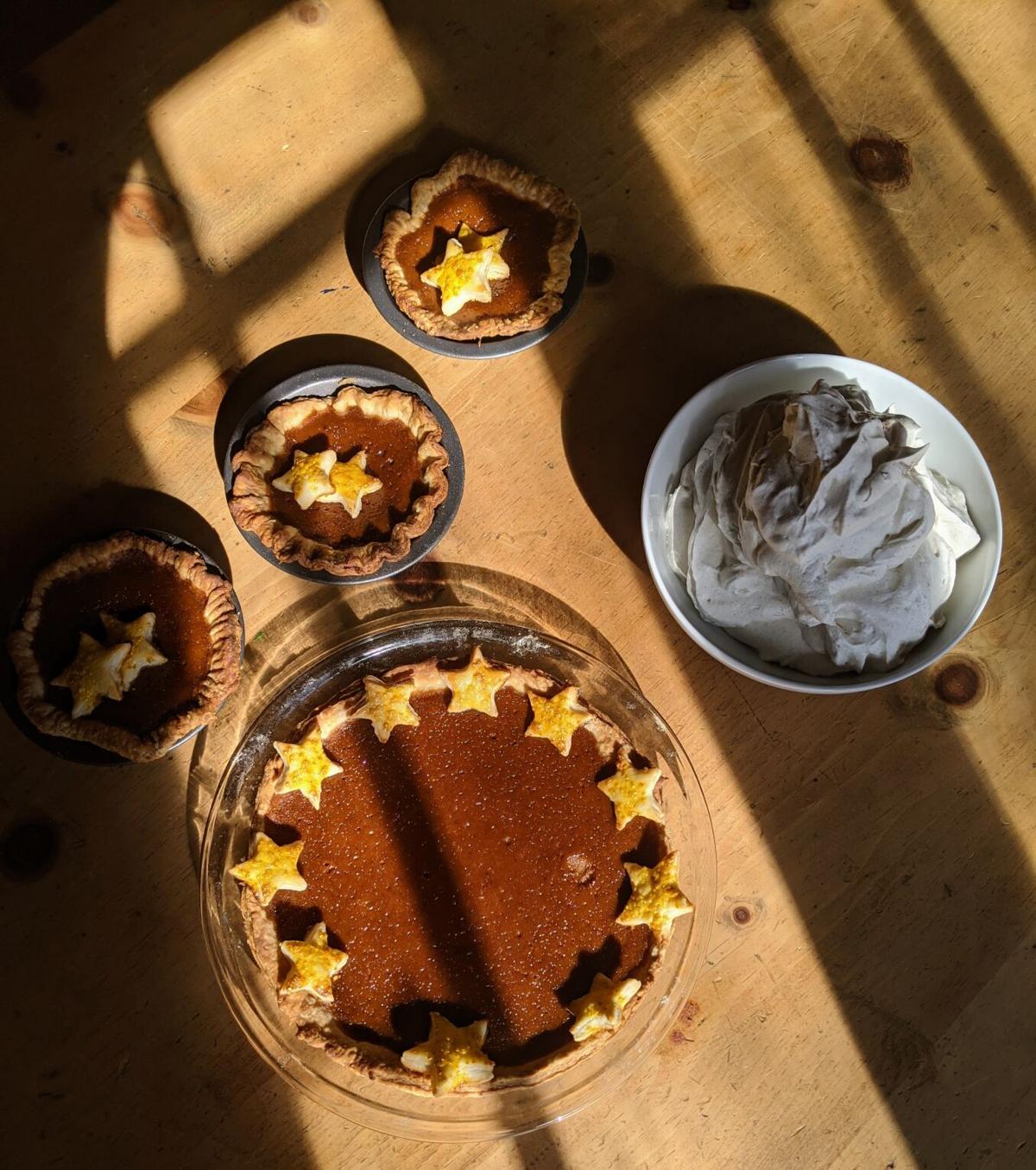 Pumpkin and chile pie with maple and cinnamon whipped cream. 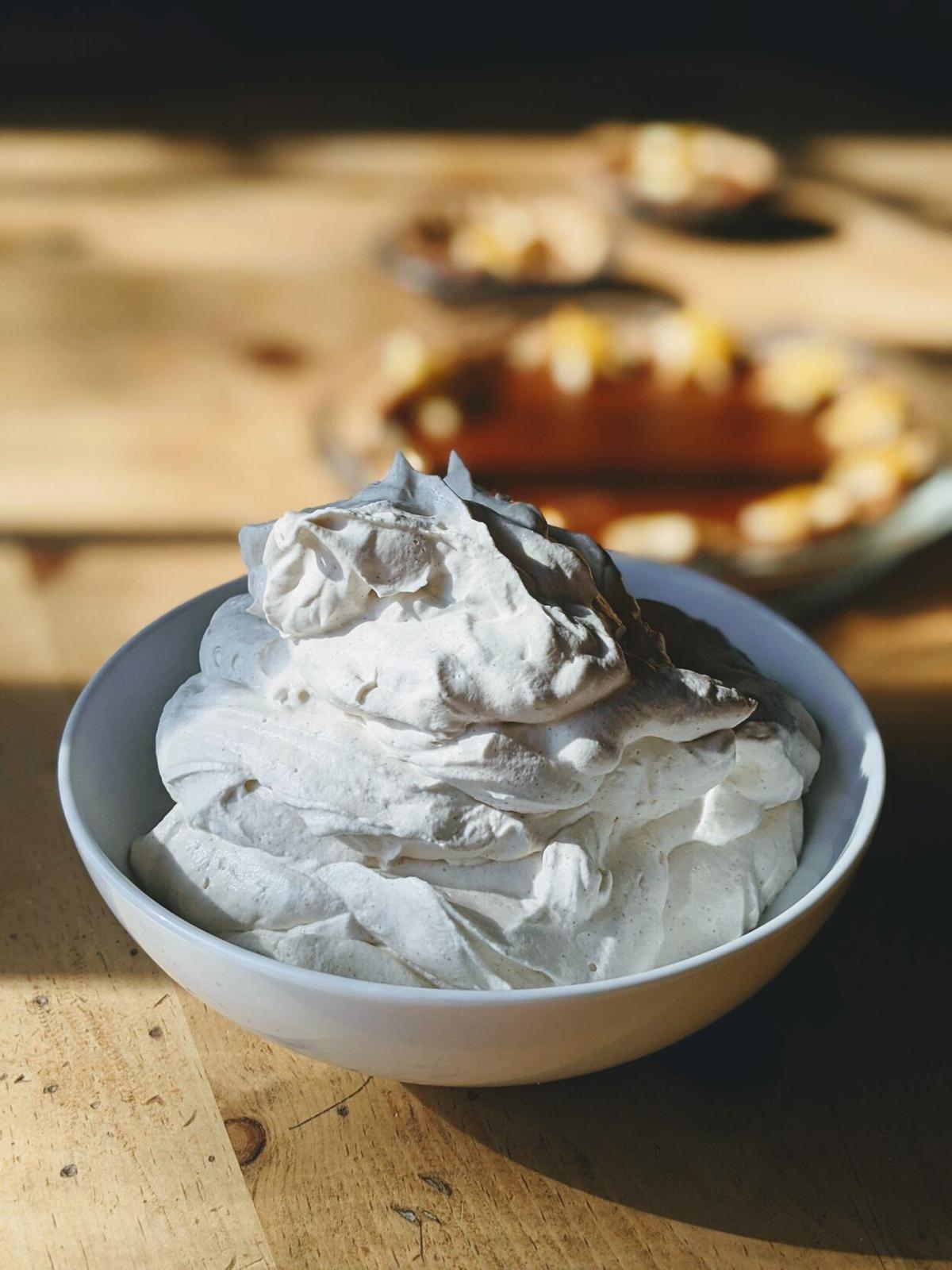 To top your pies: maple and cinnamon whipped cream. 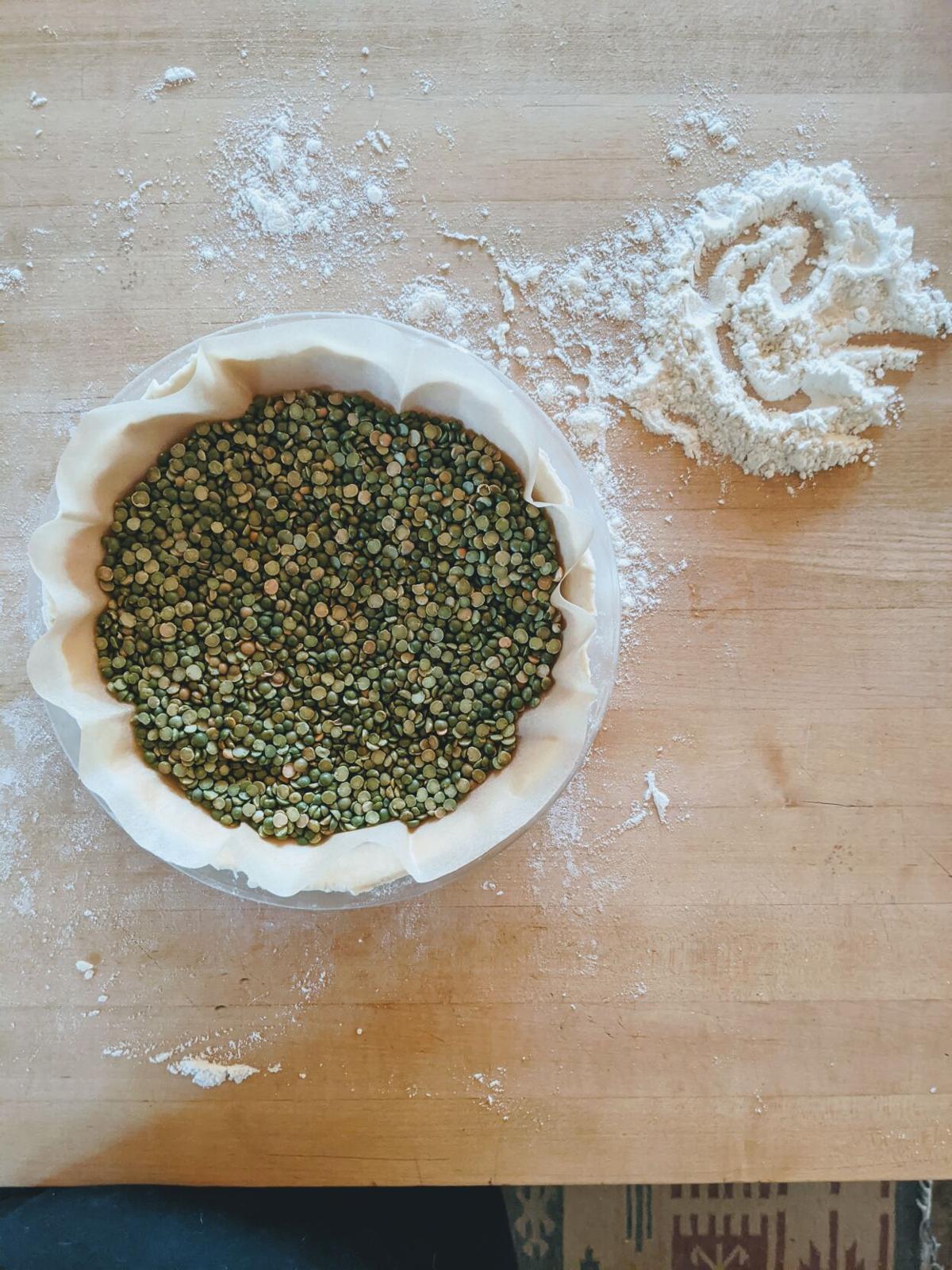 Blind bake the crust for your pumpkin pie using dried lentils or beans. 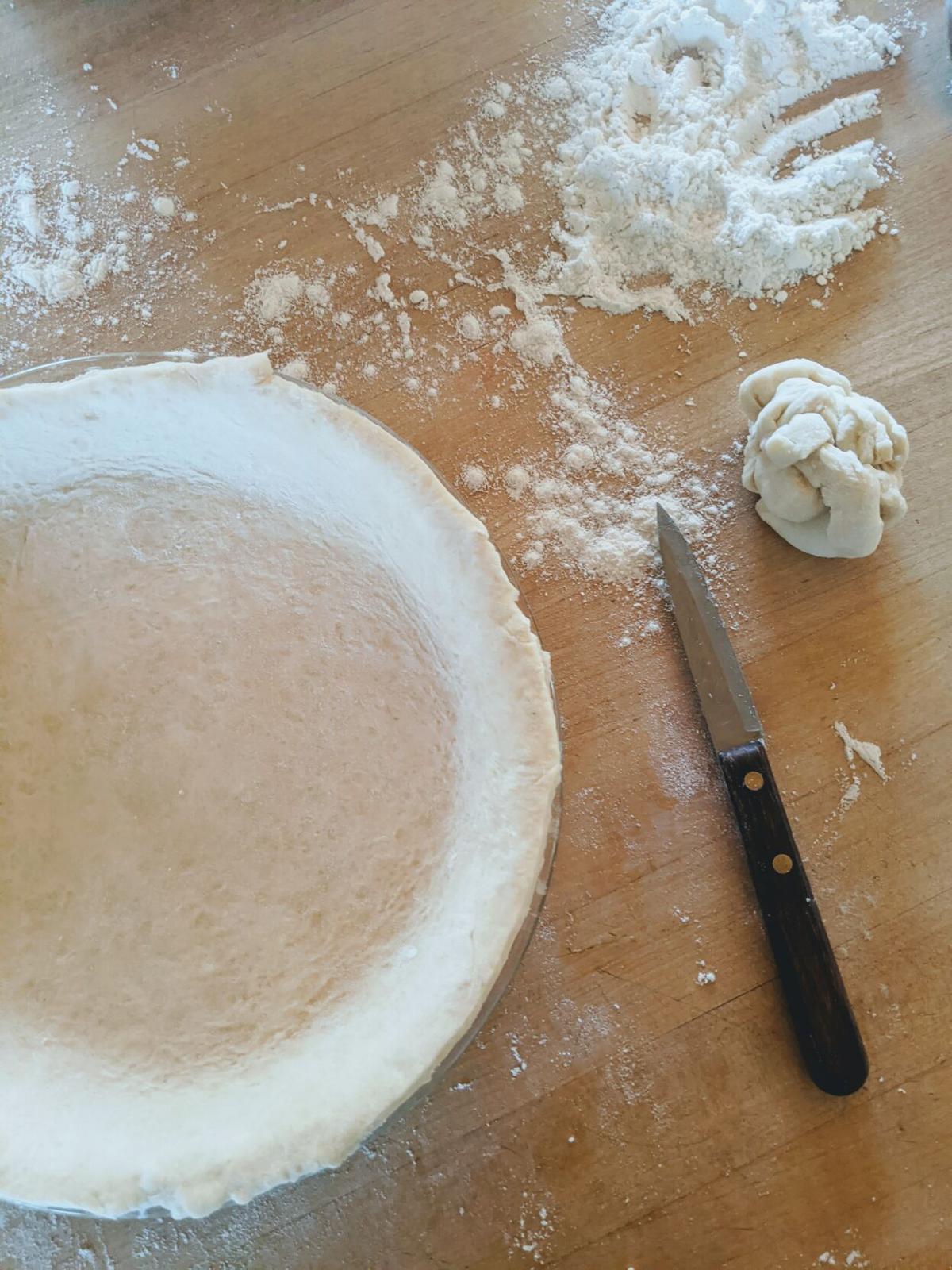 Making your own pie dough is a little extra work, but it’s worth it. 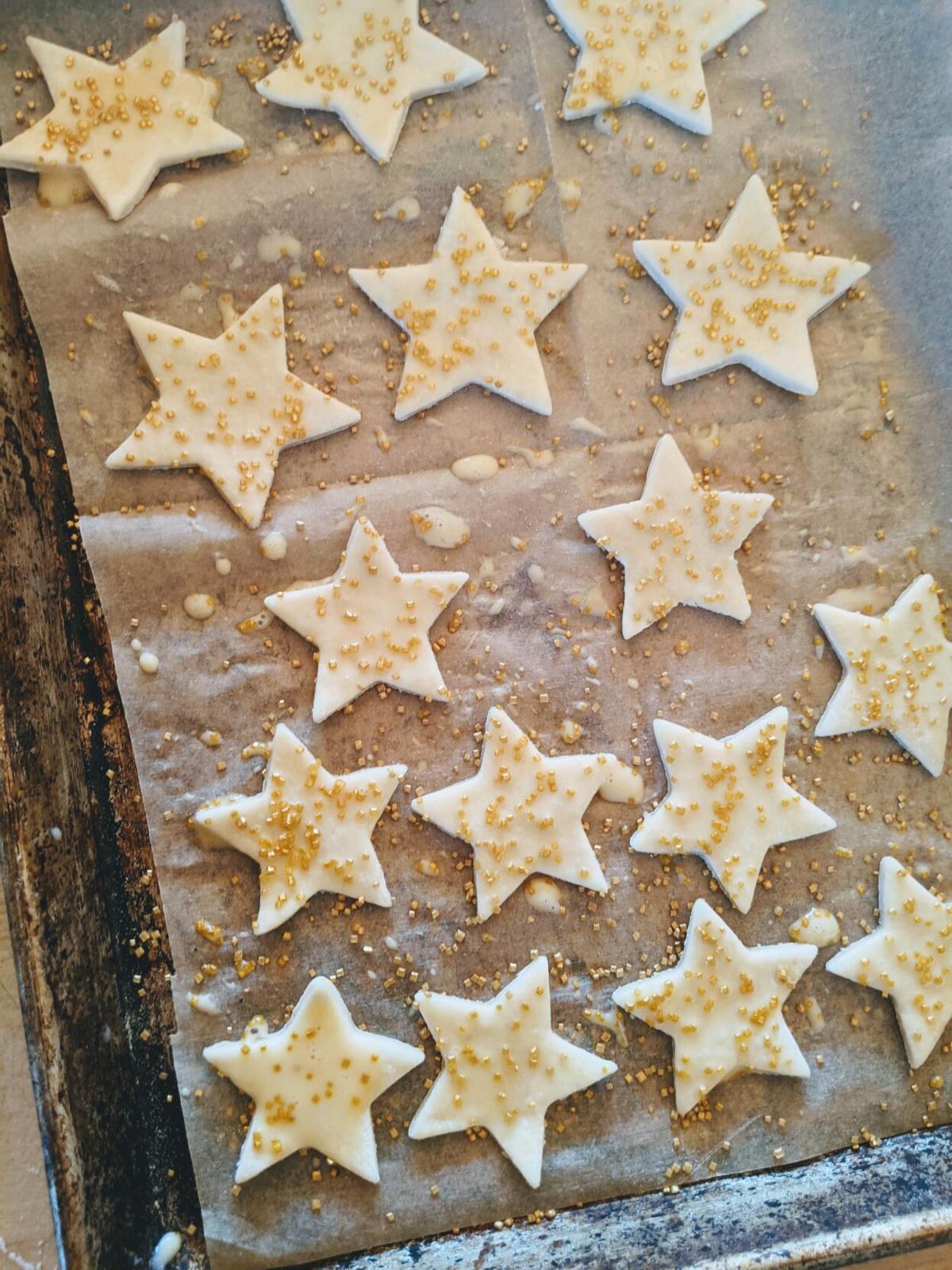 Use extra pie dough for decorations or for cookies that go great with coffee or tea. 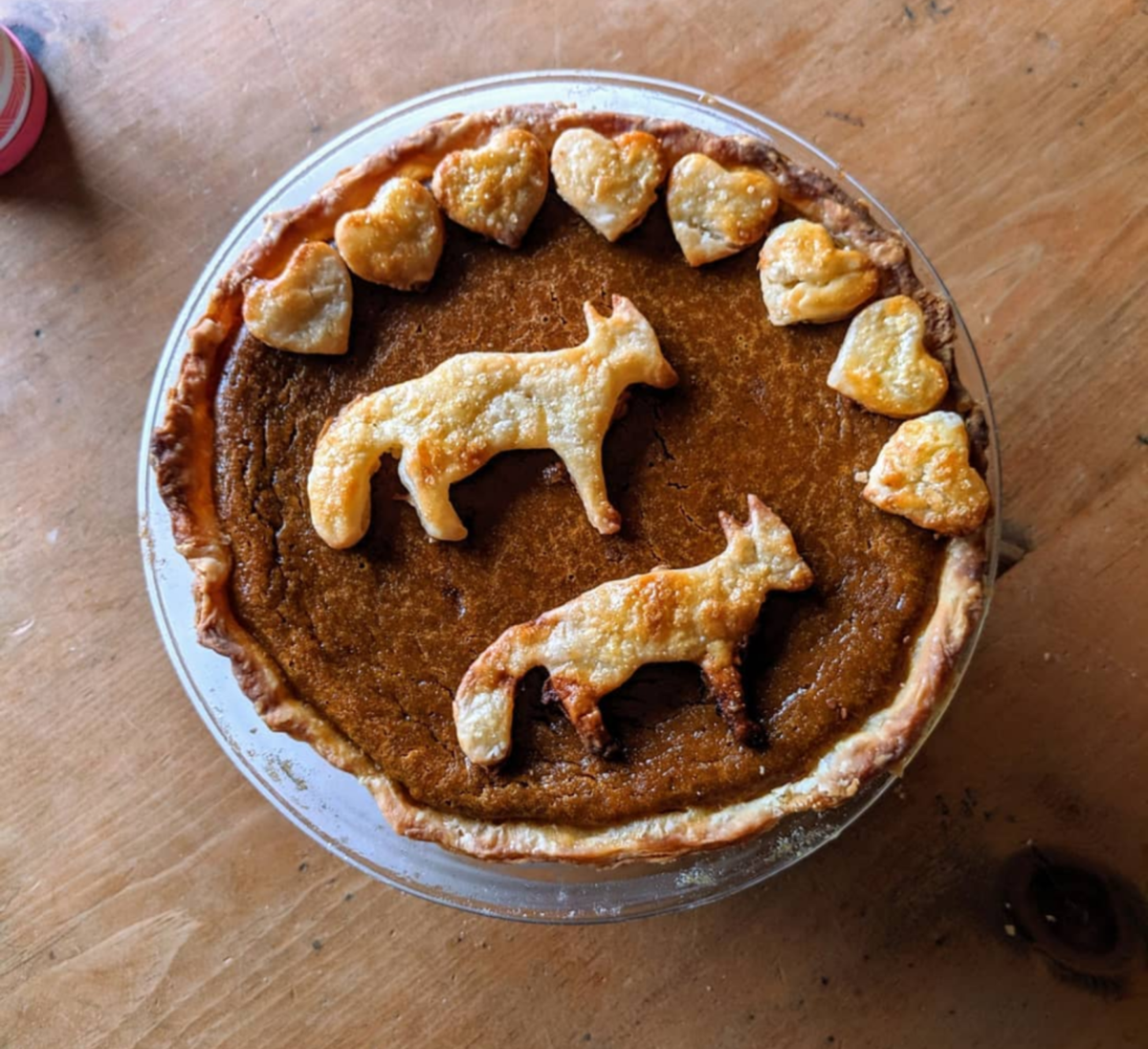 Making holiday pies can be fun for the whole family, including your little ones.

Blind bake the crust for your pumpkin pie using dried lentils or beans.

Use extra pie dough for decorations or for cookies that go great with coffee or tea.

Making holiday pies can be fun for the whole family, including your little ones.

With Thanksgiving only a couple weeks away, this is a good time to get your holiday pie plan in place. Even if you’re cooking for a smaller group than normal, the amount of effort required doesn’t change that much from cooking for two people to cooking for six. It’s still the same amount of fridge space, dirty dishes and cooking time. The only thing that shifts is the quantity of ingredients. So if the idea is to relax on Thanksgiving day, let’s make it as easy as possible. I would suggest making the dough a week before you want to make the pies.

One of the best ways to get a head start is to decide what pies you want to make and make your pie dough ahead of time to store in the freezer. If you don’t feel like making pie dough this year, it’s OK! There are plenty of options in the frozen grocery aisle, and the pie fillings in these recipes will work just as well. If you choose to make this pie dough recipe, I can promise it won’t disappoint — and most likely someone around the table will mention it’s the best pie dough they have ever tasted.

This recipe is only slightly adapted from The Hoosier Mama Book of Pie by Paula Haney. During my years working as a cook in Chicago, I was lucky enough to enjoy her pies at her shop and wherever they would pop up around town; once at a wedding where to everyone’s delight, instead of a traditional wedding cake, they served a lavish spread of Hoosier Mama pies all stacked up in their white boxes on the buffet. The wedding was beautiful, but the pies stole the show. I have used and tweaked this recipe over the years for meat pies, fruit pies, hand pies, tarts and galettes. When it comes to sweets, this recipe has become a trusted friend.

So why is this crust so dang good? Yes, it’s the butter (of course). It’s also widely believed that the addition of vinegar stops the gluten from developing and toughening the dough. I have read differing opinions on this, but it seems to work for me and why mess with a good thing? All-purpose flour will give you a classic crust, but you could also use whole wheat flour, which will result in a hearty, nutty flavor.

And if you have leftover pie dough, which is almost always the case, I highly recommend making dough “cookies.” Roll out chilled leftover dough, cut into fall shapes like leaves, pumpkins or abstract shapes, brush with an egg wash (an egg whisked with a splash of milk) and sprinkle with cinnamon and raw sugar. Bake for around 12-15 minutes until golden brown. These little cookies can be used to decorate the top of your pies or are lovely to snack on with tea or coffee.

Here are the two pies I make each year on Thanksgiving for my family. They are simple, the cinnamon maple whipped cream works for both and they make people happy. I’d call that a bit of holiday magic.

¾ cup ice water, depending on need

Preparation: Cut butter into small cubes and put in the freezer. In a cup, mix the ice water and vinegar and set aside (to keep the water icy cold, sometimes I throw in an ice cube if my kitchen is warm). In a large bowl, whisk together the flour, salt and sugar. At this point the butter should be super cold but not frozen. Remove butter from the freezer and add to your flour mixture. Using your fingers (or a food processor) squeeze the butter pieces into the flour until the butter is incorporated into the flour and resembles small peas. Add ½ cup of the vinegar and water mixture. Stir with a rubber spatula. At this point, the dough will probably be crumbly. Continue adding and mixing in a tiny bit of vinegar-water at a time just until the dough comes together. Cut into two pieces, shape into round discs, wrap each piece in plastic wrap or parchment paper, and cool in the fridge for at least 1 hour or up to 3 days. If you want to keep longer, freeze for up to two weeks and thaw the day before you want to use it.

3 pounds apples, firm semi-tart apples or a combination of sweet and tart, peeled, cored and diced.

1 tablespoon sugar in the raw

Preparation: Preheat the oven to 350 degrees. On a lightly floured surface, roll out half the dough into a large round, big enough to easily sit inside your pie dish and over the rim by a half an inch. Use a small knife to even out the border. Using a fork, poke holes in the bottom of the pie. Place the pie dish in the freezer until ready to use. In a large bowl, gently stir together the apples, lemon juice and zest, cinnamon, lavender, vanilla, brown sugar, flour and butter. Now roll out the top crust. At this point, you can leave intact or cut into strips if you want to do a lattice top. Remove the pie dish from the freezer, fill with the apple filling and lay the top crust on. Crimp the edges with the flat side of a fork or crimp with your fingers for a more ribboned effect. If you leave the top dough whole, just be sure to cut a few slits in the top to let steam escape. In a small bowl, whisk together the egg with a splash of milk. Brush the top crust with the egg wash, sprinkle generously with sugar and bake until golden brown 55-65 minutes. Let cool to room temperature before slicing.

1 piece of parchment paper, cut into a circle that nests into and up the sides of your pie dish

2-4 teaspoons red chile powder, depending on heat and preference

Preparation: Preheat the oven to 425 degrees. Because this is a “custard” type of pie filling, we need to blind bake the crust. All this means is that we bake the bottom crust ahead of time so it doesn’t end up soggy: On a lightly floured surface, roll out half the dough into a large round, big enough to easily sit inside your pie dish and over the rim by around an inch. Use a small knife to even out the border. (Save any extra dough for pie dough cookies or mini pies). Fold the excess dough under so it sits evenly around the border of the pie dish. Crimp the edges with the flat side of a fork or crimp with your fingers for a more ribboned effect. Using a fork, poke holes in the bottom of the pie. Place the pie dish in the freezer for 20 minutes.

While the dough is freezing, whisk together the pumpkin, eggs, brown sugar, pumpkin spice, black pepper, kosher salt, red chile powder, heavy cream and vanilla. A note on the chile powder: How much you use depends on your heat preference. I usually use 2 teaspoons mild red chile powder and 1 teaspoon of medium. This gives a noticeable gentle heat that we love, but it’s up to you.

Now it’s time for the blind bake: Remove the pie dish from the freezer, place the parchment paper round in the bottom and pour in your pastry weights. Beans and lentils work well and can be reused over and over again as long as they’re kept clean and dry. Place in the 425-degree oven for 15 minutes. Remove the weights and parchment paper carefully and bake for an additional 15 minutes.

Remove pie dish from the oven and lower the oven temperature to 350 degrees. Pour in the pumpkin filling and bake for 50-60 minutes, or until the filling is set with a slight wobble in the middle. While the pie is baking is a perfect time to bake any pie dough cookies you want to use for decoration or snacking. Just be sure to brush with a bit of egg wash and a sprinkle of raw sugar before baking until golden brown (12-15 minutes). Once the pie comes out of the oven, let it cool to room temperature before decorating with pie dough cookies and/or slicing.

Preparation: Put the large bowl in the freezer for 10 minutes. Remove the bowl from the freezer and, using a large whisk, whisk together heavy cream until soft peaks form. Add the maple syrup and cinnamon and whisk until medium firm peaks form. Transfer to a bowl and serve with pie and/or coffee.