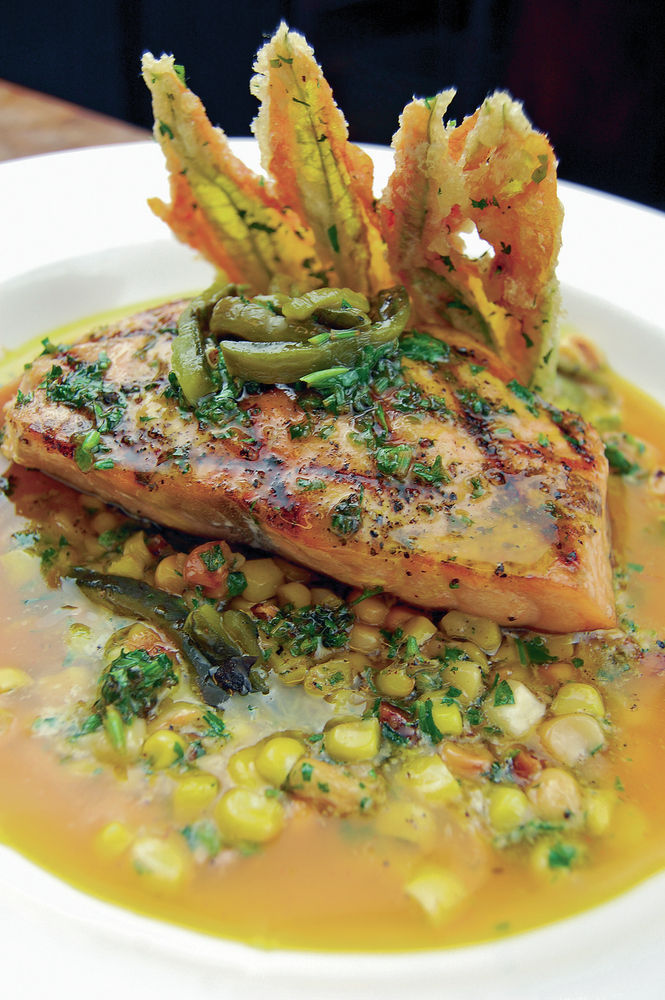 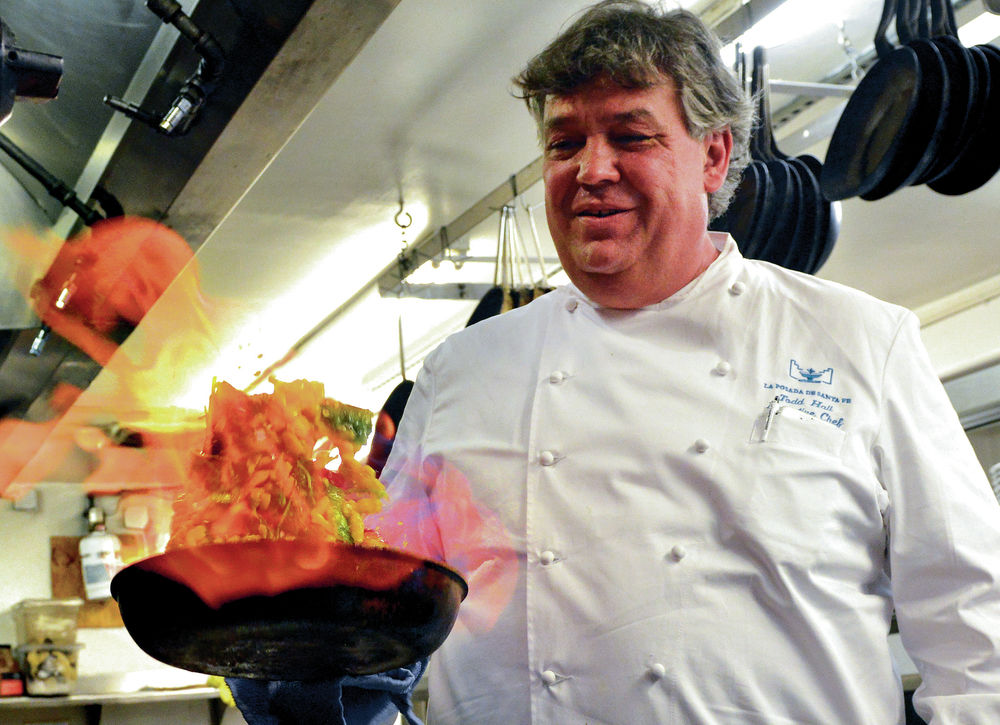 A nod to Julia Staab herself, the skillet-seared foie gras starter is paired with gingered brioche toast and grilled apricots from the century-old apricot tree on the La Posada property. Courtesy of Todd Hall

A favorite local haunted hotel and Christmas gathering spot, La Posada de Santa Fe has struggled to have a really significant food scene. But as of last week, after a major overhaul, it has brought us not one but two new watering holes: Viga, a bar and gastropub, and Julia, the latest incarnation of its fine-dining restaurant.

Julia (formerly Fuego) has been totally renovated, with a new layout that includes a long community table, which creates a dinner-party atmosphere. Julia is also the third restaurant to open in the past year named after a deceased Santa Fe lady — this one named after Julia Staab, the doyenne of the home that became La Posada hotel and whose ghost, supposedly, still haunts the property.

Proof of La Posada’s new commitment to gastronomic significance is the hiring of Todd Hall, a bona fide celebrity chef. Hall, precociously successful at a very young age, competed in the prestigious Bocuse d’Or competition at the age of 25 and won himself a James Beard Award for Best Hotel Chef in America (with another Beard nomination for rising star chef of the year).

Hall isn’t trying to make the fanciest enchilada or bespoke fusion taco in town — indeed, he isn’t serving those things at all, though he’s known for the four-star Mexican food he served at The Prado at Balboa Park in San Diego; Adobe Grill in La Quinta, Calif.; and most notably, the wildly popular Temazcal Tequila Cantina in Boston’s Seaport District.

But Hall has a propensity for giving people what they want and don’t have (like a Mexican restaurant in Boston), and because Santa Fe has many upscale enchiladas to choose from, Hall went a different direction with the menu for Julia, creating a distinctly continental bill of fare with very light touches of Southwestern flavor dusting a few of the dishes.

The emphasis for Hall is on the ingredients themselves, lovingly selected, prepared fairly simply, and paired to their advantage, much of it harkening back to Hall’s classical French training. “I buy really good products and try as hard as I can not to screw them up,” laughs Hall, who despite the accolades has a distinctly un-fussy approach to fine dining.

The current starter menu (and the menu will change often, according to season) includes beef tartare with a quail egg and grain mustard plated in Hall’s distinctive lattice potato cup, and a wee chorizo stuffed quail — dishes that fly or die by the quality of their ingredients.

Julia is also poised to be the place to go for fine-dining comfort food, with entrées like half chicken cooked under a brick (aka poulet mouton) served with saffron spaetzle, little fried German egg dumplings poised to soak up the accompanying pan jus squeezed out by the brick. Or have the hen baked in Santa Fe red rock clay, and enjoy the theater of having the clay broken open and your chicken freed for your enjoyment right there at your table.

Hall also includes some unusual ingredients in his dishes, because a bored taste bud is a dead taste bud. The smoked pork tenderloin (smoked in La Posada’s original adobe smoker) is served with Humboldt Fog goat cheese streaked with edible white ash. The sautéed veal tenderloin comes with a Meyer lemon purée prepared according to the bizarre process of peeling lemons and then blanching and shocking them over and over to remove the acids and toils, and then puréeing the rind and adjusting the pH until it’s perfect.

Julia’s already-popular dover sole dish is served with samphire, or sea beans, which grow in marshes and are featured on many dishes in the United Kingdom, but not so many stateside. And, as with everything, the emphasis is on technique and quality; Hall cooks the fish on the bone so that the protein and collagen melt into the fish, and then removes it from the bone to order with an exceedingly simple sauce.

But if it’s not dinnertime or you don’t feel like eating with your napkin on your lap, you can walk in the door just to the right of Julia and eat at Viga, the new bar created out of what was formerly a mostly disused special event space adjacent to the patio.

Viga is Julia’s dressed-down little sister, fruit of the same tree but with a lower price point and a casual atmosphere. The interior space is small, lined in dark wood and dominated by a long rustic wood table going down the center, like a Hobbit bar, opening out to La Posada’s famously verdant courtyard.

Viga’s bar menu is available all day, serving solid gastropub-style comfort food including a suite of burgers, French onion soup, a crab cake sandwich and a hand-chopped tuna burger with peppadew pepper dust and wasabi mayo. Already popular, according to Hall, is Viga’s classic French croque-monsieur, a crunchy fried ham and cheese sandwich served with a side of tomato soup and a little creamy bechamel sauce. Viga also has a couple of lobster-heavy items on the menu, a nod to Hall’s years in Boston: lobster roll sliders and lobster guacamole served in its own stone molcajete.

And as a nod to Julia herself, the skillet-seared foie gras starter is paired with gingered brioche toast and grilled apricots from the century-old apricot tree on the La Posada property supposedly given to Julia Staab by Archbishop Jean Baptiste Lamy. One can only assume she herself would approve, so if a little foie gras goes missing every night, it just goes to show that even a ghost can appreciate a good appetizer.

Through addiction and personal tragedy, star chef Todd Hall cooked his way to the top

Through addiction and personal tragedy, star chef cooked his way to the top

“I never wasn’t a good cook,” says Todd Hall, the new chef at La Posada. “I could smoke crack and do a Chaine des Rotisseurs dinner beautifully. I was born to do this. It always came so easily to me.”

Good to hear they're trying something different. Had Thanksgiving dinner there. When I go someplace like this, especially for that price, I generally leave thinking it was one of the best meals I've ever had...definitely not this time.